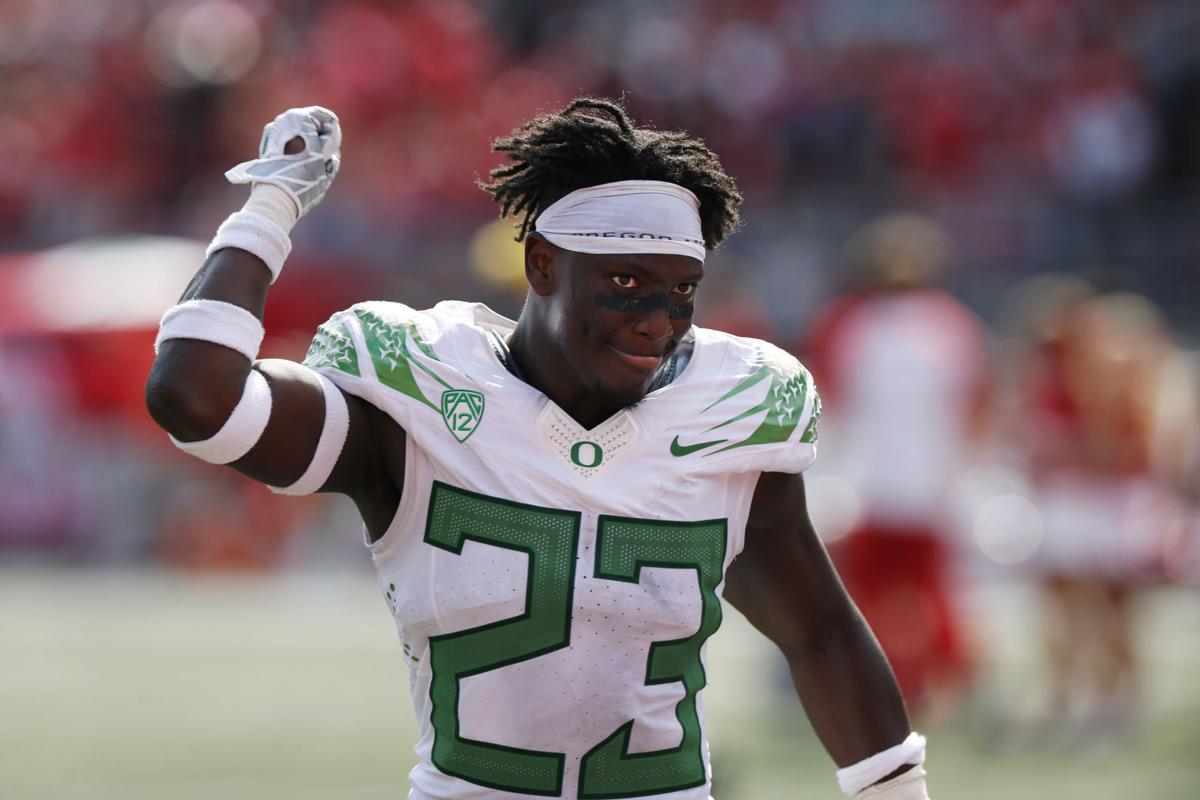 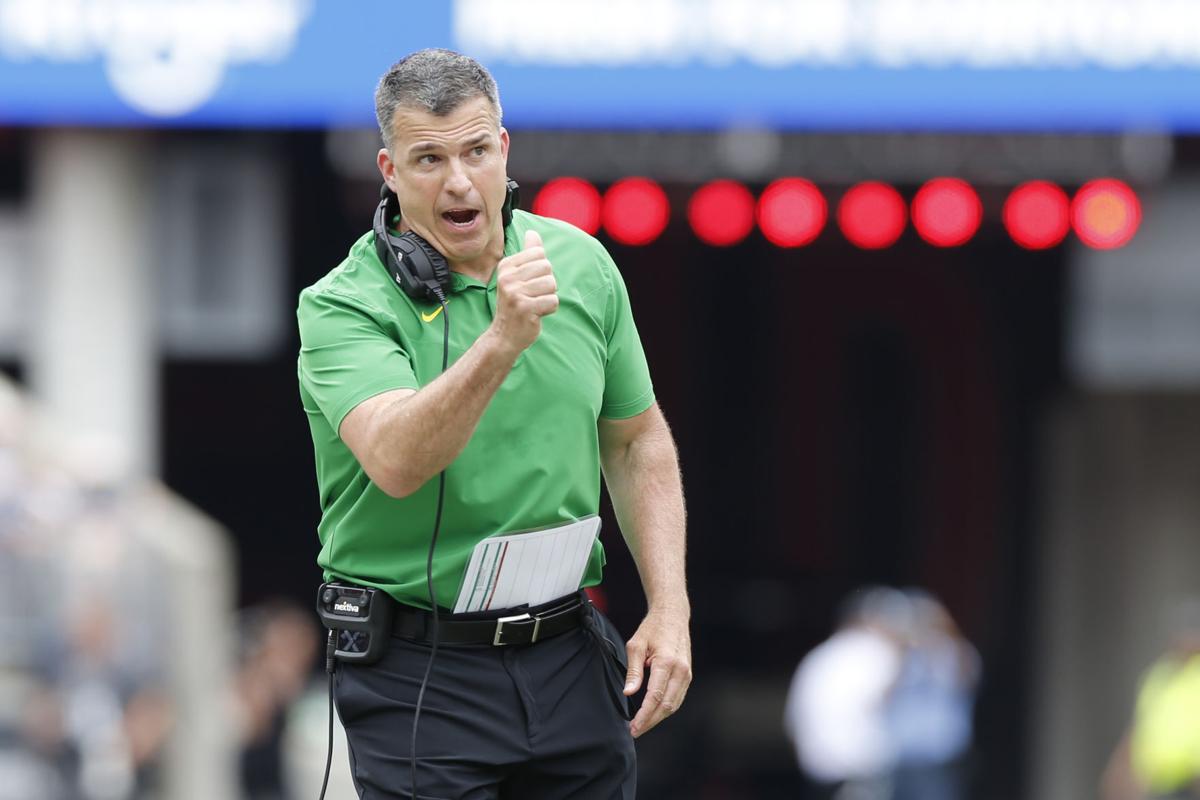 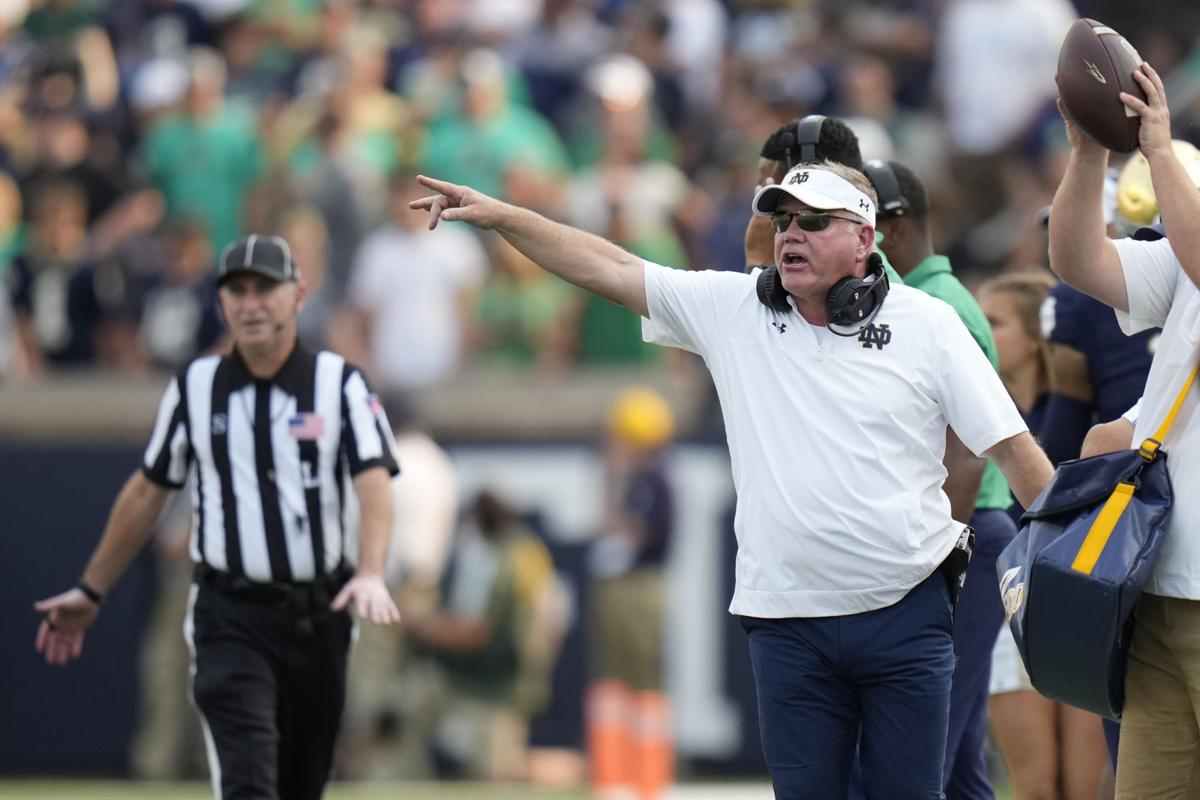 No. 12 Oregon rolled into No. 3 Ohio State without its best player available and walked out with a victory that has the potential to define a season for both the Ducks and the Pac-12.

Make no mistake, this was much bigger than that.

Since 2015, the Pac-12 has made the College Football Playoff just once and far too often has come out on the short end of these types of marquee games. It has turned the conference into a punching bag for the rest of major college football.

The last two weeks, UCLA pushed around LSU and then Oregon beat the big, bad Buckeyes in the Horseshoe, while pass-rushing demon and potential top-five NFL draft pick Kayvon Thibodeaux (foot injury) watched from the sidelines along with star linebacker Justin Flowe.

With new Commissioner George Kliavkoff at Ohio Stadium, hanging around with alliance buddy and Big Ten Commissioner Kevin Warren, the Pac-12 got a chance to puff out its chest.

At least for a few hours.

It was not a banner day across the conference. No. 21 Utah had its nine-game winning streak against BYU snapped. Washington was crushed by Michigan. Cal let one get away at TCU. No. 14 USC looked awful in its conference opener to a Stanford team that nearly was shutout by Kansas State in its opener.

The Ducks' victory more than balanced out the bad news.

It was a masterpiece from Oregon's offense and coordinator Joe Moorhead. The Ducks sliced up the Buckeyes for 269 yards rushing and 7.1 yards per pop.

Ryan Day had not yet lost a regular-season game as Ohio State's coach. He now gets a taste of what that's like in Columbus. Talk radio will not be kind to Buckeyes defensive coordinator Kerry Coombs.

Day will probably take same heat for abandoning the running game and maybe for some of his fourth down decisions and play-calling. The Buckeyes put the game on first-year starting quarterback C.J. Stroud and he delivered 484 yards passing, second-best mark in school history, and three touchdowns. He was also sailed one high late in the fourth quarter that was picked off, essentially sealing a uniquely important victory for Oregon, Cristobal and the conference.

“Hard to express in words the magnitude of coming out here down a couple of guys due to injury and just playing gritty, gutsy football, executing at a high level,” Cristobal said. “A tremendous job of preparation and turning that into game reality by our players, by our coaching staff."

The Ducks have won two conference title and a Rose Bowl in six seasons under Cristobal, but as super teams such as Ohio State, Alabama, Clemson and Oklahoma have dominated their conferences the Pac-12 has had a lot more parity.

That is not the way to make the playoff. Cristobal, a former Alabama assistant and Miami football player, is trying to build a super team in the Northwest.

Week 2 is a long way from selection Sunday, but the Ducks fired a shot that could echo throughout this season.

The most notable thing about No. 8 Notre Dame against Toledo was where the game was available to be watched. Not NBC, like most Notre Dame home games. This one was available only on NBC's Peacock subscription streaming service.

Needless to say a lot of casual college football fans, and probably some Notre Dame fans, too, were comfortable sitting this one out.

The Rockets, however, gave the Irish all they could handle and it felt reminiscent of when Appalachian State upset Michigan on the newly launched Big Ten Network. There had to be more than a few folks wondering if there was a free trial available for Peacock somewhere.

The Rockets ultimately melted down in just about every way possible and Notre Dame survived. for a second straight week

The Fighting Irish defense has problems. The offensive line has been spotty. And who is playing quarterback for this team?

Struggling to beat Toledo wasn't the worst thing that could have happened to the Irish. That would have been actually losing. But it was probably a good thing for Peacock.

AROUND THE COUNTRY: Led by BYU, all the teams the Big 12 invited to the conference on Friday won on Saturday. No. 7 Cincinnati, UCF and Houston all blew out overmatched foes. ... The Cougars seemed to have found another fun quarterback in Jaren Hall to replace Zach Wilson ... For all Matt Campbell's success at Iowa State, and it's remarkable given the history of the program, the Cyclones just can't beat Iowa. Iowa becomes the sixth team since 2000 to open a season by beating two ranked teams, and first since LSU in 2015. ... A week after Florida State was inspiring in a hopeful loss to Notre Dame, the Seminoles found a new bottom. The loss to Jacksonville State on the final play of the game was Florida State's first against an FCS team. ... Welcome to the SEC, Texas. The Longhorns got thumped by former Southwest Conference rival and future Southeastern Conference rival Arkansas. The Razorbacks ran for 333 yards, a dream performance San Pittman, the former offensive line coach who has turned around the Hogs. ... The SEC West could get interesting behind Alabama. No. 5 Texas A&M's offense managed only 10 points in beating Colorado and quarterback Haynes King was injured. LSU has to fix its defense. Ole Miss, Mississippi State, Arkansas and Auburn could all be in the running for the second-best team in the division. ... What is happening at Navy? The Midshipmen are 0-2 after being dominated by Air Force and have been outscored 72-10. ... Miami escaped against Appalachian State, a win that might feel a little like a loss to Hurricanes' fans. Don't take it too hard. App State was the forgotten Sun Belt program last year as Coastal Carolina and Louisiana-Lafayette grabbed attention. The Mountaineers might still be the standard in that conference.

Thoughts on Graham Mertz's performance, an unsung defensive hero, and a possible change being needed along the offensive line.

"It's in the past now and I'm just prepared to move forward and focus on next week," Badgers running back Jalen Berger said about his opening-week absence.

Columnist Jim Polzin asked Badgers fans on Twitter what they thought about No. 18 Wisconsin's 34-7 victory over the Eastern Michigan Eagles on…

Even against the worst opponent on UW's schedule, there were positive signs to take away from its victory on Saturday.

Analysis: How the Badgers' offensive line got the swagger back in rout of Eastern Michigan

The Badgers set out to prove the offensive line could dominate a game. Mission accomplished.

Concerns over COVID-19 are impacting fans at Camp Randall in various ways.

The Badgers beat Eastern Michigan at Camp Randall, but they need to clean up the sloppiness on offense.

Eagles QB Ben Bryant was harassed by the Badgers' defense all night.

Both the 12 ranked teams losing and six ranked teams with a loss after two weeks of the season are more than at the same point in the previous five normal seasons (2015-19).