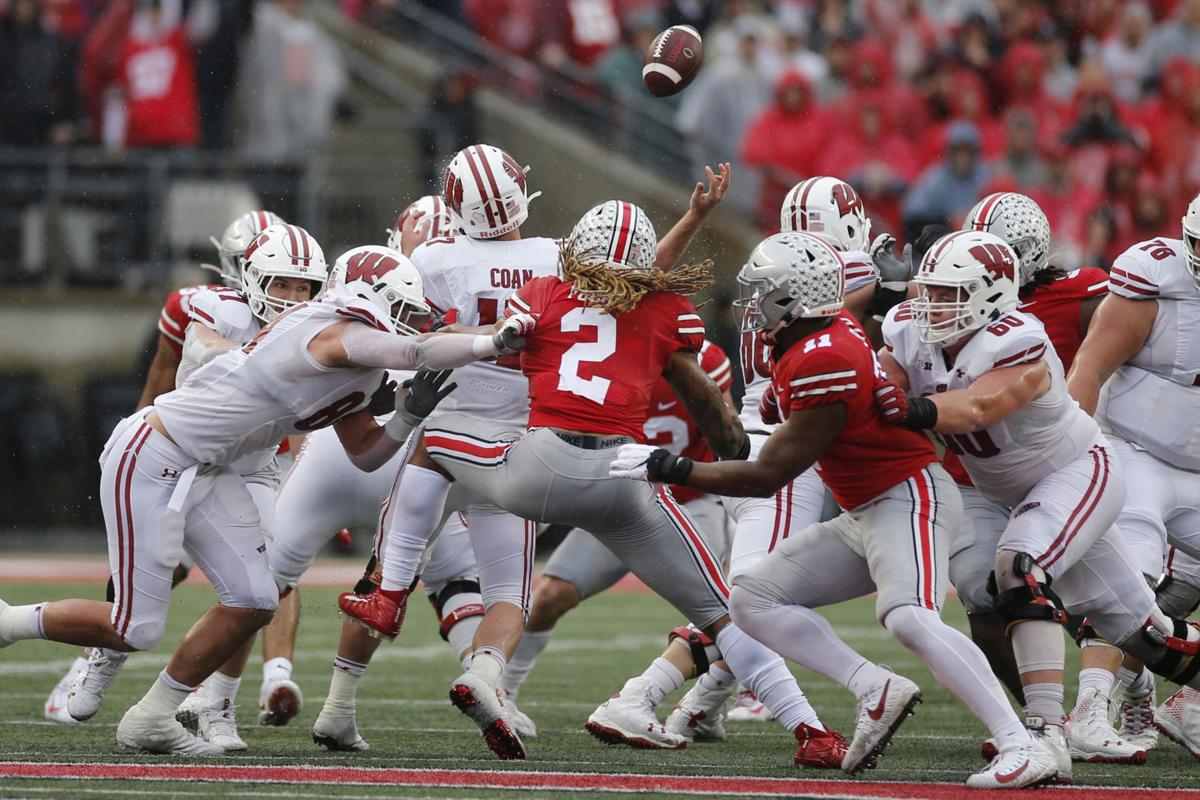 Ohio State defenders Chase Young (2) and Tyreke Smith (11) cause Wisconsin quarterback Jack Coan to fumble the ball on fourth down during the second half of an NCAA college football game Saturday, Oct. 26, 2019, in Columbus, Ohio. Ohio State beat Wisconsin 38-7. 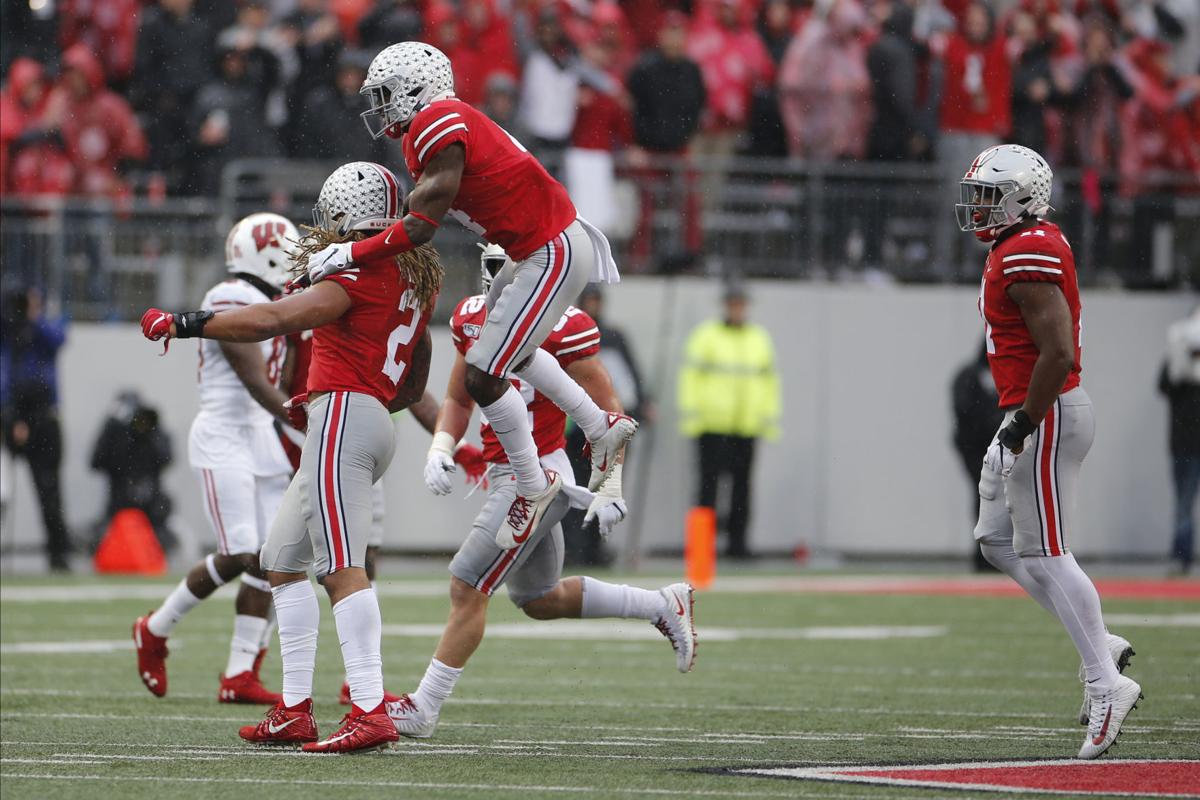 A pure defensive player, a guy who does nothing but play defense, has never won the Heisman Trophy. Charles Woodson was the closest thing in 1997, but he moonlighted as a receiver and was a dynamic kick returner for Michigan.

If it has not happened in 82 years, it probably never will. Especially with college football being more of an offensive game than ever before.

Ohio State defensive end Chase Young is out to change that.

The junior put on a breathtaking performance in the third-ranked Buckeyes' dismantling of No. 13 Wisconsin at the Horseshoe on Saturday. Young had four sacks among his five tackles for loss and caused two fumbles that eliminated all hope of the Badgers hanging with the Buckeyes.

Young has 13½ sacks with four regular-season games remaining. Since sacks became an official NCAA stat in 2000, only Terrell Suggs of Arizona State (24) in 2002 and Elvis Dumervil (20) of Louisville in 2005 have reached 20 sacks.

After last season, it was apparent Young was the next great pass rusher from Ohio State. Most NFL evaluators had already pegged him as a potential top-five pick, following the path blazed by the Bosa brothers. At 6-foot-5, 265 pounds, Young seems to affect every play. Even before Saturday, a case could have been made that Young has been the best player in the country, regardless of position.

Quarterbacks get all the glory, and they have won all but two Heismans since 2000. The other two went to Alabama running backs. The quarterback at Ohio State is really good, too, but Justin Fields is now third in line among Heisman contenders in Columbus, behind Young and running back J.K. Dobbins.

Realistically, Young's chances of winning the award are slim. He could continue to wreck game plans without putting up gaudy stats as offenses scheme to double-team him and call quicker throws.

Since Woodson won the Heisman, four defensive players have been finalists and finished in the top-five of the voting. Notre Dame linebacker Manti Te'o finished a distant second to Johnny Manziel in 2012. Defensive backs Tyrann Mathieu of LSU (2011) and Jabrill Peppers of Michigan (2016) both finished fifth. Both also returned punts. The defensive player who had the best Heisman case was Nebraska defensive tackle Ndamukong Suh, who surged late with a where-were-you-when-type performance in the Big 12 title game against Texas in 2009. Suh finished fourth.

Young is unlikely to make history and win the Heisman, but at this rate a trip to New York as a finalist will be a given.

With a month to go, a Heisman top-five (from a non-voter)

Beware the noon ET kickoff. For the third straight week, an unbeaten team ranked in the top-six was beaten by an unranked team in the first TV window of the day.

No. 5 Oklahoma joined Georgia (against South Carolina) and Wisconsin (at Illinois) among the upset playoff contenders.

The Sooners were knocked off at Kansas State. The Wildcats were a 21½-point underdogs, having scored 49 points in their last three games before dropping 48 on Oklahoma. The Sooners, like the Bulldogs and Badgers the past two weeks, outgained their opponent but made critical mistakes. It was the centerpiece of a wild day in the Big 12, one of three games in which an unranked team beat a ranked team in the conference.

Most alarming for OU was the defense. The Sooners have been much better this season under first-year defensive coordinator Alex Grinch - though to be fair the bar had been set pretty low in recent years. Kansas State had its way with Oklahoma, going for 213 on the ground and 213 in the air. The Wildcats came into the game second-to-last in the Big 12 in total offense and yards per play.

A reminder: One loss doesn't eliminate any team from the College Football Playoff race, but there are plenty of challenges left for the Sooners, including No. 14 and unbeaten Baylor, No. 23 Iowa State and Oklahoma State.

The Sooners have brushed off upsets in the Big 12 before and rolled to a conference title. Pull back the lens back on the Big 12, though, and the potential for some serious cannibalization seems strong. Elsewhere Saturday, Oklahoma State beat No. 23 Iowa State and TCU beat No. 15 Texas.

It was a great day for Baylor, sitting at home and now alone in first place with a healthy lead on third-place and looking good to reach the Big 12 title game.

The biggest beneficiary of Oklahoma's loss could be the Pac-12's top teams. Suddenly, No. 11 Oregon and No. 12 Utah look like better bets to finish as one-loss conference champions than the Sooners.

The first College Football Playoff rankings will be released Nov. 5, but don't get too worked up about them. Most of the top teams (Alabama, LSU, Ohio State, Oklahoma, Penn State) are off next week and Nov. 9 is shaping up to be a doozy, when there will be two games matching four of the nine remaining unbeaten teams in FBS. One is No. 2 LSU at No. 1 Alabama. The other is No. 6 Penn State at No. 17 Minnesota, which improved to 8-0 for the first time since 1941.

AROUND THE COUNTRY: Since falling behind Penn State 21-0 last week, Michigan has gone on a 66-21 run, including a beat down of Notre Dame. Does it count as a big-game win for Jim Harbaugh? ... Memphis needed a missed chipped shot by Tulsa with time expiring to set up a huge game against No. 16 SMU next week that would be a good spot for ESPN's "College GameDay." ...... After beating No. 9 Auburn, LSU has won seven of its last eight against top-10 opponents under coach Ed Orgeron. ... ACC Coastal Division Chaos was in full effect: Miami beat Pitt;North Carolina beat Duke;Louisville beat Virginia. That leaves Virginia and North Carolina at the top of the division, tied at 3-2. Virginia Tech (another team that had a great off week) is in control of the division if it wins out. But, really, what are the chances of that happening? ... Rutgers, UConn and Kansas all won on Saturday. The Jayhawks were the most notable, winning a Big 12 game under Les Miles for the first time with the help of one of the most bizarre mistakes you'll ever see. ... Indiana beat Nebraska for the first time since 1959 (only five games) and became bowl eligible before November for the first time since 1993. Most discouraging for the Cornhuskers, this really wasn't an upset and scrambling to get bowl eligible was not the plan for Nebraska in Year 2 under Scott Frost ... Illinois followed up its upset of Wisconsin by beating Purdue to get to 4-4 with Rutgers and Northwestern still left on the schedule. Illini coach Lovie Smith could go from the hot seat to a contract extension. ... Teams back from the dead: Tennessee (3-5) has won two of three and has a real chance to get bowl eligible after beating South Carolina. Chip Kelly's UCLA (3-5) has won two straight after running out to a huge lead on No. 24 Arizona State, and at 3-2 in the Pac-12 could win the South if it wins out. Really!

5 things we learned about Big Ten football after Week 8: Is J.K. Dobbins better than Jonathan Taylor?

Since the weighting system in the poll changed in 1978 so the difference between a first-place vote and a second-place was only one point instead of two, the margin between 1 and 3 has never been smaller.

Players were in agreement that the 38-7 loss they suffered at Ohio State on Saturday was in the past and they had to turn toward the future.

No. 3 Ohio State announced Friday it will not play star defensive end Chase Young against Maryland this weekend amid concerns he violated NCAA rules by taking a loan last year from someone he describes as a "family friend."

Ohio State defenders Chase Young (2) and Tyreke Smith (11) cause Wisconsin quarterback Jack Coan to fumble the ball on fourth down during the second half of an NCAA college football game Saturday, Oct. 26, 2019, in Columbus, Ohio. Ohio State beat Wisconsin 38-7.