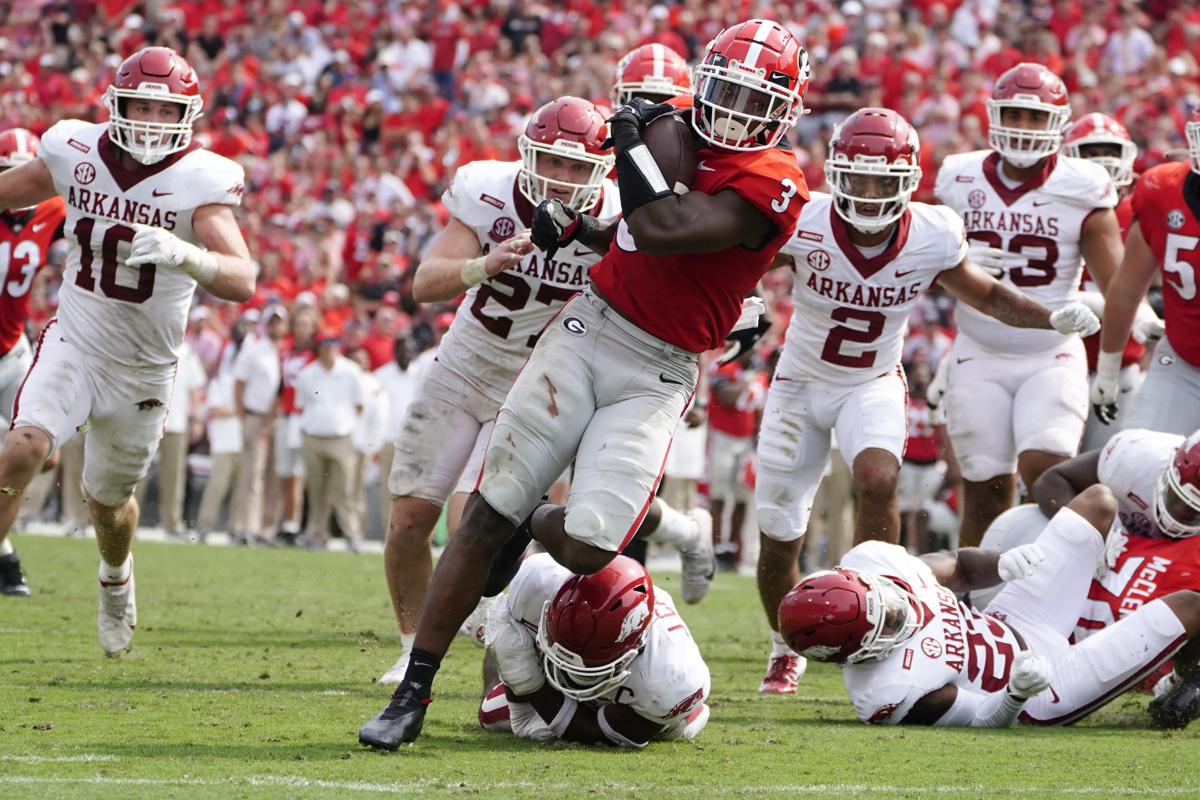 Georgia running back Zamir White (3) breaks through the Arkansas line as he runs for a touchdown during the second half of an NCAA college football game Saturday, Oct. 2, 2021, in Athens, Ga. (AP Photo/John Bazemore) 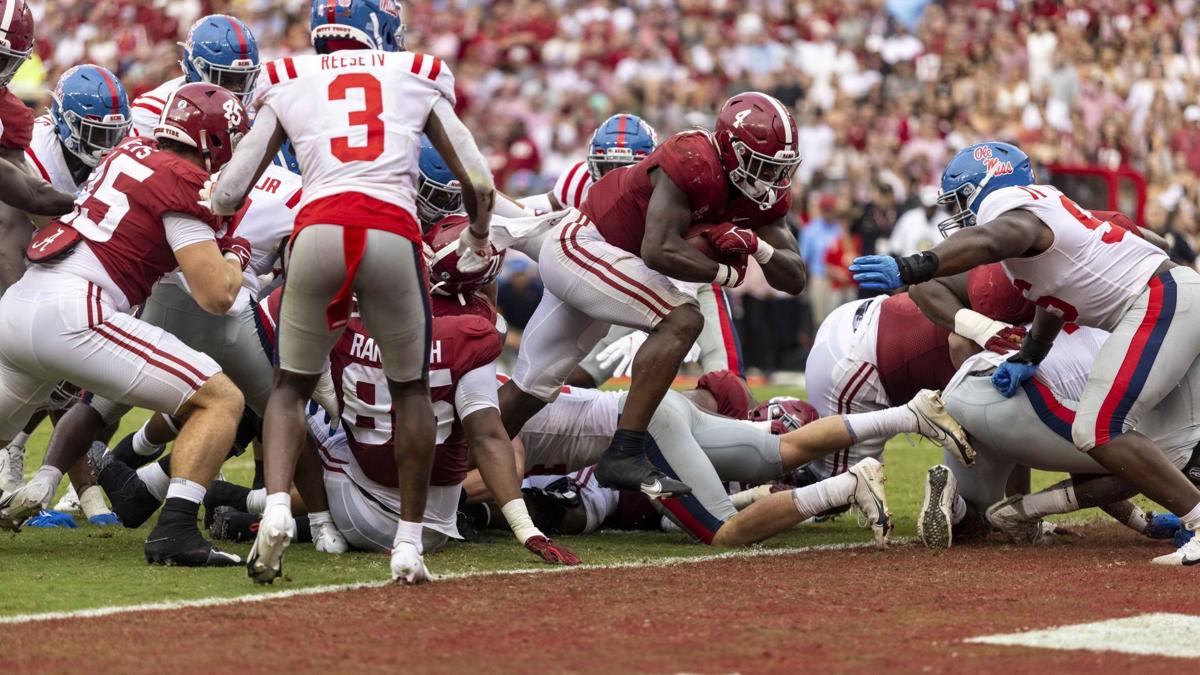 Alabama running back Brian Robinson Jr. (4) runs the ball in for a touchdown against Mississippi during the second half of an NCAA college football game, Saturday, Oct. 2, 2021, in Tuscaloosa, Ala. (AP Photo/Vasha Hunt)

No. 1 Alabama and No. 2 Georgia are not here for the chaos.

On another college football Saturday sprinkled with surprises, including three top-15 teams losing to unranked opponents, the Crimson Tide and Bulldogs left no doubt about who are the two best teams in the country.

The Crimson Tide buried No. 12 Mississippi by halftime and the Bulldogs were up three touchdowns on No. 8 Arkansas before the first quarter was over.

“I don’t want to simplify this, but they just whipped us physically,” Arkansas coach Sam Pittman said.

That has been a theme for Georgia.

The Bulldogs have not been threatened since their opener against Clemson. Arkansas was hoping to make a statement after it bullied both Texas and Texas A&M, but Georgia outclassed the Hogs in just about every way.

And the Bulldogs did it with their back-up quarterback. Stetson Bennett started for JT Daniels, but it hardly mattered.

Bennett threw 11 passes. Georgia hammered away with its running game (273 yards on 56 carries) and let its ridiculous defense do the rest.

Georgia has shut out consecutive Southeastern Conference opponents for the first time since 1980, the last time the Bulldogs won a national championship.

Alabama turned Lane Kiffin's return to Tuscaloosa into a laugher with a similar approach to Georgia. Instead of getting into a race with Matt Corral and Ole Miss' high-scoring offense, the Tide went old school.

“It started to feel like the classic Alabama pound the football,” running back Brian Robinson told reporters.

Robinson carried 36 times for 210 yards and four touchdowns. It was 42-7 Alabama early in the fourth quarter before Ole Miss tacked on a couple of touchdowns.

There were drama filled upsets elsewhere.

Stanford knocked off No. 3 Oregon in overtime. Kentucky beat No. 10 Florida with a late goal-line stand. Mississippi State handed No. 15 Texas A&M its second straight loss, a week before Alabama comes to College Station.

If ever there was a season for a Group of Five team to make a case to be in the College Football Playoff, it might be this year.

And No. 7 Cincinnati might be that team. Desmond Ridder and the Bearcats made themselves right at home at Notre Dame.

Through the first four weeks of the season, 25 ranked teams lost, the most ever in poll history. With games still to be completed Saturday night, seven more had gone down.

There are 128 major college football teams that appear to be ready to provide fans a season of twists and turns and unpredictability.

Not Alabama and Georgia.

They are here to crush everything in their paths on the way to Dec. 4 and the SEC championship game.

No. 14 Michigan had never before won a game in which they were not favored under coach Jim Harbaugh.

The strange streak ended as the Wolverines pulled way from struggling Wisconsin in the second half.

The story here might be more about how the Badgers, one of the most consistent programs in the country in recent years, could be heading for one of their worst seasons in years.

But that's not fair to Michigan and Harbaugh. The Wolverines were embarrassed in their last two trips to Madison, a place they hadn't won since 2001.

Even more than the losses to Ohio State, getting manhandled by Wisconsin appeared to be a turning point in the wrong direction in Harbaugh's seven-year tenure.

"Against a tough, physical team, I thought our team played really physical,” Harbaugh said. “We matched it every bit.”

Harbaugh took a pay cut after last season, helping to put himself firmly on the hot seat coming into 2021.

Michigan still seems limited offensively and somewhat untested on defense. Tougher opponents lie ahead in the Big Ten. Maybe starting next week at Nebraska with the Cornhuskers showing signs of improvement.

Harbaugh has become a coach defined by his failures, despite quite a bit of success. It is unlikely he will deliver on the hype he arrived with in Ann Arbor this season, but Michigan is better and Harbaugh deserves credit for that.

AROUND THE COUNTRY: After losing to Bo Nix and No. 22 Auburn, LSU is 8-7 since winning the 2019 national championship game. The Tigers' remaining SEC schedule includes five teams that were ranked coming into the weekend and unbeaten Kentucky. Things are about to get tense for coach Ed Orgeron. ... All alone in first-place in the Pac-12 North sits Oregon State after a walk-off field goal against Washington. ... Pitt's Kenny Pickett has thrown 14 touchdowns passes over the last three games, including four in a rout of Georgia Tech. That breaks a school record previously held by Dan Marino. The sixth-year senior could emerge as an interesting draft prospect in a season where there are no clear cut high first-round picks. ... No. 25 Clemson scored one touchdown in beating Boston College. Probably time to stop expecting the Tigers' offense to break out. ... No. 6 Oklahoma showed some signs of finding itself offensively against Kansas State ahead of the Red River game against Texas. The Sooners got a few more explosive plays against Kansas State, They'll need them next week against Bijan Robinson and Texas. ... No. 19 Oklahoma State continues to win with defense. ... Top-five matchup in Iowa City is likely next week after No. 5 Iowa and No. 4 Penn State had impressive victories. ... It was great victory for Cincinnati, but the Bearcats' opponents are not doing them any favor. Penn State shut out Indiana, Cincinnati's other Power Five victory. Within the American Athletic Conference, winless Navy upset UCF. The Bearcats are going to need SMU to separate itself from the rest of the American or they will be at risk of not facing another Top 25 team during the regular season.

Columnist Jim Polzin asked Badgers fans on Twitter what they thought of Wisconsin's 38-17 loss to No. 14 Michigan on Saturday at Camp Randall …

University of Wisconsin quarterback Chase Wolf talks to the media after a 38-17 loss to Michigan on Saturday, Oct. 2, 2021.

The University of Wisconsin football team arrives at Camp Randall Stadium for Saturday's game against Michigan.

UW's redshirt sophomore quarterback was taken to a local hospital after a sack in the third quarter.

With five Big Ten teams ranked among the top 11, the Big Ten is set up to be the most interesting conference in the country over the final two months of the season.

Georgia running back Zamir White (3) breaks through the Arkansas line as he runs for a touchdown during the second half of an NCAA college football game Saturday, Oct. 2, 2021, in Athens, Ga. (AP Photo/John Bazemore)

Alabama running back Brian Robinson Jr. (4) runs the ball in for a touchdown against Mississippi during the second half of an NCAA college football game, Saturday, Oct. 2, 2021, in Tuscaloosa, Ala. (AP Photo/Vasha Hunt)