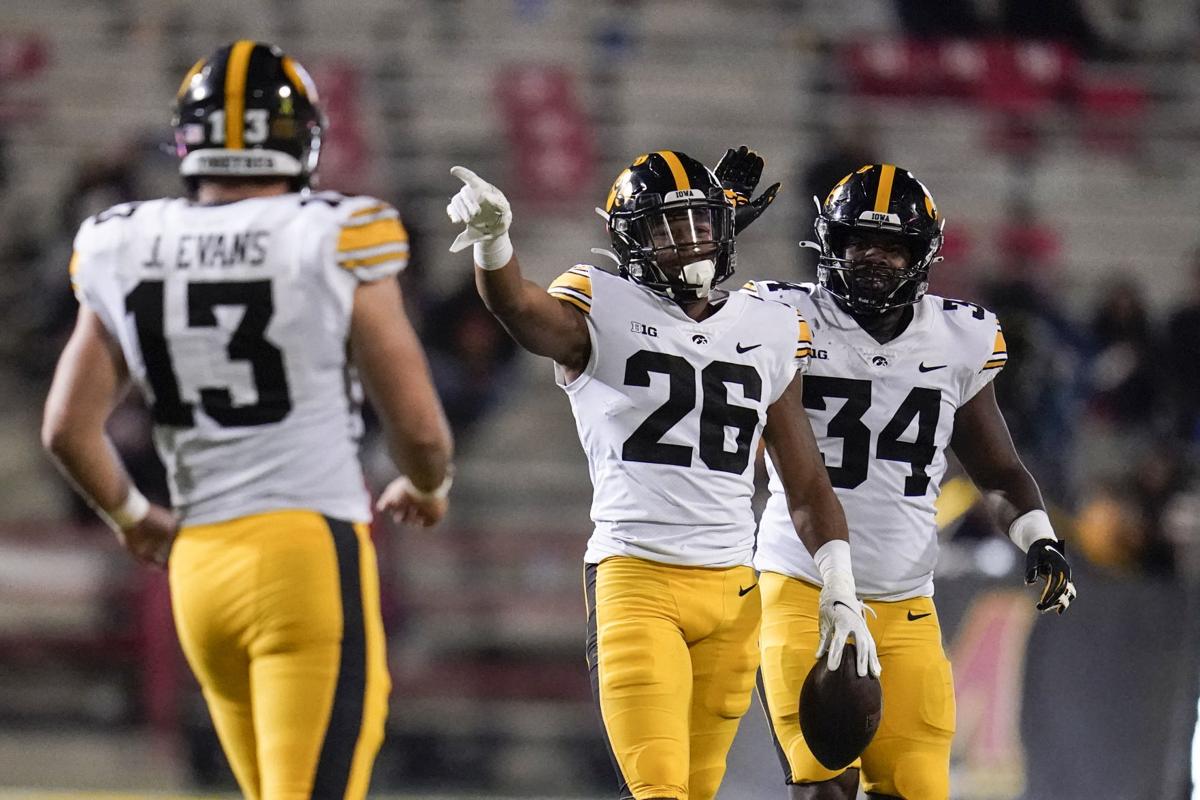 Iowa defensive back Kaevon Merriweather (26) reacts after making an interception on a pass from Maryland quarterback Taulia Tagovailoa, not visible, during the second half of an NCAA college football game, Friday, Oct. 1, 2021, in College Park, Md. Iowa defensive end Joe Evans (13) and linebacker Jay Higgins (34) look on. (AP Photo/Julio Cortez) 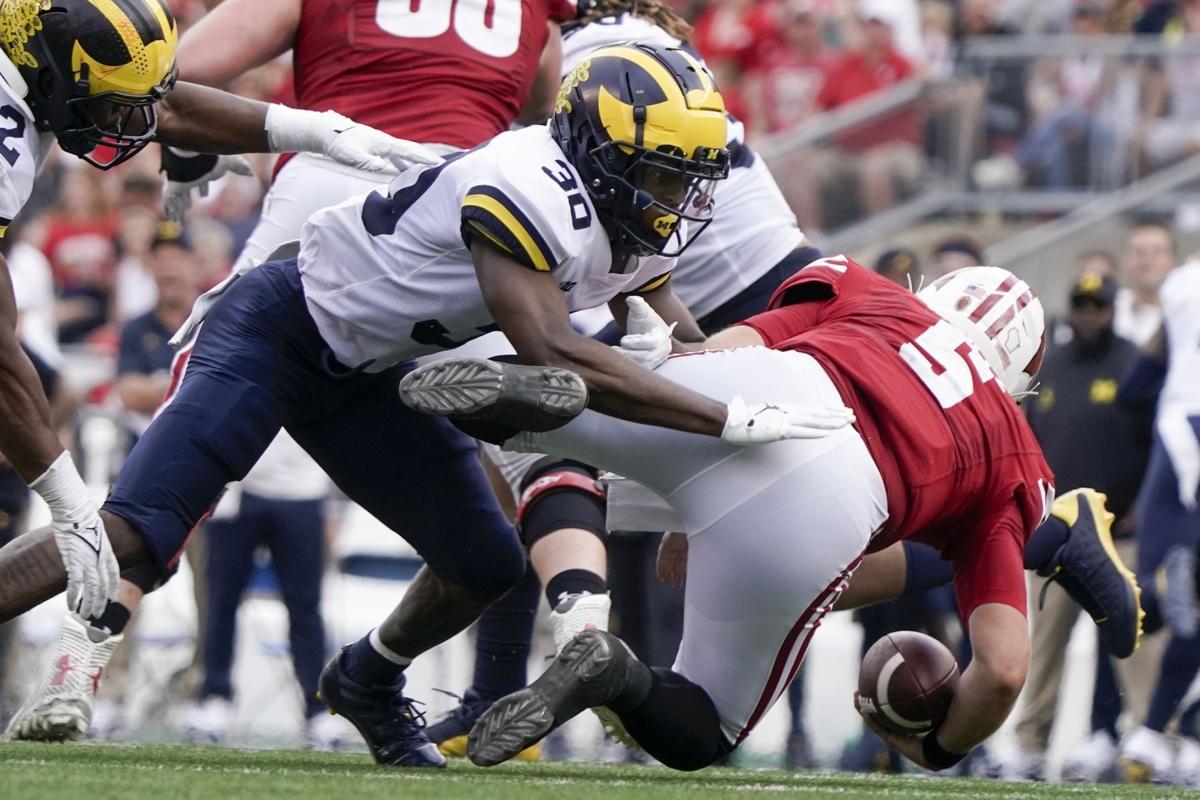 Michigan's Daxton Hill hits Wisconsin's Graham Mertz during the second half of an NCAA college football game Saturday, Oct. 2, 2021, in Madison, Wis. Mertz was hurt on the play and left the game. (AP Photo/Morry Gash) 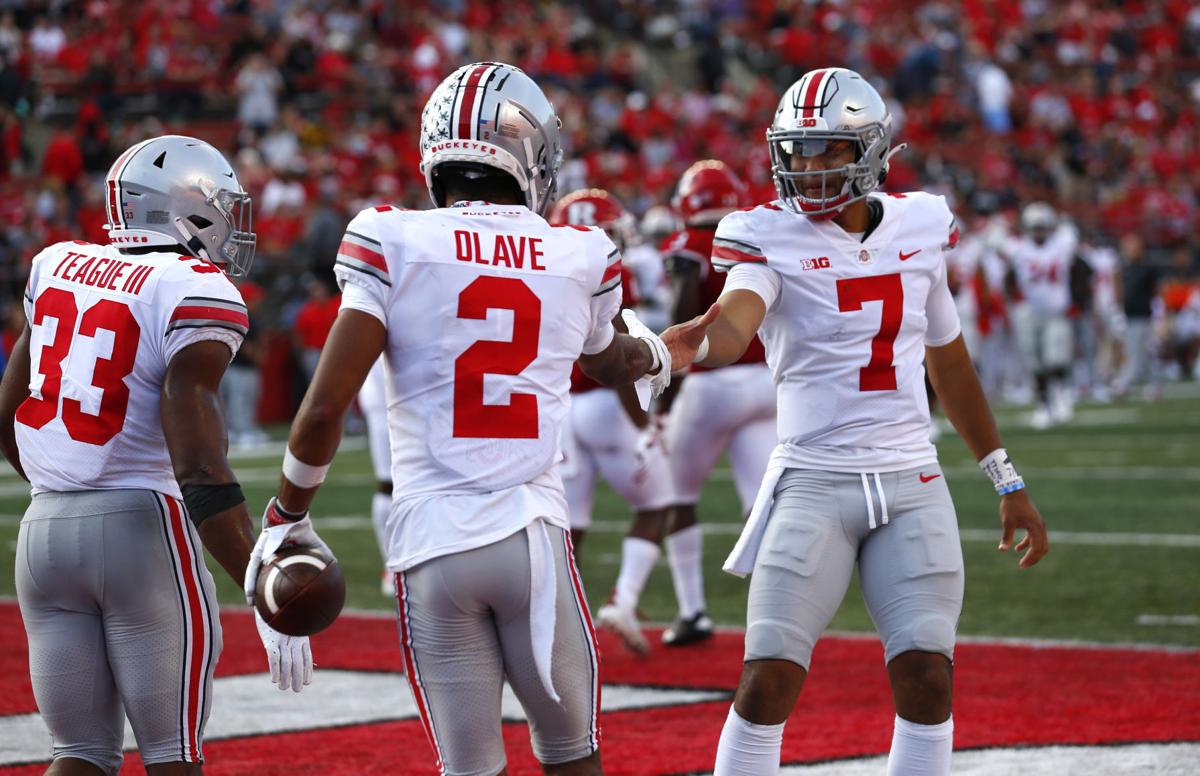 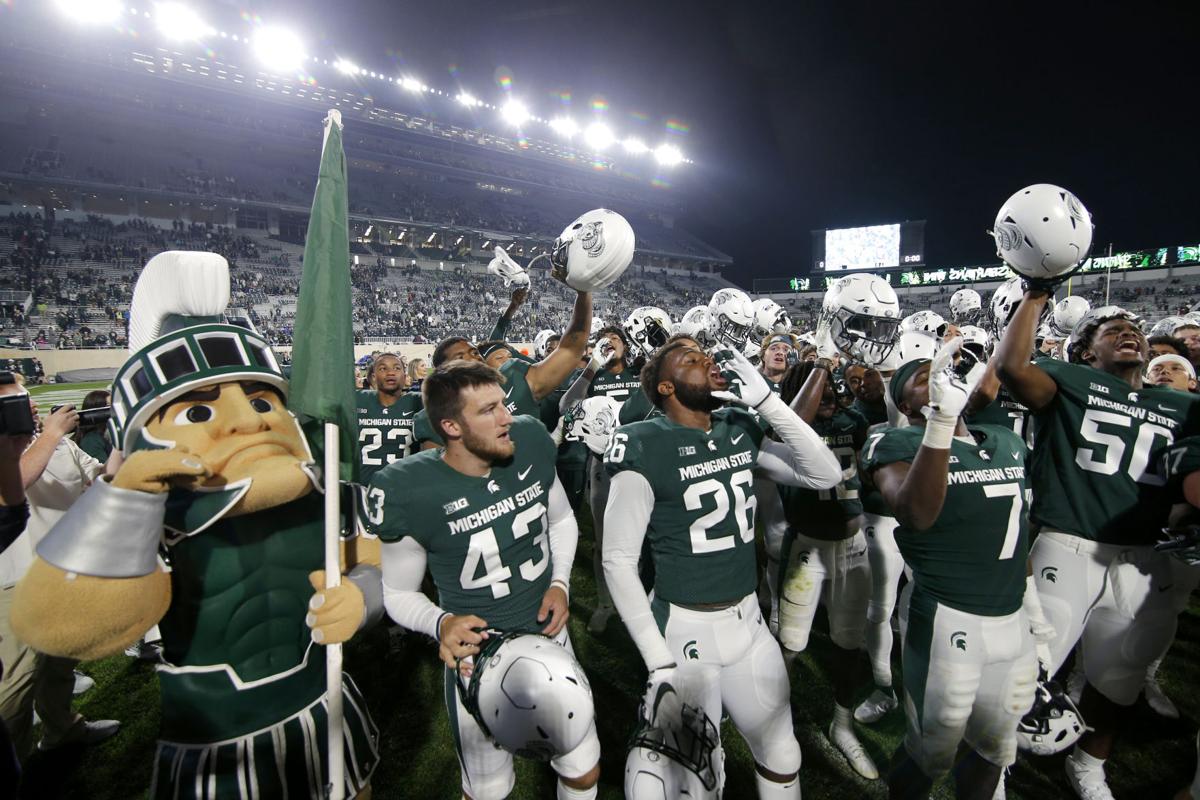 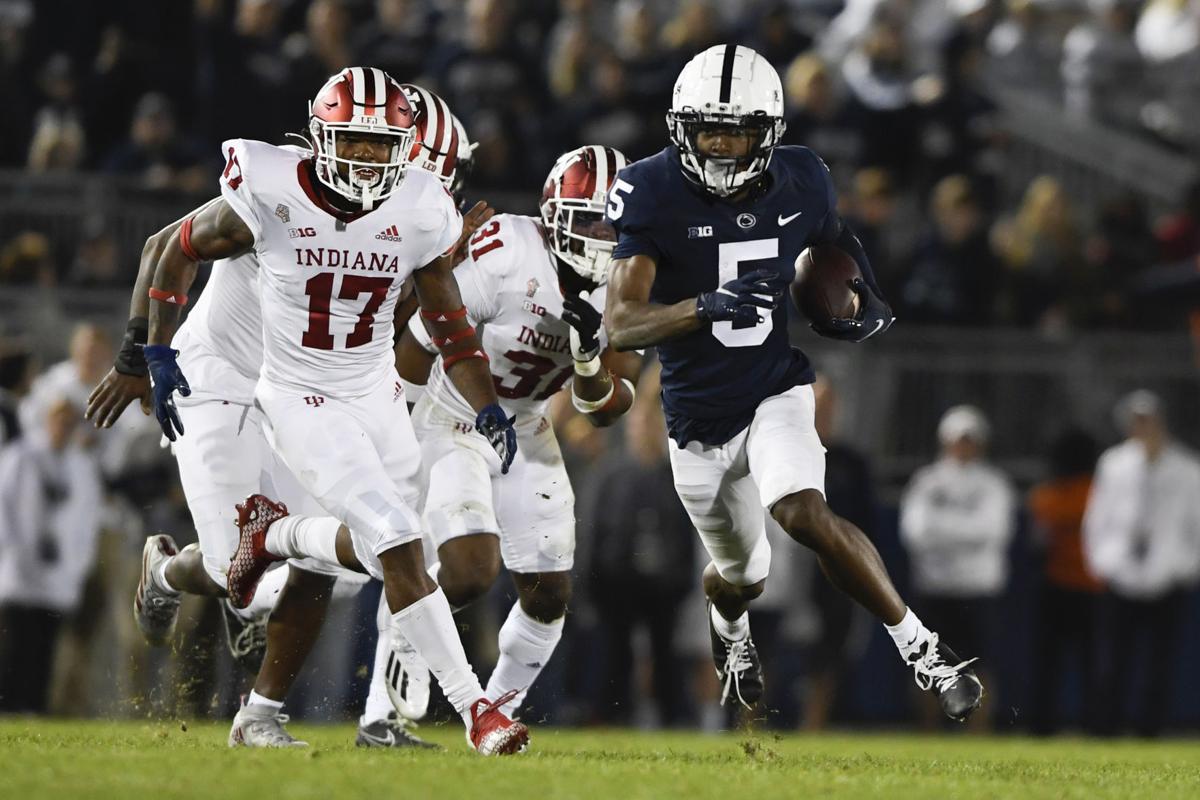 The Big Ten is set up to be the most interesting conference in the country over the final two months of the season.

The latest AP Top 25 presented by Regions Bank has five Big Ten teams ranked among the top 11. The Wisconsin Badgers aren't among the five, as they sit at 1-3 and out of the rankings.

The fun starts next Saturday when No. 4 Penn State visits No. 3 Iowa.

It will be the first top-five game between Big Ten teams not involving Ohio State since No. 4 Michigan beat No. 2 Penn State 34-8 in 1997, and the first involving neither the Buckeyes nor Wolverines since No. 3 Wisconsin beat No. 5 Minnesota 14-0 in 1962.

Next weekend's game is especially important because unbeaten Iowa is the one Big Ten West team among the five powerhouses.

Penn State is the highest ranked among the Beasts of the East, followed by No. 7 Ohio State, creeping back up after that Week 2 loss to Oregon, Michigan at No. 9 and Michigan State at No. 11.

Only the Buckeyes have lost a game out of that bunch.

Iowa's only foray into into the teeth of the Big Ten East is against Penn State, so the Hawkeyes have to be feeling good about their chances of reaching the conference title game out of an otherwise uninspiring division.

The Penn State-Ohio State-Michigan-Michigan State round robin starts the day before Halloween, when the Nittany Lions are at Ohio State and the Wolverines visit the Spartans.

Because of the way the schedule lays out, it's possible all four of those Big Ten East teams could be ranked inside the top 10 heading into Oct. 30.

Reality Check is psyched to see how the Big Ten plays out, but it does have a quibble with where at least one of those top teams is ranked this week.

Next: at Texas A&M, Saturday.

Reality check: While Georgia has the best defense, the Tide might have the best defensive player: OLB Will Anderson Jr. leads the nation in tackles for loss with 11

Ranked: Just right as long as Georgia is 1A.

Reality check: The Bulldogs gave four tailbacks at least 10 carries and none more than 16 against Arkansas. Put another way, Zamir White leads Georgia with 53 carries. Alabama's Brian Robinson had 36 against Ole Miss.

Reality check: The turnover hose keeps flowing into the Hawkeyes' defense. Iowa is up to 16 takeaways and a nation's best 12 interceptions. Reality Check is still skeptical, but why fight it?

Reality check: Nittany Lions have had a tough time getting the running game going, but looked better against Indiana with 209 yards on 42 carries.

Ranked: This is fine.

Next: vs. Temple, Friday.

Reality check: With a former defensive coordinator as a head coach, the Bearcats get pegged as a grind it out offense. Nope: The best part of UC’s offense is Desmond Ridder’s deep shots to big receivers Alec Pierce and Leonard Taylor.

Reality check: Sooners have not yet had a 100-yard rushing day from a running back, but Kennedy Brooks was close against Kansas State with 91.

Next: vs. Maryland, Saturday.

Reality check: Lots of complaints about the defense, but the Buckeyes have the No. 1 offense in the country at 8.57 yards per play.

Ranked: Should be behind Oregon.

Reality check: Everybody has injuries, but it really does seem as if the Ducks have been particularly unlucky. Add RB CJ Verdell (leg) to the list after he was hurt in the loss to Stanford.

Ranked: Should still be ahead of Ohio State.

Next: at Nebraska, Saturday.

Reality check: QB Cade McNamara and the passing game are showing promise and the Wolverines are 5-0 for the first time since 2016.

Ranked: Feels high, but then look at the rest of the options.

Next: vs. Boise State, Saturday.

Reality check: Cougars were on their third quarterback against Utah State and are hoping that Jaren Hall will be back against Boise.

Next: at Rutgers, Saturday.

Reality check: Cowboys looked like a team that was more fortunate than good the first three weeks of the season, but confidence is building and they're playing better in the Big 12.

Next: at No. 17 Mississippi, Saturday.

Reality check: Sure, the Razorbacks were outclassed by Georgia, but who wouldn't be?

Next: at Virginia Tech, Saturday.

Reality check: Drew Pyne might the best option at quarterback for the Irish. Not as good a passer as Jack Coan or runner as Tyler Buchner, but maybe the best combination of both.

Next: at Arkansas State, Thursday.

Reality check: Can a road game on a short week derail the second-highest scoring team in the country?

Next: vs. LSU, Saturday.

Reality check: Wildcats are still offensively challenged, but being the SEC's Big Ten team has been a successful identity under Mark Stoops.

Reality check: Lane Kiffin's fourth-down calls against Alabama all made sense. You can try to win or hope to keep it close. You play to win the game.

Next: at Syracuse, Saturday.

Reality check: Demon Deacons play high-risk, high-reward defense. They are third in the ACC in sacks (17), tied for third in tackles for loss (37), and 11th in yards per play allowed (5.51).

Next: vs. Vanderbilt, Saturday.

Reality check: There is some frustration among Florida fans with coach Dan Mullen after his second loss to Kentucky, but it's hard to take the complaints seriously. How different is this if a Gators defensive back doesn't throw a shoe against LSU last year?

Reality check: RB Bijan Robinson (164 yards from scrimmage per game and nine touchdowns) is here to convince you the Heisman isn't just for quarterbacks.

Next: vs. Stanford, Friday.

Reality check: This is the most talented team in the Pac-12 South, and the Sun Devils are going to be kicking themselves over letting that BYU game get away.

Reality check: There are several quarterbacks putting up gaudy stats in the ACC, but Devin Leary (12 touchdowns pass, two interceptions, completing 67%) has brought much needed stability to a position that has been anything but for the Wolfpack since Ryan Finley in 2018.

Next: at Navy, Saturday.

Reality check: If you're a Big 12 quarterback looking to transfer, SMU is the place to be. Following up the productive career of Texas transfer Shane Buechele, Oklahoma transfer Tanner Mordecai leads the nation in touchdowns passes (24) for the Mustangs.

Next: vs. New Mexico, Saturday.

Reality Check is all about giving some recognition to Group of Five teams, but instead of San Diego State, how about unbeaten UTSA?

"There has to be a lot of reflecting of what do you bring to the table on this team?" senior safety Collin Wilder said after Saturday's blowout loss to Michigan.

On another college football Saturday sprinkled with surprises, including three top-15 teams losing to unranked opponents, the Crimson Tide and Bulldogs left no doubt about who are the two best teams in the country.

UW's redshirt sophomore quarterback was taken to a local hospital after a sack in the third quarter.

Graham Mertz says he's good, but Badgers know they must protect him better

Badgers QB Graham Mertz says he'll do everything he can to play this week after taking a hit to the chest and ribs against Michigan.

Iowa defensive back Kaevon Merriweather (26) reacts after making an interception on a pass from Maryland quarterback Taulia Tagovailoa, not visible, during the second half of an NCAA college football game, Friday, Oct. 1, 2021, in College Park, Md. Iowa defensive end Joe Evans (13) and linebacker Jay Higgins (34) look on. (AP Photo/Julio Cortez)

Michigan's Daxton Hill hits Wisconsin's Graham Mertz during the second half of an NCAA college football game Saturday, Oct. 2, 2021, in Madison, Wis. Mertz was hurt on the play and left the game. (AP Photo/Morry Gash)