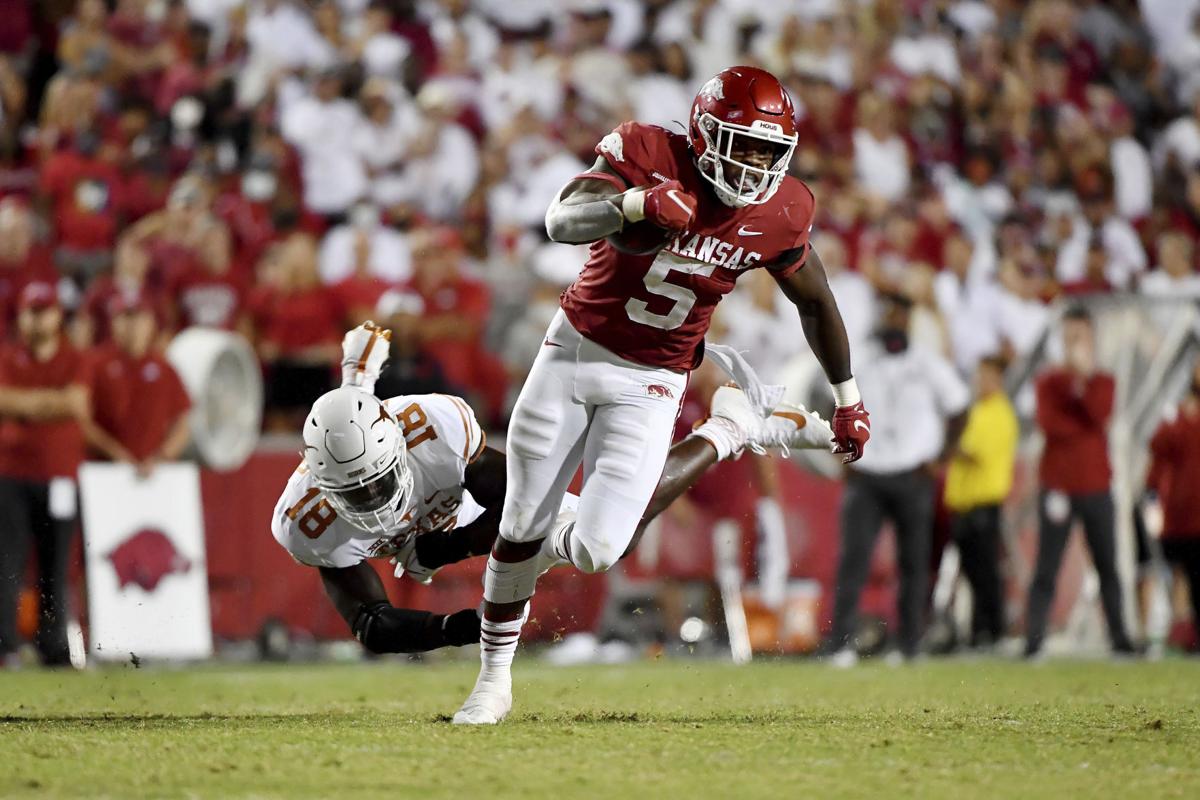 Arkansas running back Raheim Sanders (5) sheds Texas defender Ovie Oghoufo (18) as he runs for a touchdown during the second half of an NCAA college football game Saturday, Sept. 11, 2021, in Fayetteville, Ark. (AP Photo/Michael Woods) 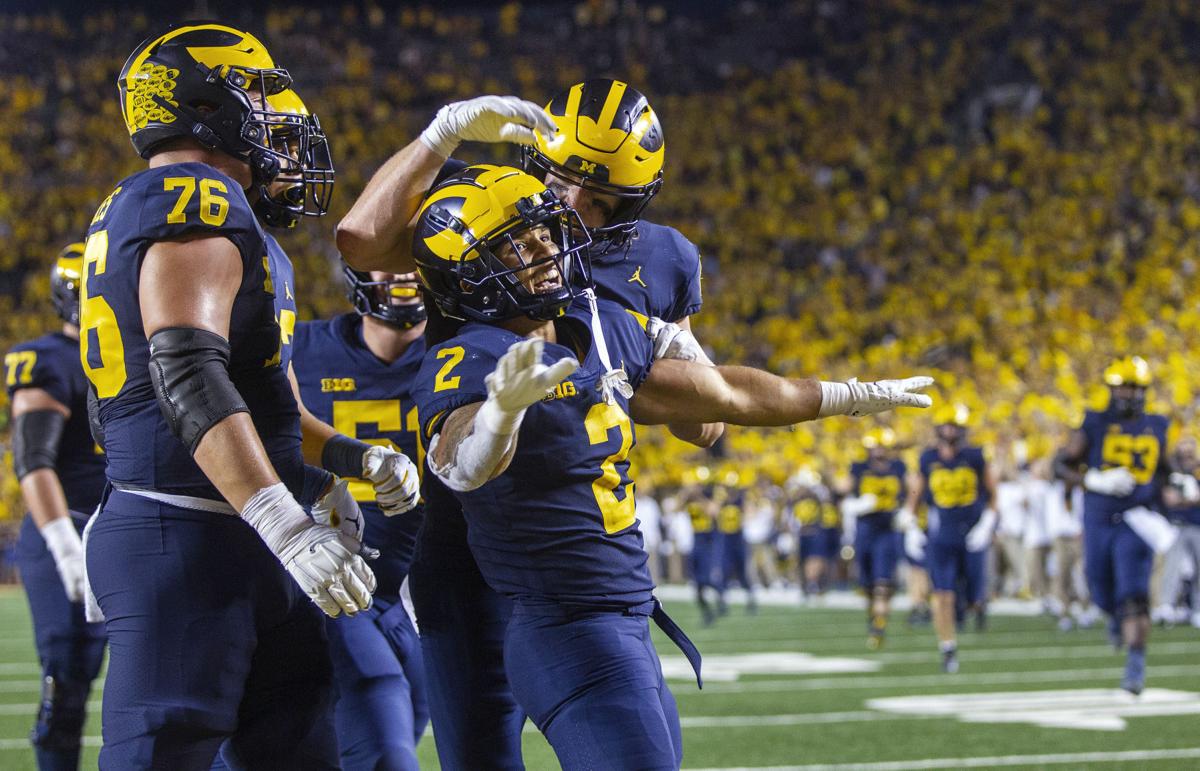 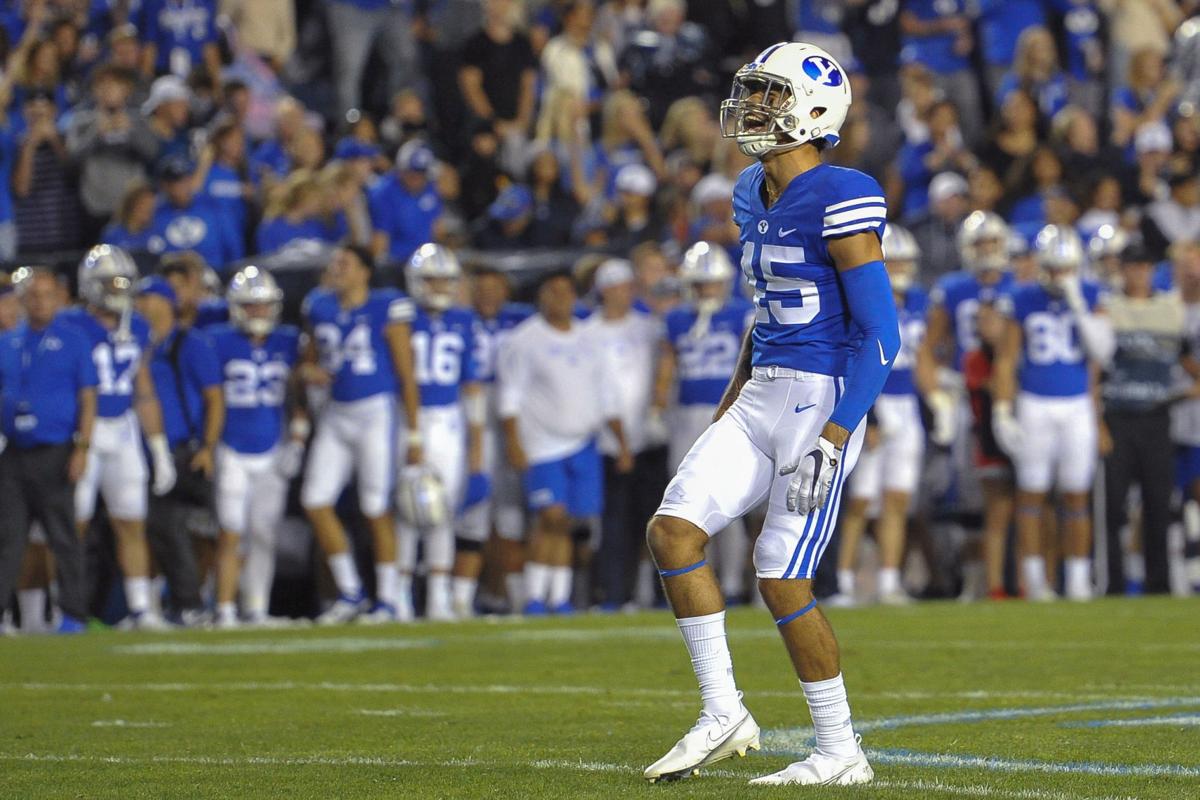 Two weeks into the regular season and already 12 ranked teams have lost, including five to unranked teams.

That's a fair amount of upheaval to the AP Top 25 presented by Regions Bank so early in the season.

Six teams that were ranked in the preseason are currently unranked and another six teams are ranked but with one loss.

Both the 12 ranked teams losing and six ranked teams with a loss after two weeks of the season are more than at the same point in the previous five normal seasons (2015-19). That's not including last year when the pandemic altered schedules, delaying the start of the season for many teams.

This week Alabama was No. 1 again and Georgia was No. 2 for a second straight week. The rest of the rankings got a good shakeup with Oregon up to four and Iowa at five.

It usually takes about half a season for the the Top 25 to stabilize, give or take a week. Reality Check is ready to start assessing how the voters are doing, something that was shelved during the pandemic because — well —- that was kind of a mess.

Reality check: First game in a hostile environment for the Crimson Tide and new starting QB Bryce Young. Will this actually be a test?

Next: vs. South Carolina, Saturday.

Reality check: No need for QB JT Daniels to rush back from a lat injury. Stetson Bennett, who threw for five touchdowns in 12 attempts against UAB, should be able to get the job done this week, too.

Next: vs. Nebraska, Saturday.

Realty check: Sooners probably didn't need a tune-up for the Huskers, but they took one anyway.

Next: vs. Stony Brook, Saturday.

Next: vs. Kent State, Saturday.

Reality check: Hawkeyes have some dudes on defense, and a couple of nice wins to start the season, but an offense (3.84 yards per play) that needs a lot of work.

Next: vs. Georgia Tech, Saturday.

Reality check: Nothing about the first two weeks of Atlantic Coast Conference play suggests the rest of the league will catch up to the Tigers.

Next: vs. New Mexico, Saturday.

Reality check: Still waiting on word about the injury to QB King Haynes, but the Aggies have not shown much reason to believe they have even close to enough on offense to keep pace with Alabama.

Next: at Indiana, Saturday.

Reality check: Future Big 12 member moves into a critical stretch of schedule. Indiana and Notre Dame might not be as good as the preseason rankings suggested. That could be bad news for the Bearcats in a CFP selection process stacked against them.

Next: vs. Tulsa, Saturday.

Reality check: The Buckeyes' defense starts nothing but four- and five-star players. Talent can't be the problem. They either are not being developed or prepared well enough.

Ranked ... even with the issues, probably a little low.

Reality check: The season has started about as well as possible for a team that needed to get its mojo back. Should get a glimpse of the ceiling against Auburn.

Reality check: Ideally, the Gators will identify their best quarterback and go with that guy against the Tide. Because trying to determine who the best QB is while playing Alabama is not a plan for success.

Next: vs. Purdue, Saturday.

Reality check: Jack Coan? Tyler Buchner? Both? Buchner's mobility is a plus with an offensive line that is developing.

Ranked ... this seems too high, but the middle of the rankings have a lot of teams like that.

Next: vs Fresno State, Saturday.

Reality check: During a week off, the Bruins looked a lot like the best team in the Pac-12 South.

Next: at UNLV, Saturday.

Reality check: That preseason top-10 ranking seemed a bit rich, but the Cyclones have established a pattern of surging in October after a sluggish September. They don't call QB Brock Purdy “Brocktober” for nothing.

Next: at West Virginia, Saturday.

Next: at Buffalo, Saturday.

Next: vs. Tulane, Saturday.

Realty check: Green Wave offense should be a good test for what looks like an improved Rebels' defense.

Reality check: The competition hasn't been much, but Jayden Daniel is completing 73.2% of his passes. Good sign.

Next: vs. Georgia Southern, Saturday.

Reality check: S Jalen Catalon and the Razorbacks held Texas to one short-field touchdown over the first three quarters before yielding a couple of TD drives when the game was out of hand in the fourth.

Next: vs. Virginia, Saturday.

Reality check: No Power Five team has had an easier opening two weeks. If nothing else, it should provide a confidence boost under a new coaching staff.

Next: vs. Michigan State, Saturday.

Reality check: Hurricanes need to get their red zone offense fixed. Miami has converted on two trips inside the 20 into touchdowns.

Next: vs. Northern Illinois, Saturday.

Reality check: Wolverines have started the season with back-to-back 300-yard rushing games behind the combination of Blake Corum and Haasan Haskins.

Even against the worst opponent on UW's schedule, there were positive signs to take away from its victory on Saturday.

"It's in the past now and I'm just prepared to move forward and focus on next week," Badgers running back Jalen Berger said about his opening-week absence.

Thoughts on Graham Mertz's performance, an unsung defensive hero, and a possible change being needed along the offensive line.

Columnist Jim Polzin asked Badgers fans on Twitter what they thought about No. 18 Wisconsin's 34-7 victory over the Eastern Michigan Eagles on…

The Badgers beat Eastern Michigan at Camp Randall, but they need to clean up the sloppiness on offense.

Analysis: How the Badgers' offensive line got the swagger back in rout of Eastern Michigan

The Badgers set out to prove the offensive line could dominate a game. Mission accomplished.

Concerns over COVID-19 are impacting fans at Camp Randall in various ways.

Eagles QB Ben Bryant was harassed by the Badgers' defense all night.

Kyren Williams scored two long touchdowns as No. 12 Notre Dame held off Purdue 27-13 on Saturday, a week in advance of the Fighting Irish facing Wisconsin.

AP Top 25 Takeaways: Superpowers looking not so super in 2021

Arkansas running back Raheim Sanders (5) sheds Texas defender Ovie Oghoufo (18) as he runs for a touchdown during the second half of an NCAA college football game Saturday, Sept. 11, 2021, in Fayetteville, Ark. (AP Photo/Michael Woods)