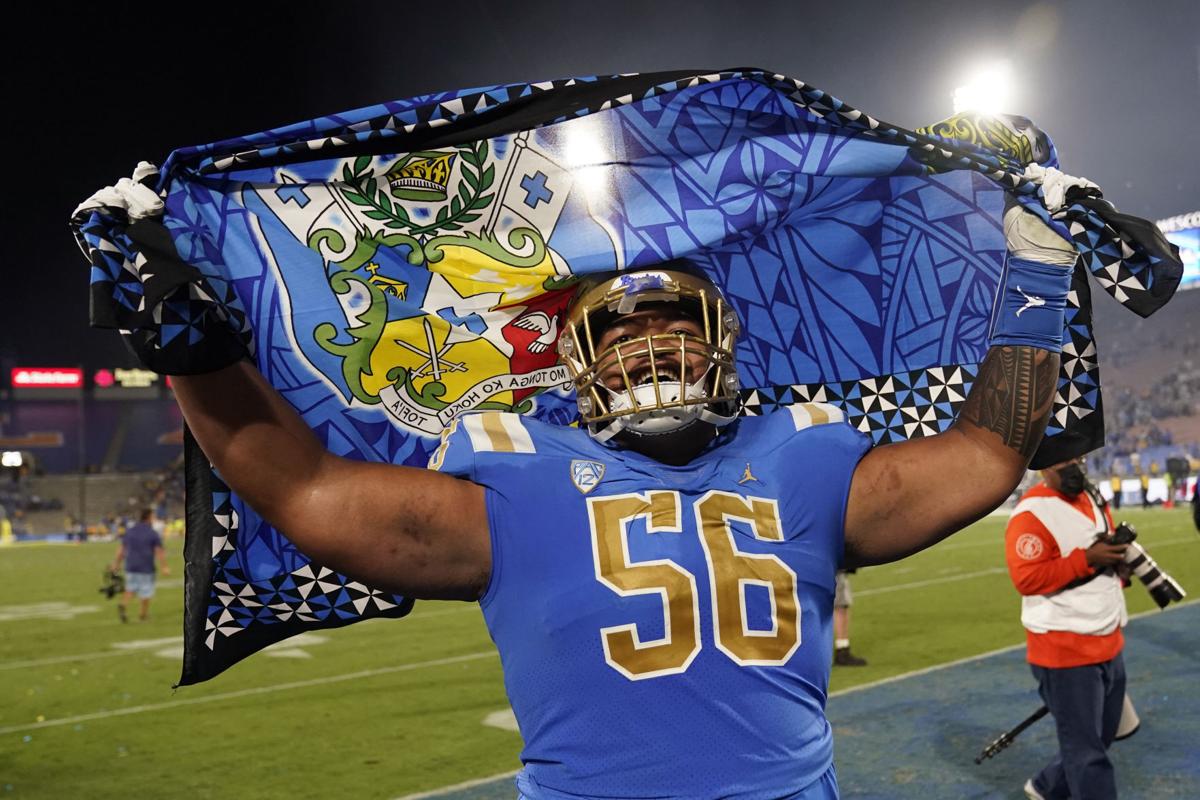 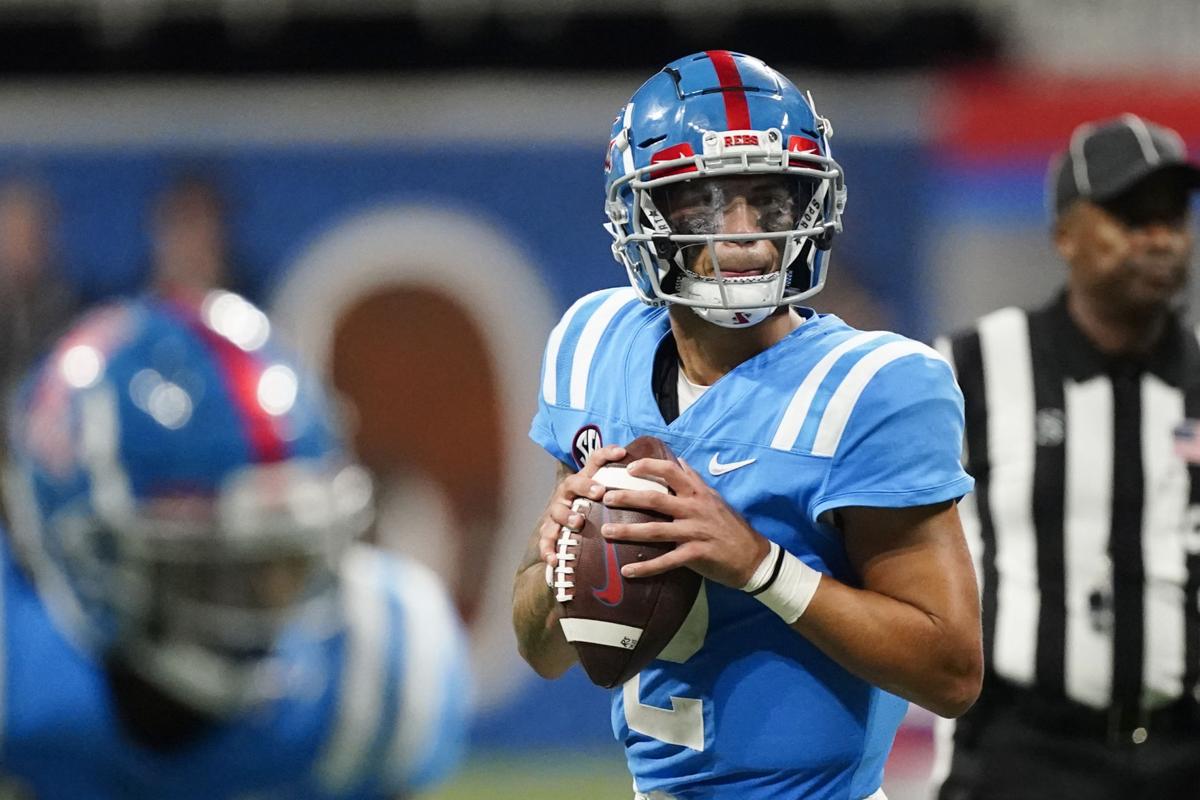 Mississippi quarterback Matt Corral (2) drops back to pass during the first half of an NCAA college football game against Louisville Monday, Sept. 6, 2021, in Atlanta. (AP Photo/John Bazemore)

Week one of the college football season featured eight ranked teams losing. Having five games matching ranked teams will do that.

At the top of the poll presented by Regions Bank, Alabama strengthened its grip on No. 1 and Georgia moved up to No. 2 to give the Southeastern Conference the top two teams in the country for the 30th time.

As for the newcomers, Reality Check is here to remind everyone that history is littered with teams that made brief, early season appearances in the poll only to fade away.

UCLA has played two quality games and gets a week off before playing Fresno State at home ahead of Pac-12 play. The Bruins look as if they are here to stay.

Ole Miss flashed a much-improved defense to go with quarterback Matt Corral's offense in a blowout victory against Louisville. If Coach Lane Kiffin's team can keep playing competent defense, it could be built to last, even against a challenging SEC West schedule.

Auburn was near flawless against Akron in its first game under Bryan Harsin, but we won't know much about the Tigers until Sept. 18, when they play at Penn State.

Then there is Virginia Tech. The Hokies should feel good about beating then-No. 10 North Carolina in their opener, but beware: Virginia Tech averaged a paltry 4.77 yards per play against the Tar Heels.

The Hokies have been ranked in parts of the last three seasons without finishing ranked under coach Justin Fuente. Don't get too comfortable, Hokies.

Next: vs. Mercer, Saturday.

Reality check: Mercer. Miami. Does it even matter? Alabama has been making most of its opponents look like FCS teams, winning 13 of the last 14 games — all against Power Five teams — by double digits.

Next: vs UAB, Saturday.

Reality check: Bulldogs have about a month (UAB, South Carolina, Vanderbilt and Arkansas) to get their receivers healthy and their offense cranked up.

Reality check: Buckeyes have some things to sort out on the second and third levels of their defense. Can the Ducks exploit it? Does it matter with all the weapons Ohio State has at receiver and running back?

Next: vs. Western Carolina, Saturday.

Next: vs. Colorado in Denver, Saturday.

Reality check: New starting QB Haynes King threw three interceptions in his starting debut against Kent State. That’s not going to work in the SEC West, but maybe he was just getting them out of his system.

Next: vs. South Carolina State, Saturday.

Reality check: Tigers are out of the top five for the first time since 2017, a string of 57 straight polls, which was the second-longest in poll history behind Alabama's streak of 68 from 2015-19. No need to panic, Clemson fans. There are no more defenses like Georgia's to face.

Next: vs. Murray State, Saturday.

Reality check: Yes, it was only against a solid MAC team (Miami), but the Bearcats were about as thoroughly dominant as any ranked team not named Alabama to open the season.

Next: vs. Toledo, Saturday.

Reality check: Brian Kelly landing defensive coordinator Marcus Freeman was one of the most celebrated assistant hires of this past offseason. It was not a great debut for Freeman's D, but maybe coaches need a wake-up call sometimes, too.

Reality check: Looking ahead? Holding back on offense ahead of the rivalry game? Playing down to the competition? Maybe a little of each explains the Cyclones' ugly opener.

Reality check: Hawkeyes have won seven straight games by an average of 23 points.

Next: vs. Ball State, Saturday.

Reality check: Often teams look to their quarterback to raise the level of play of the players around him. The Ducks are probably going to need the rest of the offense to lift Anthony Brown's level of play if they're going to win a Pac-12 title.

Next: at South Florida, Saturday.

Reality check: Coach Dan Mullen downplayed any suggestion of a quarterback controversy or competition or whatever you want to call it between Emory Jones and Anthony Richardson. Worth monitoring, though.

Next: vs Stanford, Saturday.

Next: at Arkansas, Saturday.

Reality check: Steve Sarkisian’s plan seems pretty simple: Give the ball to your best players as often possible and in the best possible positions. RB Bijan Robinson had 24 touches, averaged 7.3 yards per touch and scored twice in the opener.

Reality check: Bruins are physical up front on both sides of the ball and look every bit like a legit contender in the Pac-12 South. Welcome back to relevance, Chip Kelly.

Next: vs. Kansas, Friday.

Next: vs Eastern Michigan, Saturday.

Reality check: QB Graham Mertz took a lot of the blame for the Penn State loss. He did not play well. But the Badgers’ tailbacks averaged 4.02 yards per rush and that’s not Wisconsin football.

Next: vs. Middle Tennessee, Saturday.

Reality check: DE Amare Barno was a terror against the Tar Heels with 3.5 tackles for loss, including a sack and half.

Next: vs. Austin Peay, Saturday.

Reality check: Rebels won their opener without a head coach in attendance. Could Kiffin win SEC coach of the year from Boca Raton, Florida, this season?

Next: at BYU, Saturday.

Reality check: Baylor transfer Charlie Brewer had a nice debut for the Utes, completing 70% of his passes at 8.6 yards per attempt against FCS Weber State. Should get a lot tougher this week.

Next: vs. Appalachian State, Saturday.

Reality check: App State might look easy after Alabama, but the 'Canes better not think this will be easy.

Next: vs. UNLV, Saturday,

Next: vs. Georgia State, Saturday.

Reality check: Turns out losing two running backs and two receivers to the NFL draft can be problematic —- especially with an offensive line that wasn't all that great last year.

Next: vs. Alabama State, Saturday.

The UW football team needs Graham Mertz to be better, and in a hurry. “I know I can play a lot better football," the QB said after Saturday's loss. "I know we’re a lot better team than that.”

In the centerpiece game of the opening weekend, No. 5 Georgia put on a relentless, ferocious, smothering display of defense against No 3 Clemson.

Watch now: What Penn State QB Sean Clifford had to say to Wisconsin corner after win

Fans haven’t been allowed inside Camp Randall for a football game since 2019, which meant parents missed their sons' games. Here's how they felt about returning.

The Wisconsin football team found out Friday that Leo Chenal would be out for Saturday’s game, giving Maskalunas only one day to prepare.

Grading the Badgers: Offense, coaching get failing grades in loss to Penn State

This was a winnable game against a ranked team and the Badgers were left beating themselves up afterward because, well, they beat themselves in a lot of ways.

Columnist Jim Polzin offers his initial thoughts on the Wisconsin Badgers' loss to Penn State in their Big Ten opener.

A recap of the top plays, top performers and key takeaways from Wisconsin's 16-10 loss to Penn State.

Riley Moss returned two first-half interceptions for touchdowns and No. 18 Iowa defeated No. 17 Indiana 34-6 on Saturday.

Mississippi quarterback Matt Corral (2) drops back to pass during the first half of an NCAA college football game against Louisville Monday, Sept. 6, 2021, in Atlanta. (AP Photo/John Bazemore)