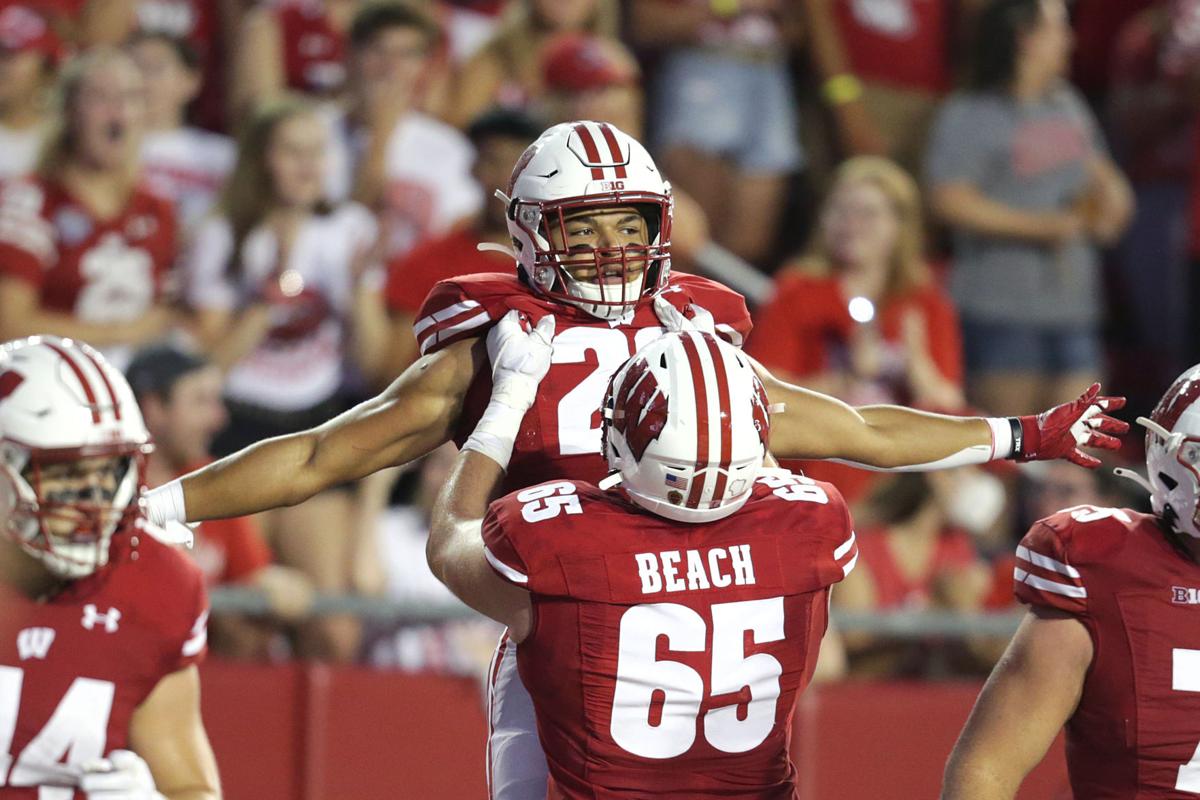 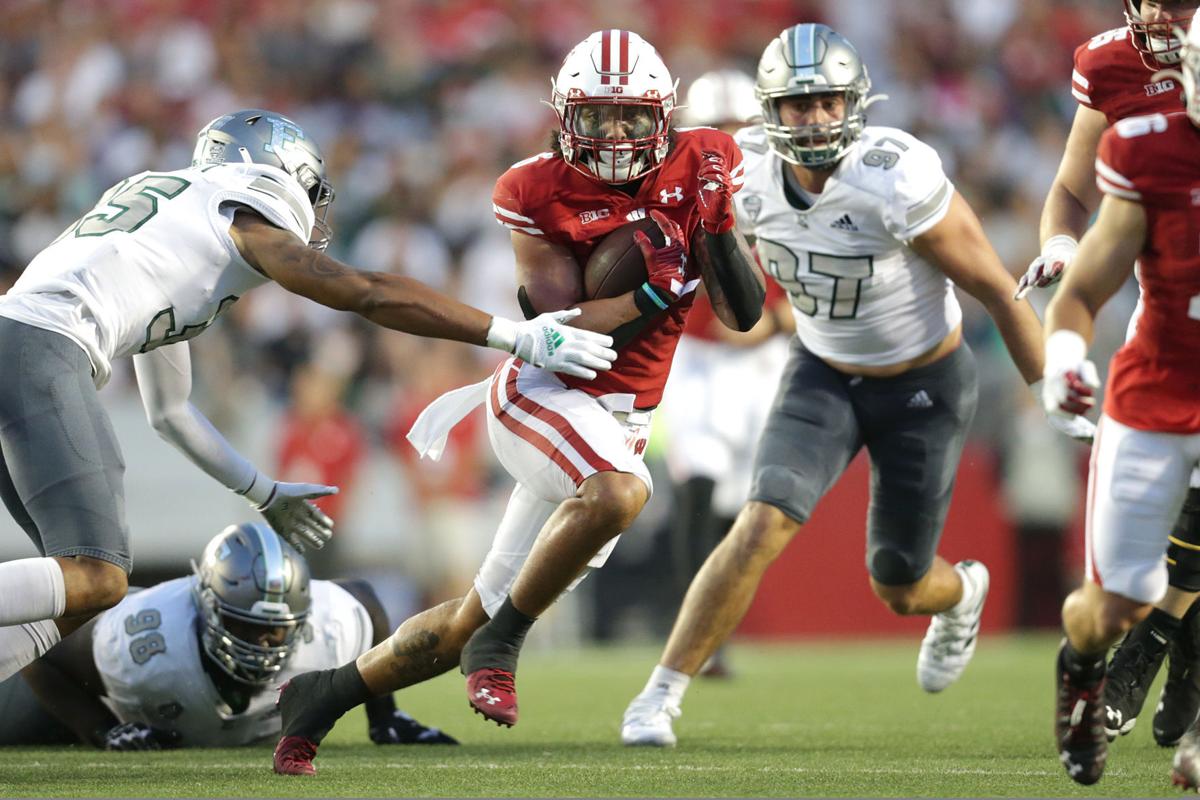 UW running back Chez Mellusi gets past Eastern Michigan defensive back Quentavius Scandrett during the first quarter. Mellusi finished with 144 yards, averaging 7.2 yards per carry. 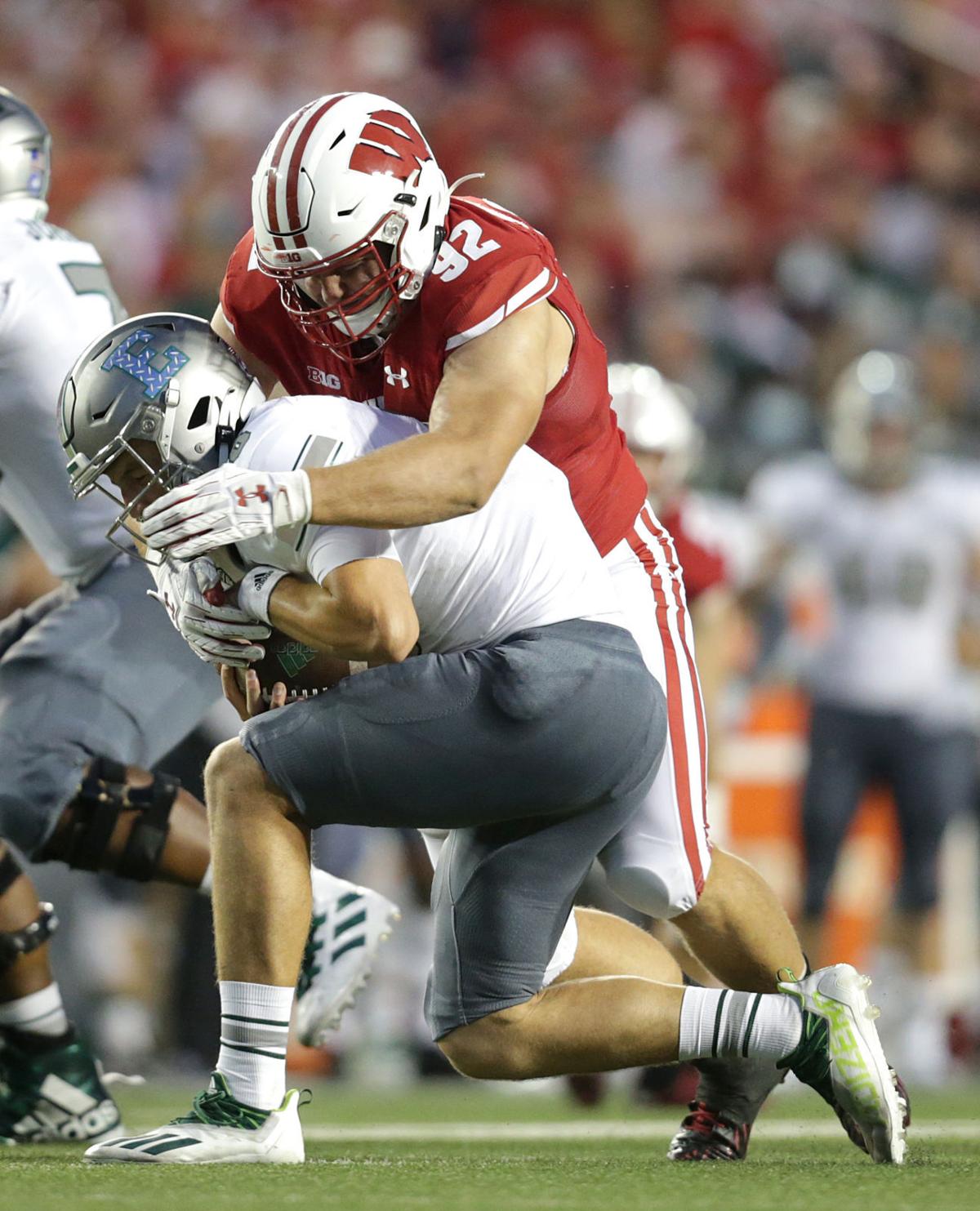 No one on the University of Wisconsin offense was surprised when the No. 18 Badgers opened their game against Eastern Michigan on Saturday with 15 consecutive running plays.

In fact, UW coach Paul Chryst warned his offensive line in advance that it was in for a long, rough night of run blocking against the Eagles.

“Coach Chryst said that we were going to be running a certain play for the first play,” sophomore center Joe Tippmann said. “He said, ‘Hell, we might even run it all the way down the field.’ That’s what we ended up doing.

“It’s a great feeling to have a dominating performance from an offensive line standpoint.”

The Badgers (1-1) bludgeoned EMU’s front for most of a 34-7 win at Camp Randall Stadium, racking up 352 yards rushing on 55 carries. That total included runs of 82 and 60 yards, explosive plays that the offense desperately needs and were set up by solid blocking up front.

The line also kept quarterback Graham Mertz clean, save for one sack that was the result of a cornerback blitz off the left side that wasn’t accounted for after the tight end and running back went out for a pass route.

Multiple players on UW’s offensive line spoke about the team having a condensed game plan compared to what was in place last week against No. 11 Penn State. UW’s coaching staff focused the group on its bread-and-butter concepts — outside zone, double teams getting to the second level and sealing off defenders on the back side to create lanes for a cut back.

Saturday’s matchup became less a chess match and more a question of pride — could the Badgers offensive line do what an opponent knew it wanted to do, what it’s been good at for years and keep a drive going down the field?

That answer for the most part was yes. It was against an overmatched EMU defensive front, and that fact wasn’t lost on UW’s front five, but it was a needed improvement over a game last week where the line’s failure to get the job done, particularly in the red zone, diminished their chance at starting the season with a win.

“Those plays are the plays we work on the most,” senior tackle Logan Bruss said. “It’s always satisfying when you see those plays work, and it’s fun to repeat them, play after play … and just get after it.”

Taking what they did well against the Eagles (1-1) and applying it to tougher opponents — starting in two weeks when UW plays No. 8 Notre Dame at Soldier Field in Chicago — is the next challenge.

“The biggest thing is we’ve got to hold onto those things,” senior tackle Tyler Beach said. “Look at what we did well with it and we’ve got to maintain and keep that, keep that locked away inside of us and make sure we keep that consistency for the next game and be able to add more things onto it.”

The line got to the linebacker level often Saturday. An issue against Penn State was that every run had to be churned out through contact, and running backs rarely got a head of steam going without being near a defender. The Badgers’ offensive line was better fundamentally against Eastern Michigan. The group stayed on double teams until they created vertical push then passed off defenders to create lanes 5 and 6 yards down the field.

Take for instance the two highlight runs of the day — Chez Mellusi’s 60-yard gallop on the game’s second play and Isaac Guerendo’s 82-yard touchdown sprint down EMU’s sideline to effective put away the game in the third quarter. Both plays saw the Badgers run a version of an outside zone — a staple concept in UW’s scheme — and because the UW front was able to get linebackers occupied and give their back a chance to get up to speed without any contact, the backs were able to outrun safeties’ pursuit angles.

On Guerendo’s run, he reached 22.15 mph, per UW’s tracking statistics.

“The coaches have confidence in us that we can maul guys,” Beach said. “When you see a dude bust a big play, you just get a huge smile on your face like, ‘My block did that.’ … You see the back running 30 yards, you’re like (expletive) yeah, we did that.”

“They had a good plan,” Creighton said. “We were really concerned with how good they were at double teams. And they’re really good at it. Just got movement, the line of scrimmage moved, backs ran incredibly hard.”

Having offensive line coach Joe Rudolph focused on the group between drives — drawing up each play on a whiteboard and dissecting them, plus figuring out adjustments in real time — is an advantage the group didn’t have last season when Rudolph was calling the plays.

UW’s line didn’t lose confidence after the loss to Penn State, but the disappointing performance caused it to buckle down on the basics this week. Mertz said he saw an attention to detail from his line this week that he believes will continue throughout the season.

Leading the offense to 6.4 yards per rush and 14 rushing first downs helped get some swagger back in the group.

The Badgers’ front also showed it can be a bit nasty when it needed to be.

Beach directly called out Eagles defensive lineman Turan Rush for spitting on UW players after plays, which caused momentary scuffles at the line of scrimmage. Bruss was flagged for an unsportsmanlike conduct penalty after Rush appeared to step on running back Braelon Allen’s chest after Allen scored a fourth-quarter touchdown.

Bruss wasn’t asked about it after the game, but Beach said it was an example of the line’s mentality regarding its teammates.

“That’s why Bruss got that personal foul,” Beach said, “he’s just trying to protect our guy.”

Watch now: If you could play any other position, what would it be?

Both the 12 ranked teams losing and six ranked teams with a loss after two weeks of the season are more than at the same point in the previous five normal seasons (2015-19).

From missing on third-and-short opportunities and not using pre-snap motion, No. 18 UW's offense has a lot to examine before taking on No. 10 Notre Dame.

UW running back Chez Mellusi gets past Eastern Michigan defensive back Quentavius Scandrett during the first quarter. Mellusi finished with 144 yards, averaging 7.2 yards per carry.