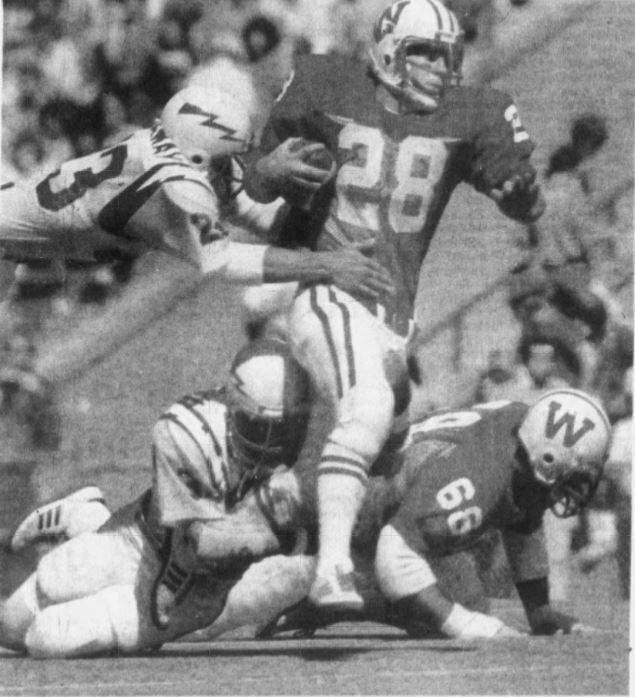 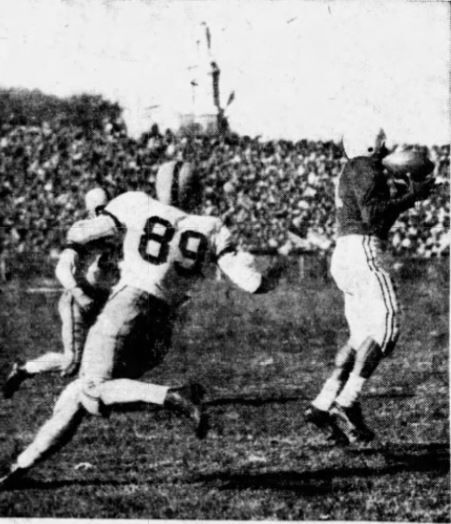 UW's Eddie Withers (11) picks off a pass from No. 18 Navy's Bob Zastrow during the Badgers' 48-13 win over the Midshipmen on Oct. 15, 1949. UW had five interceptions that day, two of which were returned for touchdowns.

It’s difficult for the University of Wisconsin’s football program, which dates to 1889, to do something for the first time.

But the Badgers (2-3) will do so Saturday when they host Army (4-1), whose college football history dates to 1890. The programs have never met on a football field.

School officials said there wasn’t much of a story behind getting the game set up — Army is an independent Football Bowl Subdivision program, so it has 10 games to fill each season to go with set matchups against Air Force and Navy. Jeff Schmidt, UW’s senior associate athletic director for administration and legal affairs, connected with an administrator at Army in 2017 and found a date that worked for both programs. It will be the Black Knights’ first game against a Power Five conference program this season.

The Badgers will celebrate military appreciation day Saturday. Along with offering those in or retired from the armed forces the chance to purchase up to a dozen tickets at a discounted price, there will be a pregame flyover by four UH-60 Black Hawk helicopters conducted by the National Guard’s 1st Battalion, 147th Aviation Regiment, which is stationed in Madison. The West Point Band also will perform at the game, as will a number of high school bands as part of UW’s annual high school band day.

Saturday marks just the fourth meeting between UW and a service academy program and the first since 1979, but all three prior matchups were notable for their own reasons.

UW first played a service academy when it took on No 2. Navy on Nov. 17, 1945, at Municipal Stadium in Baltimore. Navy typically played its home games in Annapolis, but there was enough ticket-buying interest from Badgers fans to move the game to the larger Baltimore site, where Navy would play Army or Notre Dame, according to State Journal reports from the time.

It was the Badgers’ second road game against an opponent ranked in the AP top five that season after they lost 12-0 against Ohio State a month earlier. Navy, which was a premier national program at the time, had a significantly deeper roster than UW and it showed. The Midshipmen led 20-7 late in the third quarter when they stopped a UW drive at the 20-yard line then scored 16 unanswered points to pull away with the 36-7 win. Navy scored the most points of any opponent against the Badgers that season.

UW threw four interceptions and went 1 of 9 passing — or on “forwards” as the box score of the time read. Navy’s Clyde “Smackover” Scott picked off a pass to end a scoring threat in the first half. Halfback Jerry Thompson led UW with 77 yards rushing and threw a 19-yard touchdown pass to George Fuch for the team’s lone score.

Bob Radcliffe’s interception return for a touchdown gave UW an early cushion and set the tone for the day as the Badgers ran away with a 48-13 win. The then-capacity crowd of 45,000 people at Camp Randall saw the most points scored by a Badgers team in 19 years. UW’s defense forced eight turnovers — five interceptions and three fumble recoveries — and five Badgers ball carriers gained more than 20 yards. Radcliffe added a second pick 6 in the fourth quarter, while Bob Teague and Jerry Schaefer had two rushing touchdowns apiece.

“Wisconsin really went to town they sunk the Navy and near took their oars so they couldn’t get back to Annapolis,” State Journal columnist Joseph “Roundy” Coughlin wrote.

Open Jim: Is the check-engine light on for the Badgers football program?

UW’s most recent game against a service academy came in September 1979 when Air Force visited Camp Randall. The freshman-laden Badgers notched the first shutout of Dave McClain’s tenure as coach with a 38-0 win. That day also marked the debut of an electronic message board at Camp Randall Stadium.

Freshman tailback Chucky Davis had touchdowns on UW’s first two drives before severely spraining his ankle in the second quarter. John Williams — a freshman and converted defensive back — tallied a 40-yard touchdown run on his first collegiate rushing attempt. Williams led the Badgers in rushing each of the next two seasons.

How the Badgers will rely on offseason prep, eye discipline and knee braces to slow Army's option

The Badgers recorded three defensive stops inside their 25-yard line, and freshman defensive lineman Tim Krumrie led the charge with 12 tackles. Krumrie — who became a three-time All-Big Ten first-team selection and an All-American as a junior — also recovered a fumble in the first quarter to give the offense a short field, a sign of things to come in his College Football Hall of Fame career.

Krumrie was one of three freshmen to start on defense that day.

Linebacker T.J. Edwards made a special teams play with his team trailing with 4 minutes remaining that swung the game in the Philadelphia Eagles’ favor. Edwards snaked his way through the Panthers’ punt team and blocked a punt and teammate Shaun Bradley recovered it at Carolina’s 27-yard line to set up the winning touchdown drive.

Edwards covered 34.6 yards on the play, according to the NFL's next-gen stats. He also had five tackles on the day, giving him 23 this season.

Former UW wideout Alex Ericson primarily has played on special teams since being elevated to Carolina’s active roster last month, and he had a couple big returns to help the Panthers in their loss against Philadelphia.

His team lost a heartbreaker in overtime, but former UW tailback Jonathan Taylor played a major role in the Indianapolis Colts’ ability to build a lead in regulation.

Andrew Van Ginkel has had somewhat of a slow start to his season, much like the rest of the Miami Dolphins, but he turned in a good showing during the team’s blowout loss to the world-champion Tampa Bay Buccaneers.

Van Ginkel had three tackles, including one for loss, which pushed him to 21 total tackles this season.

J.J. Watt isn’t the most feared player in his team’s front seven for the first time in his career. But the combination of Watt and edge rusher Chandler Jones has paid dividends for the Arizona Cardinals (4-1).

Watt had three tackles, two of which were for loss, a pass defended and recorded three quarterback hits in a defensive struggle against San Francisco. Watt hasn’t yet tallied a sack this season, but he has been active in the opponents’ backfield with four tackles for loss and six QB hits.

Check out all the action from the first Badgers road victory of the season:

Wisconsin coach Paul Chryst did not offer details on Jalen Berger's dismissal, but multiple sources said Berger missed meetings and workouts before being removed from the team.

Jalen Berger, a four-star recruit out of Newark, N.J. who was one of the top recruits in UW's 2020 class, is the third running back to leave the team this season. Here's what we know.

4 observations after rewatching the Badgers' win over Illinois

Assessing quarterback Graham Mertz's play, an unsung hero on defense, and a perplexing strategy from the Illini defense.

Junior tailback Chez Mellusi bet on himself when he decided to transfer from Clemson to Wisconsin, and he's been a needed voice in a diminishing running backs room.

Rapid Replay: Leo Chenal, defense do enough to lead Wisconsin football past Army. Purdue is next

The Badgers climbed back to .500 on the season, but Saturday's win over the Black Knights likely won’t do much for them in terms of perception nationally. Here's why.

Jim Polzin: How a players-only meeting helped members of the Badgers' offense trust each other

Senior left tackle Tyler Beach and his teammates gathered on Oct. 3, the day after a 21-point home loss to Michigan. "You could tell there was a lack of confidence sometimes in the huddle," Beach said. Here's how the meeting changed that.

Whether you are heading down to Camp Randall or watching from the comfort of your couch, the State Journal has Badgers fans covered with a complete breakdown of everything they need to know as Wisconsin takes on Army on Saturday night in Madison.

The UW football team won for the second week in a row as Graham Mertz and the Badgers escaped with a 20-14 victory over the Army Black Knights in a battle under the Camp Randall lights.

Getting a two-score lead before the half was important enough to Wisconsin coach Paul Chryst that he pulled out some new wrinkles on the Badgers’ fourth drive.

The University of Wisconsin football team (3-3) got back to .500 on the season ahead of a key stretch of Big Ten Conference games with a 20-14…

UW's Eddie Withers (11) picks off a pass from No. 18 Navy's Bob Zastrow during the Badgers' 48-13 win over the Midshipmen on Oct. 15, 1949. UW had five interceptions that day, two of which were returned for touchdowns.