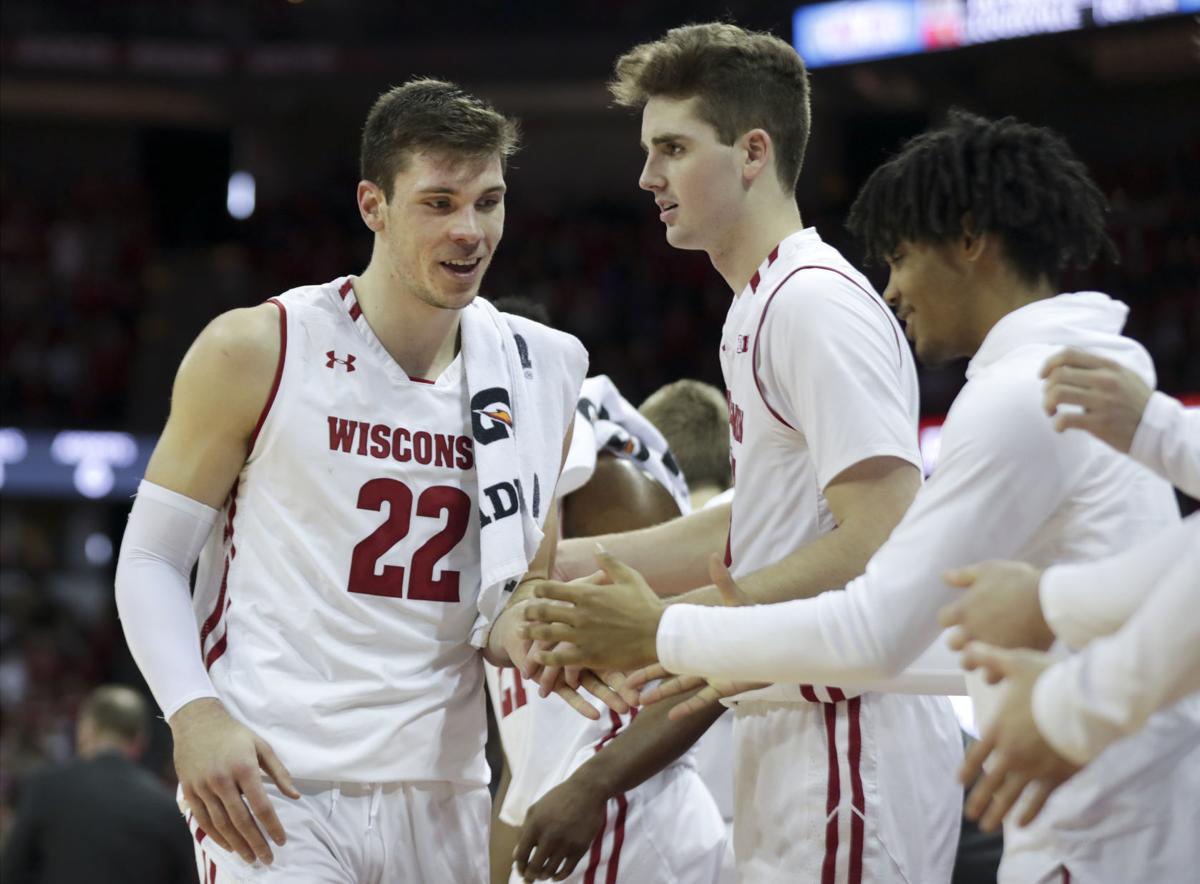 Ethan Happ finished with 13 points, 12 rebounds and 11 assists in the 62-46 win over Northwestern on Saturday at the Kohl Center. It was the senior's second triple-double of the season. 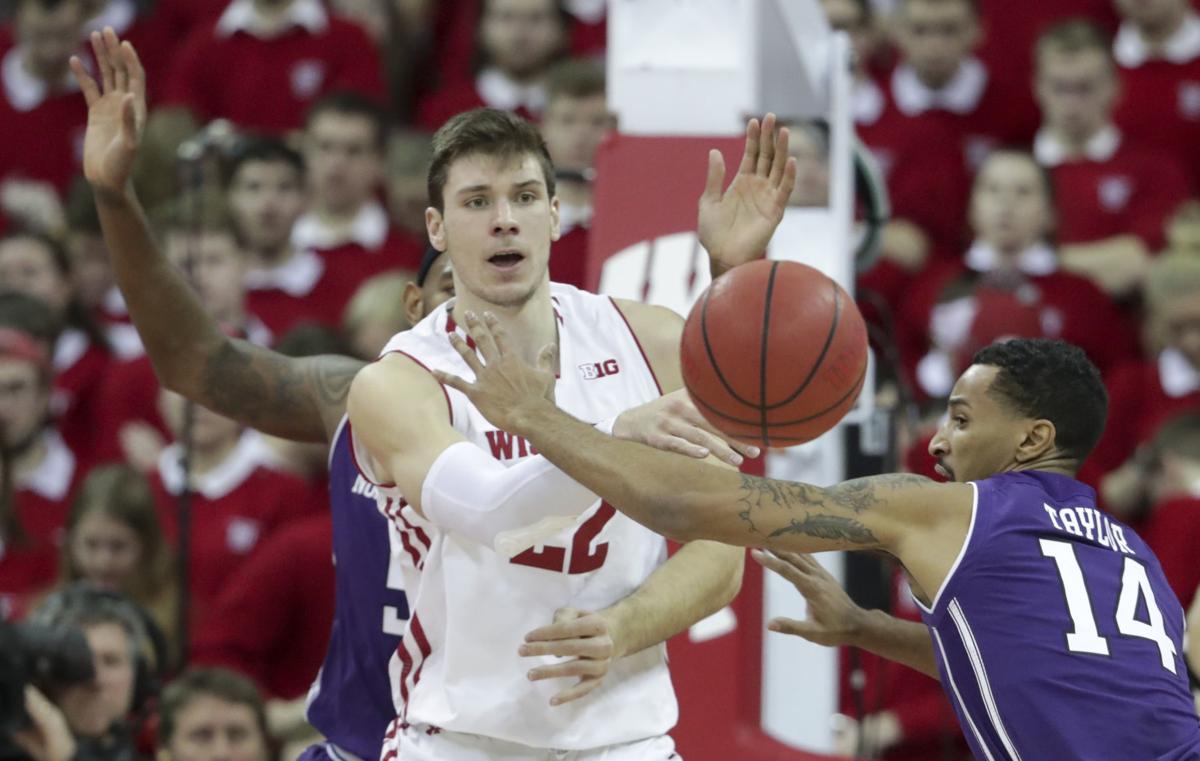 Ethan Happ passes the ball past Northwestern's Ryan Taylor in UW's win over the Wildcats on Saturday at the Kohl Center.

LINCOLN, Neb. — From the start of the question to the end of the answer was just under a minute.

For Ethan Happ, those 52 seconds of the postgame interview session Saturday afternoon at the Kohl Center felt like an eternity.

While Happ was the subject of the question, it wasn’t directed to him. So all the senior center on the University of Wisconsin men’s basketball team could do was sit and listen to a teammate gush about him, understandably uncomfortable the entire time.

“I always think it’s funny when reporters ask a direct question about someone in the room,” Happ said two days later. “I’m just sitting there like, ‘What am I supposed to do here, cover my ears?’ ”

The only other option: blush.

Northwestern coach Chris Collins raved about Happ after the UW star delivered his second triple-double of the season, finishing with 13 points, 12 rebounds and 11 assists in a 62-46 win over the Wildcats. That led to a reporter asking Badgers sophomore guard Brad Davison a short while later if he’s ever taken a moment to reflect on what it’s like to play with Happ.

Davison paused for a moment, then delivered a heartfelt response that began with an acknowledgment that, yes, he’s appreciated the opportunity to be Happ’s teammate. Those 53 games over two seasons have gone by fast, Davison admitted, and he added he’s trying to savor every moment.

It was what Davison said next that provided insight into how UW players feel about the star of the team.

“We want to send him out right,” he said. “We all have the same common goal and those aren’t personal goals, those are team goals. I think that’s what I admire most: He wants to win, and he cares about winning the most. We’re all right behind that. You see all the statistics. He’s going to go down as one of the Big Ten greats, so it’s an honor to play with him.”

Happ is averaging 18.9 points, 10.4 rebounds and 5.2 assists as the 24th-ranked Badgers (14-6, 6-3 Big Ten) get set to play Nebraska (13-7, 3-6) tonight at Pinnacle Bank Arena. He’s rewriting the record books at UW, with a new statistical footnote seemingly added with every game that passes.

During the second half against Northwestern, Happ’s 10th assist of the game moved him past Michael Finley for fourth place on the school’s all-time list in that category. He’s already first in rebounds, second in steals and third in both points and blocked shots at UW.

But Happ’s teammates and coaches don’t view him as a record-chaser. That’s a big reason they’d like to do everything they can to send him out in style.

“You look at Ethan and the legacy he’s left here and the statistics and the career records and all that,” UW junior guard Brevin Pritzl said, “a player like that and a person like that deserves to go out on the right note.”

Based on stats alone, Happ is in the conversation for inclusion on any unofficial Mt. Rushmore of UW basketball. But he understands his legacy will be based on more than individual numbers and accolades.

When Happ decided to return to UW last spring after dipping his toes in the NBA draft waters, his first priority was helping the Badgers return to the NCAA tournament after their run of 19 consecutive appearances ended last season.

The day Happ announced he was coming back — May 30 — he bumped into Davison at the Kohl Center and shared the news. That was the start of a conversation which lasted more than two hours, with a significant chunk of it related to improving team chemistry heading into the 2018-19 season.

Happ was redshirting as a true freshman in 2014-15 when the Badgers swept the Big Ten regular-season and tournament titles and capped a run of back-to-back Final Four appearances with a trip to the title game. That team, led by eventual NBA first-round picks Frank Kaminsky and Sam Dekker, was extremely talented. But it also was a tight-knit group that didn’t let egos get in the way.

“I just kept thinking back to my freshman year, how close that team was and how much they played off each other, everything in the locker room, everything outside the locker room,” Happ said. “I just felt like that’s something we kind of missed from the team last year, so that was something that I wanted to make a concerted effort towards this year, getting closer to everyone else.”

At Davison’s request, Happ got out of his lease and moved into the same apartment building where most of his teammates live. On the court, the Badgers are more connected as a unit than they were a year ago and Happ’s trust in his teammates has grown.

“He cares about winning, almost to a fault where he feels like he has to do too much at times,” UW assistant coach Dean Oliver said. “I think the big difference this year and why he has a couple triple-doubles is he’s realizing he doesn’t have to do it all himself and that he can distribute the ball and make easy plays and let other guys do some things that they’re capable of doing.”

Davison’s flattering commentary in the news conference Saturday wasn’t breaking news to Happ, who’d heard similar sentiments from Davison and others in private. Those moments are equal parts awkward and awesome for Happ, who appreciates that his teammates are happy to be along for the ride.

Wisconsin Badgers return to AP poll at No. 24 amid three-game winning streak

The Badgers, riding a three-game winning streak that included wins over Illinois and Northwestern last week, are at No. 24 in this week’s Associated Press Top 25 poll.

Wisconsin State Journal reporter Jim Polzin asked Badgers fans on Twitter what they thought of No. 24 Wisconsin's 62-51 win over the Nebraska …

Opponents have shot a combined 33.5 percent from the field and averaged 0.83 points per possession during UW's four-game winning streak.

Badgers move up five spots to No. 19 in AP poll

Get ready as No. 19 Wisconsin Badgers prepare to face Nebraska Cornhuskers in Big Ten tournament

Ethan Happ finished with 13 points, 12 rebounds and 11 assists in the 62-46 win over Northwestern on Saturday at the Kohl Center. It was the senior's second triple-double of the season.

Ethan Happ passes the ball past Northwestern's Ryan Taylor in UW's win over the Wildcats on Saturday at the Kohl Center.