The University of Wisconsin men’s basketball team is headed on its first road trip of the season. The Badgers will compete in Las Vegas in the 2021 Maui Invitational beginning Monday.

The Maui Invitational was moved to the mainland due to COVID-19 concerns for the second consecutive year.

The 2021 tournament will be hosted Monday through Wednesday at the Michelob ULTRA Arena at Mandalay Bay Resort and Casino. UW will be joined by Butler, Chaminade, Houston, Notre Dame, Oregon, Saint Mary's and Texas A&M.

Open Jim: Why does the Badgers men's basketball team continually struggle to score?

Player to watch: Davis is set to return after sitting out the Badgers’ loss to Providence on Monday with a lower-body injury. He averaged 15.0 points, 4.0 rebounds and 3.5 assists in the first two games this season. 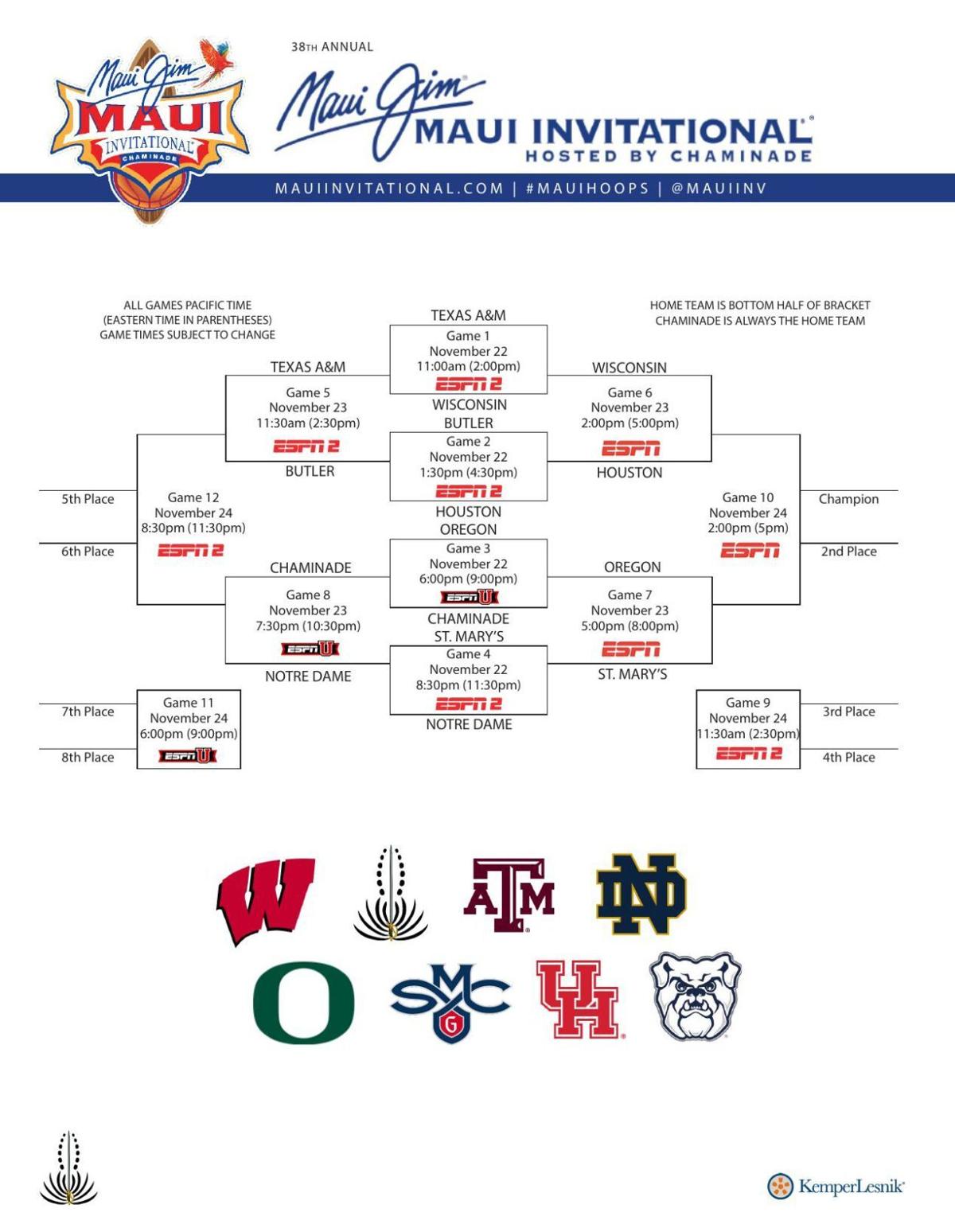 Coach: Buzz Williams, 26-24 in his third season at Texas A&M

Player to watch: Coleman is a sophomore transfer from Duke who is averaging 12.5 points and 5.8 rebounds per game.

A source told the State Journal he bruised his heel during the team’s victory over UW-Green Bay. UW confirmed he had a lower-body injury and was day-to-day.

Davis was a full participant in Thursday’s practice, which was the first time the team practiced after the loss to Providence.

The Badgers scored at least 70 points and held opponents to fewer than 60 points in the two games Davis played. UW also shot better than 35% when Davis played in a game. UW lost to Providence 63-58 and only shot 32.7% — the game Davis missed.

Texas A&M is shooting slightly better than the Badgers at 36.7%, but it only is connecting on 27.7% of its 3-point shots. Coleman and Aaron Cash are the only two Aggies players shooting better than 50%.

All five wins for UW in the Maui Invitational have come when UW out-rebounded its opponents. The Badgers are 2-0 when out-rebounding their opponents while averaging 44.3 rebounds and limiting opponents to 35.3 rebounds per game this season.

UW has 133 rebounds compared to its opponents’ 106 this season. The team is focused on utilizing its centers down low without being sloppy after Crowl and Chris Vogt got into foul trouble early in the first half against Providence.

“I'm new to playing teams like that,” Crowl said. “I’m learning how to be physical to the point where it's not a foul and just trying to find that balance.”

The Aggies have 154 rebounds with an average of 38.5 per game this season. Radford leads the team with 6.8 rebounds per game while the tallest member of the team.

This is the first road trip for 12 of the players on the UW roster. Davison said road trips weren’t the same during the COVID-19 pandemic and it’s the first time many of them have to play multiple games in a row.

UW is guaranteed to play three games and will play them on consecutive days. The Badgers also are playing a high-level team each day. Three of the teams in the field rank higher than the Badgers (46) on KenPom.com — Houston (8), Notre Dame (37) and Oregon (41). Saint Mary’s is right behind the Badgers at 47, while Butler and Texas A&M are ranked 73 and 75, respectively.

Chaminade is not on the KenPom.com rankings because it is a Division II school.

The Badgers only have played one other team in the top 100. Their two wins came against teams ranked in the bottom third.

Davison said the tournament will be a good opportunity to bounce back from a loss and prepare for Big Ten play.

“It's gonna test us,” freshman Lorne Bowman said. “Playing three games in a row is a lot on your bodies. It's really going to take every single last one of us. Coach says it all the time. Our strength is in our numbers, so everybody's got to come ready to play.”

Davis and Davison will be the starting guards for the Badgers because they are the team’s best guards. Both players lean more toward shooting guard but will play the point as well.

The Badgers have true point guards in Hepburn and Bowman, but both are freshmen and need time to grow and adjust to the college game.

Davison will be a key playmaker as the most experienced player on the roster. He returns for a fifth season with the Badgers after averaging 10.0 points, 3.5 rebounds, 2.4 assists and 1.1 steals in 31 starts this past season.

Coach Greg Gard also played Davis, who is more of a shooting guard, at the point in the Red/White Scrimmage, secret scrimmage against Loyola Chicago and exhibition against UW Whitewater.

The Badgers brought in three potential options for the point guard in freshmen Bowman and Hepburn plus transfer junior Neath. Hepburn was expected to start at the point but missed almost two weeks of practice, which hindered his ability to win the starting spot.

Hepburn led the point guards during the Oct. 29 exhibition against UW-Whitewater with 20 minutes and finished with nine points, four rebounds, four assists and three steals. Bowman also missed two weeks of practice with an injury and only played nine minutes in that exhibition. Gard has said in multiple news conferences that Hepburn’s and Bowman’s focus on defense is one of the reasons they’re good point guards.

The last option is Neath. He played point guard throughout high school and during his time at Wake Forest, but Gard has him focusing on playing shooting guard. Neath brings experience to the young team after spending the past two seasons at Wake Forest, where he averaged 4.7 ppg, 2.0 apg, and 1.8 rpg in 50 appearances.

Jonathan Davis is set to take on a bigger role this season. He posted 7.0 points, 4.1 rebounds, 1.1 assists and 1.1 steals per game off the bench while succeeding on 38.9% of his 3-point attempts last season.

He was the only freshman to play in all 31 games during the 2020-21 campaign. He was also a member of the U19 Team USA that won the gold medal at the FIBA World Cup in Latvia this past summer.

Neath is versatile and in practice has shown that he might be the most consistent shooter for the Badgers. He can shoot in the paint and outside the arc. He’s a talented, confident ball controller who can play both guard positions.

Davison, Davis and Neath all can play both guard positions, but Neath is the only one who hasn’t played point for the Badgers in practice or scrimmages. Davis and Davison likely will share the role — both starting — and Neath will provide minutes off the bench.

Wahl is one of only two returning players who started a game last season. He’s the frontrunner to start. The Badgers need him to improve his 3-point shooting after he shot just 27.8% from beyond the arc last season.

Wahl appeared in 31 games and put up 5.2 points, 4.3 rebounds, 1.4 assists and 1.0 steals per game. He typically will play small forward, but he will slide to power forward when coach Greg Gard wants to use a smaller lineup.

Gilmore has become a key bench player during practice and scrimmages this season. He’s likely to be Wahl’s backup because he has a bit more experience than the other potential small forwards. Gilmore only played 17 minutes over nine games last season.

Ilver and Mors both have shown the ability to play small forward, although they typically play the power forward. They’re both versatile, long players who can shoot well. Ilver has been utilized more than Mors in practice and scrimmages.

Carlson was injured for a majority of last season, but he is healthy this season and already has shown improvement in his game. He averaged 2.9 points In the seven games he did play last season. He’s confident in his ball handling and knows how to get to the rim. He can score down low and from beyond the arc.

Members of the UW coaching staff were impressed with Ilver right off the bat and thought he was further along in his game than they originally thought. He was one of three players who was recruited completely virtually. His senior year in high school was cut short, but he knows how to play tough without getting too aggressive. He’s also a versatile shooter.

Crowl has been the standout for the center spot, but he could play power forward depending on matchups.

Crowl played in 12 games last season for a total of 36 minutes and eight points. He jumped into the starting role early in the offseason and has handled it well during the few times he’s played this season.

He was the only player to score in double digits during the Red/White Scrimmage with 13 points. Crowl led both teams during UW’s exhibition against Whitewater with 18 points on 7-for-9 shooting and grabbed six rebounds.

The Badgers also will utilize Vogt here. He’s a transfer from Cincinnati who brings experience guarding Division I opponents. He averaged 5.0 points, 3.5 rebounds and 1.1 blocks for the Bearcats last season.

He gives the Badgers nice size and rim protection. Crowl has said he’s learned a lot from Vogt, and that has helped Crowl become more confident in his game.

Hodges is the other option. He hasn’t played organized basketball since his junior year in high school because he opted out due to the COVID-19 pandemic last season. He put up 15.5 points, 8.0 rebounds, and 2.0 blocks per game as a junior in high school. He has plenty of length, but he needs time to develop and mature.

Point guard is arguably the most important position on the court and two UW freshmen are sharing the duties of the role with some help from more experienced players.

The Badgers overcame a 16-point first-half deficit to storm back for a 69-58 victory over the Aggies in the opening round of the Maui Invitational in Las Vegas.

The Badgers took advantage of a friendly crowd in Las Vegas to overcome a 16-point deficit to down the Aggies 69-58.

3 things that stood out from the Wisconsin men’s basketball team’s win over No. 12 Houston

Johnny Davis turns in a career-best scoring effort for the second straight day as the Badgers upset the Cougars 65-63 to reach the Maui Invitational title game.