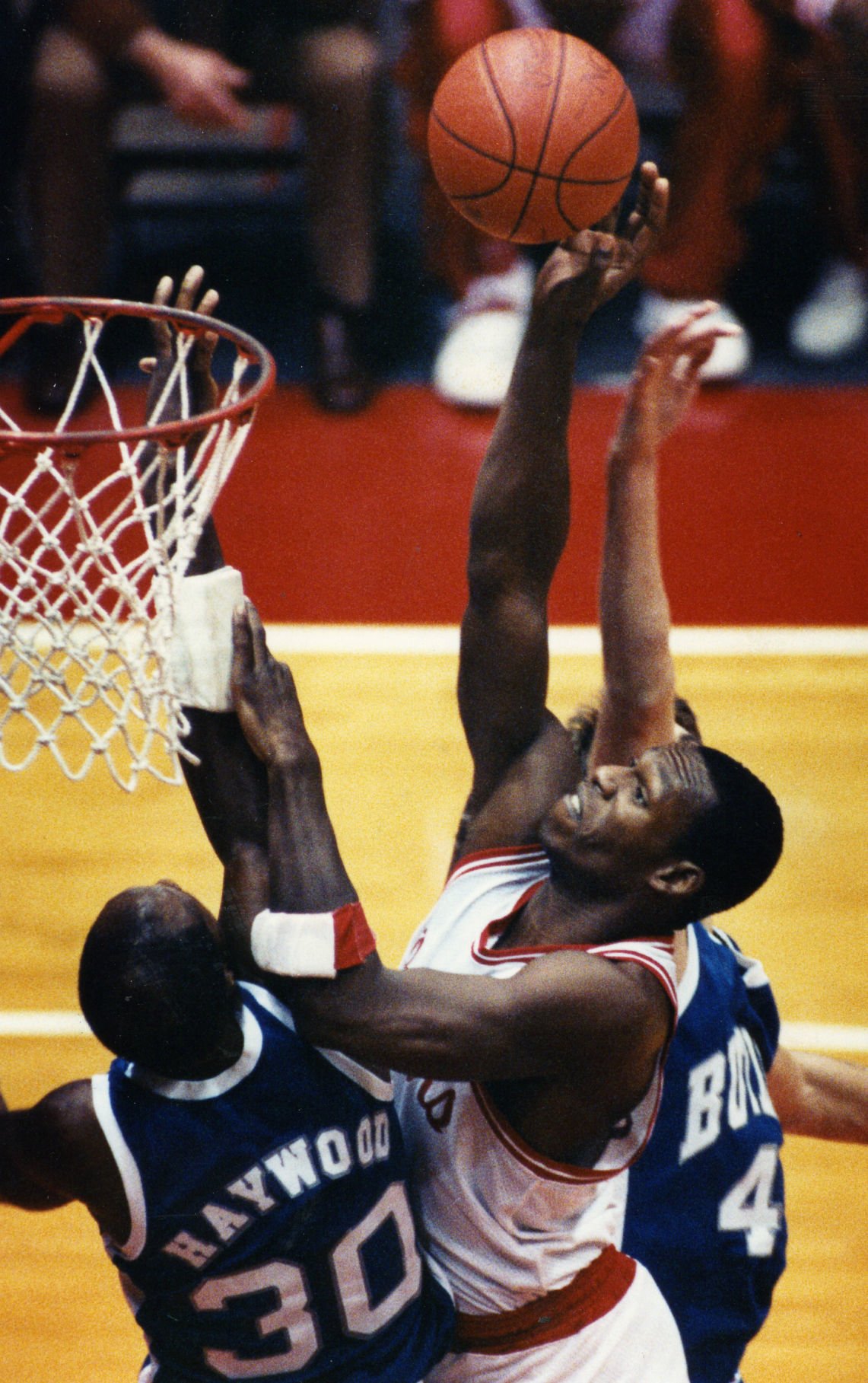 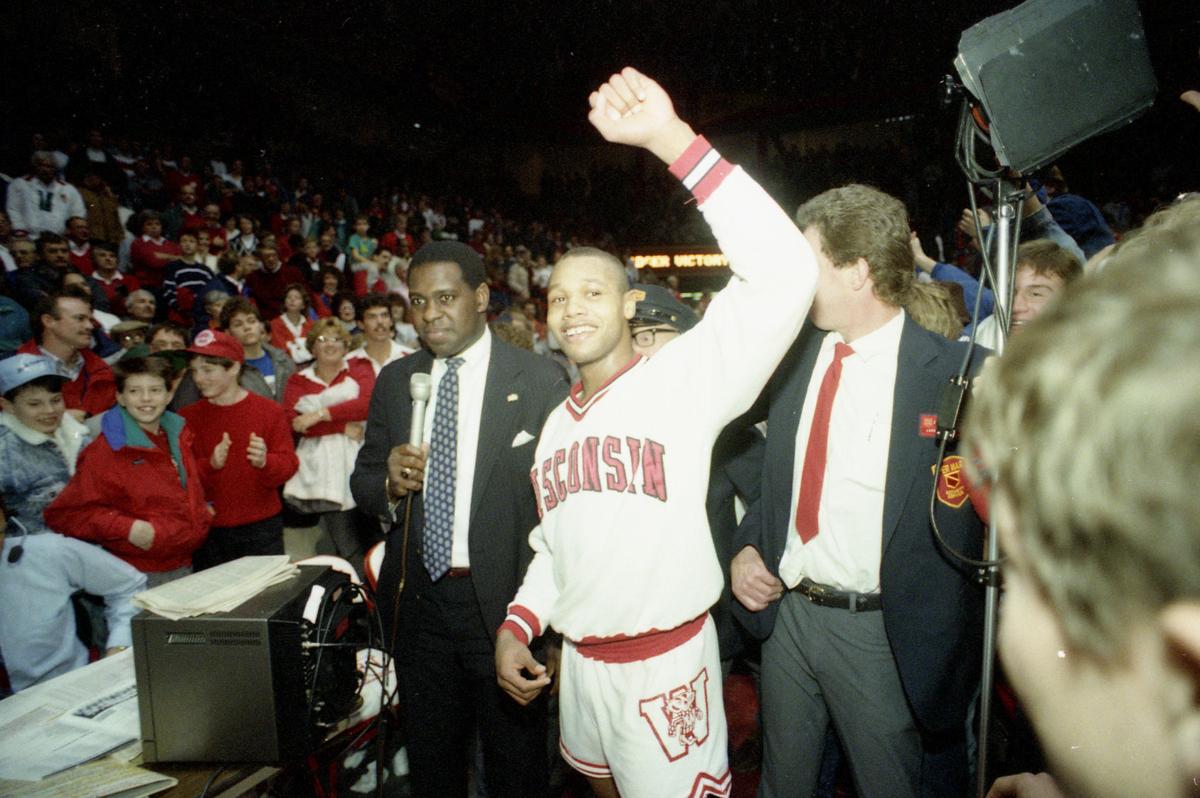 During his junior year of high school in Harvey, Illinois, Tracy Webster went to one of his hangouts and couldn’t take his eyes off a basketball game on the corner television set in which the University of Wisconsin was blowing out fifth-ranked Illinois by 20 points.

“I watched Trent Jackson against Illinois and this guy is making shot after shot after shot after shot,” said Webster, who lives in Atlanta. “I’m sitting in the barbershop and my barber was a guy named Stan and he said, ‘You like them?’ Now, their television was messed up and you could hardly see the game, but I knew what I was watching. That made me think about Wisconsin a little bit more.”

You all know the rest of the story. Webster signed with UW, was a Pied Piper for fellow Chicago-area stars Michael Finley and Rashard Griffith and in 1994 led the Badgers to their first NCAA tournament appearance in 47 years.

Many credit Webster and his teammates for taking the first step in the stunning reversal of UW’s basketball fortunes, but, as Webster’s story indicated, the Badgers’ hoops renaissance actually had its beginnings five years earlier, when Jackson, Danny Jones and their teammates energized the program by reaching the NIT after making a strong run at an NCAA tournament bid. UW’s 18-12 record in 1988-89 not only opened the recruiting door in Illinois for coach Steve Yoder, it broke the seal for a program that had gone 42 years without a postseason bid of any kind.

It may not seem like much given the incredible success UW has had since then, but beating a string of ranked teams in a loaded Big Ten Conference, putting itself on the NCAA bubble and playing two NIT home games were all big deals for a program that had been dormant for 40 years. For the players and the suddenly engaged fan base, the heartbreak of seeing their NCAA bid fall just short on a drama-filled Selection Sunday quickly gave way to the realization that UW wasn’t done playing.

“There was a sense of disappointment and that quickly turned into a sense of accomplishment,” said Jackson, who lives in Madison. “I didn’t really realize back then that it had been 42 years since the school had been to a tournament. So there was a sense of accomplishment that, for lack of a better way of saying it, the 1989 team broke the curse on the program. And now going to the NCAA tournament is a regular thing even to the point where last year we turned down an invitation to (be considered for) the NIT. That shows how far we’ve come and how the expectations for the program have changed.”

The season that got the ball rolling at UW began with an eight-game summer trip to Europe, a bonding exercise for an experienced team that was built around the formidable inside-outside presence of Jones, a junior forward who scored 20.1 points per game, and Jackson, a senior guard who averaged 19.1. They are still fifth and eighth, respectively, on the school’s all-time scoring list.

The supporting cast had veteran big men Darin Schubring and Kurt Portmann, sharpshooter Tim Locum, slasher Willie Simms and point guard Tom Molaski, a steady presence even though he was playing out of position. The team had returned virtually intact from the previous season, so roles were well-defined from the start.

Most of the players, along with Yoder, will be at the Kohl Center when the team is honored on its 30th anniversary during Saturday’s game against Michigan. So what made that UW team different from so many that went before it?

“I would not have had as much success without Danny Jones and vice versa,” Jackson said. “And then we had some key guys who stepped up and would make key baskets or get a key rebound throughout the year. One who comes to mind is Tim Locum. I would have the ball, I’d throw it in to Danny, they’d double Danny, Danny would kick it back to me and, if they recovered in time, there’s (Locum) over there in the corner. We’d skip pass to the corner and he would knock those shots down.”

The Badgers also led the Big Ten in scoring defense that season.

What made UW’s breakthrough more amazing was the strength of the Big Ten that season. Illinois, Big Ten champion Indiana, Michigan and Iowa were No. 4 seeds or better in the NCAA tournament. Michigan and Illinois reached the NCAA Final Four and the Wolverines won the title.

“I remember we had a string of Saturday wins,” said Locum, who lives in Omaha, Nebraska. “We played Illinois and Iowa and Michigan and they were all ranked, they were all Saturday noon games and it was three out of (five) weeks. The excitement that generated was huge. It was like every weekend you had this great experience and the next weekend was a little bit better and the next weekend was a little bit better than that. It’s hard now to get people to appreciate it that weren’t there, but if I talk to my kids or I talk to friends, I say, ‘Listen, you’ve got to understand, the excitement was literally Final Four level.’ That’s what it seemed like. It was so long since people had that type of successful basketball to root for. It went from zero to 60 really fast.”

The Badgers hit a roadblock late in the season with four of their last five games away from the UW Field House. On the tough final weekend, UW lost at Indiana, a team it hadn’t beaten in 19 tries, and at Michigan State in the last game ever played at Jenison Field House. That left UW tied for sixth in the Big Ten with an 8-10 record in an era when few teams with a losing conference record made the tournament (UW’s 1993-94 team did make it with an 8-10 Big Ten mark).

“Times change and the bottom line is, if you win enough games, you’re in,” Locum said. “We can look back over the course of that season and we could probably find one or two more games that we could have or should have won. If you do that, then the argument goes away.”

Fifth-place Minnesota, which had a 9-9 Big Ten record and a similar resume, made the tournament, which meant UW was one win away from making the NCAA field. Yoder said Big Ten commissioner Jim Delany told him UW was the last team eliminated by the selection committee.

“The one thing I always regret with that particular team is, just from a coaching standpoint, I couldn’t get them to understand really how good they were, how good they could be,” said Yoder, who lives in Sarasota, Florida. “But they played hard. They would compete. They always gave great effort.”

In the end, it wasn’t quite enough to get the Badgers where they wanted to go. Not in 1988-89 anyway. But that group did start to pave the way for a very bright future.

Ethan Happ had a really good game, finishing with 31 points, 13 rebounds and six assists. But one other big number – his eight turnovers – played a big role in the Badgers (11-5, 3-2 Big Ten) losing their second consecutive home game.

Get ready as Wisconsin Badgers prepare to host No. 2 Michigan Wolverines