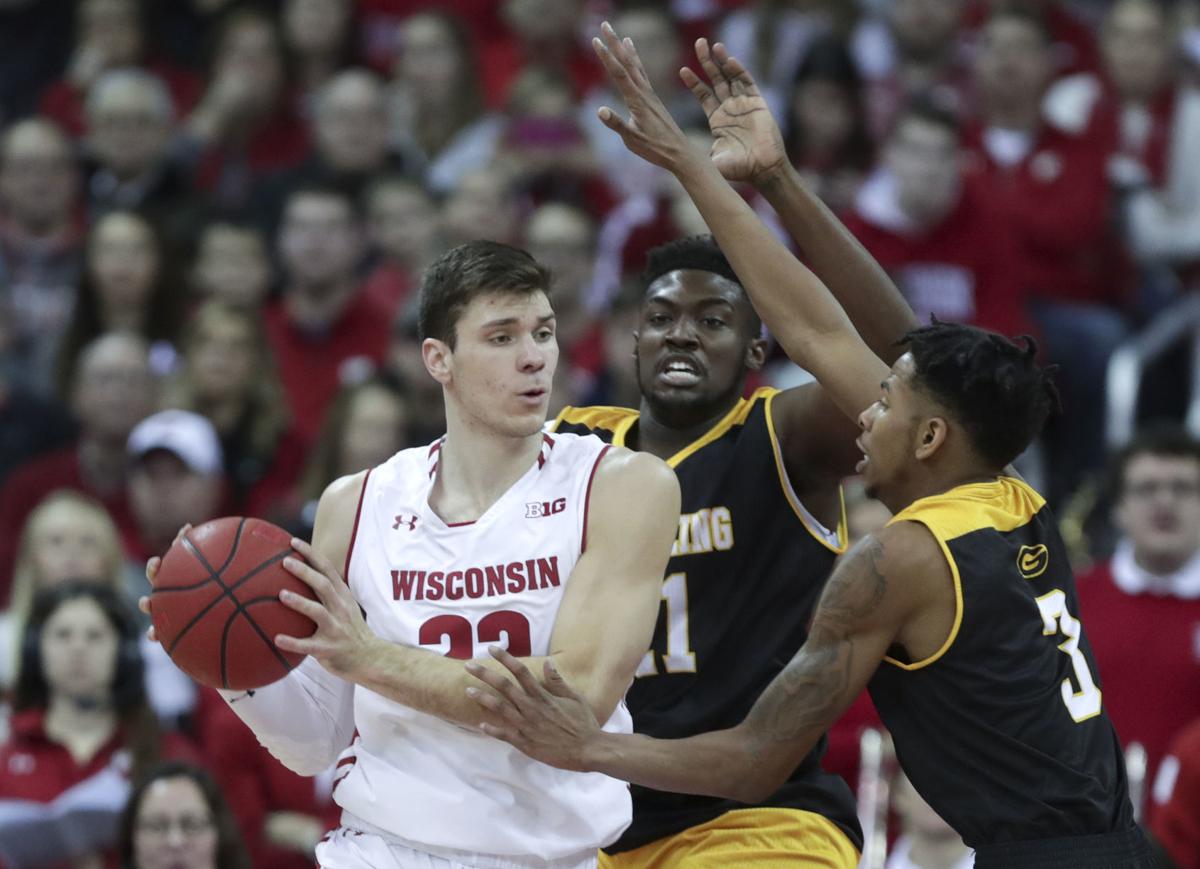 UW center Ethan Happ is averaging 19.2 points, 10.7 rebounds and 4.8 assists through 13 games of his senior season. 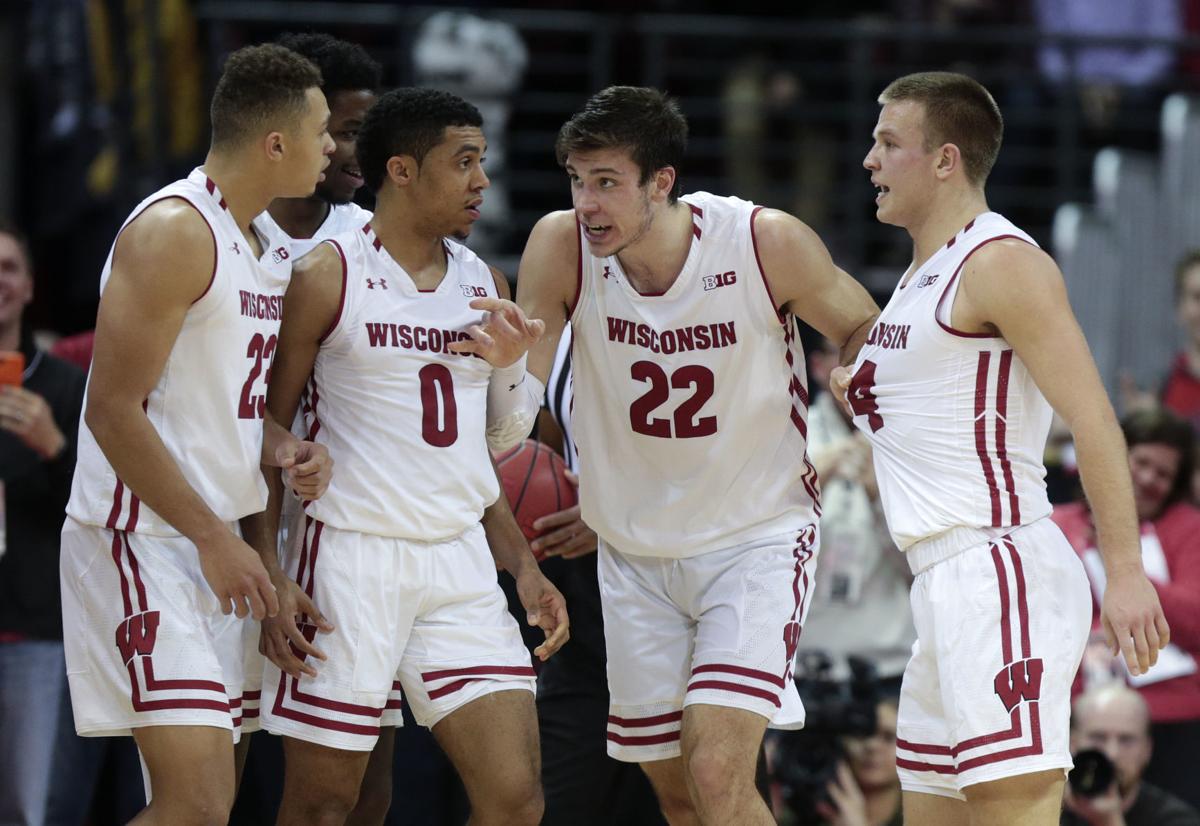 From left, UW players Kobe King, D'Mitrik Trice, Ethan Happ and Brad Davison huddle up during their signature win over North Carolina State on Nov. 27 at the Kohl Center.

The way Ethan Happ sees it, his first Big Ten Conference championship has a giant asterisk next to it.

Happ was redshirting as a true freshman during the 2014-15 season when the Frank Kaminsky-led Badgers rolled to a sweep of the Big Ten regular-season and tournament titles.

“I had people on the team telling me all year long that you’re a huge part of this team, helping prepare the guys,” Happ said. “But at the same time I wasn’t out there on the court when it was game time. Obviously, I’ll cherish the moments forever that I spent with that team, but I’ve been hunting a Big Ten title for myself.”

That pursuit will continue tonight when No. 22 UW (10-3, 2-0 Big Ten) resumes conference play with a game against Minnesota (11-2, 1-1) at the Kohl Center. It will start a stretch of 18 games in 67 days for the Badgers, who begin that grind as a contender but hardly the favorite.

Considering the depth in the Big Ten this season and the conference’s move to a 20-game schedule, winning a championship may be more challenging than ever. KenPom projects Michigan to claim the title outright with five losses, followed by Michigan State (14-6) and UW (13-7).

“It is our end goal,” UW sophomore guard Brad Davison said of winning a Big Ten title. “That’s what we get to focus on now. Non-conference time is behind us and we have to learn from it. And now our whole season is in front of us and that’s something that’s very exciting.

“But in order to win the Big Ten, we have to take things one day at a time, one possession at a time and take care of what’s right in front of us.”

The Badgers are one of five teams nationally to be ranked in the top 20 in both offensive and defensive efficiency, per KenPom. UW is the only Big Ten team in that group, which also includes Duke, Virginia, Kansas and North Carolina.

But unlike Michigan (No. 4 in defense) and Michigan State (No. 5 offense), the Badgers aren’t great on either end of the floor. They’re No. 19 in defense and No. 18 in offense, according to KenPom.

An 83-76 loss at Western Kentucky on Saturday highlighted three specific areas that could keep UW from achieving its goal of winning a Big Ten title.

Western Kentucky finished the game with 40 points in the paint and averaged 1.38 points per possession after halftime. UW coach Greg Gard has stressed to his team the importance of producing “kills” — segments of three or more empty possessions by the opponent — and the Badgers only had one kill after halftime in Bowling Green.

In fact, the Hilltoppers scored on 25 of their 39 possessions in the second half while shooting 67.9 percent from the field and generating 53 points.

“Everybody’s got to be on the same page,” UW assistant coach Joe Krabbenhoft said. “You’ve got to become so connected defensively. Everybody talks about how well a good offensive team moves the ball, shares the ball, plays off one another. We value playing off each other, being in sync defensively probably more than we even do offensively. We’ve got a lot of areas where we need to continue to grow and get better.”

UW is shooting 39.1 percent from beyond the arc on the season, which ranked behind only Michigan State among Big Ten teams heading into the second wave of conference play.

But poor perimeter shooting has been a common thread in all three of the Badgers’ defeats. They’re 13 of 56 (23.2 percent) in those games, which includes a 2-for-11 performance against Virginia and a 5-for-24 showing vs. Marquette.

The Badgers’ three signature wins — Oklahoma, North Carolina State and Iowa — wouldn’t have been possible without big games from sophomore point guard D’Mitrik Trice, who averaged 21 points and was a combined 15 of 21 from beyond the arc in those games. On the flip side, Trice is 2 of 14 (14.3 percent) from 3-point range in UW’s three losses.

Senior forward Khalil Iverson chipped in 10 points at Western Kentucky to become the 10th UW player to reach double figures in at least one game this season. But on a night in which Happ and Trice were a combined 13 of 35 from the field, the Badgers’ other complementary pieces were mostly quiet.

To be fair, it’s not an easy gig. The offense runs mostly through Happ, Trice and, to some degree, Davison, leaving precious few scoring opportunities for the other players on the floor. Developing any sort of rhythm is a challenge for players who seldom have the ball in their hands.

That said, UW’s best performances this season have included scoring help from beyond the Big Three: King scored 14 points and sophomore forward Nate Reuvers had 12 vs. Oklahoma, sophomore forward Aleem Ford had 12 against North Carolina State and junior guard Brevin Pritzl contributed 12 in the win at Iowa.

There’s little doubt it will take an all-hands-on-deck effort for Happ to get the conference title without an asterisk attached to it that he so desperately craves. The Badgers are aware an effort like the one at Western Kentucky isn’t going to cut it in Big Ten play.

“I’m sure the coaches are going to turn it up a notch in practice and we’ve just got to respond well to it,” Happ said. “We’re lucky that we played so poorly in this game and not against Minnesota. Hopefully, it’s out of our system and now we’re on to Big Ten play.”

Get ready as No. 22 Wisconsin Badgers prepare to resume Big Ten play against Minnesota Golden Gophers

Sophomore guard Taveion Hollingsworth scored 22 points and Dalano Banton nearly had a triple-double to left the Hilltoppers to an 83-76 upset win over the No. 15 Badgers on Saturday in Bowling Green, Kentucky.

Coming off finals and heading into the holidays, games are often sloppy because players’ minds are focused on other things. But, for the most part, Greg Gard’s team did a good job of navigating through the fog on Saturday.

UW makes the switch from the Sterling ball to the Wilson ball, the basketball used in the NCAA tournament.

Sophomore guard Brad Davison finished with a season-high 24 points, senior center Ethan Happ posted his 40th career double-double and No. 16 Wisconsin rolled to a 101-60 victory over Savannah State on Thursday at the Kohl Center.

Look for battle on the boards between Badgers, Gophers Thursday night

Minnesota's Jordan Murphy and UW's Ethan Happ are the top rebounders in the Big Ten this season, and on pace to finish second and third in conference history.

Ethan Happ scored 17 points and Nate Reuvers added 12 for Wisconsin (10-4, 2-1), which couldn’t overcome a miserable shooting performance from 3-point range and the free throw line and some costly mistakes down the stretch.

The 22nd-ranked Wisconsin Badgers men's basketball team fell to the Minnesota Golden Gophers, 59-52, on Thursday night at the Kohl Center in M…

Minnesota showed up at the Kohl Center and hung a 59-52 defeat on 22nd-ranked Wisconsin in the first of an 18-game march to, well, March.

Wisconsin State Journal reporter Jim Polzin asked Badgers fans on Twitter what they thought of No. 22 Wisconsin's 59-52 loss to Minnesota on T…

Get ready as No. 22 Wisconsin Badgers prepare to take on Penn State Nittany Lions

That determination that had been lacking in the No. 22 Badgers at times during a two-game losing skid was there from the opening tip until the final buzzer at Bryce Jordan Center.

Wisconsin State Journal reporter Jim Polzin asked Badgers fans on Twitter what they thought of No. 22 Wisconsin's 71-52 win over Penn State on…

UW center Ethan Happ is averaging 19.2 points, 10.7 rebounds and 4.8 assists through 13 games of his senior season.

From left, UW players Kobe King, D'Mitrik Trice, Ethan Happ and Brad Davison huddle up during their signature win over North Carolina State on Nov. 27 at the Kohl Center.