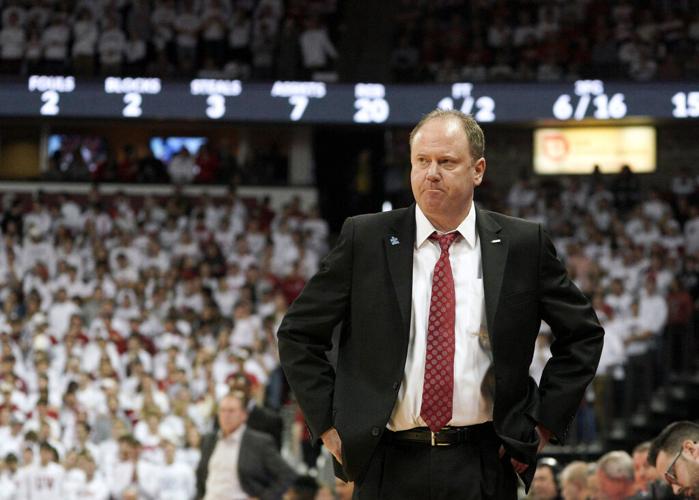 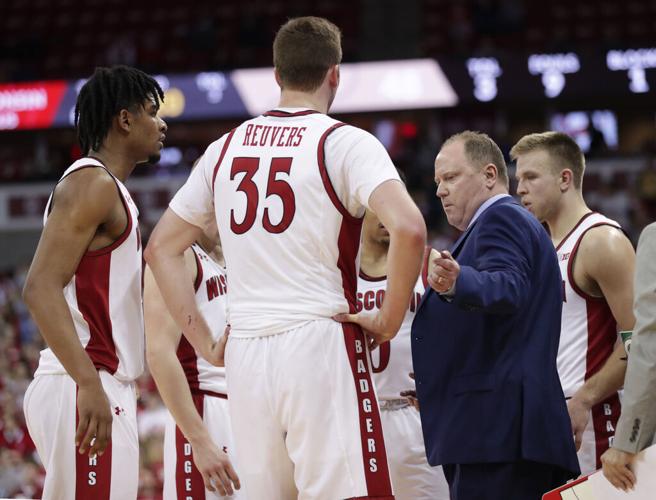 UW men's basketball coach Greg Gard talks to his team during the Feb. 18, 2020, game against Purdue at the Kohl Center. The Badgers held on for a 69-65 victory. 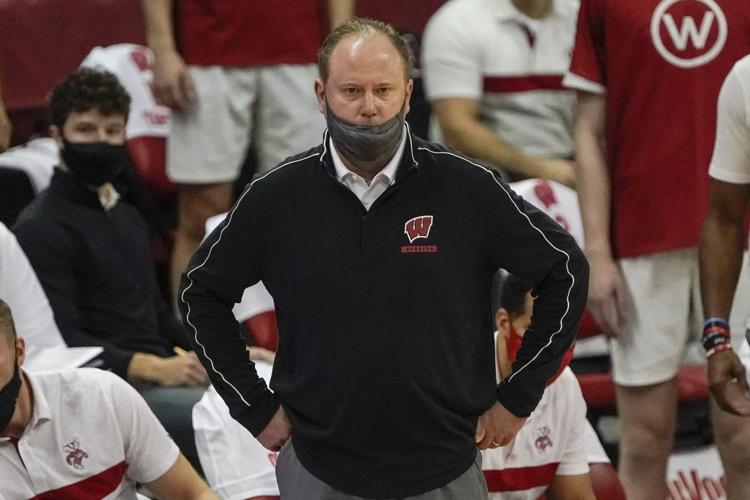 Greg Gard is 119-70 overall and 69-45 in Big Ten play during his five-plus seasons in charge of the UW men's basketball program.

Greg Gard has a right to be angry that someone secretly recorded a Feb. 19 meeting the seniors on the University of Wisconsin men’s basketball team had requested to get some things off their chest.

So do nine other people in that room who thought the conversation was private. Their trust was violated by the person who made sure a 37-minute portion of that two-hour meeting — the part where seven players take turns venting their frustration toward Gard — ended up in my email inbox late Monday afternoon.

As a fan, you may be disgusted as well by this act of betrayal. That’s been the overwhelming sentiment on my Twitter timeline.

And if this all makes you feel uncomfortable about the direction the program is headed, well, you’re not alone.

I’ve been told over and over since Monday that difficult discussions happen behind closed doors in pro and college athletic programs all the time. They’re opportunities to vent and make sure everyone’s on the same page.

But multiple former athletes I checked in with Tuesday thought this sounded different. It was seven players directing pointed criticism at a coach, one by one until everyone had spoken at least once, and it went on for a long time. Even if the hour-plus of that meeting we didn’t hear painted a completely different picture, it was jaw-dropping to hear some of the things the seniors had to say during the recording.

Even more telling was what wasn’t said Monday when I reached out to players for comment. The only player who went to bat for Gard on the record was Brad Davison, the only one in the group who’s returning to the team for the 2021-22 season.

Another player thought the session was productive and appreciated that Gard was willing to sit and listen for that long without interrupting. But that same player didn’t want to be identified because he’d reiterated some of the same complaints that were brought up that day.

Others, given the chance to add context to the meeting or go to bat for their former coach, chose to remain silent.

I covered this program for 10 seasons before pivoting to a new role this month and, since Gard took over, have watched cracks slowly develop in a culture that has been a major part of the Badgers’ sustained success.

That was one of the purposes of the meeting, as Davison clearly stated while batting leadoff for the players. For as much as the word was used, Davison and the others believed the culture had deteriorated and said they wanted to fix it both to save the season and put the program in a good position going forward.

What was telling over the course of the next 30 minutes of feelings being spilled was the who and when of this meeting. It wasn’t freshmen expressing their feelings early in their careers. It was veterans telling a coach they didn’t feel close to him with four regular-season games remaining in their careers.

For Aleem Ford and D’Mitrik Trice, it was their fifth season in the program. For Davison, Trevor Anderson, Walt McGrory and Nate Reuvers, their fourth. Micah Potter had been at UW for 2½ seasons by that point.

If your takeaway from the recording is that these are a bunch of soft players, I’d ask you to consider a couple things: The same group fought through a great deal of adversity, including the Moore family tragedy, to win a share of the Big Ten title in 2019-20. They also had to deal with the stress of playing in the midst of the COVID-19 pandemic.

Did the seniors to some degree crack under that pressure in 2020-21? Yes.

But so did their leader.

Somewhere along the line, the seniors began to feel disconnected from Gard and thought he was to blame. They felt there was a barrier between them and their coach, so it’s no wonder the Badgers looked so disjointed on the court during an underwhelming season that began with such high expectations.

What Gard needs to do is use this experience as a chance to learn and grow. He needs to adjust his coaching style to adapt to a new generation of athletes. That doesn’t mean he has to coddle players, but he certainly needs to find a way to do a better job of relating to them.

What’s apparent after talking to former players over the years is they have a difficult time completely buying into what Gard’s selling. They believe he’s a good man deep down, but he loses them when he tries to be something he’s not.

Gard was a longtime lieutenant for Bo Ryan, who had a knack for getting under players’ skin to get the best out of them. They didn’t always like what he was saying or how he was saying it, but they respected him.

The biggest complaint I’ve heard during Gard’s run of 5½ seasons is that he’s trying too hard to be like Ryan. When Gard says something nasty, it comes off as fake because he’s a nice guy off the court.

Plus, at least with this group, Gard’s personal attacks only unified an already tight-knit group. When he made demeaning comments toward an individual, it rallied the troops and turned them against Gard. When it happened over and over in group settings, it only strengthened the seniors’ bond and widened the gap between them and Gard.

That frustration had been building since at least last season, when the Kobe King saga played out and some teammates showed public support for him after the former La Crosse Central standout left the program midway through Big Ten play. And it came pouring out once again over 37 minutes in that Feb. 19 meeting.

The aftermath, now that a recording of that session has been shared, leaves Gard with a lot on his plate.

There’s the challenge of dealing with negative recruiting — you think opposing coaches aren’t going to use the fact that Ford said he wouldn’t even send his son here? — but that’s not the biggest challenge for Gard.

His first order of business this offseason needs to be reestablishing a culture. If you’re thinking the departure of nearly every player from a disgruntled senior class will solve a lot of those issues, please remove your head from the sand. The unhappiness spread beyond the veterans.

There’s a lot that goes into a team’s culture, but what has made UW’s a strong one for years was that players cared more about the name on the front of the jersey than the one on the back. Moreover, there was a sense of cohesion, with players and coaches working together for one common goal. Potter telling Gard in the recorded meeting that “it genuinely doesn’t feel like you’re for us” was only one example of the chasm in a program that constantly promotes itself as a family.

For Gard, this is a chance to look in the mirror. He, by all accounts, is terrific at the X’s and O’s of coaching. What he needs to do better is finding ways to connect with his players and get the most out of their talent.

While the 2021-22 season was going to be a chance to hit the reset button anyway because of the roster turnover, this piece of offseason mayhem makes it even more of a starting-over point.

Nothing that came out in that recording makes me believe Gard’s job should be in jeopardy at this point. He’s a respectable 119-70 overall and 69-45 in Big Ten play, a step back from Ryan’s magnificent production but still at a top-25 level nationally. He was named the Big Ten Coach of the Year about 15 months ago.

But Gard’s handling of players, his response to this crisis and whether next season brings any hope are things to be considered by new UW athletic director Chris McIntosh when he evaluates the program next spring.

It basically comes down to this: Can Gard fix this problem?

His focus for now needs to be on forming relationships, building trust and establishing a culture. There are some difficult conversations for Gard to have with those in his program and, for the Badgers’ sake, those discussions hopefully will remain behind closed doors this time.

UW will play the Friars as part of the series between the Big Ten and Big East conferences.

During key recruiting period, one Wisconsin men’s basketball target says he will continue to 'build my relationship' with Greg Gard

Gus Yalden, a Badgers recruiting target originally from Appleton, doesn’t seem too focused on the leaked recording of the February meeting between coach Greg Gard and the seniors.

The father of Virginia catcher Logan Michaels, a former DeForest and Madison Area Technical College standout, became a hit at the College World Series after his story about surviving pancreatic cancer was shared on ESPN2.

Former Wisconsin prep star Kobe King, who played for the Badgers, committed to Nebraska and hired an agent to pursue a pro career, has landed at Valparaiso for the 2021-22 season.

The school's all-time leading scorer appeared to defend himself against recent allegations he tried to undermine coach Greg Gard while on the Badgers’ coaching staff.

Red Zone podcast: A not-so-secret podcast about a secret recording

State Journal beat reporters Colten Bartholomew, Todd Milewski and Jim Polzin get together over Zoom to discuss the state of Wisconsin men’s basketball after audio from a meeting between players and coach Greg Gard was released.

The school's decision comes as COVID-19 case counts decline in Wisconsin and follows a pattern set by the state’s professional teams.

Southern Wisconsin could see 2 inches or more of rain by Sunday, according to forecasters.

Here's a look at how Chris McIntosh's first contract as Wisconsin athletic director compares to the one Barry Alvarez had.

The Wisconsin guard was one of 12 players to make the final roster for the team, which will play for the FIBA U19 World Cup in Latvia.

UW men's basketball coach Greg Gard talks to his team during the Feb. 18, 2020, game against Purdue at the Kohl Center. The Badgers held on for a 69-65 victory.

Greg Gard is 119-70 overall and 69-45 in Big Ten play during his five-plus seasons in charge of the UW men's basketball program.