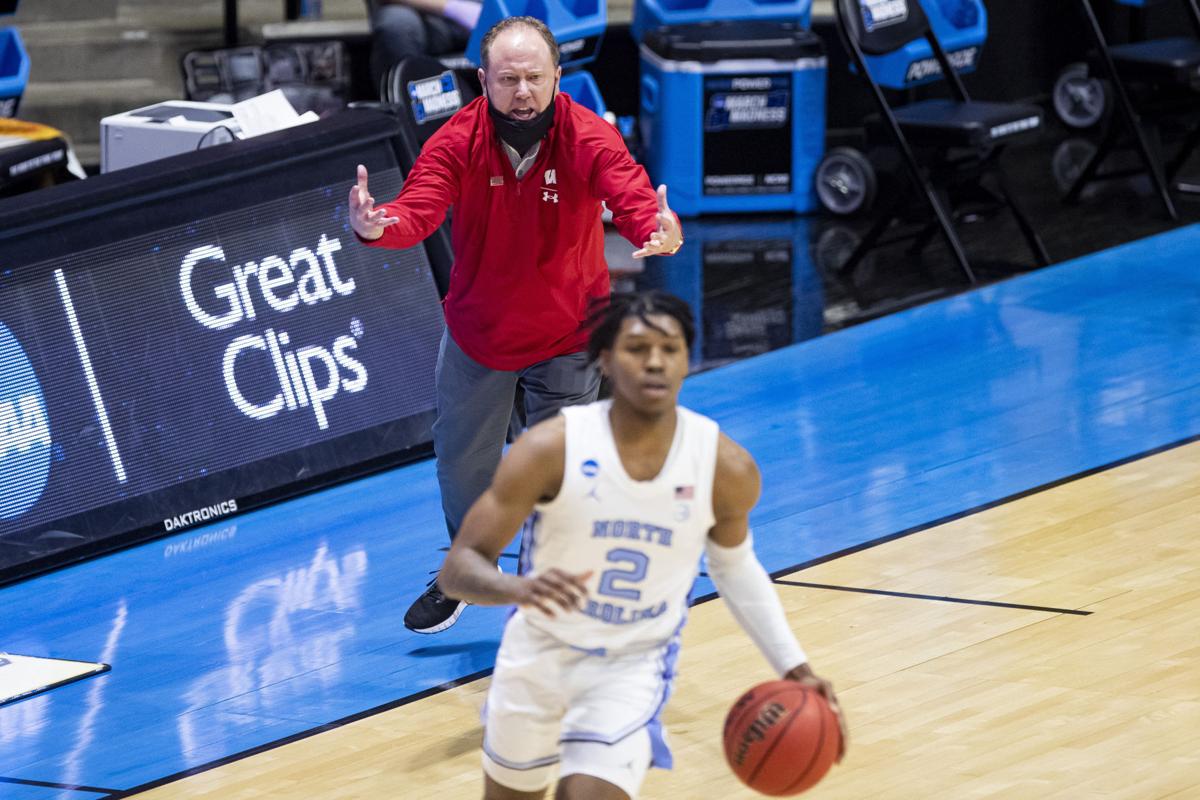 Wisconsin coach Greg Gard, top, yells to his team on defense as North Carolina's Caleb Love (2) moves the ball downcourt during the second half of a first-round game in the NCAA men's college basketball tournament, Friday, March 19, 2021, at Mackey Arena in West Lafayette, Ind. 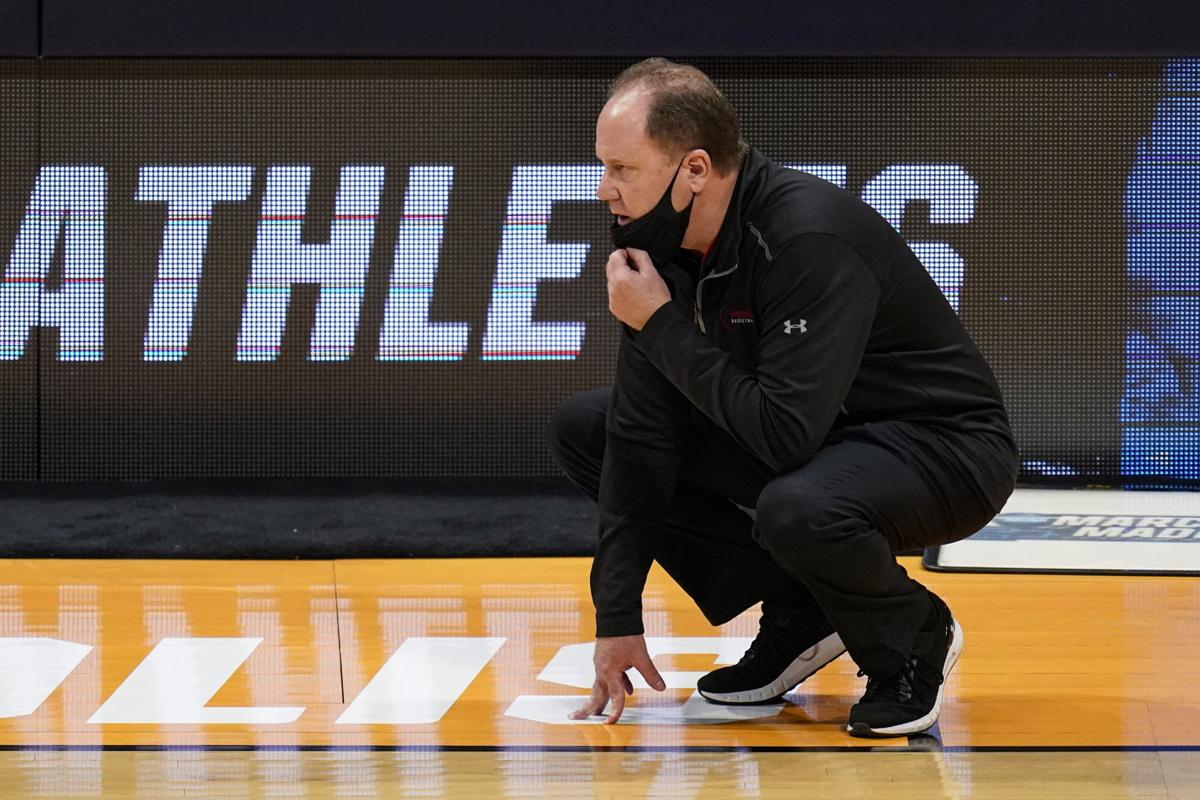 Wisconsin coach Greg Gard watches from the sideline in the second half of a second-round game against Wisconsin in the NCAA men's college basketball tournament at Hinkle Fieldhouse in Indianapolis, Sunday, March 21, 2021.

The summer is a key recruiting period for men’s basketball, and the University of Wisconsin not only has to work on filling roster spots, but has the added challenge of the issues during last season that were revealed through leaked audio earlier this week.

The Badgers hosted two Rivals.com three-star targets — Rowan Brumbaugh, a point guard from Northfield, Massachusetts, and Braeden Moore, a forward from Nashville — less than a week before the audio of the Feb. 19 meeting between Badgers coach Greg Gard, his assistants and the team’s seven seniors became public.

The audio exposed a rift between Gard and the seniors, with players saying they feel unable to form a relationship with the coach and their voicing an overall displeasure with the culture of the program.

Gard has had limited time to address with recruits what was said in that meeting about the cracks in the program’s foundation. But Gus Yalden, a Class of 2023 247sports.com four-star center originally from Appleton, doesn’t seem too focused on the meeting or leaked recording.

“I don’t have an opinion about the conversations the players and coach Gard had, I wasn’t there,” Yalden said in a statement to the State Journal. “I fully intend on continuing to build my relationship with coach Gard as well as the rest of the Badger coaching staff as I move through the remainder of my college decision making process.”

UW has offered scholarships to nine individuals in the class of 2022, according to 247sports.com. Three of those nine have committed elsewhere, leaving six remaining and only Brumbaugh, Moore and Huff have made it to campus.

The NCAA is in a quiet period, which means a coach only may have face-to-face contact with college-bound student-athletes or their parents on the college’s campus. The exceptions in June are two evaluation periods — June 18 to 20 and this weekend, which means coaches already hit the road to watch recruits play in tournaments. Men’s basketball heads into a dead period July 6, where Gard and other college coaches cannot talk to recruits in person and aren’t allowed to watch recruits compete. The next time a coach can speak to a player face-to-face after July 5, with few exceptions, is during the quiet period July 26 to 31.

Players have until April 13, 2022, to officially make their decision, however the early signing date is Nov. 10.

Hepburn was named the Gatorade Player of the Year in Nebraska last season after helping Bellevue West go 21-3 and win the Class A state title. A two-time first-team all-state pick, Hepburn averaged 17.7 points, 6.1 assists, 4.6 rebounds and 3.1 steals as a junior. Off the court, Hepburn earned the HomeSchool Papillion TeenService Award and was a Special Olympics Volunteer Award winner.

UW coach Greg Gard: “Chucky is a proven winner. Our staff watched as he led his Bellevue West team to a state championship last winter. A true point guard, Chucky brings everything we look for at that position. He leads by example, always giving maximum effort on both ends of the floor. He has tremendous vision and feel for the game, combined with the ability to score from all three levels. As much as he is able to carry his team on offense, what makes Chucky a great fit here at Wisconsin is that his defense and toughness is where he hangs his hat. A leader and role model in the community and a motivated student, Chucky is the kind of person we are excited to add to our Badger Family. We’re excited to get to work with him and to help him reach his potential as a Badger in the years to come.”

Hodges, who played in the same Illinois Wolves AAU program that produced former UW standout Frank Kaminsky, was named Mid-Suburban League West Player of the Year after helping Schaumburg go 25-7 and winning the MSL title while advancing to the regional finals. He averaged 15.5 points, 8.0 rebounds and 2.0 blocks per game to earn second-team Class 4A all-state honors in Illinois.

Gard: “Chris is an excellent addition to our program and member of another strong recruiting class. He impressed our staff immediately during our advanced camp and has continued to improve since. Chris has tremendous potential with his large frame and natural strength, paired with an eagerness to get better. He will immediately bring both physicality and tenacity to our program. Chris fits in well with the work ethic and culture that our program has established. He comes from a great family that has clearly taught him to value hard work and education first. We are excited to welcome both Chris and his family to the Badger Family.”

Mors is the reigning back-to-back Gatorade Player of the Year in South Dakota and has been named all-state four times during a career that began when he played on the varsity in the seventh grade. He averaged 19.4 points, 8.2 rebounds, 2.9 assists and 2.1 steals per game as a junior and enters his final season as South Dakota’s Class AA all-time leading scorer with 2,127 points.

Gard: “We are very excited to add Matthew to our program. He has challenged himself as a student-athlete year in and out to become as well rounded a competitor as possible, both on and off the court. As a state champion in basketball and a successful multi-sport athlete in Yankton, Matthew has gained valuable lessons that will help him become the best leader and player possible. On the court, he plays with a certain level of toughness and physicality that fits our style of play, specifically in the Big Ten. He has a versatile skill set that will allow him to be effective in the post, off the dribble and is a terrific shooter from outside. Matthew's skillset, combined with a championship mentally, has us excited to begin working with him. We're excited for Matthew to join our Badger Family and we can't wait to begin working with him to help him reach his goals as a Badger.”

The Badgers will face the reigning ACC Tournament champion Yellow Jackets in Atlanta.

“I coached for a lot of years and the idea that someone would record and edit a conversation between student-athletes and their coaches is extremely disappointing,” Barry Alvarez said in a statement.

The State of UW men's basketball: A not-so-secret podcast about a secret recording

State Journal beat reporters Colten Bartholomew, Todd Milewski and Jim Polzin get together over Zoom to discuss the state of Wisconsin men’s b…

Red Zone podcast: A not-so-secret podcast about a secret recording

State Journal beat reporters Colten Bartholomew, Todd Milewski and Jim Polzin get together over Zoom to discuss the state of Wisconsin men’s basketball after audio from a meeting between players and coach Greg Gard was released.

Here's a look at how Chris McIntosh's first contract as Wisconsin athletic director compares to the one Barry Alvarez had.

College athletes at UW and beyond will soon profit off their name, image and likeness; here's what you should know

What really is name, image and likeness? How will the University of Wisconsin handle it? Those answers and more here.

Wisconsin coach Greg Gard, top, yells to his team on defense as North Carolina's Caleb Love (2) moves the ball downcourt during the second half of a first-round game in the NCAA men's college basketball tournament, Friday, March 19, 2021, at Mackey Arena in West Lafayette, Ind.

Wisconsin coach Greg Gard watches from the sideline in the second half of a second-round game against Wisconsin in the NCAA men's college basketball tournament at Hinkle Fieldhouse in Indianapolis, Sunday, March 21, 2021.