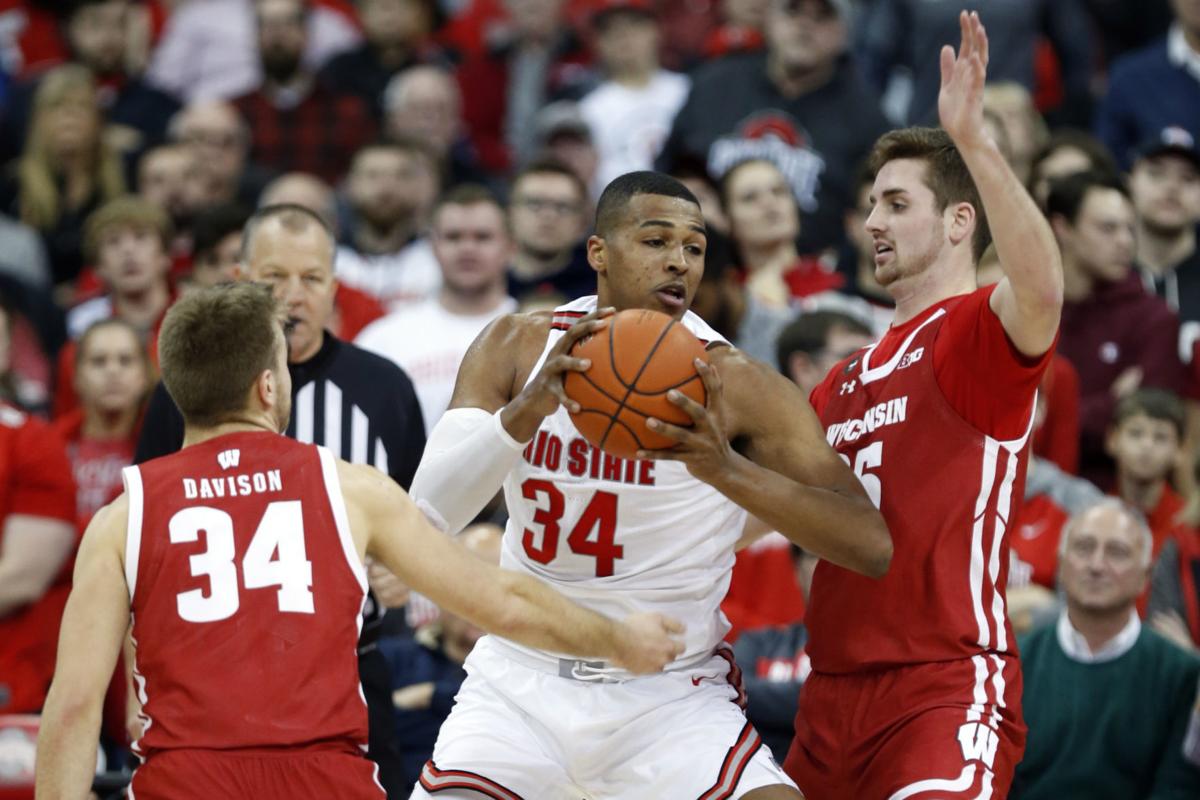 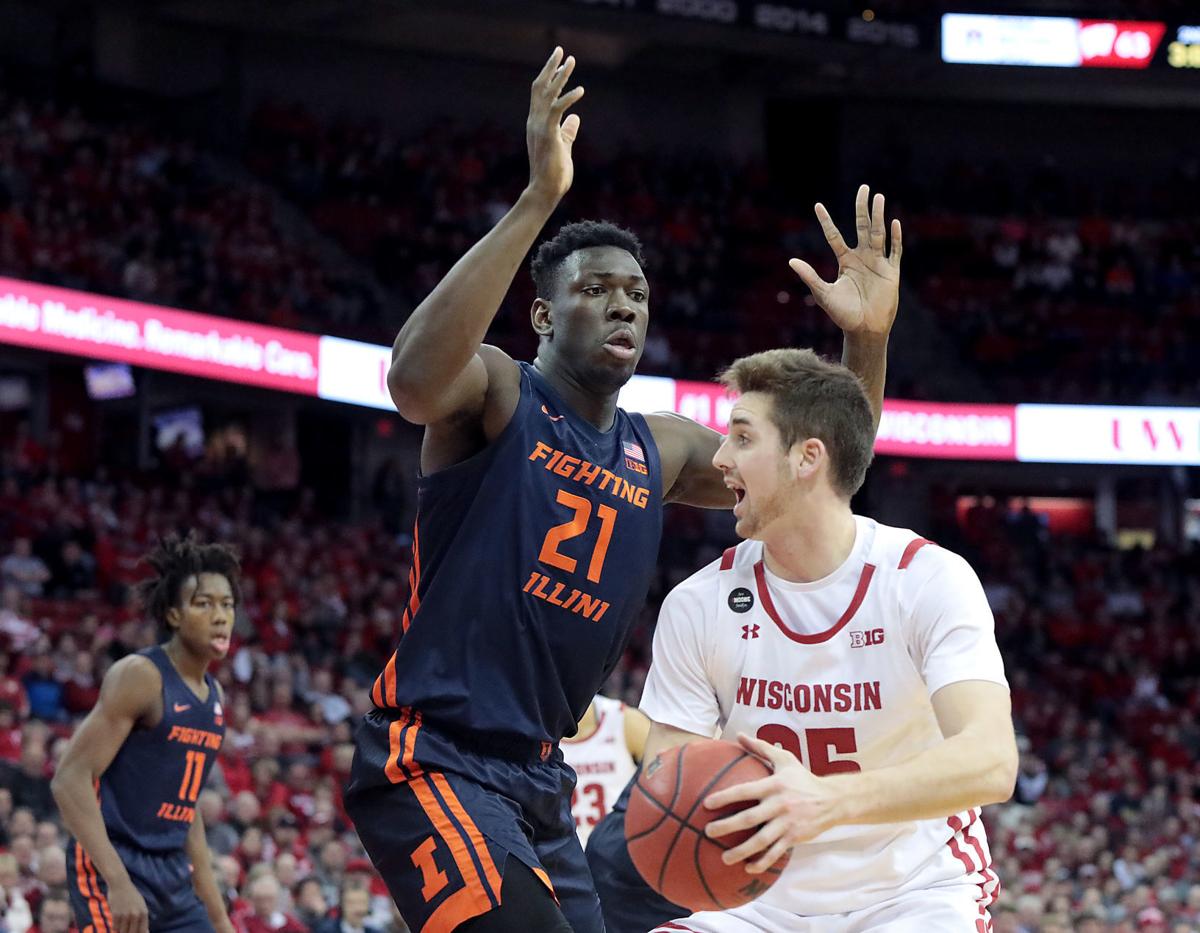 STATE COLLEGE, Pa. — Given the choice to sit or stand for an interview earlier this week, Nate Reuvers opted for the chair.

Considering practice had just ended and the junior big man for the University of Wisconsin men’s basketball team wasn’t even 24 hours removed from a physical game, the decision to conserve as much energy as possible made sense.

This is Reuvers’ third run through Big Ten Conference play, but that doesn’t mean the grind gets any easier. In fact, this particular stretch has tested Reuvers’ body and mind.

Over the course of three games, Reuvers has been matched up with 817 pounds of Big Ten beef at the center position. That run continues Saturday when the Badgers (9-6, 2-2 Big Ten) face No. 20 Penn State (12-3, 2-2) at the Bryce Jordan Center.

Banging bodies with Watkins will complete a nine-day stretch for Reuvers in which he’s also had to go against Ohio State junior Kaleb Wesson (6-9, 270) and Illinois junior Kofi Cockburn (7-0, 290).

Cockburn had 15 points in 24 minutes in the Fighting Illini’s 71-70 victory over the Badgers on Wednesday night at the Kohl Center. That production likely would have been more significant had the top-50 recruit not been plagued by fouls.

Reuvers, too, found himself in foul trouble in both halves. Some of that was unavoidable considering he was giving up 55 pounds to Cockburn, but Reuvers also picked up a cheap foul 75 feet away from the basket after missing a shot. Reuvers was running with his back turned to Illinois guard Trent Frazier when he was whistled for apparently making contact with Frazier.

“I’ve just got to make sure I don’t get any cheap fouls,” Reuvers said, specifically referring to his fourth foul, which came with 6 minutes, 7 seconds remaining in the game. “I guess I hit the dude. I didn’t even notice that. I was running back on defense. I don’t even know what happened. (The coaches) said they looked back in the film and my arm reached back and hit him.”

That came less than a week after Reuvers held his own against Wesson at Ohio State. Wesson did a lot of damage with 22 points and 13 rebounds, but he was held in check down the stretch. Meanwhile, Reuvers scored seven of his team-high 17 points over the final 3:20 to help UW secure a 61-57 victory.

Afterward, Buckeyes coach Chris Holtmann grumbled about how physical the Badgers were with Wesson in the post. “Today’s college game, they can do everything but tackle you across the lane and not get called,” Holtmann said. “We have to figure out a way to play better in those situations when they’re chucking, grabbing and holding.”

Reuvers was as surprised as anyone when Holtmann’s comments were relayed to him, but he also should have considered it a compliment of sorts. Less than a month earlier, Reuvers and the Badgers weren’t nearly as physical as they needed to be during a loss at Rutgers; now, they were being accused of being too physical.

“Coach (Greg Gard) always says don’t let them catch it. If they can’t catch it, they can’t do anything,” Reuvers said, knowing that advice is easier said than done. “For 40 minutes, if a guy wants to catch the ball, at some point he’s going to catch it. It just depends on how deep. If you can get him to catch it further from the lane, their percentages will go down.”

At least Reuvers isn’t going through this basically alone, as he was before junior backup Micah Potter became eligible last month. At 6-10 and 248 pounds, Potter gives UW an experienced option to spell Reuvers.

Prior to Potter joining the rotation, Gard had to be creative with his use of Reuvers. The Badgers’ leading scorer and rebounder was playing too many minutes, but Gard had no choice.

Now, Reuvers can head to the bench when he needs rest.

“It can be tiring,” Reuvers said. “It’s great to have Micah so I don’t have to do that the whole game.”

Potter is still getting comfortable in UW’s system on both ends of the floor. He provided a huge spark in the first half against Illinois and finished the game with 13 points and nine rebounds in 15 minutes.

“Whether I’m scoring 20 points or five points, whatever my role needs to be is what I’m going to do,” Potter said prior to the game against the Illini. “As of right now, I’ve been telling everyone, our goal is the Big Ten championship. So whatever role I need to fill I’m going to do it, and I’ll be happy doing it.”

Even with the addition of a tag-team partner, Reuvers’ offensive efficiency has dipped since UW returned to Big Ten play. He was 3 of 12 from the field against Ohio State, making up for it with a 10-for-12 performance from the free throw line, and he missed seven of his nine shot attempts against Illinois.

Naturally, it’s fair to wonder whether all the work he’s putting in on the defensive end is affecting those shooting numbers. He says that’s not the case.

“I don’t think so,” Reuvers said. “This last game, I had a lot of good looks. Same with Ohio State, a lot of shots I should make. I need to get back in rhythm.”

Nate Reuvers scored 15 points to lead four players in double figures as the Badgers coasted to a 65-37 victory over Rider in a non-conference finale at the Kohl Center.

D’Mitrik Trice scored 21 points and Brevin Pritzl added a season-high 17 in the Badgers’ 68-48 victory over Tennessee on Saturday afternoon at Thompson-Boling Arena.

Get the latest analysis, injury reports and highlights as the UW men's basketball team takes on No. 20 Penn State in a Big Ten showdown Saturday at the Bryce Jordan Center.

Junior forward Micah Potter finished with 24 points and 13 rebounds — both career highs — to lead the Badgers to a 58-49 win over No. 20 Penn State at the Bryce Jordan Center on Saturday afternoon.

Get ready as Wisconsin Badgers prepare to host No. 17 Maryland Terrapins

Brad Davison made two huge plays — one on defense, one on offense — over the span of 3.3 seconds to help the Badgers rally past the No. 17 Terrapins for a 56-54 win Tuesday night at the Kohl Center.

Despite a strong start to Big Ten play this season, the University of Wisconsin men's basketball team was defeated by the No. 15 Michigan Stat…

Wisconsin State Journal reporter Jim Polzin asked Badgers fans on Twitter what they thought of Wisconsin's 67-55 loss to the No. 15 Michigan S…