For most of the 2017-18 season, the options at point guard for the University of Wisconsin men’s basketball team consisted of Brad Davison and … er … well …

“Me?” UW assistant coach Dean Oliver said. “I was next.”

Oliver can joke about it now because the Badgers have depth at the position as they embark on a new season.

That wasn’t the case last season, when the situation UW found itself in during the program’s first losing campaign in 20 years was no laughing matter.

D’Mitrik Trice began the season as the starting point guard and the team’s third-most experienced player in terms of minutes played. But Trice was limited to 10 games because of a foot injury.

Meanwhile, Kobe King also missed the final 23 games of the season with a knee injury. While King’s natural spot is on the wing, he could have provided some depth at the point if necessary.

That left Davison — who, mind you, was playing with an injured left shoulder — and some less-than-ideal Plan B options. Center Ethan Happ helped bring the ball up the court at times, as did forward Khalil Iverson. UW was so thin at the position that Walt McGrory, a freshman walk-on who had planned to redshirt, saw action early in Big Ten play.

This season, UW coach Greg Gard has options at his disposal.

There’s Trice, who’s healthy and, by all accounts, had a strong offseason. There’s Trevor Anderson, who sat out last season after transferring from UW-Green Bay. And there’s Tai Strickland, a true freshman who’s the son of former NBA point guard Rod Strickland.

That list doesn’t even include Davison, whose natural position is shooting guard but will still carry his share of the ball-handling responsibilities.

“We push each other,” Anderson said. “We’re all competitive and want some minutes — and minutes are there, Coach has made that very clear. We’re all just going balls to the wall and I think that just pushes everybody’s playing level up that much more.”

There may not be a Dean Oliver on the roster — he was a four-year starter at Iowa from 1997-2001 and played professionally, including two seasons in the NBA — but UW has solid options in the backcourt.

After playing behind Bronson Koenig in 2016-17, Trice moved into the starting lineup last season and went through growing pains in an expanded role.

While Trice averaged 9.4 points in a team-leading 31.5 minutes per game before his injury, he struggled against tough competition. He went a combined 18 of 59 from the field, including 5 of 28 from 3-point range, in losses to Xavier, Baylor, UCLA, Virginia, Ohio State and Temple.

During the second half of the game against Temple in Philadelphia, Trice began feeling pain in a toe on his right foot. An X-ray the next day revealed he had fractured the fifth metatarsal bone on the side of his foot, and he underwent surgery a few days later.

Trice briefly returned to practice during the second half of the season, but the decision was made to shut him down for the season. Unlike King and Davison, who had surgery once the season ended to repair his shoulder, Trice had the benefit of a full offseason.

He took advantage, too. When UW strength and conditioning coach Erik Helland was asked in September which players had made the biggest strides since the end of last season, one of the first names he mentioned was Trice.

Trice squatted 425 pounds and, according to Helland, “he probably had another 50 pounds in him.”

Gard said Trice has been more physical in preseason practices and the added bulk has allowed the sophomore — he was granted a medical redshirt for last season — to do a better job of absorbing contact.

Oliver has noticed it, too.

“A big thing with him in the offseason was trying to finish better at the rim and gain some strength and finish on drives,” Oliver said. “A lot of that is strength-based and he really worked his tail off as soon as he could. We’re seeing some improvement.”

It probably doesn’t hurt that Anderson is breathing down Trice’s neck.

A right leg injury has limited Anderson in October and forced him to sit out the Red-White scrimmage, but coaches rave about the competitive spirit he’s brought to the team.

Anderson brings Division I experience with him after starting as a true freshman at UW-Green Bay in 2016-17. He averaged 9.8 points and 2.7 assists in 20 starts before a back injury sidelined him for the remainder of the season.

Gard noted that Anderson brings a winner’s mentality to the roster. He helped lead Stevens Point to a pair of WIAA Division 1 state titles and averaged 24.6 points as a senior to earn Wisconsin’s Mr. Basketball honors.

“He’s a great teammate,” Happ said of Anderson, who finished his prep career with 2,360 points. “He tells you how it is. He’s not going to hold back. What he thinks is best for the team, that’s what he’s going to say or do. He raises the level by getting under guys’ skin.”

And then there’s Strickland, who’s completely different to the mix. While he’s the quickest of the three natural point guards on the roster, it remains to be seen if the 172-pound Strickland can hold up physically against bigger, more experienced players.

In time, Strickland could become a solid two-way point guard: a defensive menace who loves to pressure the ball on one end of the court, and a slasher who can drive to the basket and find open teammates on the other end.

“Tai comes into a storm,” Oliver said. “You’ve got three guys that are competing like crazy and now he’s got to step his game up with these guys. I really like it. They’re learning from each other. They’re always competing.”

While it’s easy to think of the point guard battle as Trice vs. Anderson, don’t rule out the two being on the court at the same time with the latter playing off the ball.

And how about three point guards on the court together? That’s possible, too, because Davison has been getting reps at the “3” spot.

In fact, it wouldn’t be shocking to see Gard use a heavy dose of three-guard lineups this season.

“No doubt about it,” Oliver said. “They all shoot the ball really well. They all can drive it. We’re versatile.”

Now that Trice and King are back from their injuries — and Anderson is added to the mix — it’ll be interesting to see how Gard constructs lineups and rotations.

Or how about an all-shooters lineup when Happ is getting a rest: Trice, Davison, Pritzl, King and sophomore forward Nate Reuvers.

While putting Trice and Anderson on the floor at the same time could add some spice to the offense, it remains to be seen how efficient UW would be defensively with those two players in the backcourt.

But Gard now has the option of going with a defense-heavy lineup as well: Davison, King, Iverson, Ford or Reuvers, and Happ.

The good news for Gard is it appears he has far more options than last season, particularly at point guard.

“It’s become a guard’s game,” Gard said. “It’s become position-less, so to speak. The ability to have experience and a multitude of perimeter guys available, it starts with making practice that much more competitive, then that competition level will help raise everybody’s bar and make us a better team.”

Wisconsin coach Greg Gard responded with an emphatic “No” when asked if he had any worries about Happ’s approach to the season after the Badgers' decorated senior big man tested the NBA draft waters.

It’s a Tuesday in October, and Davison has arrived to class 5 minutes early, or — as the sophomore guard for the Wisconsin men’s basketball team sees it — right on schedule.

The sophomore forward is scheduled to undergo surgery on Wednesday, and the Badgers men's basketball team said in a news release that he is expected to return to action at some point this season.

Get to know the preseason AP All-American men's basketball players

“We’re a much closer team,” Brad Davison said. “We do a lot more (together) and it shows on the basketball court. We hold each other accountable, we’re communicating more and we work more as a unit.”

Knee injury behind, Kobe King back up to speed for Badgers

King, a redshirt freshman wing from La Crosse, is rounding back into form after missing most of the 2017-18 season.

The senior center, who flirted with turning pro in the offseason before deciding to return to Wisconsin, finished with 10 points, 11 rebounds and 12 assists to register the second recorded triple-double in program history.

The Wisconsin Badgers men's basketball team defeated the Coppin State Eagles, 85-63, in their season opener on Tuesday night at the Kohl Cente…

Big Ten Conference commissioner Jim Delany, basketball man that he is, no longer wants to surrender November and December to college football.

Illikainen, who will remain enrolled in school, didn’t play in the Badgers’ 85-63 season-opening win over Coppin State last Tuesday.

Get ready as Wisconsin Badgers prepare to take on Xavier Musketeers

Photos: Take a look back at Alex Illikainen's time with the Wisconsin Badgers

With senior Alex Illikainen leaving the University of Wisconsin men's basketball team just as 2018-19 season gets underway, here's a look back…

Villanova is going for its third national title in four seasons, a feat that hasn’t been accomplished since UCLA dominated the sport in the 19…

The Wisconsin Badgers beat the Xavier Musketeers, 77-68, in a Gavitt Tipoff Games matchup on Tuesday night at the Cintas Center in Cincinnati, Ohio.

“It’s kind of like we finally had our shot … to show the world what we’re about this year,” sophomore guard Brad Davison said after the Badgers' victory over the Musketeers. “I think a lot of people kind of still have that Wisconsin from last year in their minds, and we’re not the same team as last year.”

Anderson, a sophomore guard from Stevens Point, sat out last season after transferring from UW-Green Bay.

He averaged 22.5 points and 4.9 assists last season as a sophomore at Orchard Lake St. Mary’s near Detroit. 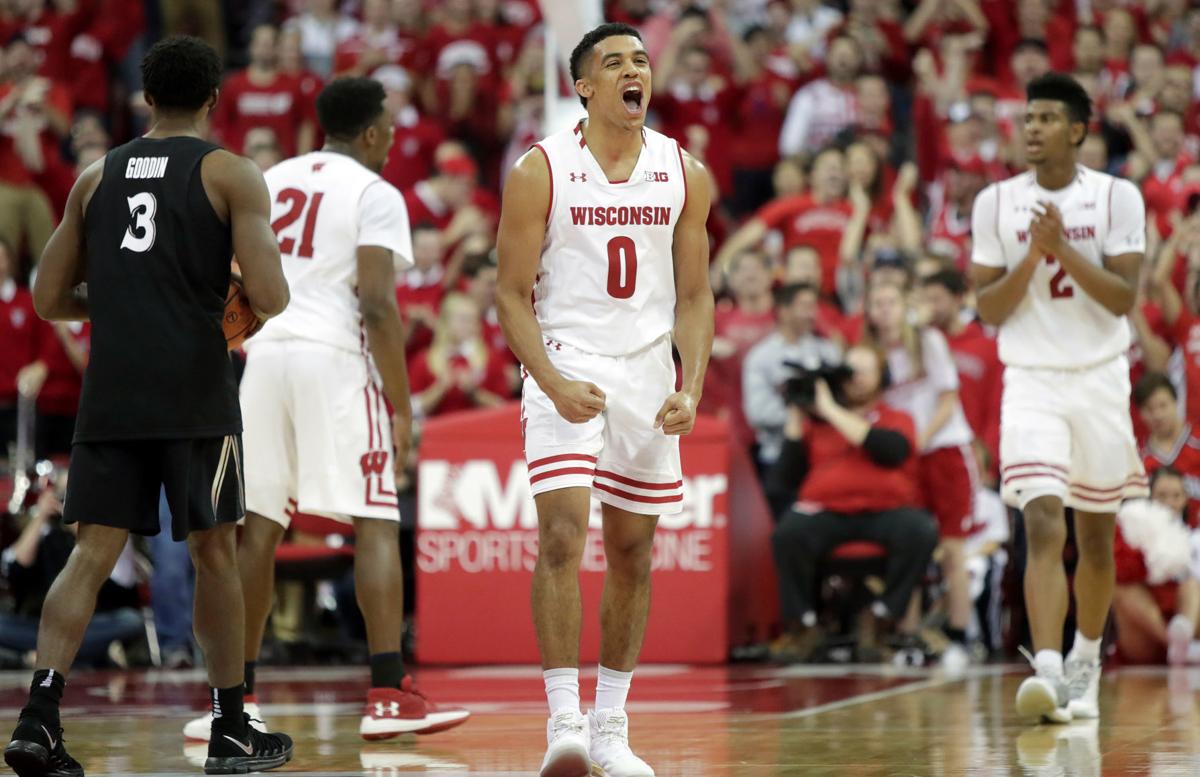 D’Mitrik Trice began last season as the starting point guard but played just 10 games because of a foot injury. 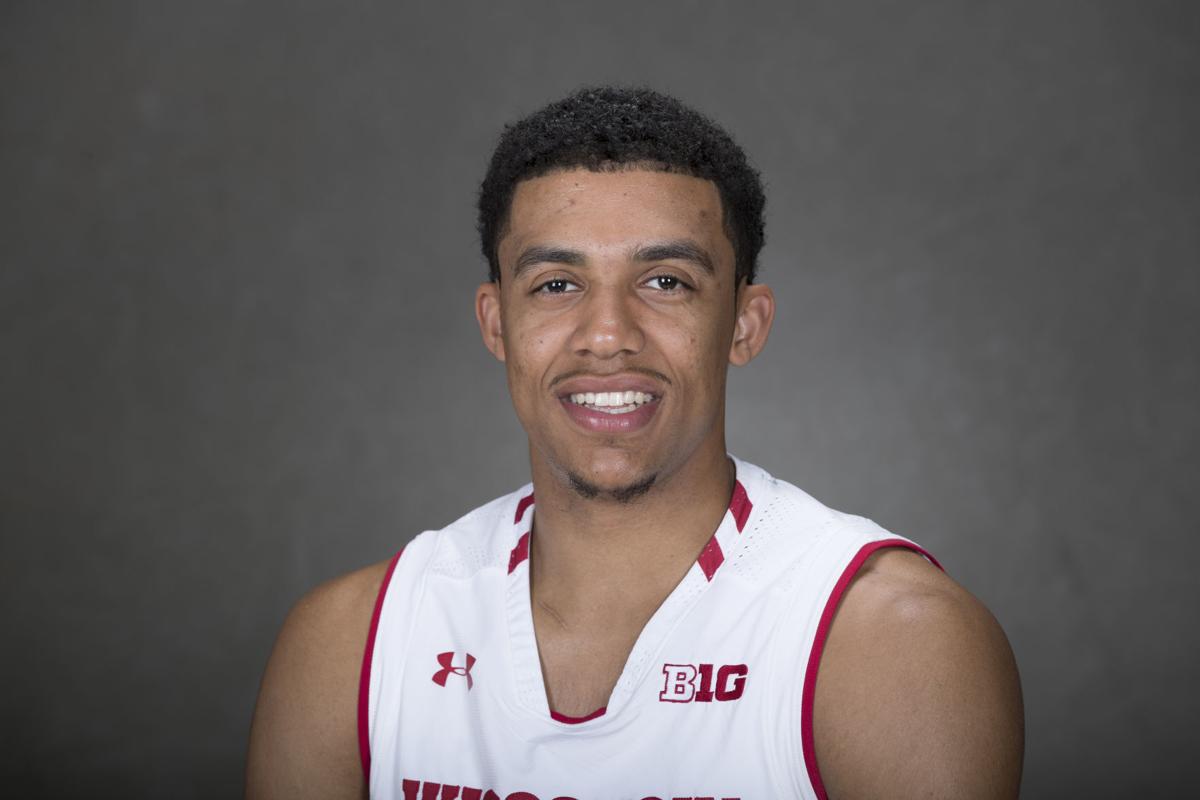 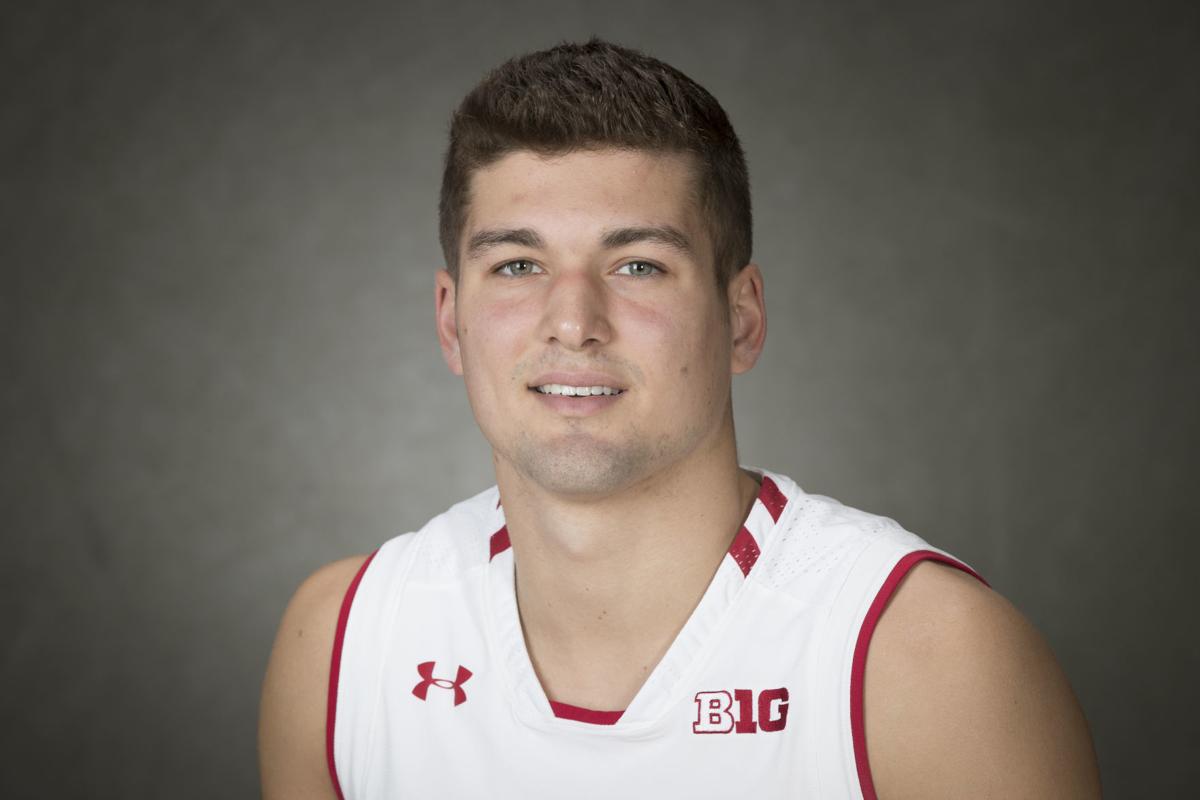 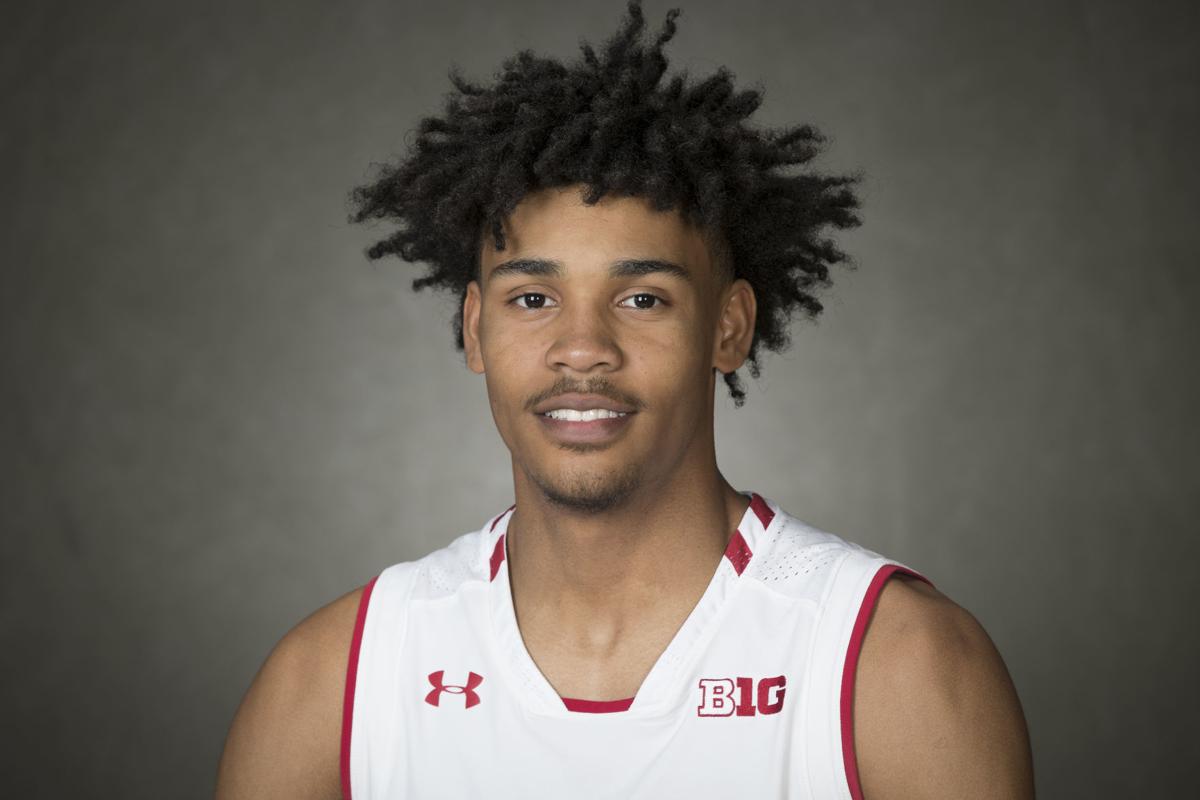