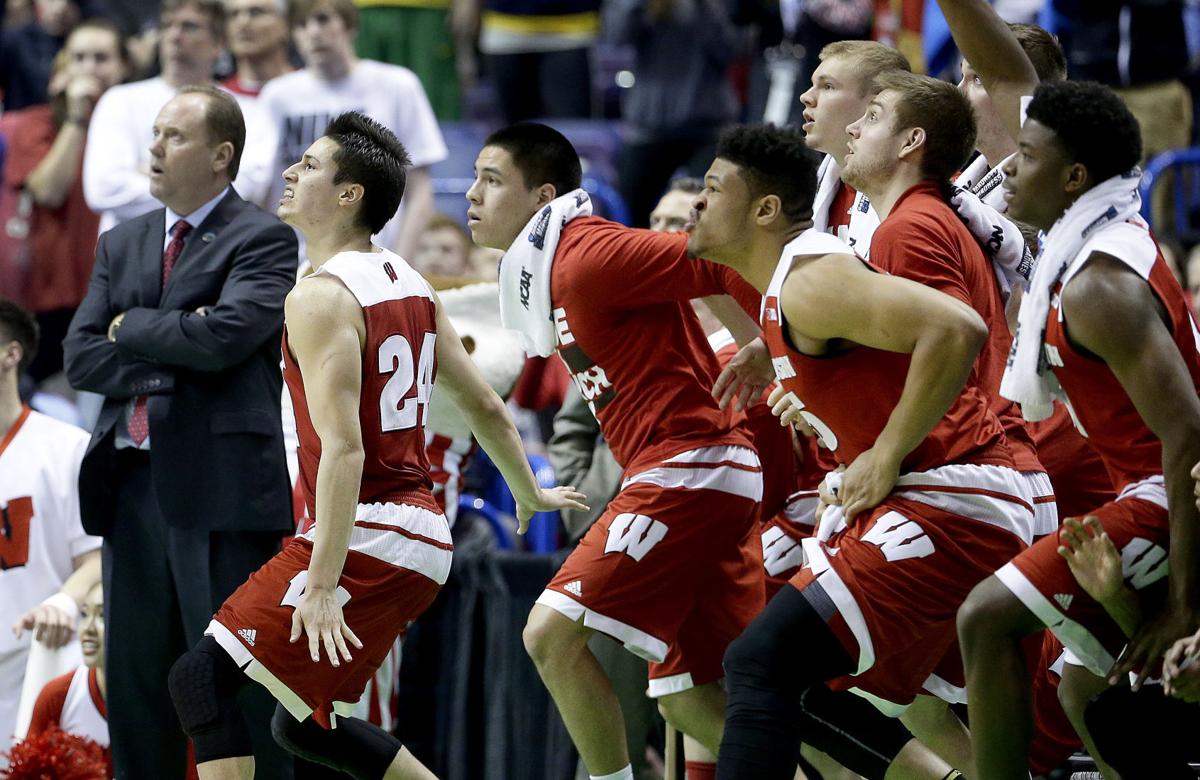 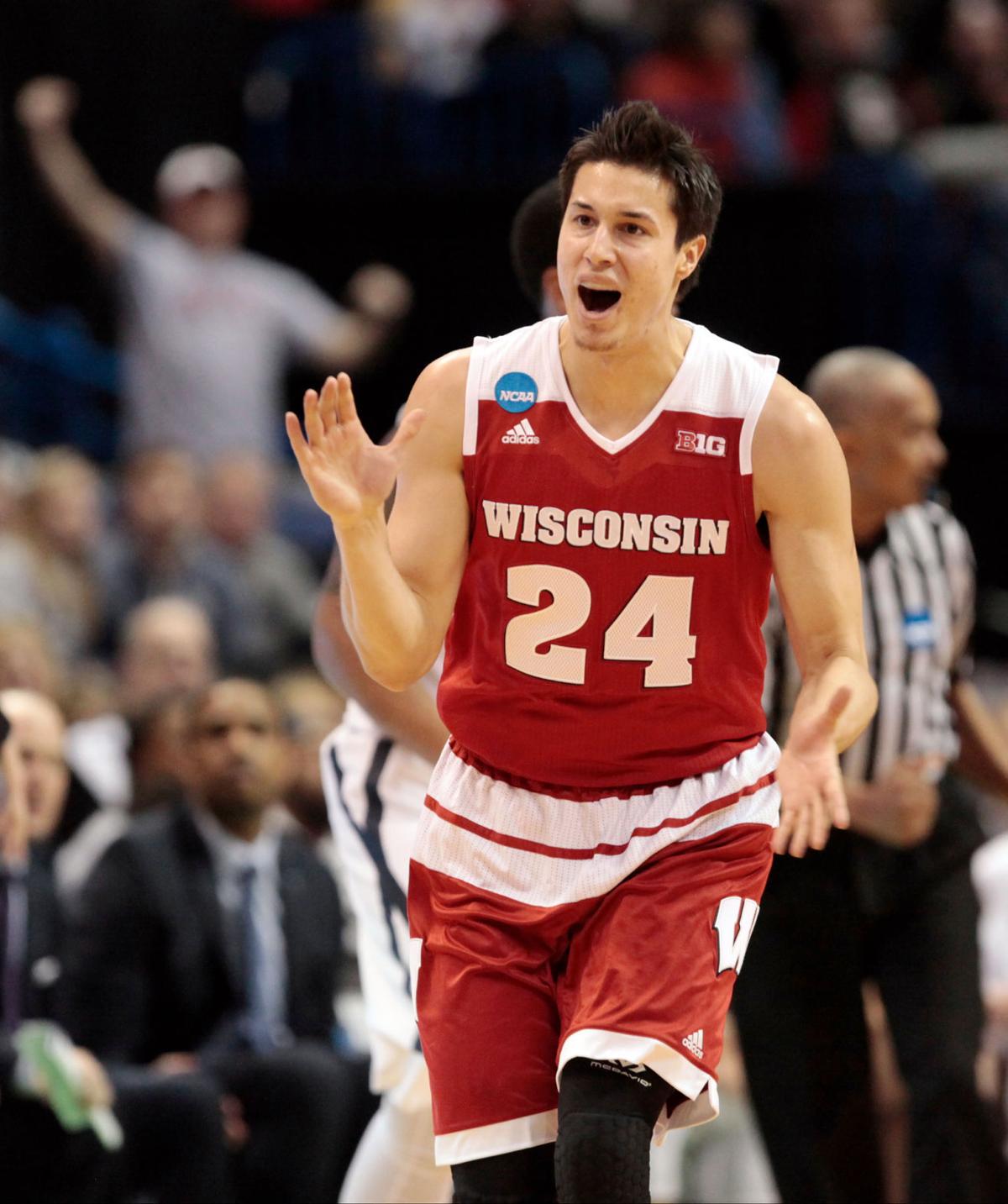 UW guard Bronson Koenig celebrates one of his two 3-point baskets during the first half against Xavier — shots that assistant coach Lamont Paris said help the junior snap out of his shooting slump.

Sam Dekker and Freddie Owens know a thing or two about making big shots for the University of Wisconsin men’s basketball team in the NCAA tournament.

On Sunday night, the two former Badgers were 1,800 miles apart watching UW take on Xavier in a second-round game in St. Louis. Owens was in what he calls his “man cave” with his wife in their home in Worcester, Massachusetts; Dekker was in his apartment in Houston, nervously following along with two of his close friends from Sheboygan.

When junior point guard Bronson Koenig made a step-back 3-pointer from the right corner as time expired to give the Badgers a 66-63 victory over Xavier, it set off eruptions from UW fans in the Scottrade Center and beyond.

Dekker, meanwhile, jumped off his couch and started screaming.

“I was running around the apartment,” he said.

The victory sent UW to the Sweet 16 for the fifth time in six seasons. The seventh-seeded Badgers (22-12) will play sixth-seeded Notre Dame (23-11) on Friday night in an East region semifinal at the Wells Fargo Center in Philadelphia.

The game-winner by Koenig — he had made a 3-pointer with 11.7 seconds remaining to tie the game — adds to a list of great shots for a program making its 18th consecutive appearance in the NCAA tournament, a streak tied for the fifth-longest in NCAA history.

Thirteen years ago, Owens made a 3-pointer from the left corner with 1.0 second remaining to send UW to the Sweet 16 of the 2003 NCAA tournament with a 61-59 victory over Tulsa in Spokane, Washington.

“Bronson’s shot was a lot more difficult than mine was,” Owens said. “He had run to the corner, kind of off the cut, get an inbound pass and turn and fire deep in the corner with no room, no space, with a guy draped all over him. Mine was a catch and shoot, something you’d practice at the local YMCA when you’re working on your game.”

During UW’s 85-78 victory over Arizona in a West regional final, Dekker scored 20 of his career-high 27 points in the second half. He finished with five 3-pointers after halftime, including one with 17.6 seconds that proved to be the dagger.

The following weekend, Dekker made a step-back 3-pointer with 1:41 left to give UW the lead for good in a 71-64 victory over previously unbeaten Kentucky in a national semifinal.

A year later, Dekker is a rookie with the NBA’s Houston Rockets and feels himself getting nervous while watching the Badgers play.

“At one point, my hands were actually shaking,” said Dekker, a Wisconsin native like Owens and Koenig. “I was like, ‘I need to be on the court.’ I guess that’s what it’s like as a fan.”

Dekker and two other key members from a 2014-15 team that won a program-record 36 games — Frank Kaminsky and Josh Gasser — typically text each other in a group message during games. Like most fans, there’s banter mixed in with actual basketball commentary.

“We’re invested in what they do,” Dekker said.

When UW was 9-9 in mid-January and its NCAA tournament streak appeared to be in jeopardy, Dekker would check in with one of his close friends, Badgers junior guard Zak Showalter, for updates.

“I’d be lying to you if I said I thought they’d be exactly where they’re at, with how they started,” Dekker said. “I talked to Showy all the time and he said, ‘We’ll be fine, we’ll be fine.’ So I believed him.”

Koenig kept telling himself he’d be fine as well despite struggling to make shots during the postseason.

He went 3 of 12 from the field during a loss to Nebraska in the Big Ten Conference tournament and missed seven of his eight shot attempts during an NCAA tournament first-round victory over Pittsburgh, when he went without a 3-pointer for the first time since last season.

Koenig missed his first four shots vs. Xavier before making 3-pointers on back-to-back possessions. He finished with six 3-pointers, including four in the second half.

“He’s been a highly competent kid so he’s going to believe he’s going to make the next one anyway,” Paris said. “But any shooter that’s struggling to any degree is going to feel better once they see something go in.”

When it came time for Koenig’s final shot, Dekker said he never had a doubt.

“I feel like I knew that was going to go in before he even shot it,” Dekker said. “He likes big shots. He showed again how clutch he can be and how much he can lead the team.”

Owens said he was happy to have company on the list of UW players to make game-winners during the NCAA tournament.

Now an assistant coach at Holy Cross, which qualified for the NCAA tournament out of the Patriot League, Owens has enjoyed watching the Badgers from afar this season.

“They’ve just sort of found their identity and hit their stride,” he said. “The rest is history.”

The Badgers have made the NCAA men's basketball tournament for 18 consecutive years. Since 1999, they had one shot at the national championship, three visits to the Final Four, four Elite Eight trips and nine Sweet 16 appearances in that time. How UW has fared in the NCAA basketball tournament:

Members of the public are out of luck — donors and season ticket holders bought all of Wisconsin's Sweet Sixteen ticket allotment.

He is shooting 16.7 percent from the field (7 of 42) in three postseason games

The billboard features Koenig in his University of Wisconsin-Madison uniform, holding a basketball next to the message, “It only takes one text to crash your dreams.”

The shot was the result of Koenig looking himself in the mirror in the offseason and deciding his game needed to expand. Many repetitions followed, numbering probably in the thousands.

Koenig hit a 3-pointer at the buzzer to beat Xavier 66-63, sending the Badgers to the Sweet 16 for the fifth time in six seasons.

Tom Oates: Badgers pull off the big-time upset that has eluded them

Video: Multiple angles of Bronson Koenig's 3-pointer that sent Wisconsin to the Sweet 16

University of Wisconsin junior guard Bronson Koenig hit a 3-pointer at the buzzer to beat Xavier, 66-63, in the second round of the NCAA tournament.

It didn't matter that former University of Wisconsin basketball standout Frank Kaminsky III has hit his own clutch shots in big games.

No. 7 Wisconsin defeated No. 2 seed Xavier, 66-63, in the second round of the NCAA tournament in St. Louis.

Since 1994, UW has beaten a higher seed eight times in the NCAA tournament. Overall, the Badgers are 8-10 when facing a higher-ranked team.

A game-by-game look at the 2015-16 Wisconsin men's basketball season.

A game-by-game recap of the 2016-17 Wisconsin men's basketball season schedule.

UW guard Bronson Koenig celebrates one of his two 3-point baskets during the first half against Xavier — shots that assistant coach Lamont Paris said help the junior snap out of his shooting slump.