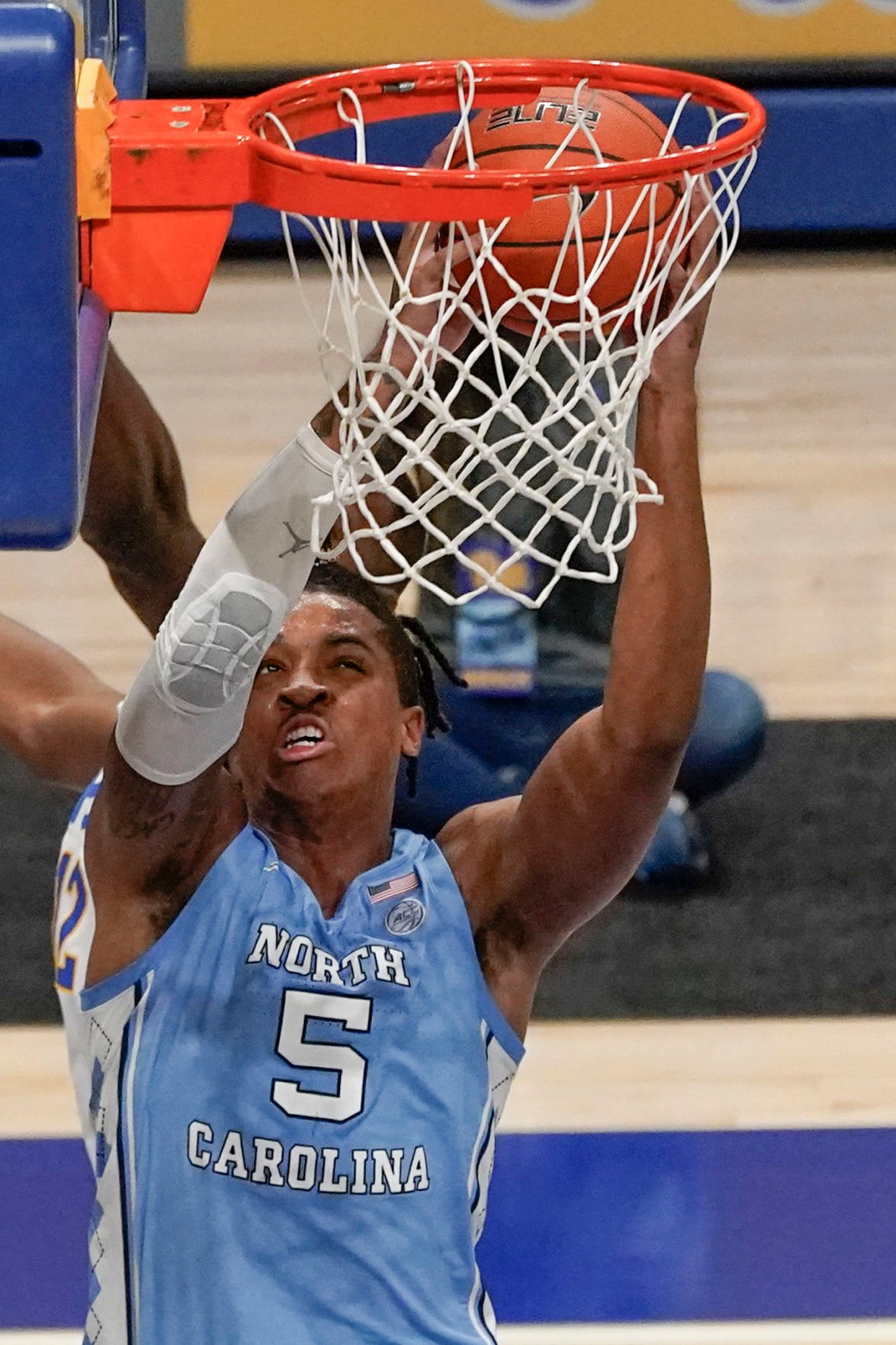 Sophomore forward Armando Bacot averages 12.3 points and 8.0 rebounds per game to lead North Carolina in both categories. More than 40% of his rebounds come on the offensive end. 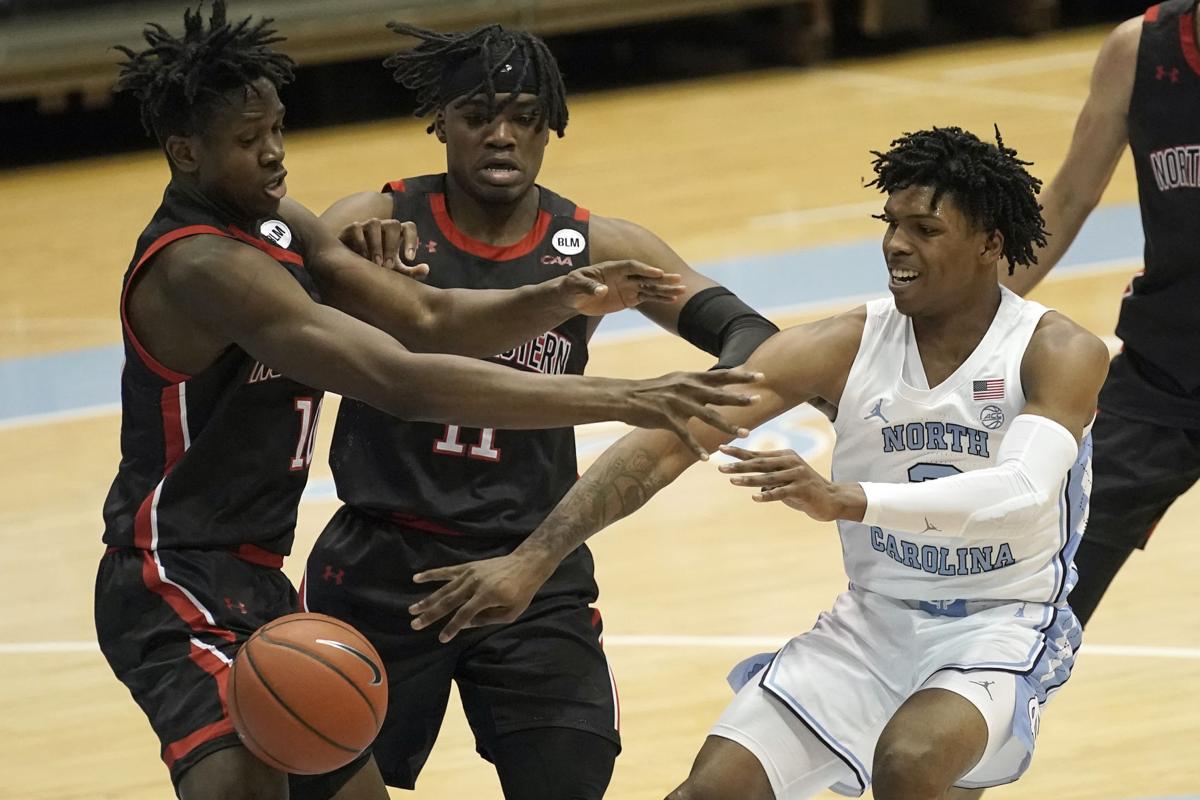 Based on expectations when the season began, a matchup between the University of Wisconsin and North Carolina men’s basketball teams looked like something that could happen during the second weekend of the 2021 NCAA tournament.

Not quite. A pair of underachieving teams will meet as mid-level seeds in the first round, with the Badgers (17-12) and Tar Heels (18-10) scheduled to play Friday at 6:10 p.m. at Mackey Arena in West Lafayette, Indiana.

The winner likely will meet Baylor, the No. 2 overall seed in the field, on Sunday.

UW, which started the season ranked No. 7 in the nation, was handed the No. 9 seed in the South region and will enter the tournament with six losses in its past eight games.

“We thought we’d get a little bit of a (better) seed, but it is what it is,” UW senior point guard D’Mitrik Trice said. “You can’t really change that. You can’t affect that in any way. You’ve just got to go out there and compete against whoever you’re matched up with.”

North Carolina, the No. 8 seed, started the season ranked No. 16 but needed some key wins over the final month of the season to get off the bubble.

“We are ecstatic to be playing in the NCAA tournament,” North Carolina coach Roy Williams said in a statement. “There were a couple of times during the season when we were wondering whether or not we would make the field, but our team kept getting a little bit better and better.”

UW coach Greg Gard called it a “terrific matchup,” though this one comes on a lesser stage than the first two NCAA tournament meetings between these two programs. The Tar Heels beat the Badgers in the Elite Eight in 2005 en route to their first of three national titles under Williams, and UW returned the favor a decade later by eliminating North Carolina in the Sweet 16 on its way to a national runner-up finish.

The Badgers went 4-10 against the NCAA tournament field, while North Carolina was an equally unimpressive 3-8.

The teams fared similarly against three common opponents: Both routed Louisville and lost to Marquette. North Carolina lost to Iowa in an ACC/Big Ten Challenge game, while the Hawkeyes beat the Badgers three times.

UW senior guard Brad Davison had yet to dig into North Carolina film but knew what to expect when he did: an athletic team that hasn’t changed its identify under Williams, who has gone 485-162 in 18 seasons in Chapel Hill.

“Obviously, it’s one of the best programs in college basketball over the last … forever,” Davison said. “Obviously, very well coached with coach Roy Williams. A lot of talent, really athletic, love to run up and down. Good defensively. I know they’re usually really good at offensive rebounding and going and getting their misses, love to play fast. That’s kind of the usual UNC protocol, how they operate.”

The one worrisome stat, as far as UW is concerned, is that North Carolina leads the nation in offensive rebounding percentage, collecting 41.3% of its misses.

UW has had trouble keeping long, athletic teams off the offensive glass, with the latest example coming during a 62-57 loss to Iowa in a Big Ten tournament semifinal on Friday night.

The Tar Heels have four players over 6-foot-10 in their rotation and two of them — freshman Day’Ron Sharpe and sophomore Armando Bacat — have combined for 187 offensive rebounds this season.

Bacot leads North Carolina with 12.2 points and 8.0 rebounds per game. Caleb Love, who leads a heralded freshman class that has helped the Tar Heels bounce back from a 14-19 season, adds 10.5 points and a team-high 3.6 assists per game.

North Carolina does have some significant flaws: It shoots 31.7% from 3-point range and 66.7% from the free throw line, and it turns the ball over on 20.5% of its possessions, or roughly 14.8 per game.

UW, meanwhile, hasn’t been able to find the magic it had during an eight-game winning streak to end the 2019-20 regular season. The Badgers were eager to roll into the postseason after winning a share of the Big Ten title, but the postseason was wiped out by the COVID-19 pandemic.

Maybe that’s why the Badgers aren’t complaining about what seed they were given or what appears to be a difficult path on the opening weekend of NCAA tournament play. They’re eager to soak up an experience they didn’t get a year ago.

Freezing up: Badgers offense goes ice-cold down the stretch as Hawkeyes finish strong

The Badgers are 0-8 against teams who earned either No. 1 or 2 seeds in the tournament — three losses to Iowa, two each to Michigan and Illinois and one to Ohio State — but could get a chance to end that drought against Baylor in the second round.

First things first: UW has to beat North Carolina, which opened up as a 1½-point favorite over the Badgers.

“Where we’re at now, our backs are against the wall and we have nowhere to go,” UW senior center Micah Potter said after the loss to Iowa in Indianapolis. “If you lose, you’re done now. If that’s not motivation, I don’t know what is.”

What's life like in the bubble for the Badgers men's basketball team?

The Badgers arrived in Indiana last Wednesday for the Big Ten tournament and will remain in the same hotel in downtown Indianapolis until they’re eliminated from the NCAA tournament.

UW never replaced Erik Helland, who was forced to resign more than 13 months ago after using a racial epithet in front of men's basketball players.

Does the Mackey Arena curse count if the opponent isn't Purdue? Badgers are about to find out

Big vs. bigger: A Marquette assistant coach breaks down the matchup between the Badgers and North Carolina men's basketball teams

“It’s going to be a great matchup,” Marquette assistant coach Jake Presutti said, “and I’m looking forward to it.”

Nostalgia for 1980s and 90s pop culture is in full swing these days and the UW men's basketball team couldn't resist hopping on the bandwagon as they prepare for the return of the NCAA tournament.

UW coach Greg Gard is 2-0 in one-day preps in the NCAA tournament, with upset wins over Xavier and Villanova.

Predicting a starting group for 2021-22? It’s nearly impossible and foolish to even attempt as UW begins an offseason of transition.

“I knew it was going to be darn near impossible to recreate what we had going last March,” Badgers coach Greg Gard said. “It became harder than I even thought."

Of course, plenty of teams have had trouble defending Garza, the two-time Big Ten player of the year. But that was no consolation to the Badgers when they fell to Iowa 62-57 in the quarterfinals of the Big Ten tournament.

Photos: Wisconsin Badgers struggle to score while Iowa Hawkeyes come through in the clutch

After a disappointing regular season, both the University of Wisconsin men’s basketball team and North Carolina’s are looking to turn the page…

With the NCAA men's basketball tournament returning this week after a one-year hiatus, March Madness promises to be as entertaining as ever. W…

Get the latest postgame updates after the ninth-seeded Badgers routed the eighth-seeded Tar Heels 85-62 in the NCAA tournament at Mackey Arena in West Lafayette, Indiana.

Travis Trice Sr. played two seasons at Butler and scored 24 points in his debut at the historic venue.

The UCLA Bruins are listed as the biggest underdog at the Final Four in 25 years — 14 points — as they head into Saturday night’s game against Gonzaga.

Sophomore forward Armando Bacot averages 12.3 points and 8.0 rebounds per game to lead North Carolina in both categories. More than 40% of his rebounds come on the offensive end.