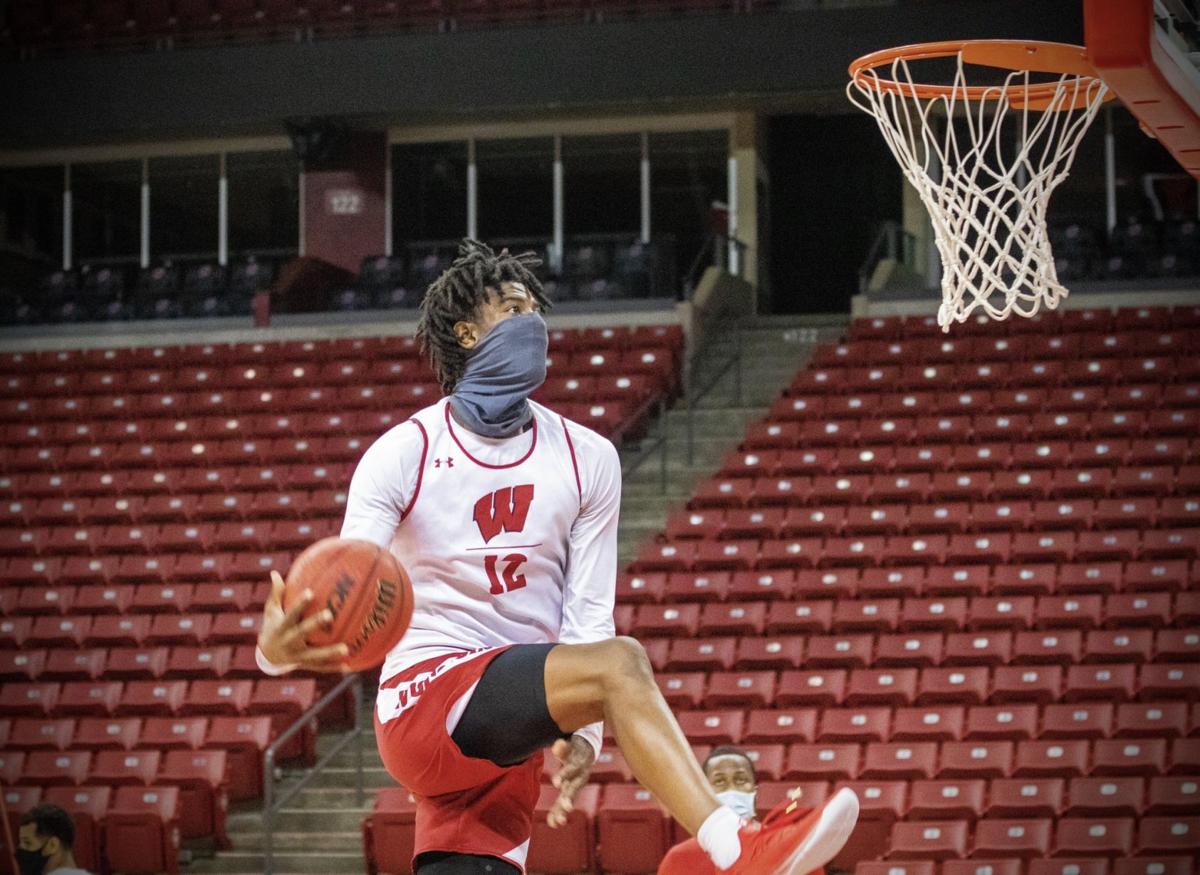 Aleem Ford, who started all 31 games as a junior last season, drives to the basket during a recent practice at the Kohl Center. 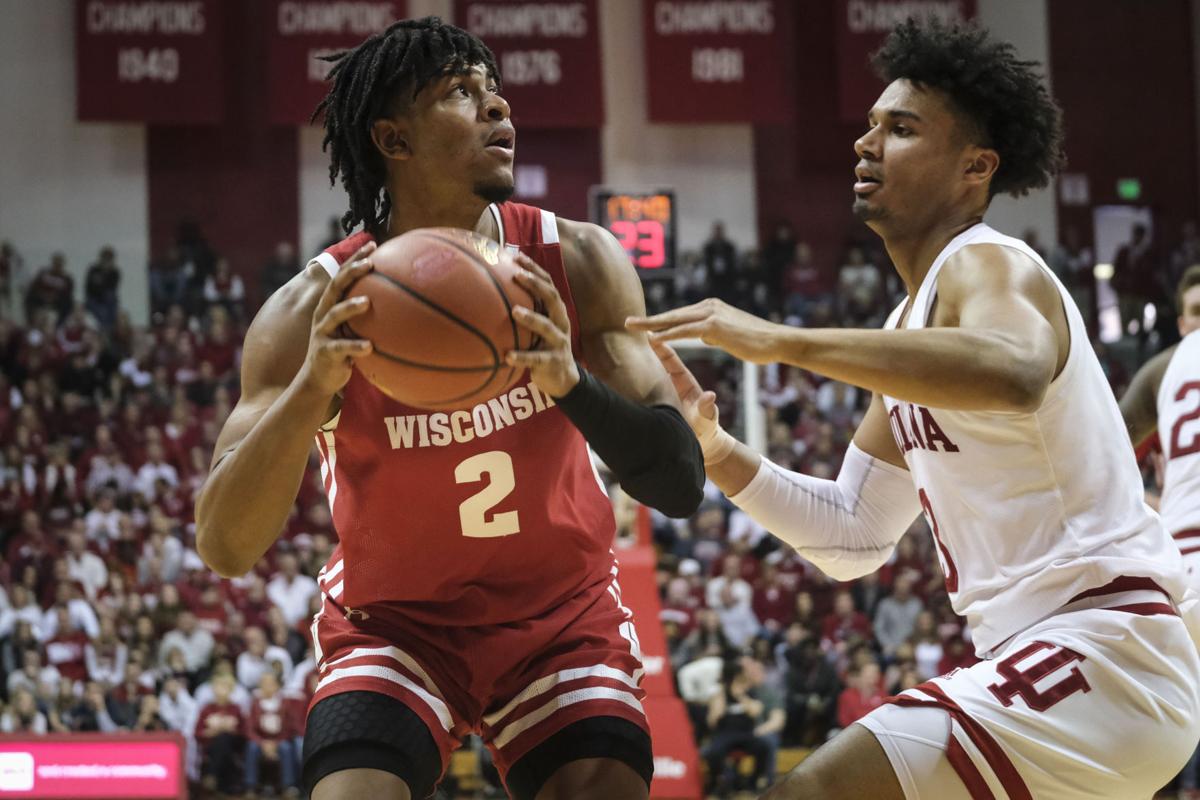 Aleem Ford scored 12 points in what turned out to be UW's final game last season, a 60-56 victory over Indiana on March 7 in Bloomington. The team's Big Ten tournament opener scheduled for six days later was canceled due to the coronavirus.

Aleem Ford was just feeling like he’d hit his stride when the forward on the University of Wisconsin men’s basketball team ran into the roadblock that was the COVID-19 pandemic, which abruptly ended the 2019-20 season last March.

“Not even just individually,” Ford said. “As a whole team, we were all clicking. I definitely wish it didn’t come to a halt like that. But that’s really out of our control, so I’m just going to try to personally use that momentum we had at the end of the season and I know our team will, too.”

Summer workouts continue for the Badgers, who are patiently waiting to find out how this coming season will look. UW returns almost its entire rotation from a team that won its final eight games to clinch a share of the Big Ten regular-season title.

That group includes Ford, who averaged 8.6 points and 4.4 rebounds while starting all 31 games as a junior. The fifth-year senior was the first veteran to return to campus, returning to Madison from his home in Georgia about two months ago in part because he wanted more access to workout facilities.

Early returns suggest Ford is ready to pick up where left off in March.

It’s not hard to find the point where Ford turned that corner. It came when the Badgers needed him the most, after sophomore wing Kobe King’s shocking departure from the program left UW short-handed as it was reaching the midway point of the Big Ten schedule.

So why did the switch flip for Ford? Oliver believes there were several factors at play, including developing better habits off the court, whether it was in the classroom or how he took care of his body. Oliver also thinks Ford developed a thicker skin so he was better equipped to deal with criticism.

“And when he started seeing results,” Oliver said, “I think it just snowballed.”

As cliché as he knows it sounds, Ford said a lot of it came down to confidence. Not doubting himself led to Ford playing with more aggression, which showed in the way he hunted his shot down the stretch and his willingness to mix it up in the paint.

“In my career, we’ve had a lot of ups and downs and I’ve kind of experienced everything,” Ford said. “As we were hitting those bumps in the road, I kind of knew that there was an opportunity and I wanted to make the most of it. So it was just going out there and giving my all.

“Whether I was making shots or not making shots, I just wanted to make sure that I was giving my team 100 percent. We kind of started clicking then as a whole group and just started playing really well together. Throughout that season, we were going up and down. The only thing I felt like we could do is give it our all and let the rest take care of itself.”

Last year at this time, UW assistant coach Alando Tucker was in the early stages of trying to get Ford to take the next step. After watching the part-time starter flash potential but struggle with consistency, Tucker took Ford on as a special project of sorts.

The results of that endeavor were on full display during UW’s remarkable run to its first conference title in five years. Now it’s fair to wonder whether there’s another level Ford can reach?

“Oh, yeah, 100 percent,” Ford said. “I’ve always looked at myself as someone who when I play on the floor, I want to be able to do it all. I feel like the roof is limitless, so I’m just trying to keep working on everything and improve on aspects of my game and create more aspects of my game.

Badgers men's basketball coach Greg Gard has stressed to his seven seniors the important role they’ll play while serving as a bridge between the present and the future of the program.

Glendale Nicolet's James Graham, a 6-8 forward who had more than 20 scholarship offers from high-major programs, averaged 20.3 points and 6.6 rebounds as a junior.

Badgers basketball forward Micah Potter said he knew within 72 hours of meeting Loyola University volleyball player Elle Van Grinsven that she was the one.

He briefly considered a political science major while in school and has mulled running for state office in the past.

“Who you work for is everything,” former Badgers men's basketball player Freddie Owens said while recalling former coach Bo Ryan's words of wisdom.

Ex-Badgers star Frank Kaminsky averaged 9.7 points and 4.5 rebounds in 37 games during his first season in Phoenix, a campaign that was marred by the first major injury of his career.

Aleem Ford, who started all 31 games as a junior last season, drives to the basket during a recent practice at the Kohl Center.

Aleem Ford scored 12 points in what turned out to be UW's final game last season, a 60-56 victory over Indiana on March 7 in Bloomington. The team's Big Ten tournament opener scheduled for six days later was canceled due to the coronavirus. 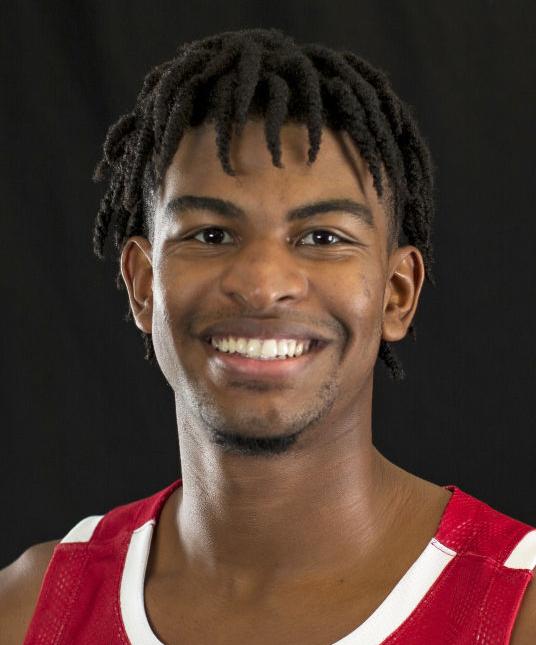