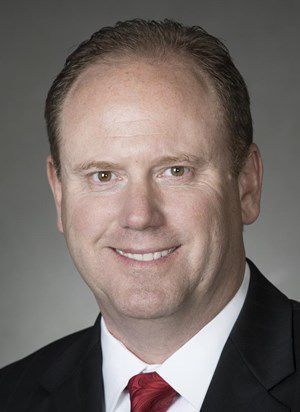 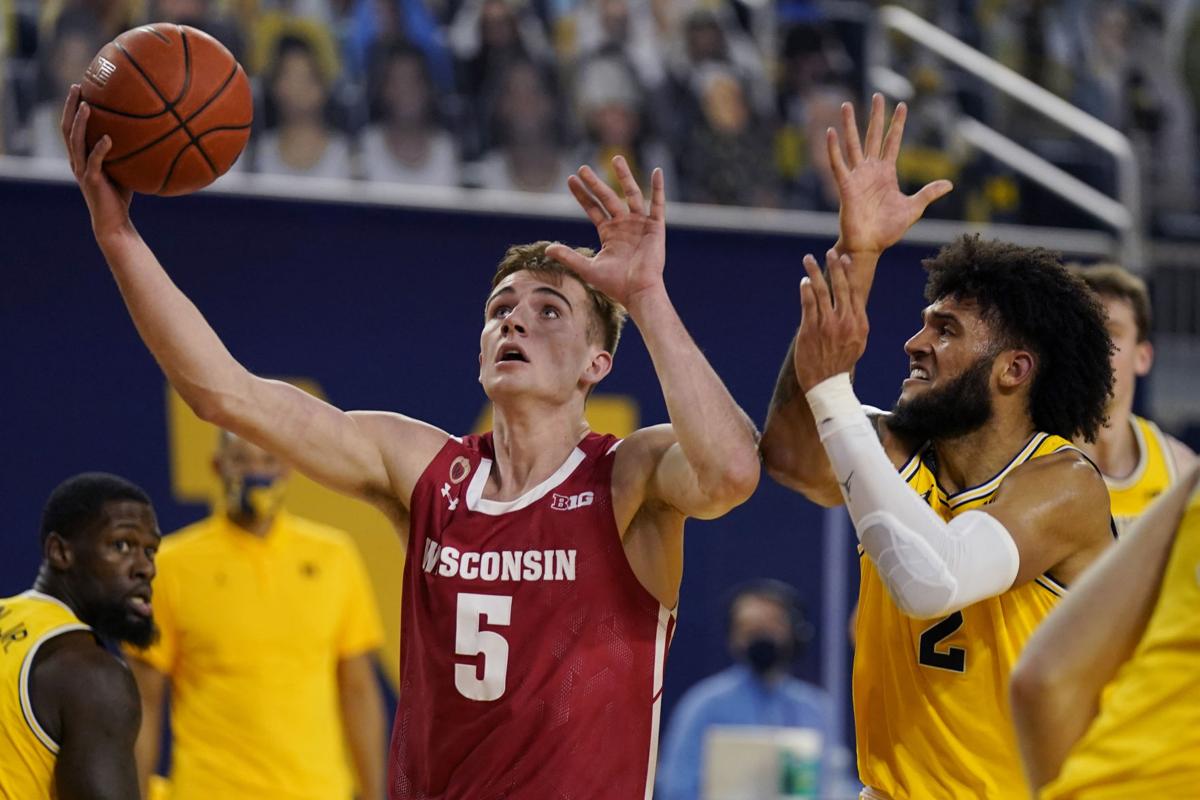 It's clear from the early practices that junior forward Tyler Wahl has assumed a leadership role for the Badgers. 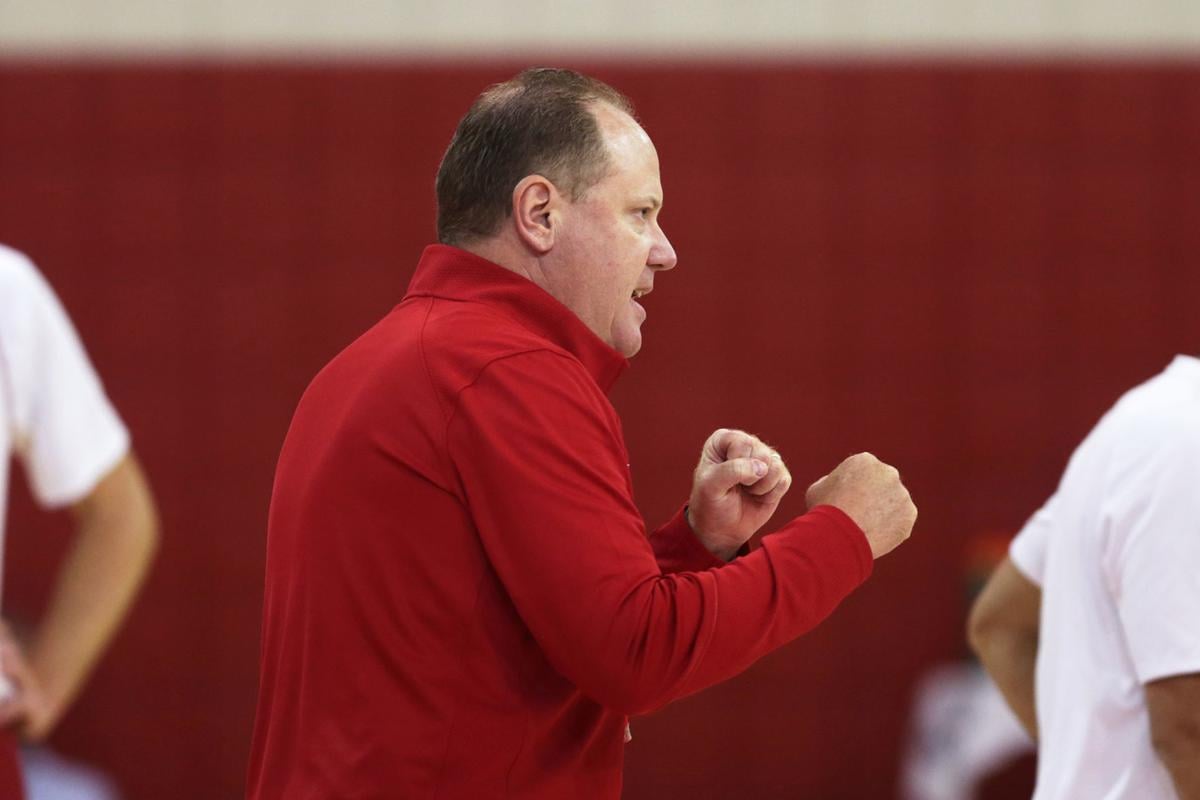 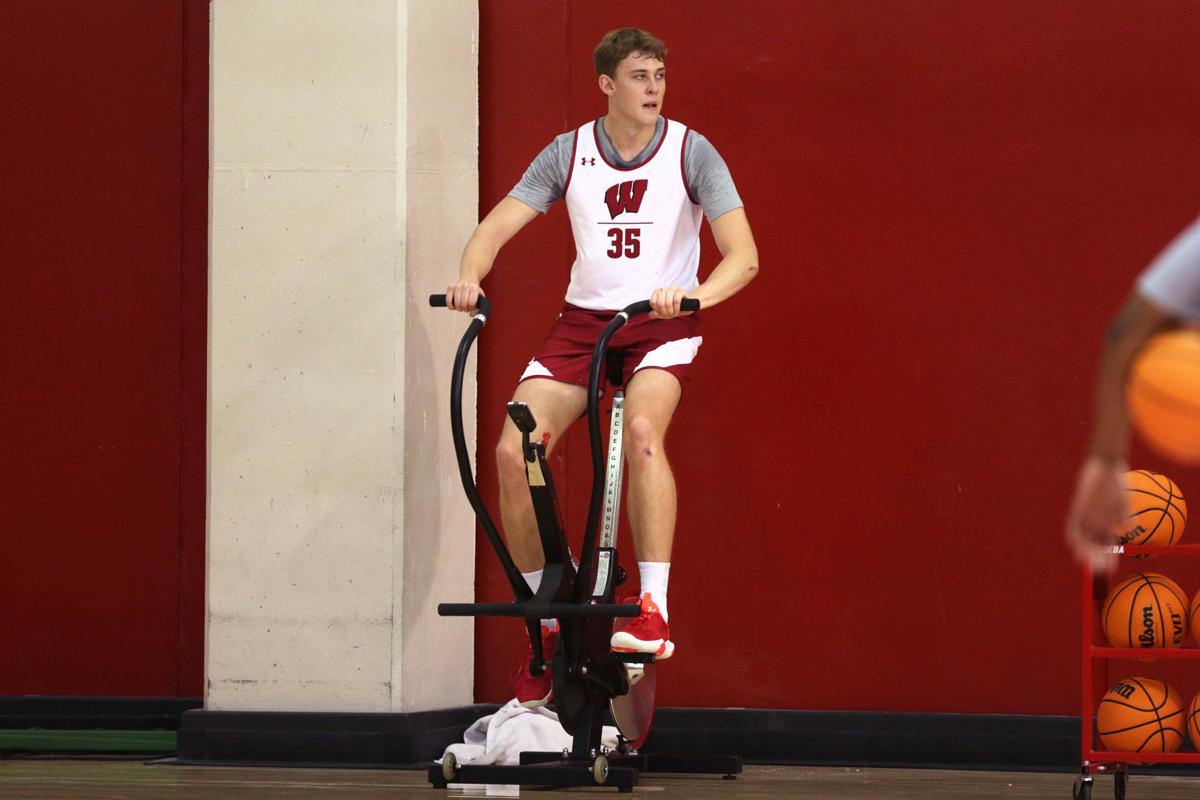 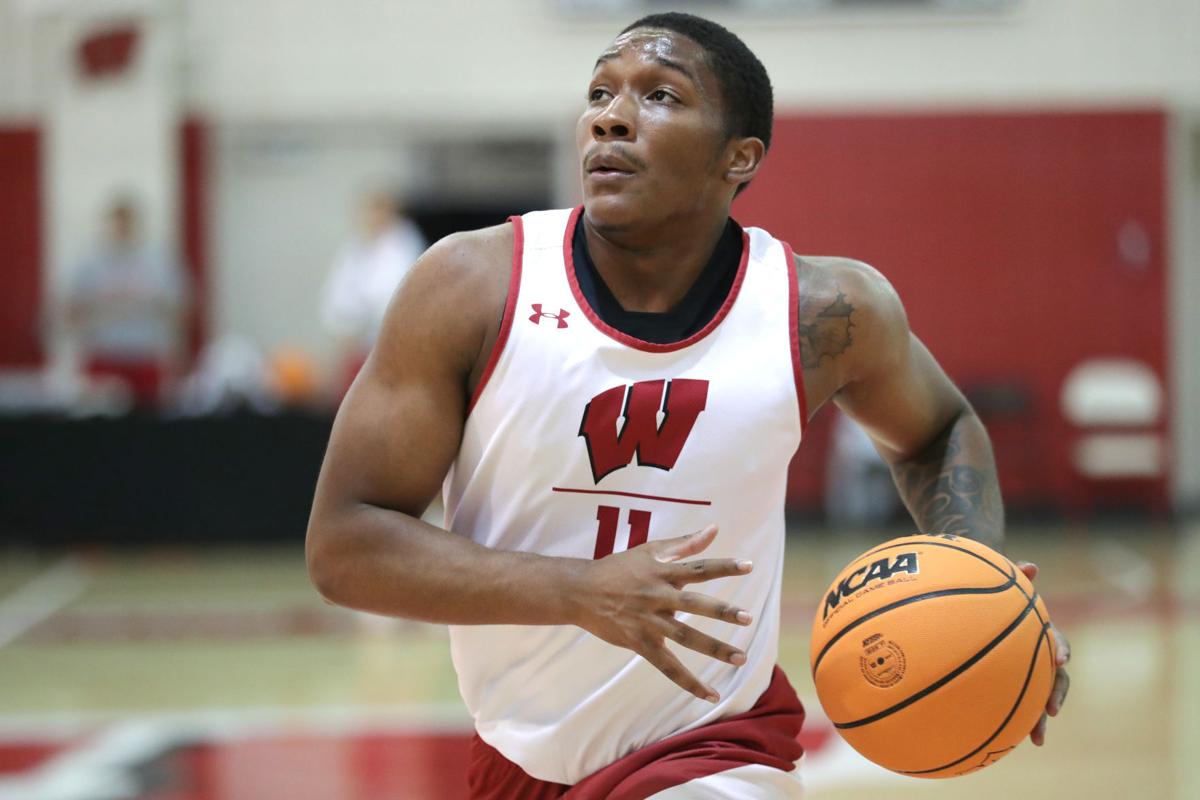 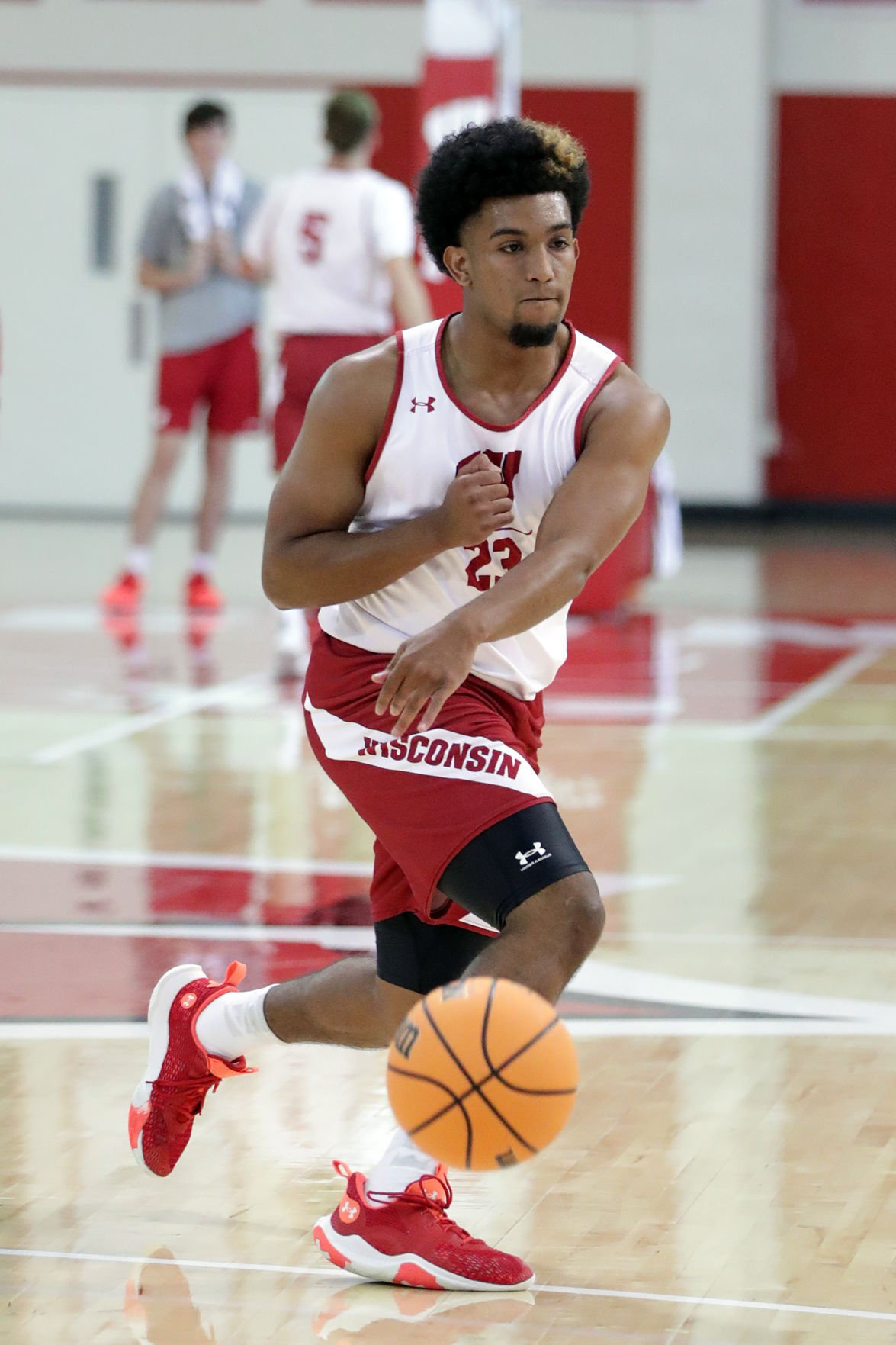 UW hosted its local media day earlier in the day, and all 17 players, three assistant coaches and coach Greg Gard were available for questions. Media members were invited to stick around and watch the team’s ninth preseason practice.

Gard opened his news conference by touching on all the unknowns about his team, which includes eight new players. One thing is known for Gard — he’s excited to go to practice every day.

“It’s a group that attacks every day and has gotten better, I think, through the eight days,” Gard said. “We obviously know it’s a work in progress. And every day is a new day. They’re learning, constantly, something new. But it’s been a fun group to work with.”

Here are three observations from practice:

It’s evident that it’s a young team whether looking at the roster or watching practice. There are only two returning starters in senior guard Brad Davison and Wahl to go along with five returning sophomores and one redshirt junior. The other eight are new faces, and five of those are freshmen.

Gard said a lot of practice time has been spent learning UW terminology and drills. He stopped a drill in the middle in order to explain how to do it properly on three occasions Monday. He noticed multiple players performing the drill wrong — typically freshmen — and would reteach it before restarting.

Members of the freshman class and even some of the sophomores had issues with footwork as well. The team conducted a drill in which two players were going against each other up and down the court. At the midway point, the defending player was supposed to set his feet to draw a charge.

Davison, Wahl and Davis had no difficulty, but freshman forwards Matthew Mors and Markus Ilver had problems getting their feet set before the opponent charged at them.

Hepburn also had some miscues with his footing during a fast paced three-on-three drill that led to him losing the ball.

Gard hasn’t set a starting five. Practice is still in its early stages, but pairings in practice could indicate good things for Hepburn. In drills that had partners, Hepburn often was paired with team leaders. Davison and Hepburn were partners during warmups, and in drills when the team was practicing plays Hepburn was often paired with Wahl or Davis.

A three-on-three portion that featured Hepburn, Davis and Wahl as a team offered a glimpse at what they can accomplish together.

Hepburn was effective at getting himself into position and finding Wahl or Davis to score. Davis also found Hepburn underneath the basket, where he spun away from senior center Chris Vogt to get the basket. Defensively, Hepburn was loud and able to predict where his opponent was going.

Yes, it was only a three-on-three pressure situation, but Hepburn was impressive on both sides of the ball.

It’s already been established that Wahl is going to be a leader this season, which was only made clearer by his presence at practice. Whether shooting, defending or helping one of his younger teammates, Wahl had a sense of confidence around him.

He was loud defensively and got in his teammates’ faces. There were a number of times Wahl either pulled aside someone to instruct them or a teammate asked him a question.

He pulled aside Mors right before the whistle blew during the three-on-three drill. Mors was playing offense to Wahl’s defense, but Wahl showed Mors the proper body positioning on a play.

“He’s just a calming presence,” Mors said. “He’s been so great in helping me get adjusted to how we play here.”

Here’s what Greg Gard, Brad Davison and Tyler Wahl had to say about Wisconsin’s 8 newcomers

From the history of the program to the basics of college basketball, the Badgers new players are getting a crash course on UW men’s basketball.

Jonathan Davis and Tyler Wahl were joined by Brad Davison as the leaders of the men's basketball team at media days, but Davison made it clear it’s their show and he’s just here to help.

The University of Wisconsin women's basketball coach speaks to the media Friday during the Big Ten media days in Indianapolis.

The University of Wisconsin men's basketball coach speaks to the media Friday during the Big Ten media days in Indianapolis.

The University of Wisconsin women's basketball coach speaks to the media Friday from the Big Ten media days in Indianapolis.

From Big Ten women’s basketball’s success to the importance of the transfer portal, here are five things that stood out at media day.

The Wolverines center speaks to the media Thursday during Big Ten basketball media days in Indianapolis.

What the Big Ten announced it will do to give women's sports, athletes ‘the respect that they've earned’

The Badgers representatives will speak Friday at Big Ten media days, which will be the first time players will give their thoughts on the upcoming season.

Here’s what Greg Gard, Brad Davison and Tyler Wahl had to say about Wisconsin’s 8 newcomers

From the history of the program to the basics of college basketball, the Badgers new players are getting a crash course on UW men’s basketball.

Transfers Chris Vogt and Jacobi Neath as well as freshman Markus Ilver met the UW coaching staff and saw the Badgers’ facilities in person for the first time when they moved to campus in June.

The Badgers only plan to sign one men’s basketball recruit. Here’s why that makes sense for them

The Badgers only expect to have one men's basketball scholarship spot available after this season, so the coaching staff could be picky about who it targeted.

Sophomore guard Jonathan Davis said some holes in the team’s game were exposed, but the scrimmage also was an opportunity for players to get experience in front of a crowd.

It's clear from the early practices that junior forward Tyler Wahl has assumed a leadership role for the Badgers.