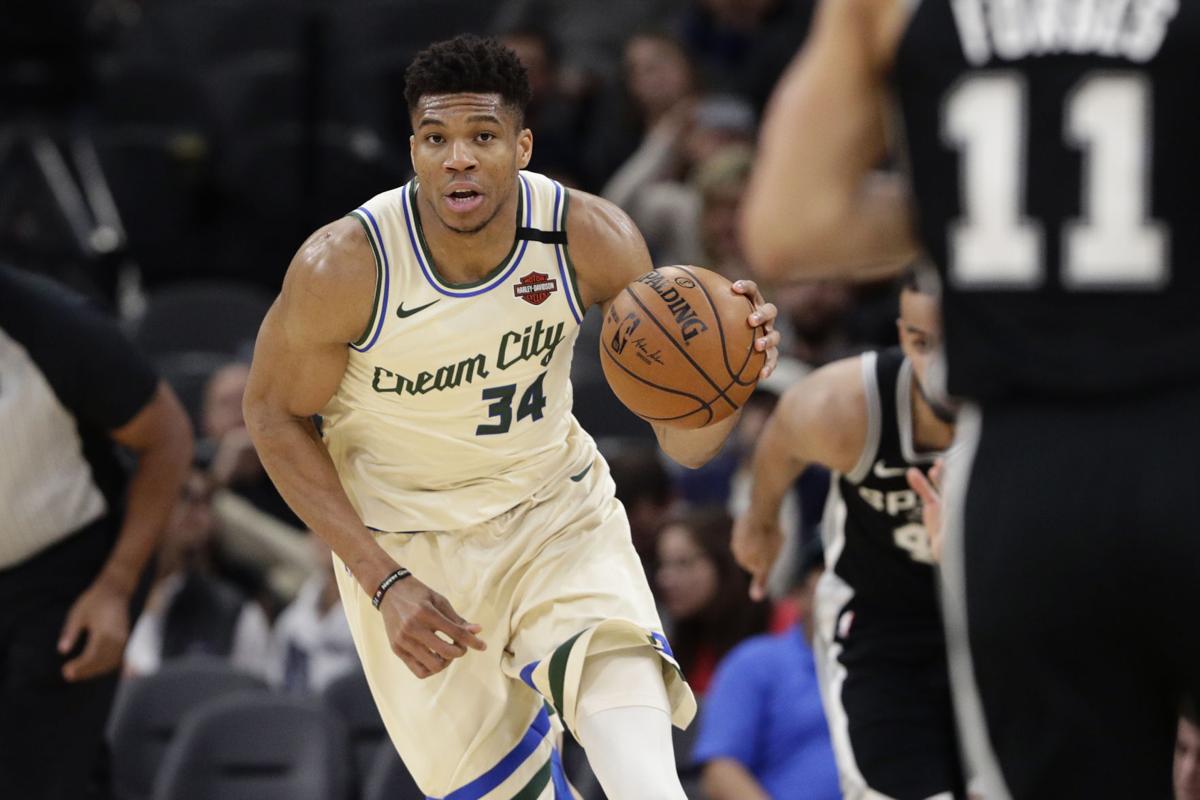 Bucks forward Giannis Antetokounmpo predicts it will take some time to return to his usual form heading into Friday's game. "I'll be better when the playoffs start than I will be tomorrow," he said. 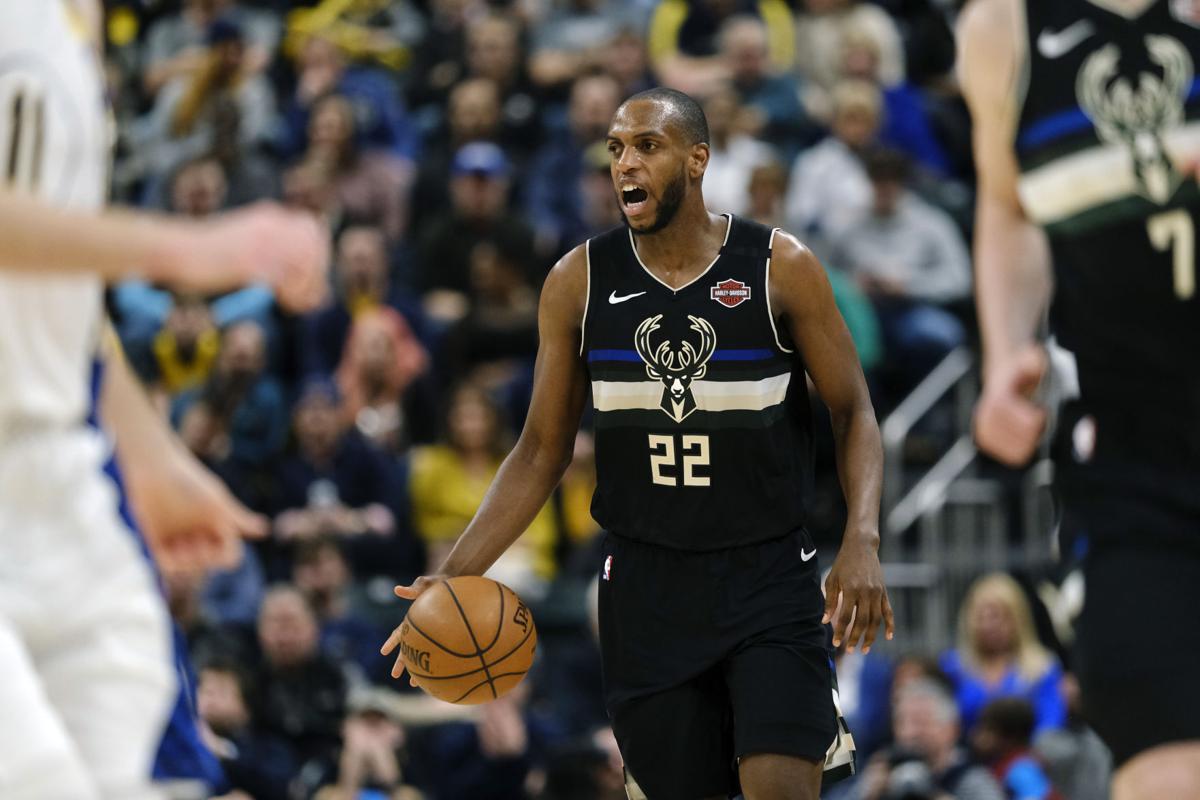 Says Bucks TV analyst Marques Johnson, a five-time NBA All-Star, of small forward Khris Middleton: “He’s got this definition I’ve never seen before, his body fat is probably way down — he looks really good, really in great shape. He’s really put in the work during this time off to come back and make himself better physically.”

The Milwaukee Bucks have very little to gain from their eight seeding round games when the NBA resumes its 2020 schedule this week.

With a league-best 53-12 record when the league shut down in March, the Bucks sit 6½ games ahead of the defending champion Toronto Raptors in the Eastern Conference. Barring the most colossal of collapses, the Bucks are all but assured the top spot in the East for the playoffs.

All that’s really left at this point is the top overall seed, for which they currently lead the Los Angeles Lakers by three games, but considering the Bucks won’t enjoy the benefit of home-court advantage, is it even worth risking possible injury to a star player ahead of the postseason?

“What’s most important to us is we want to be healthy and we want to be playing well. You have to beat everybody to get to where you want to go, so the best record in the NBA has never been anything we talk about or think about.

“For us, it’s about what we’re doing each day to get better. Are we taking care of our bodies, doing everything we can to stay healthy — physically and mentally. All the other things, like stats and records, usually fall in line behind that.”

If anything, the eight-game pre-playoff slate will give the Bucks a chance to work themselves back into form, both physically and from a skill perspective, for the postseason.

Forward Giannis Antetokounmpo, who returns to the floor as a favorite for a second consecutive MVP award, said he’s somewhere between 70 to 75% of where he’s usually at to start a season — which he admits isn’t always crisp out of the gate.

“I’m usually a little behind when the season starts,” Antetokounmpo said. “I’m a little all over the place because of the excitement. I foul a lot, my passes aren’t as sharp but as we get going, I play better and better.

“I’ll be better when the playoffs start than I will be tomorrow.”

After blowing a 2-0 lead to the Raptors in the conference finals a year ago, the Bucks have been focused on the ultimate prize — a title — since training camp opened last fall. They were well on their way to that goal during the regular season, looking downright dominant while leading the league not just in winning percentage, but also scoring (118.6 points per game) and defensive rating (101.6), while trailing only the Lakers in field-goal percentage (47.7%).

The four-month layoff no doubt led to some rust and allowed challengers to heal up for one last chance to knock the Bucks off their perch. As the team returned to the court, Budenholzer has been impressed with his players’ approach, demeanor and most importantly, their focus on the task at hand.

“They want to be sharp, they want to get better,” Budenholzer said. “Starting tomorrow night against Boston will be a good challenge. They do things that make it difficult so we’ll learn and get better. I think lots of guys will get opportunities. We’ll just balance where we are as far as the standings and our record and the bigger picture, the bigger goal, with everything we do as we work through the eight seeding games.”

Guards Eric Bledsoe and Pat Connaughton have cleared the NBA’s COVID-19 protocol and are with the team but will not play Friday night against Boston, Budenholzer said.

Both were late arrivals to the bubble after testing positive for the coronavirus prior to the Bucks’ departure earlier this month and will need some time to regain their conditioning and rhythm before playing in a game.

“They had a good practice today,” Budenholzer said. “Everybody else has had 10, 12, 14 days of playing 5-on-5 every other day, some individual work and all that. I think Bled and Pat just need to play. With playing will come both their conditioning and their rhythm.

“We’re going to make sure they get that back before we put them in an NBA game.”

The Bucks' Khris Middleton was averaging a career best in points per game and shooting percentage for league-leading Milwaukee when the COVID-19 pandemic interrupted the season.

Antetokounmpo scores 16 points playing only the first half as the Nets keep the Bucks from clinching the top seed in the Eastern Conference.

Antetokounmpo will be eligible for Game 1 of the Bucks’ first-round series against Orlando, which will almost certainly be played Monday or Tuesday at Walt Disney World.

Orlando's Nikola Vucevic scored a playoff career-high 35 points and the Magic stunned the top-seeded Bucks 122-110 on Tuesday in the playoff opener of the NBA's pandemic-altered season.

The top-seeded Milwaukee Bucks struggled from the outset of their postseason opener Tuesday afternoon, falling to the Orlando Magic, 122-110, …

Bucks forward Giannis Antetokounmpo predicts it will take some time to return to his usual form heading into Friday's game. "I'll be better when the playoffs start than I will be tomorrow," he said.

Says Bucks TV analyst Marques Johnson, a five-time NBA All-Star, of small forward Khris Middleton: “He’s got this definition I’ve never seen before, his body fat is probably way down — he looks really good, really in great shape. He’s really put in the work during this time off to come back and make himself better physically.” 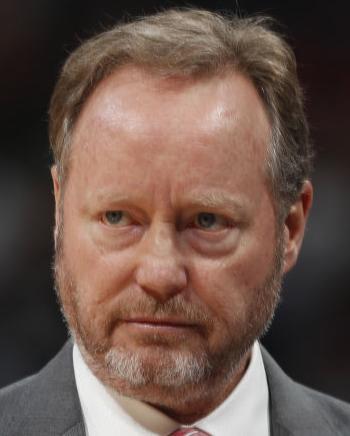