One win from first NBA title in 50 years, Bucks must be the 'most disciplined'
0 Comments
Share this
1 of 2 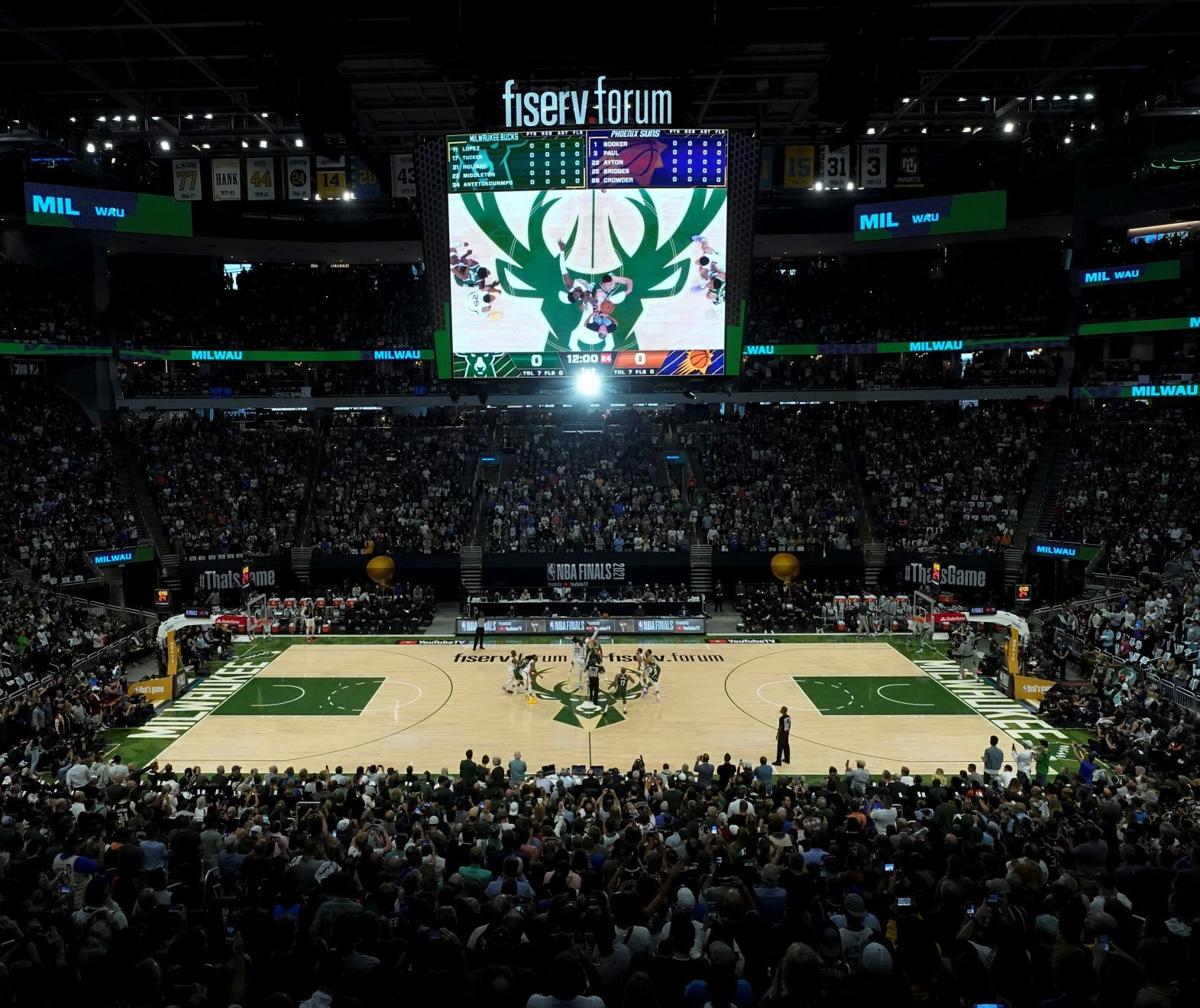 The Bucks and Suns tip off for the start of Game 3 in the NBA Finals on July 11 at Fiserv Forum. The Bucks are 9-1 at home in the playoffs this year. 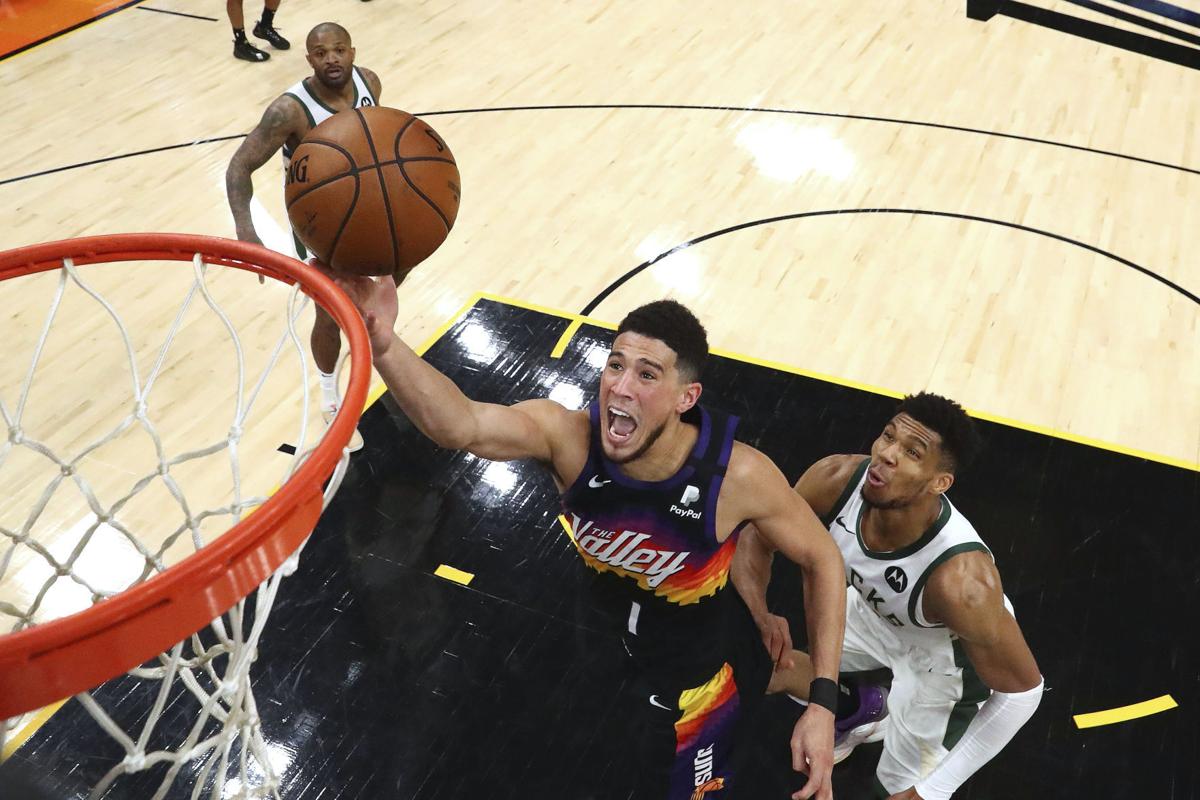 MILWAUKEE — High atop the outside of Fiserv Forum — way above even a leaping Giannis Antetokounmpo’s reach — blares the Bucks’ postseason motto.

“HISTORY IN THE MAKING” it reads, a sign and a situation that’s now impossible to ignore.

And yet, that’s exactly what the Bucks are trying to do.

They can indeed make history Tuesday night as Milwaukee’s first NBA champion since 1971. But the Bucks have to resist thinking about what happens if they beat the Phoenix Suns in Game 6.

“It’s hard, because you work so hard to be in that moment, which is tomorrow,” Antetokounmpo said Monday. “It’s hard not to get ahead of yourself. But this is the time that you’ve got to be the most disciplined.”

The Bucks have won the last three games to set up a potential party 50 years in the making.

Around 17,000 fans are expected inside the arena and the Bucks announced Monday that the Deer District has been expanded to allow up to 65,000 fans to stand shoulder-to-shoulder outside. Barricades line the sidewalks around the arena and restaurants within walking distance were contemplating how to get employees into and back home from work through the anticipated crowds.

It’s a scene that couldn’t have happened for much of this season that has been played during the coronavirus pandemic. The Bucks only began permitting a limited number of fans at games in February, nearly two months after the season began. Even when postseason play started in May, capacity was capped at 9,100, a little above 50%.

Whatever the number is Tuesday, it will sound a whole lot louder if the Bucks are lifting the Larry O’Brien Trophy.

The Suns are excited, too.

That’s how Chris Paul said they feel, despite blowing a 2-0 lead and facing elimination for the first time in this postseason.

“Something that Coach and everybody has been saying: If you went to the beginning of the season and said we had a chance to be where we are right now, would you take it? Absolutely,” Paul said.

“And we get a chance to determine the outcome. It’s not like the game is going to be simulated or somebody else’s got to play. We get a chance. We control our own destiny. So I think that’s the exciting part about it.”

If the Suns do win Tuesday, they would bring the series back to Phoenix for Game 7 on Thursday.

To do so, they will have to call upon the fight they showed in Game 5, when they gave themselves a chance to win in the closing seconds after the Bucks had pounded them for 79 points in the second and third quarters to open a double-digit lead.

The comeback fell short when Jrue Holiday stripped Devin Booker and fired an alley-oop pass to Antetokounmpo, but coach Monty Williams saw a resilience that will be needed now more than ever.

“For us to be able to cut it to one point, you know that was the thing that stuck out to me and gives our staff and team a lot of confidence as we go into this Game 6,” Williams said.

Booker has scored 40 points in two straight games, something Antetokounmpo earlier in the series and only five other players have done in the NBA Finals. Yet as good as he’s been, the star guard said he has to be even better in Game 6.

“We all know what’s at stake and what’s on the line,” Booker said. “Everybody is going to have to give a little bit more because what we have done hasn’t been enough.”

Just two years ago, the Bucks had the league’s best record and were two wins away from their first NBA Finals since 1974 before losing a 2-0 lead in the Eastern Conference finals against Toronto.

That disappointment helped build a Bucks team that doesn’t waver when it’s down. Milwaukee was behind 2-0 to Brooklyn in the second round and is now a victory away from overcoming that deficit again.

The Bucks ended all three series in this postseason on the road. Now they have the chance for the biggest one of all in their building, knowing that won’t make it any easier than their other clinchers.

“It is funny, you want to treat it the same as any other game, but at the same time, it is what it is. It’s a close-out game of the finals,” center Brook Lopez said. “But I definitely think we can take from our other experiences in the playoffs.

“And one thing, you know, if you look all of them, obviously we know that the other team is just not going to roll over and stop playing. They are going to fight till the last second. We have be ready to come out at our best.”

The Suns will be facing an elimination game for the first time in this postseason when they travel to Milwaukee for Game 6 of the NBA Finals on Tuesday night.

Balance, grit has Bucks on verge of first title in 50 years

Milwaukee, which trailed 2-0 in the NBA Finals to Phoenix, can win its first championship since 1971 with a win on Tuesday.

They can win their first title since 1971 in Milwaukee on Tuesday night.

The little-used older brother of star Giannis Antetokounmpo has averaged just 3.5 minutes per game in the postseason.

The Bucks overcame a 2-0 deficit in the second round against Brooklyn and now are trying to become the fifth club to do it in the NBA Finals. That last happened five years ago when Cleveland rallied past Golden State.

Bucks a Wisconsin team even a Minnesotan can love. But why?

Perhaps it's because a Timberwolves fan can look at the Bucks' success and imagine such things happening in Minnesota.

The Phoenix Suns say they aren’t feeling sorry for themselves after squandering a 2-0 lead in the NBA Finals and moving within one game of elimination.

Southern Wisconsin will enjoy highs in the 80s to around 90 into early next week, according to forecasters.

"Great group of guys, hell of a season," Chris Paul said. "But this one's gonna hurt for a while."

The Bucks and Suns tip off for the start of Game 3 in the NBA Finals on July 11 at Fiserv Forum. The Bucks are 9-1 at home in the playoffs this year.