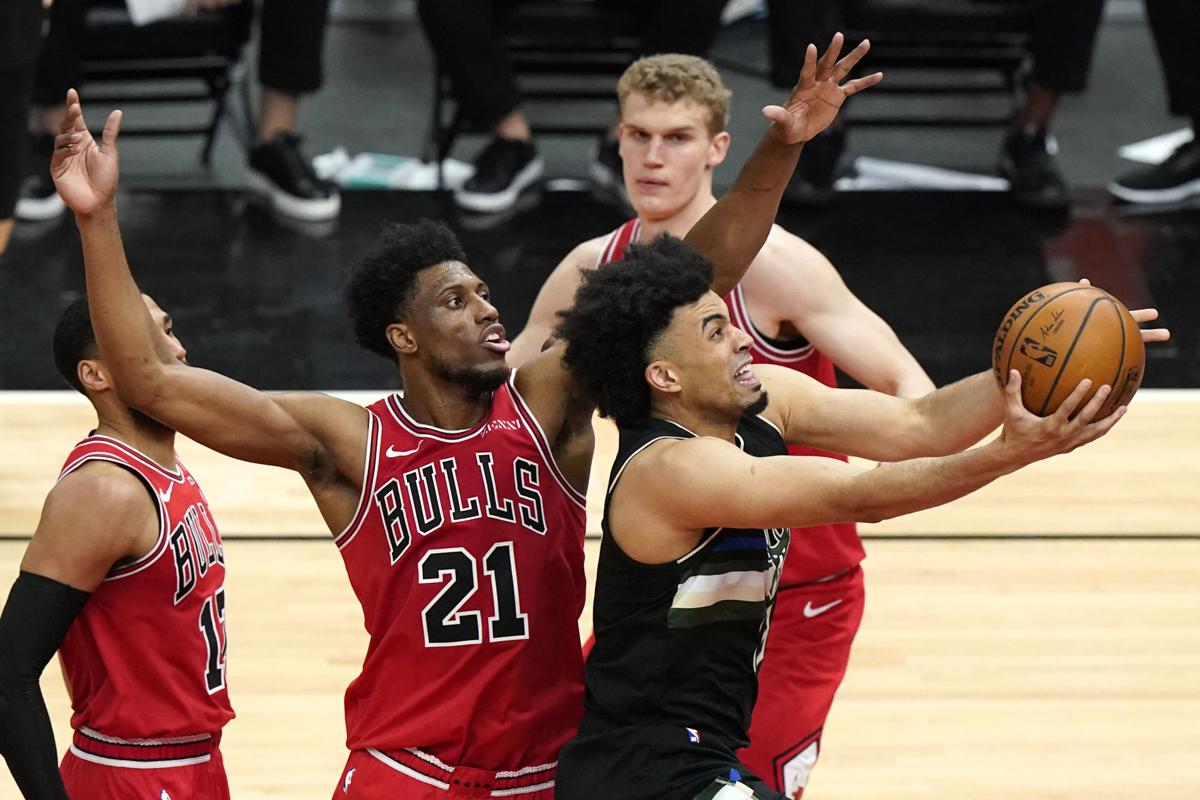 Bucks' Jordan Nwora drives to the basket past Bulls' Thaddeus Young (21) during the first half Sunday night in Chicago. Nwora had 34 points and 14 rebounds. 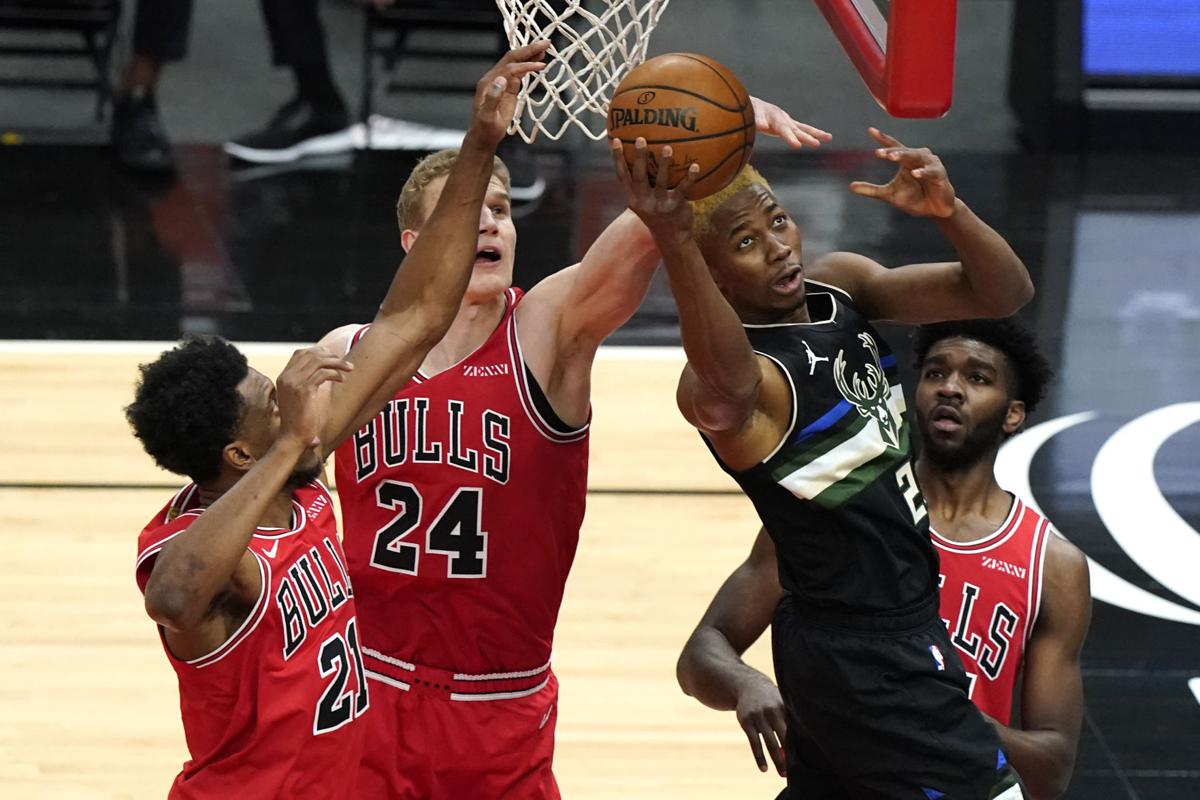 Bucks' Mamadi Diakite goes up for a shot against Bulls' Thaddeus Young, left, Lauri Markkanen, center, and Patrick Williams during the first half Sunday night.

The Bucks ruled Khris Middleton out because of lingering soreness in his left ankle, then scratched Antetokounmpo and the rest of the starters once it became clear the No. 2 seed in the Eastern Conference was out of reach.

The Brooklyn Nets clinched the position by beating the Cleveland Cavaliers. That locked Milwaukee into the third spot and a first-round matchup against the Miami Heat.

Coach Mike Budenholzer saw no need to use his starters with little on the line. The game was the Bucks’ fifth in seven days.

“Once the Brooklyn score went final, I think it was particularly for the starters, a decision that made a lot of sense,” he said. “Give them a day, give them a little extra time.”

Bucks rookie Jordan Nwora set career highs with 34 points and 14 rebounds. Jeff Teague scored 23. But with its top players out, Milwaukee came up short after winning eight of nine.

“I’m really confident in my game,” Nwora said. “I think I can play whenever they need me, just by staying ready. I’m on a great team, behind some great players. Just being patient, being ready.”

The Bulls prevented the Bucks from becoming the first NBA team to go unbeaten in its division, with an 11-1 mark against the Central. Chicago also snapped a 12-game losing streak against Milwaukee.

Lauri Markkanen scored 17, Ryan Arcidiacono set season highs with 14 points and four 3-pointers, and the Bulls finished their first season under coach Billy Donovan on a winning note — even though Zach Lavine (right knee tendinitis) and Nikola Vucevic (hip) did not play. But they know they have work to do if they’re going to contend in the conference.

“Every day for me with these guys was phenomenal,” Donovan said. “It was a great group. ... I’ve got a strong affinity for these guys as people and the way they conducted themselves professionally. It’s hard for me to sit here and say, ‘OK, what does our team need?’”

The Bucks averaged a franchise-record 120.1 points, making them the first team to score 120 or more per game since the 1984-85 Denver Nuggets. ... Middleton missed his fourth game this season. “We feel like if we can kind of get on top of it this 24, 48 hours, I think he’ll be in a great place heading into the week of prep and playoffs,” Budenholzer said. ... Milwaukee forward Thanasis Antetokounmpo exited with a sore right patella tendon.

Seven players score in double figures for Milwaukee in a 122-108 victory at Fiserv Forum.

He scores 27 points as Milwaukee keeps pace in the Eastern Conference.

With another event preventing them from playing in Milwaukee, the Bucks opened their title chase with a 4-1 series win over the San Francisco Warriors, winning one game on the road and all three they played at the UW Field House.

Point guard Jrue Holiday is playing for a legitimate title contender for the first time in his NBA career.

After earning the third seed in the Eastern Conference playoffs this season, the Milwaukee Bucks are looking to avenge their loss to the Miami…

'I like our chances anywhere': Heat's Jimmy Butler 'stupidly locked in' ahead of facing Bucks again in playoffs

The Heat hope that Jimmy Butler comes through again as Miami tries to beat Milwaukee in another run to the NBA Finals.

Miami beat top-seeded Milwaukee 4-1 and went on to win the Eastern Conference title last year before losing to the Los Angeles Lakers in the NBA Finals. Miami is seeded sixth and Milwaukee third in the East heading into the rematch that begins Saturday.

Bucks' Jordan Nwora drives to the basket past Bulls' Thaddeus Young (21) during the first half Sunday night in Chicago. Nwora had 34 points and 14 rebounds.

Bucks' Mamadi Diakite goes up for a shot against Bulls' Thaddeus Young, left, Lauri Markkanen, center, and Patrick Williams during the first half Sunday night.