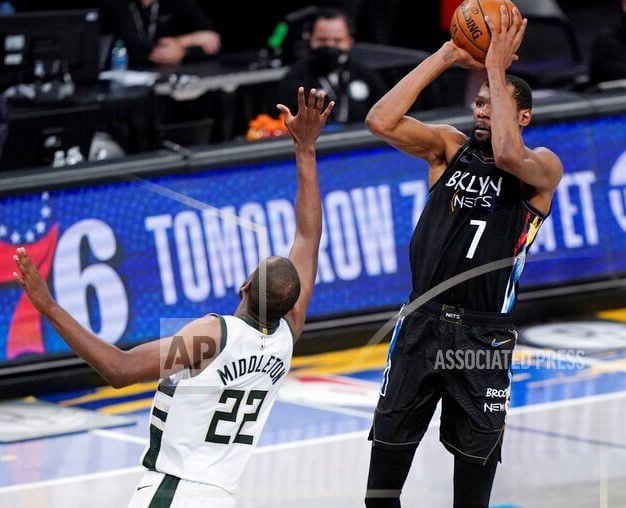 Nets' Kevin Durant, shooting a 3-pointer over Bucks' Khris Middleton during the fourth quarter Tuesday night, made 16 of 23 shots on his way to 49 points. 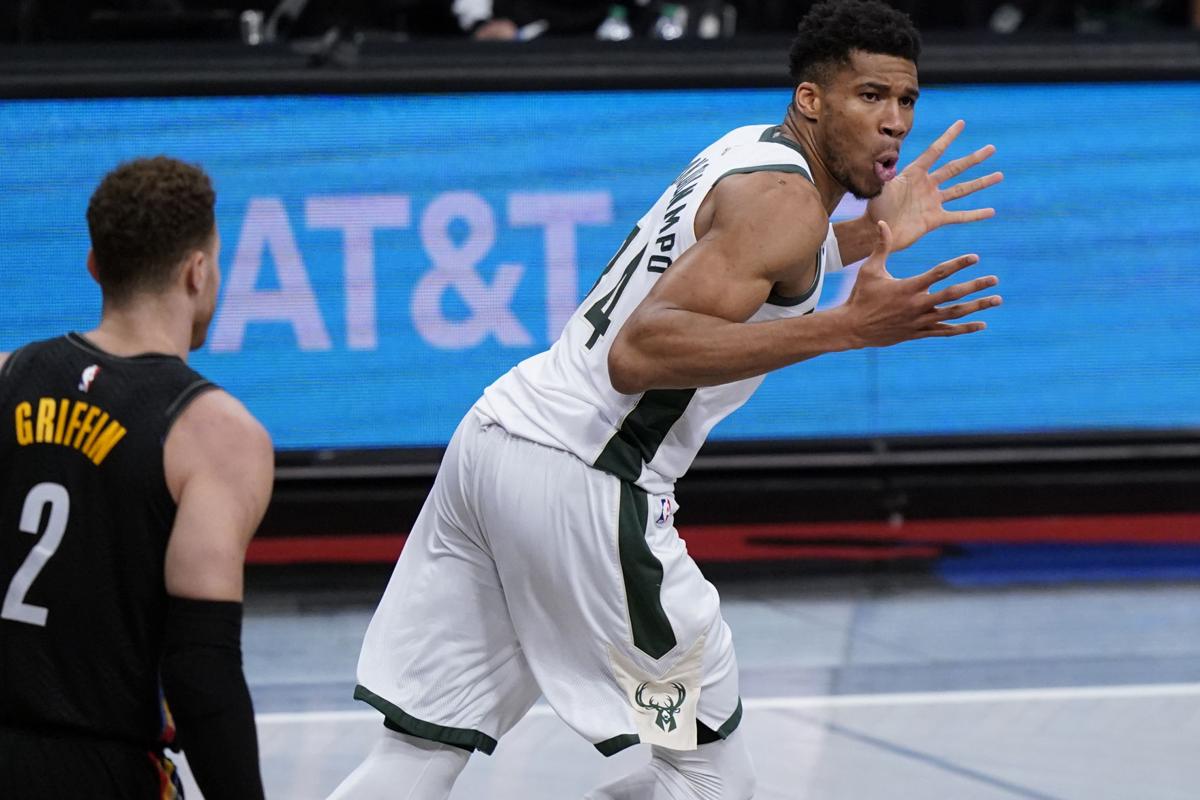 Bucks forward Giannis Antetokounmpo reacts after dunking, next to Nets forward Blake Griffin, during the first half.

NEW YORK — Kevin Durant has always been one of the NBA's most unstoppable scorers.

The Brooklyn Nets needed much more than points Tuesday night, so Durant gave them one of the most spectacular performances in postseason history.

Durant had 49 points, 17 rebounds and 10 assists, sending the Nets back into the lead in the Eastern Conference semifinals with a 114-108 victory over the Milwaukee Bucks in Game 5.

"I know the perception of me is that I can score the basketball well, but any team that I've played on, I've been asked to do pretty much everything from rebounding to defending to initiating to scoring," Durant said. "I might not do it all the time but I do a little bit of everything."

In Game 5, it was a whole lot of everything.

The two-time NBA Finals MVP became the first player to have at least 45 points, 15 rebounds and 10 assists in a playoff game.

With James Harden returning but delivering little offense and Kyrie Irving out, Durant played all 48 minutes and shot 16 for 23 from the field. The four-time scoring champion had 20 points in the fourth quarter, perhaps the biggest shot a 3-pointer with 50 seconds left and the Nets protecting a one-point lead.

"The injuries that he's been through, to come back even from the Achilles to the hamstring to get back in this position, the world is witnessing, once again, who is the best player in the world," Nets forward Jeff Green said.

No argument from the Bucks.

"He's the best player in the world right now and we've got to beat him as a team," Giannis Antetokounmpo said. "We've got to guard him as a team. We've got to make him make tough shots like tonight. We've just got to keep doing our job and hopefully he's going to miss."

Harden played for the first time since leaving 43 seconds into the series opener with right hamstring tightness. He shot just 1 for 10 and missed all eight 3-pointers, but had eight assists and six rebounds while playing 46 minutes.

"I woke up and was like, 'You know what? Let's go,'" Harden said. "I tried to go out there and do the best I can. Hopefully I gave my teammates some encouragement and some life."

Green made seven 3-pointers and scored 27 points for the Nets, who fell into a 17-point hole in this one after two losses in Milwaukee before Durant carried them back. Blake Griffin added 17 points.

Game 6 is Thursday in Milwaukee, where the Bucks are 4-0 against the Nets this season.

Antetokounmpo had 34 points and 12 rebounds, while Khris Middleton added 25 points.

The Bucks had all the momentum after winning the two games in Milwaukee, with Irving spraining his ankle in the second quarter of Game 4. It appeared Durant would be the only one of the three superstars to play Tuesday — which given the way he played, may have been enough anyway.

The Nets originally ruled Harden out on Monday, then upgraded him Tuesday first to doubtful and then questionable. He worked out before the game and seemed to be moving well, jogging off the court into the tunnel after his warmup before being cleared to play.

Nash said before the game the decision to play would rest with Harden. Harden has never won an NBA title and pushed to get back for this game once it became clear the Nets wouldn't have Irving.

"So James is driving this," Nash said. "We have to try to support him the best way we can and be an aide for him to figure this out, but it's a tricky situation but it's one that we're willing to go down with James."

But Harden didn't appear to have full strength in his leg, leaving jumpers short and rarely beating anyone on the dribble.

Durant made sure it didn't matter.

"Special performance by him," Bucks coach Mike Budenholzer said. "Credit to him, some tough shots, so we've got to look at it, figure out getting better."

The Nets were 4 for 20 in the first quarter, 2 for 13 on 3-pointers, and Middleton's three-point play with 33 seconds left gave Milwaukee a 29-1 lead after one.

Durant's basket got it down to 42-33 before Antetokounmpo rattled in a 3-pointer and follow with two more baskets to push the lead to 16, which is where it still was when the Bucks took a 59-43 lead to the half.

The Bucks still led by 16 midway through the third quarter, answering every time the Nets seemed to have any momentum. But Durant then got hot and never really cooled off.

He made all four shots and scored 11 points in the final 6:18 of the third as the Nets pulled to 87-81 on his three-point play with 31 seconds left.

Bucks: Antetokounmpo had his third straight game with at least 30 points and 10 rebounds. He also was the only player to receive All-NBA first-team votes on all 100 ballots, earning his third consecutive first-team selection. ... Jrue Holiday had 19 points.

Nets: Irving was voted to the All-NBA third team, the first All-NBA selection for the Nets since Jason Kidd was voted to the first team in the 2003-04 season. ... The Nets paid tribute to announcer Marv Albert, who was calling the game courtside for TNT. Albert, who is from Brooklyn, is planning to retire after nearly 60 years as a professional broadcaster after calling the Eastern Conference finals.

The Nets own a 3-2 series lead thanks largely to Kevin Durant, who delivered a performance for the ages as Brooklyn rallied from a 17-point deficit to win  114-108 on Tuesday at Brooklyn.

The two powerhouses play in Saturday's Game 7 with a berth in the Eastern Conference finals on the line.

Bust the Process: Hawks will face Bucks in East finals after upsetting 76ers

Atlanta will open its first East finals since 2015 against the Bucks on Wednesday night in Milwaukee.

Milwaukee hasn't reached the NBA Finals since 1974; Atlanta, playing in St. Louis before moving, was most recently a finalist in 1961.

Nets' Kevin Durant, shooting a 3-pointer over Bucks' Khris Middleton during the fourth quarter Tuesday night, made 16 of 23 shots on his way to 49 points.

Bucks forward Giannis Antetokounmpo reacts after dunking, next to Nets forward Blake Griffin, during the first half.