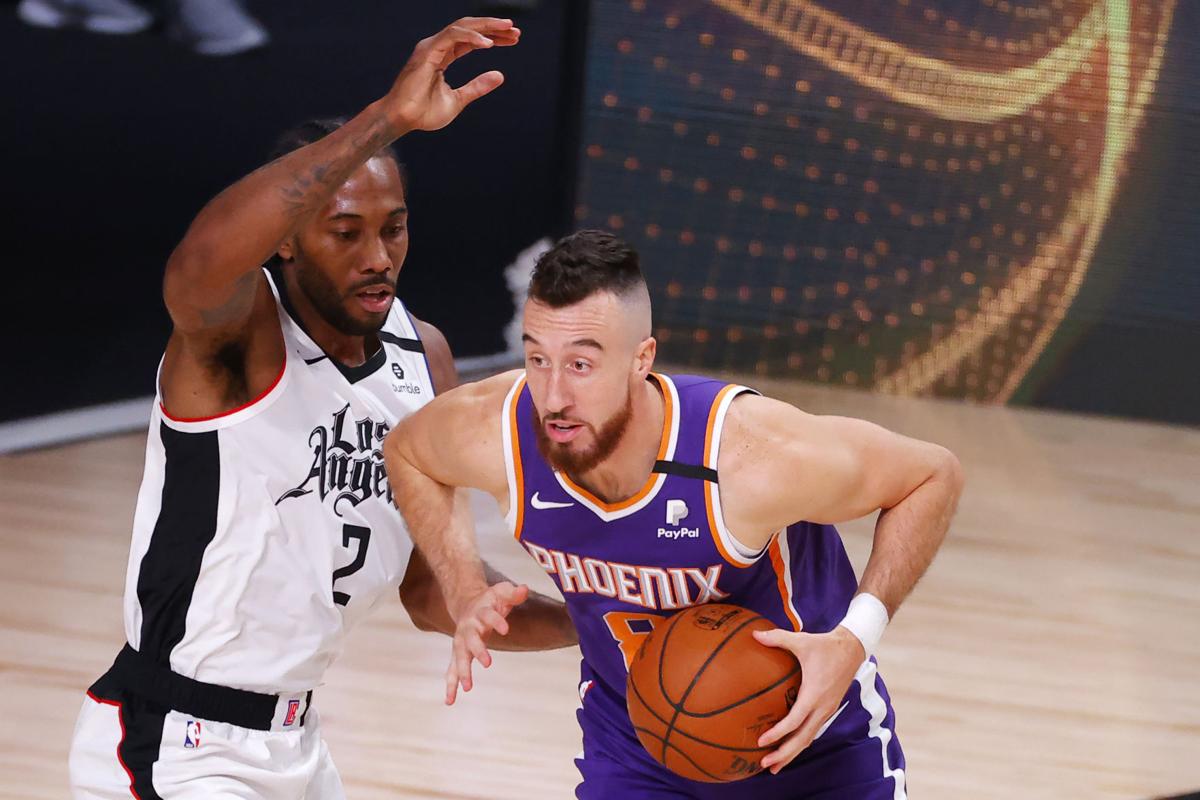 Suns' Frank Kaminsky drives against Clippers' Kawhi Leonard during a bubble game on Aug. 4 in Lake Buena Vista, Fla. Phoenix holds a team option on his contract for next season. 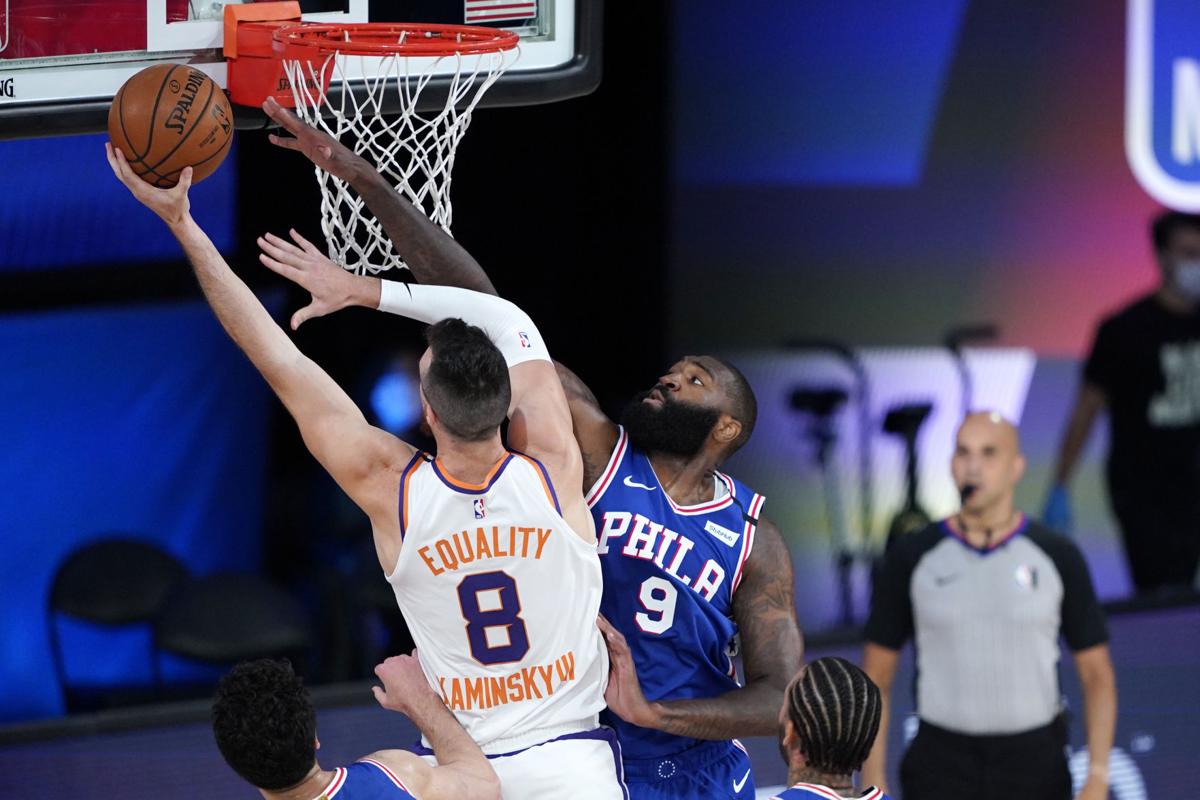 Frank Kaminsky averaged 9.7 points and 4.5 rebounds in 37 games with the Suns this season.

While Marvin Williams’ retirement last week didn’t generate much buzz around the NBA, one player in particular took notice.

Williams was a decade into his 15-year career when Frank Kaminsky arrived in the NBA in 2015. Kaminsky, a former University of Wisconsin men’s basketball star who was a top-10 pick, never will forget the way he was treated by Williams during his rookie season.

By then, Williams was 29 and with his third organization. Kaminsky was a 22-year-old fresh off winning consensus national player of the year honors to cap off his college career with the Badgers.

“He kind of took me under his wing and showed me how to work,” Kaminsky said of Williams, whose final stop was with the Milwaukee Bucks. “He kind of explained to me it’s not easy, it doesn’t happen right away for everybody, so you’ve got to continue to keep working, and that’s what I do.”

Kaminsky took some time last week to reflect on hitting the half-decade mark in the NBA, a stretch to him that’s felt like a blur. Five years is a long time in some ways, but Kaminsky believes he’s closer to the beginning of his pro career than the end.

He’s had plenty of reminders there are no guarantees in his profession. Former UW teammate Sam Dekker, chosen nine picks behind Kaminsky in the 2015 draft, played three years in the NBA and signed this offseason with a team in Turkey after playing last season in Russia.

Even Kaminsky has had to deal with change. Charlotte parted ways with Kaminsky once his rookie contract ran out, leaving the 7-footer to find a new team as a free agent.

Kaminsky landed with the Suns and averaged 9.7 points and 4.5 rebounds in 37 games during his first season in Phoenix, a campaign that was marred by the first major injury of his career.

Ask Kaminsky to evaluate his time in the NBA and two things stand out: He’s both grateful for what he has and hungry to take the next step.

“It’s extremely difficult to get into the NBA, I’ve learned that. It’s even harder to stay,” said Kaminsky, who helped lead the Badgers to back-to-back Final Four appearances, including the national title game as a senior.

“I guess for most people, it doesn’t really necessarily make a difference how you get there, it says a lot more about you about how long you stay in it and what people think about you in the NBA community. Obviously, there are a lot of people who are one-and-dones who go on to have extremely successful NBA careers and there are a lot of one-and-dones who just don’t make it. I’m lucky I’ve gotten my five years so far and I hope I can continue my career for as long as I want.”

Kaminsky, like everyone else, is ready for a return to normalcy.

“I just want (the COVID-19 pandemic) to be over,” he said. “I miss a lot of things. You know me, I just go and do things. This is the first time where we just ever had to just sit and wait and see what happens. I’m not really a sit-and-wait-and-see-what-happens kind of person.”

Kaminsky had to do a lot of sitting and waiting last winter after injuring his right knee in mid-December. He tried to play through it for about two weeks before being diagnosed with a patella stress fracture, an injury that could have wiped out the rest of his season if it hadn’t been suspended due to the pandemic.

This wasn’t Kaminsky’s first rehab stint — he had lung surgery following his rookie season — but it was the first time he missed an extended stretch of games due to injury. He described the process as long and slow, with constant MRI and CT scan checkups that showed progress but not enough to Kaminsky’s liking.

The restart to the season gave Kaminsky a chance to get back on the floor and shake off the rust in limited minutes. The best thing it did, as far as Kaminsky is concerned, is gave the Suns some momentum to take into the offseason.

Phoenix arrived in Orlando with the 13th-best record in the Western Conference, with a six-game deficit in the race for the No. 8 seed. The Suns went 8-0 in the bubble and still ended up a half-game short of the play-in game, with Portland’s 134-133 victory over the Brooklyn Nets in the regular-season finale clinching the No. 8 seed for the Trailblazers.

Kaminsky described life in the bubble as strange but said the NBA did a good job with the setup and keeping players and staff safe. As for life on the court? “Honestly, at points it felt like some glorified AAU-type environments,” he said. “But the virtual fans and the noise and everything definitely helped make you feel like you’re not just in a ballroom.”

Could this be the start of something for the Suns? Kaminsky believes so. The core of a young team includes a pair of 24-year olds, Devin Booker and Kelly Oubre Jr., and 22-year-old center Deandre Ayton.

“It’s inspiring what happened (in Orlando),” Kaminsky said, “but it definitely leaves a sour taste in your mouth.”

The change of scenery to Phoenix suited Kaminsky and he hopes to be part of the organization’s future going forward. There’s no guarantee that will happen, because the Suns have to execute a club option for around $5 million on Kaminsky for the 2020-21 season.

As a 7-footer who can shoot from the perimeter, Kaminsky believes there’s a place for him on an NBA roster. He’d like it to be in Phoenix, where he can be the primary backup to Ayton at center.

“I’ve had some really good stretches in my career but I haven’t put it together for an extended period of time and that’s something I know I can do and something I keep working towards,” Kaminsky said. “I know it’s going to happen one day, so I’m going to keep working for that and that’s really how my first five years have gone.”

Kaminsky said he never really spoke to Williams about their paths to the NBA. While both were top-10 picks, Williams went No. 2 overall in 2005 after spending only one season at North Carolina. Kaminsky, meanwhile, played four seasons at UW and arguably developed as much as anybody in program history, going from reserve to star almost overnight.

“I didn’t really have too many expectations coming into the NBA because everything for me in college happened so fast. It wasn’t like I planned for it,” Kaminsky said. “After my first two years, I was thinking about what kind of job I’d have after I was done with college. When it happens like that, you just kind of put your head down and work.”

Which is exactly what Williams told him to do that first season in Charlotte. And now, five years later, Kaminsky would like to take that advice and pay it forward the rest of his career.

“That’s something that I would love to be one day, a veteran presence that people can look up to,” Kaminsky said. “He really set the example for everybody, not just on the court. Off the court, you cannot speak more highly just how good he was to everybody in the organization, from training staff to the support staff to the video guys, just to everybody, how he includes everybody and makes them feel comfortable and part of something.

“That’s something I want to be one day.”

“It’s just not the way anybody wants to do this,” UW assistant coach Joe Krabbenhoft says. “Unfortunately, we’re in this situation and we have to.”

Badgers men's basketball coach Greg Gard has stressed to his seven seniors the important role they’ll play while serving as a bridge between the present and the future of the program.

Badgers basketball forward Micah Potter said he knew within 72 hours of meeting Loyola University volleyball player Elle Van Grinsven that she was the one.

Freshman point guard Lorne Bowman has taken a leave of absence from the UW men's basketball program to tend to a personal family matter.

"They will be an excellent fit for our program, both on and off the court," UW coach Greg Gard said of 2021 recruits Chris Hodges, Chucky Hepburn and Matthew Mors.

With opener 2 weeks away, Badgers men's basketball 2020-21 schedule still a work in progress

Less than two weeks remain until UW can officially start the 2020-21 season, but it has yet to finalize a schedule. "It's become a monumental task," Badgers coach Greg Gard said.

The Badgers, who earned a share of the Big Ten title last season, are picked to finish third despite returning almost their entire rotation.

Suns' Frank Kaminsky drives against Clippers' Kawhi Leonard during a bubble game on Aug. 4 in Lake Buena Vista, Fla. Phoenix holds a team option on his contract for next season.

Frank Kaminsky averaged 9.7 points and 4.5 rebounds in 37 games with the Suns this season. 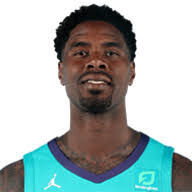