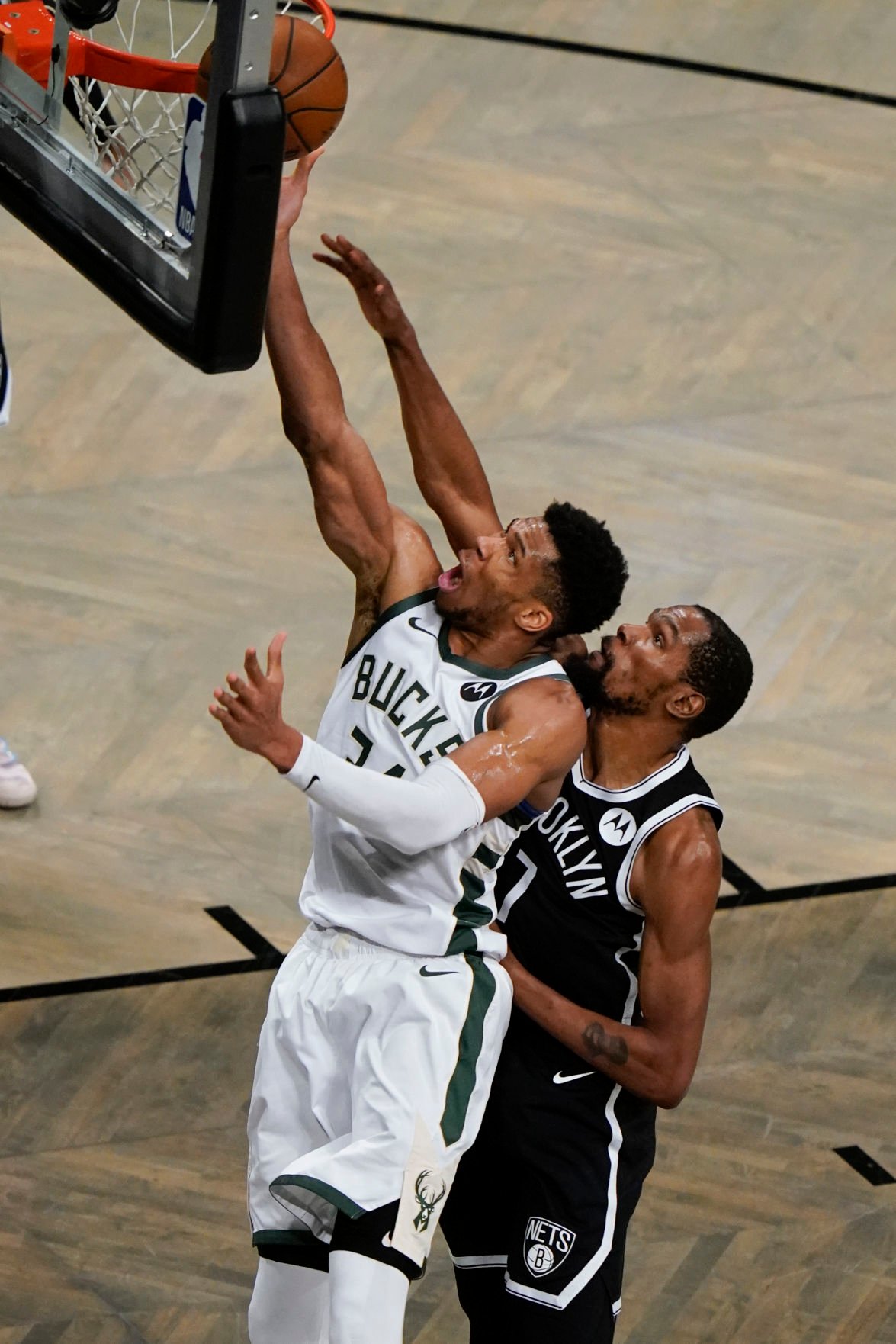 Bucks' Giannis Antetokounmpo shoots as Nets' Kevin Durant defends during the second half Saturday night. Antetokounmpo scored 40 points on 15-for-24 shooting and had 13 rebounds. 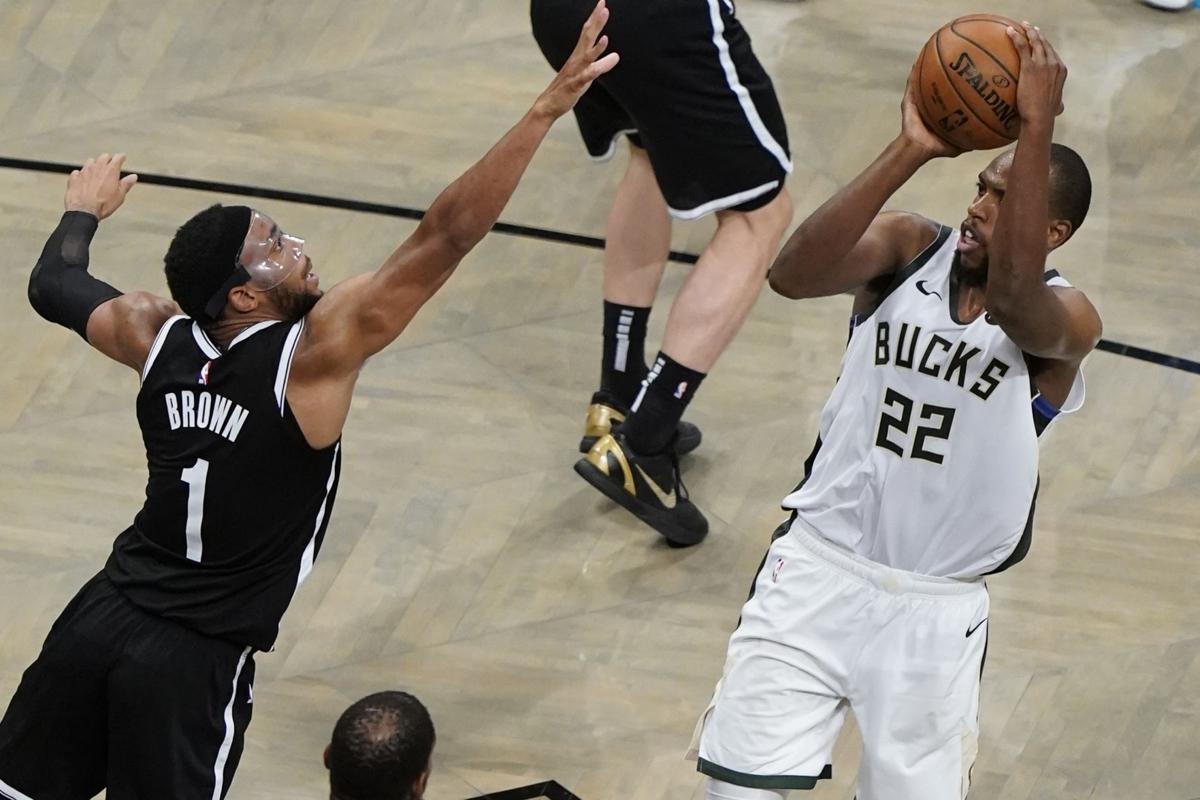 NEW YORK — A Game 7 thriller, the NBA's first do-or-die game to go to overtime in 15 years, came down to a matter of inches.

If Brooklyn star Kevin Durant was just slightly farther away — or if his foot was slightly smaller — he ends the highest-scoring Game 7 ever by an NBA player with a 3-pointer to win the series.

"We got lucky his toe was on the line and they called it a 2," Milwaukee's Khris Middleton said. "But once he hits that shot, we've got to forget about it. There's still ballgame left. That wasn't the game."

And given a second chance, the Bucks cashed it in for a ticket to the Eastern Conference finals.

The Bucks withstood Durant's NBA-record 48 points in a Game 7, beating the Nets 115-111 on Saturday night.

Giannis Antetokounmpo had 40 points and 13 rebounds, and Middleton made the tiebreaking shot with 40 seconds left in OT.

"At the end of the day, I try not to get too high, not to get too low. But I almost got emotional a little bit out there because the team really tried their best," Antetokounmpo said. "We kept our composure. We were down 2-0. A lot of people didn't believe we could make it."

The Bucks held on when Durant missed two late jumpers, the last an airball with 0.3 seconds remaining.

"We got good looks there in overtime. We just didn't knock them down," Durant said. "Respect to the Milwaukee Bucks in how they prepare, how they challenged us all series and made adjustments all series. We've got nothing but respect for that ballclub."

Middleton added 23 points and 10 rebounds for the Bucks, who reached the East finals for the second time in three years. They will play either Philadelphia or Atlanta in a series that starts Wednesday night.

Durant played all 53 minutes and forced OT with a turnaround jumper that was just inches from being a 3-pointer that would have won it with a second left.

"But my big ass foot stepped on the line," he said. "I just saw how close I was to ending their season with that shot."

Durant added nine rebounds and six assists, but didn't have enough help with injured Kyrie Irving watching from the baseline and James Harden unable to locate his shot after missing most of the first four games with right hamstring tightness.

Harden had 22 points, nine rebounds and nine assists, but was 5 for 17 from the field.

"I was just going out there and trying to give everything I can and it's just frustrating," Harden said.

In a series where the teams often didn't produce the quality of play that was anticipated between the league's two highest-scoring teams, Game 7 was a thriller, the first to need extra time since Dallas beat San Antonio in the 2006 Western Conference semifinals.

The Bucks had a 109-107 lead before Middleton missed a 3, but the Bucks got the rebound. They then turned it over on a shot clock violation to give the Nets a final chance with 6 seconds left. They threw it in across the court to Durant, who hit a spinning, turnaround jumper from just inside the 3-point line — maybe even on top of it — to tie it at 109.

Bruce Brown scored on a follow shot to open overtime but neither team scored again until Antetokounmpo's basket with 1:12 to play. Brook Lopez blocked Durant's shot on the other end before Middleton broke the final tie of the series.

Durant tried to prolong it again, dribbling up the floor and running down the clock before launching a long look that came up well short.

Lopez had 19 points for the Bucks, who were knocked out in this round last year after finishing with the NBA's best record. Jrue Holiday shook off a poor shooting night to finish with 13 points, eight assists and seven rebounds.

Blake Griffin had 17 points and 11 rebounds for the Nets, who thought they had a title contender after acquiring Harden but had their three superstars on the floor together for just 43 seconds in this series. They lost for the first time at home in the postseason.

The Nets had struggled with slow starts but put together a good one in Game 7, getting 10 points from Durant to lead 28-25 after the opening quarter.

Middleton and Holiday were both 2 for 11 in the first half, combining to miss all six 3-pointers in a rehash of their shooting struggles from when the series began in Brooklyn.

The Nets capitalized on the Bucks' misfires - Antetokounmpo shot an airball on a free throw and Lopez and Holiday hit the side of the backboard on long jumpers during one ugly stretch - to open a 51-41 lead on Harden's three-point play with 1:59 left in the half.

Down six at halftime, the Bucks came out of the break with a 7-0 burst to grab a 54-53 edge. The Nets regrouped and were ahead 79-74 with under 2 minutes remaining, but the Bucks closed strong to take an 82-81 lead to the fourth.

Antetokounmpo had his fifth straight game with 30 points and 10 rebounds, tying Kareem Abdul-Jabbar’s franchise playoff record that he set in 1974.

Durant had his third 40-point game of these playoffs. The Nets have only had three other 40-point postseason games in their NBA history. ... Brown had 14 points after playing just 4½ minutes in Game 6.

The two powerhouses play in Saturday's Game 7 with a berth in the Eastern Conference finals on the line.

The Nets own a 3-2 series lead thanks largely to Kevin Durant, who delivered a performance for the ages as Brooklyn rallied from a 17-point deficit to win  114-108 on Tuesday at Brooklyn.

The highest severe weather threat will be in far southern Wisconsin near the Illinois border, with tornadoes possible, according to forecasters.

Bust the Process: Hawks will face Bucks in East finals after upsetting 76ers

Atlanta will open its first East finals since 2015 against the Bucks on Wednesday night in Milwaukee.

Even after elimination, Nets still championship favorites for next season

Injuries derailed the Nets this season, but they are confident of winning the title next season.

After firing coach Lloyd Pierce and replacing him with Nate McMillan as interim coach, the Hawks have gone 35-15, including beating the Knicks and 76ers in the playoffs.

Milwaukee hasn't reached the NBA Finals since 1974; Atlanta, playing in St. Louis before moving, was most recently a finalist in 1961.

Atlanta's 6-foot-9, 235-pound John Collins did more than dunk to help the Hawks beat the 76ers in their grueling matchup: he also provided important defensive help against Joel Embiid.

Michael Cunningham: Breaking down how Hawks match up with Bucks, plus a series prediction

After beating the Knicks and 76ers, the Hawks are set to face the Bucks, yet another great defensive team, and two-time MVP winner Giannis Antetokounmpo.

Atlanta improved to 6-2 in road playoff games this year as it handed Milwaukee its first home loss of the postseason.

Without being weighed down by expectations or memories of previous playoff disappointments, Atlanta is playing its best when games are on the line.

Milwaukee led by at least 30 points throughout the second half and blew out the Atlanta Hawks 125-91 in Game 2.

Commitment to Olympics not a distraction for Bucks' Khris Middleton, Jrue Holiday

Khris Middleton and Jrue Holiday plan to play for USA Basketball in the Tokyo Olympics that start next month, yet both insist that isn't distracting them from the Bucks' quest to win the franchise's first NBA title in 50 years.

Khris Middleton scored 20 of his playoff career high-tying 38 points in the fourth quarter, leading Milwaukee to a 113-102 victory over Atlanta for a 2-1 lead in the Eastern Conference finals.

Trae Young underwent an MRI on Monday that showed a bone bruise, and the Hawks' star was listed as questionable for Game 4.

Bucks' Giannis Antetokounmpo shoots as Nets' Kevin Durant defends during the second half Saturday night. Antetokounmpo scored 40 points on 15-for-24 shooting and had 13 rebounds.