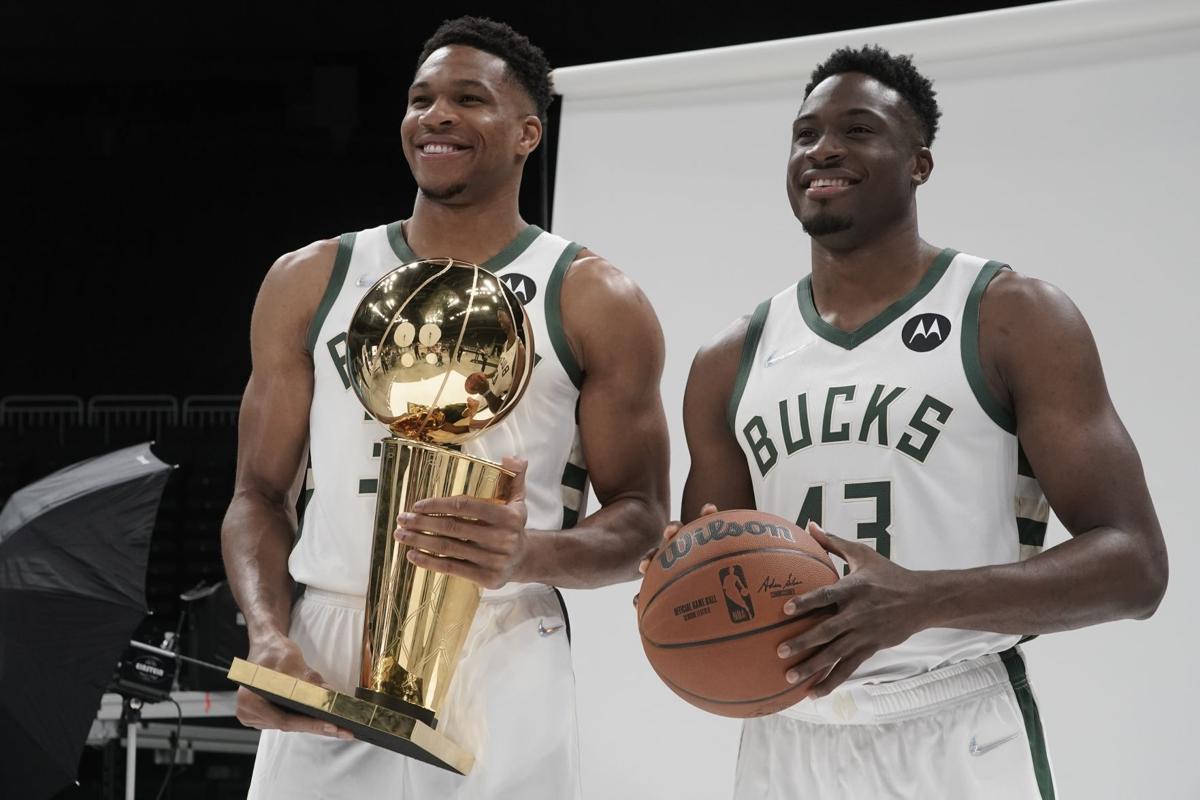 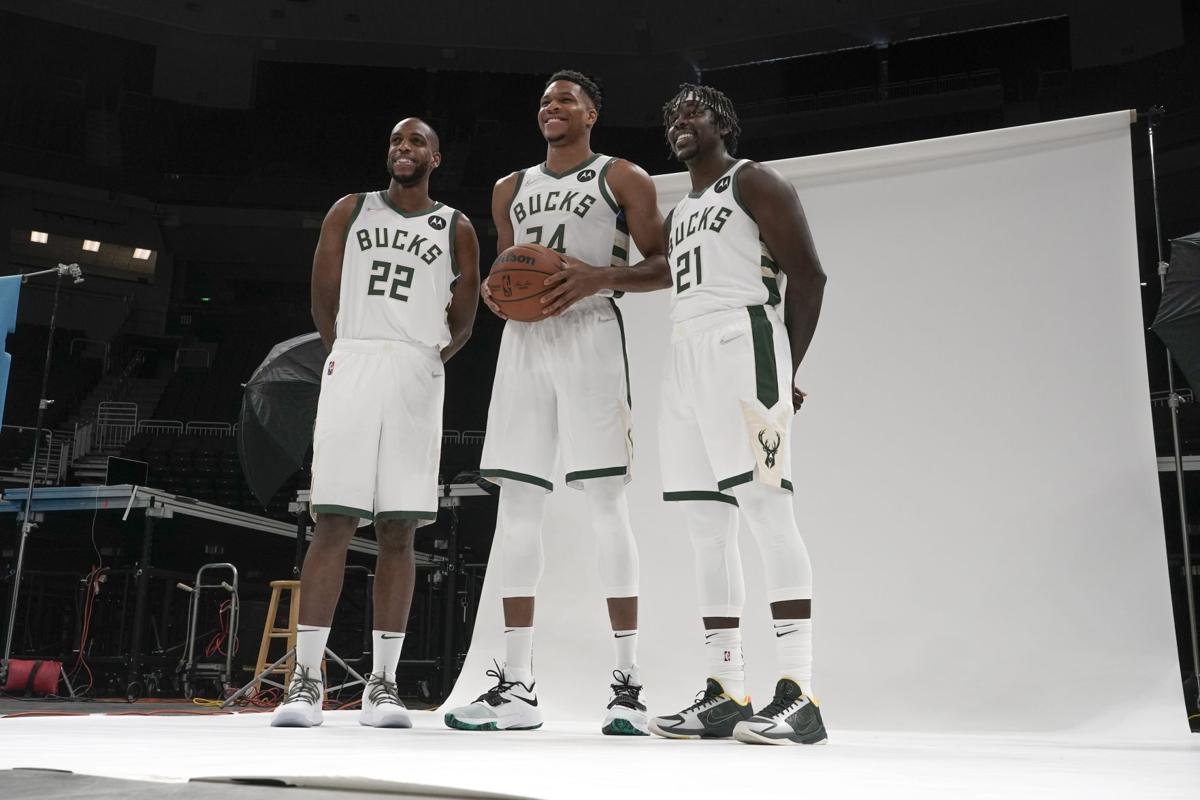 Milwaukee Bucks' Giannis Antetokounmpo is flanked by Khris Middleton and Jrue Holiday as they pose for a picture during an NBA basketball media day Monday, Sept. 27, 2021, in Milwaukee. (AP Photo/Morry Gash) 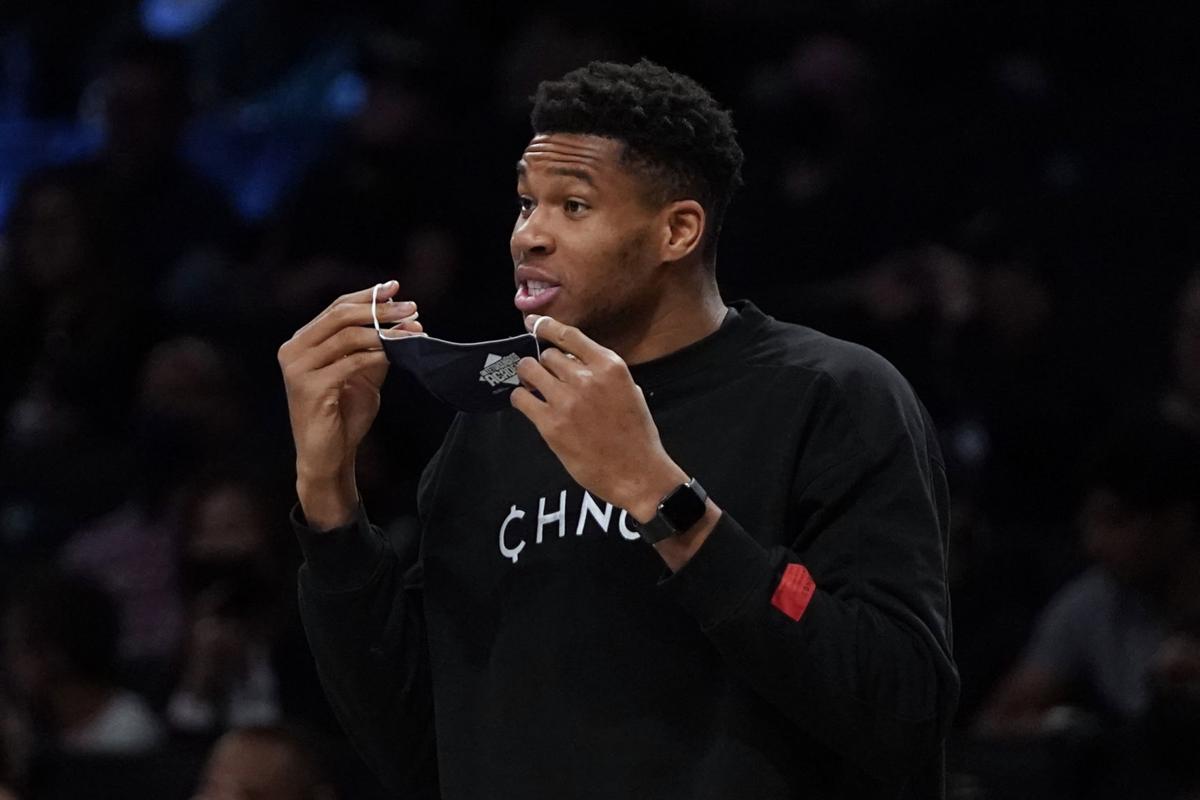 Milwaukee Bucks' Giannis Antetokounmpo calls out to his teammates during the first half of a preseason NBA basketball game against the Brooklyn Nets on Friday, Oct. 8, 2021, in New York. (AP Photo/Frank Franklin II) 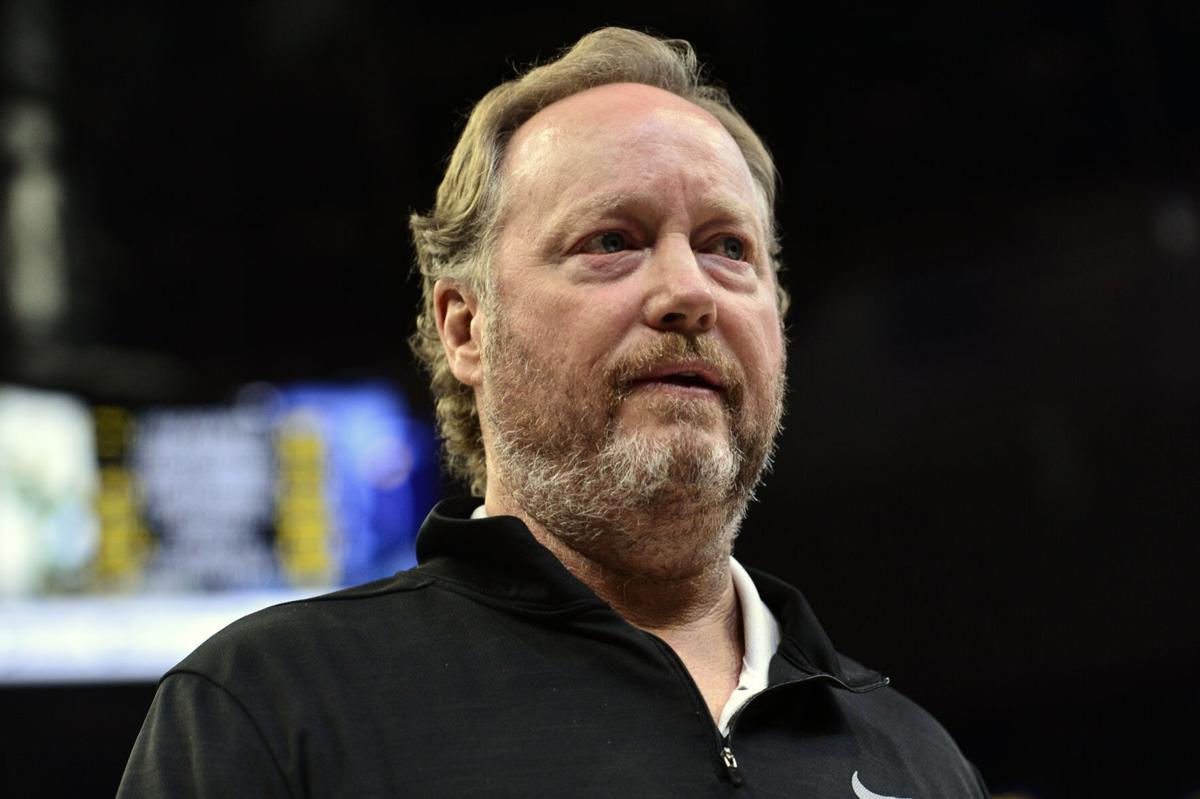 Milwaukee Bucks head coach Mike Budenholzer stands on the court in the first half of an NBA preseason basketball game against the Memphis Grizzlies Tuesday, Oct. 5, 2021, in Memphis, Tenn. (AP Photo/Brandon Dill)

MILWAUKEE — The Milwaukee Bucks sure didn’t get much time to celebrate their first NBA championship in a half-century.

Just three months after Giannis Antetokounmpo’s 50-point performance secured a title-clinching victory over the Phoenix Suns in Game 6 of the NBA Finals, the Bucks will be raising their championship banner and beginning a new season on Oct. 19.

The offseason was particularly brief for Khris Middleton and Jrue Holiday, who left for Tokyo shortly after the championship parade and won gold medals with the U.S. Olympic team.

“It was crazy,” Holiday said.

They got just a little time to come home and rest before beginning the process of trying to repeat. They realize the necessity of maintaining the same tenacity that helped carry them to the franchise’s first championship since 1971.

The Bucks open the season against the Brooklyn Nets, who would have eliminated them in the second round of the 2021 playoffs if Kevin Durant’s foot hadn’t crept across the 3-point arc while making a shot in Game 7.

Throughout their championship run, the Bucks were driven by their past postseason failures. The Bucks no longer have that as incentive but say they’ll remain as motivated as ever.

“Teams are going to be coming for us,” Antetokounmpo said. “But we have to have that hunter mentality ourselves.”

Milwaukee returned most of the key players from last season, though P.J. Tucker left for the Miami Heat and Bryn Forbes rejoined the San Antonio Spurs. They added Grayson Allen, Semi Ojeleye and George Hill to their bench.

That depth could be tested.

The Bucks may need to monitor their top players early in the season because they had so little rest during this abbreviated offseason.

Antetokounmpo, who hyperextended his left knee in the Eastern Conference finals, says he feels good but will be careful with his knee early in the season. The Bucks also must make sure they don’t overwork Holiday and Middleton after their busy offseason.

“They’re usually pretty good at being able to read guys and their bodies,” Holiday said. “Not only that, they’re good at maintenance and maintaining.”

The Bucks are banking on a successful return from Donte DiVincenzo, who tore a left ankle ligament in a first-round playoff series with Miami and missed the rest of the postseason. DiVincenzo started 66 games and averaged 10.4 points last season. The Bucks haven't announced when they expect DiVincenzo to play again.

Allen didn’t exactly get a warm reception from local fans when the Bucks acquired him from Memphis during the offseason. They remember how Allen ruined Wisconsin’s national championship dreams by scoring 16 points as Duke beat the Badgers 68-63 in the 2015 NCAA Tournament final.

“When I was first traded, 30 minutes later, I would say about 80% of my mentions were angry Wisconsin fans not happy I was coming to Milwaukee,” Allen said.

This marks Hill’s second stint in Milwaukee. He played for the Bucks from 2018-20 and provided quality 3-point shooting off the bench before getting included in the four-team trade that brought Holiday to Milwaukee.

“They had to make that trade to get a guy like Jrue, which is a no-brainer in every situation,” Hill said. “He’s the best point guard in the league in many people’s eyes. There’s no hard feelings.”

Hill also was one of the leaders of the Bucks’ 2020 protest in the bubble that led to a temporary postponement of NBA playoff games.

The Bucks are coming off a season in which they scored 120.1 points per game. That made them the NBA’s highest-scoring team since 1983-84, when the Denver Nuggets and San Antonio Spurs both exceeded that average.

“You acknowledge that, yes, it is different,” Budenholzer said. “There are going to be things that are a little bit unique following a championship. But there’s going to be a lot of things that are very much the same – the competitive nature of the league, the way people are going to come after you. I think our players always embrace that competition and the need to kind of raise to that level.”

Watch now: Bucks fans share their thoughts on the team's parade and celebration

Bucks fans lined the streets of downtown Milwaukee on Thursday to see the team's parade and NBA championship celebration. Four of them discuss…

The NBA Finals MVP scores eight points in 17 minutes against the Thunder.

With Milwaukee sitting its stars, the Nets beat the Bucks 119-115 on Friday night in an exhibition rematch of last season's Eastern Conference semifinals

The NBA released tentative health and safety protocols to its teams Tuesday, detailing how players who haven't gotten the COVID-19 vaccination…

Bobby Portis and Co. know this season will be different. "People are going to start hunting us," Portis said. "It's going to be a championship game every night."

This will be the third NBA season affected at least in part by the pandemic, almost certainly not the last, and some teams revealed that their rosters are 100% vaccinated entering the season.

"Before I got traded to Milwaukee, Miami was at the top of the list," P.J. Tucker said. "The way they play, the guys, the personnel, I knew the way I would fit in. I've been a Miami fan for a while."

The Bucks announced the hiring Wednesday and said Byington is the first woman to work as a full-time television play-by-play announcer for any major men’s professional sports team.

NBA West preview: Lakers may be team to catch, if age doesn't trip them up

"The narrative about our age, I kind of laugh at it," LeBron James said. "I really do laugh. I'm not just saying that."

Even with holes to fill in his game, Bucks superstar Giannis Antetokounmpo is already among the best players in the NBA.

It’s only a matter of time before Giannis Antetokounmpo becomes Milwaukee’s all-time leader in most major statistical categories — and the first records should fall this season.

Giannis Antetokounmpo had 32 points, 14 rebounds and seven assists in the 127-104 victory at Fiserv Forum.

Milwaukee Bucks' Giannis Antetokounmpo is flanked by Khris Middleton and Jrue Holiday as they pose for a picture during an NBA basketball media day Monday, Sept. 27, 2021, in Milwaukee. (AP Photo/Morry Gash)

Milwaukee Bucks' Giannis Antetokounmpo calls out to his teammates during the first half of a preseason NBA basketball game against the Brooklyn Nets on Friday, Oct. 8, 2021, in New York. (AP Photo/Frank Franklin II)

Milwaukee Bucks head coach Mike Budenholzer stands on the court in the first half of an NBA preseason basketball game against the Memphis Grizzlies Tuesday, Oct. 5, 2021, in Memphis, Tenn. (AP Photo/Brandon Dill)