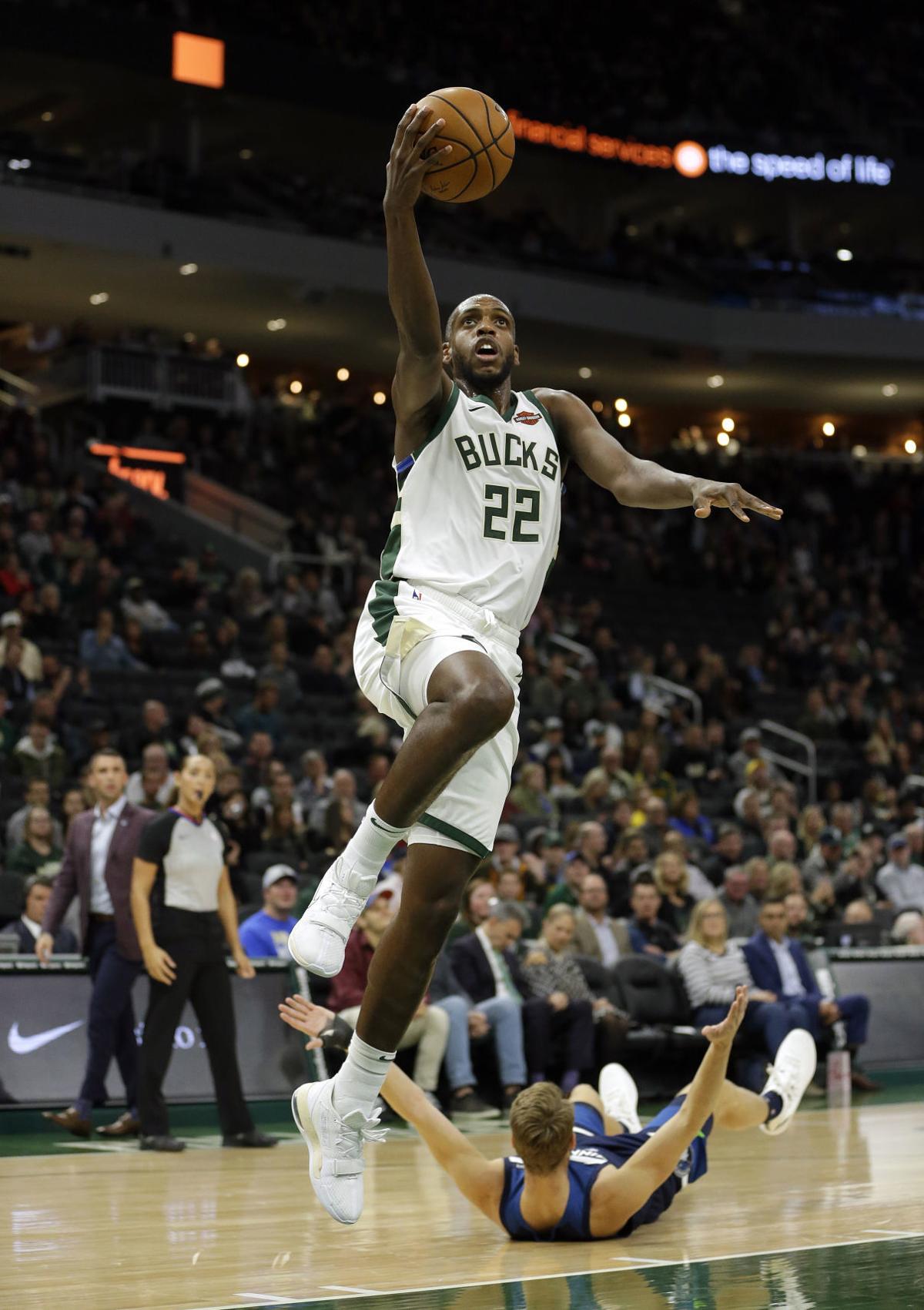 Bucks' Khris Middleton scored in double figures in all but one of his 55 games this season before the NBA shut down due to the coronavirus. 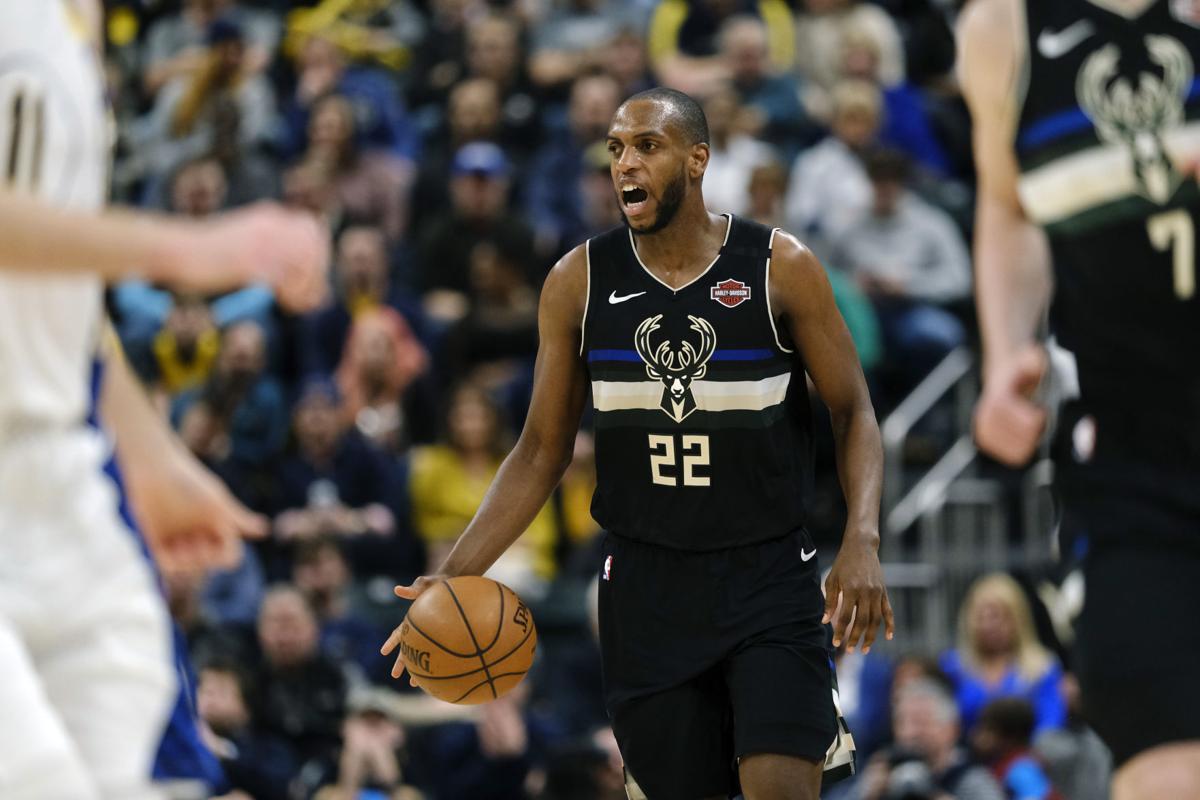 MILWAUKEE — Upon signing a $178 million contract last summer, Khris Middleton decided to spend some of his earnings on a home improvement project, adding a fitness center to his house — an investment that has paid off handsomely.

The Milwaukee Bucks’ wing has been putting the new addition to great use over the past few months.

With the league slowly churning back into gear ahead of a July 31 restart in Orlando, Florida, Middleton admits his workout routine won’t provide an advantage, per se, but does give him a head start as he and his teammates resume their quest for an NBA championship.

“This is unlike anything I’ve ever experienced,” Middleton said of the ongoing COVID-19 pandemic in a conference call with reporters Friday. “But it definitely feels great to be back in the gym and doing what I love to do.”

Middleton was enjoying one the best season of his career when the NBA put things on hold back in March. He was averaging 21.1 points, 6.2 rebounds and 0.9 steals in 30.1 minutes of work and coming off his second consecutive appearance in the All-Star Game.

He also was on the verge of making history, needing just one made basket to boost his field goal percentage over 50% for the season. Adding that to his 48.8% 3-point percentage and 90.8% mark from the free throw line, Middleton is in position to become the second Bucks player to average 50-40-90 in as many seasons.

“Hopefully I’m able to achieve that,” Middleton said. “That would be one of the best shooting percentages or numbers in league history with a lot of Hall of Fame guys. So, to add my name to a list of Hall of Fame players is incredible.”

More incredible, of course, would be getting through the eight-game “regular season” healthy and making a deep playoff run that ends with the franchise’s first championship since 1971.

Such an accomplishment will require a tremendous effort and strict discipline on the court, where the Bucks had compiled a league-best 53-12 record before the shutdown, but also off the court, where the league has instituted a lengthy list of restrictions, guidelines and precautions in place with the hopes of protecting players from contracting and spreading the coronavirus.

The likelihood someone, himself included, will test positive is real and Middleton admits there is a slight sense of nervousness about what might happen.

Still, he and his teammates have to trust in the process established by the league and players’ association.

“I don’t think guys are scared to go down to Orlando because of the virus,” Middleton said. “But they’re definitely going to be a little bit cautious and I think everybody has to be.”

There’s also the matter of being separated from family and friends for as long as three months. In the kind of strange juxtaposition that only makes sense in the upside-down world that is 2020, Middleton spent the past few months surrounded by his loved ones but with minimal basketball activity. Now, he and his teammates will have to adjust to the exact opposite of the spectrum as they enter what the NBA hopes is a safe, secluded environment.

Middleton says he’s prepared, having experienced a taste of that last life last summer while playing for Team USA. But as he and the Bucks prepare to relocate, making the most of the family time he has is as essential as any conditioning or shooting drills.

“I have a young daughter that’s growing up, who I’m gonna miss a lot when I’m gone,” Middleton said. “So to try to spend all those moments with her. You know, feed her breakfast, the dinners, bath time, stuff like that. Those are the things that I look forward to now because I know I won’t get the chance and I will miss it when I’m eventually in Orlando.”

Middleton is confident the Bucks can do just that and, more importantly, finish what they started.

“This is this is something that we got to deal with and try to figure out on the fly,” Middleton said. “The team that can pull it together the fastest or the quickest will probably have the best shot.”

COVID-19 will dramatically alter how reporters cover sports, and that extends well beyond local announcers often calling games from a studio instead of a stadium.

"I've heard a lot of people say that there's going to be, like, a star next to this championship," Milwaukee forward and reigning NBA MVP Giannis Antetokounmpo said. "I feel like at the end of the day this is going to be like the toughest championship you could ever win because the circumstances are really, really tough right now."

10 things to know about NBA return

The NBA season will resume on July 30 at Disney's ESPN Wide World of Sports complex in Florida. Here are 10 things to know about the restarted season.

COVID-19 concerns rising as NBA, players sign off on final details for restart of season

Acknowledging that no option would have been risk-free during a pandemic, NBA Commissioner Adam Silver said Friday that the concern shared by the league and its players surrounding next month's restart of the season is rising as COVID-19 coronavirus cases in Florida keep climbing.

The Milwaukee Bucks will open against the Boston Celtics on July 31 at 5:30 p.m. in the restart of the 2019-20 season disrupted by the COVID-19 pandemic.

Bucks, Lakers will look to shed rust, stay healthy in sprint before playoffs as NBA resumes

While other teams will be fighting for a postseason berth or playoff seedings when they play the final eight regular season games in Florida, the Lakers and Bucks will be looking to shake off the rust.

They won't reopen prior to leaving for Florida on Thursday and there was no immediate word if any specific players or staff may have tested positive.

If NBA can pull off restart, trio of young stars will get their chance at spotlight

While the resumption of action will reunite fans with familiar faces, it also will showcase a trio of young players all fighting to make their postseason debuts from inside the NBA's bubble in Orlando, Florida.

Milwaukee, which closed its downtown facility Sunday when an unidentified member of the organization tested positive for the coronavirus, heads to Orlando later this week in preparation for the season restart.

Bucks GM Jon Horst isn't concerned that the tight quarters in Orlando will lead to tampering with Giannis Antetokounmpo.

Full-scale practices inside the NBA bubble at the Disney complex started Thursday, with the Magic — the first team to get into the campus earlier this week — becoming the first team formally back on the floor.

Giannis, Bucks look to finish the job this season

The Bucks (53-12) bring the NBA's best record into the resumption of the season next week at Walt Disney World.

Guards Eric Bledsoe and Pat Connaughton have cleared the NBA's COVID-19 protocol and are with the team in Orlando but will not play Friday night against Boston, coach Mike Budenholzer said.

Bucks' Khris Middleton scored in double figures in all but one of his 55 games this season before the NBA shut down due to the coronavirus.