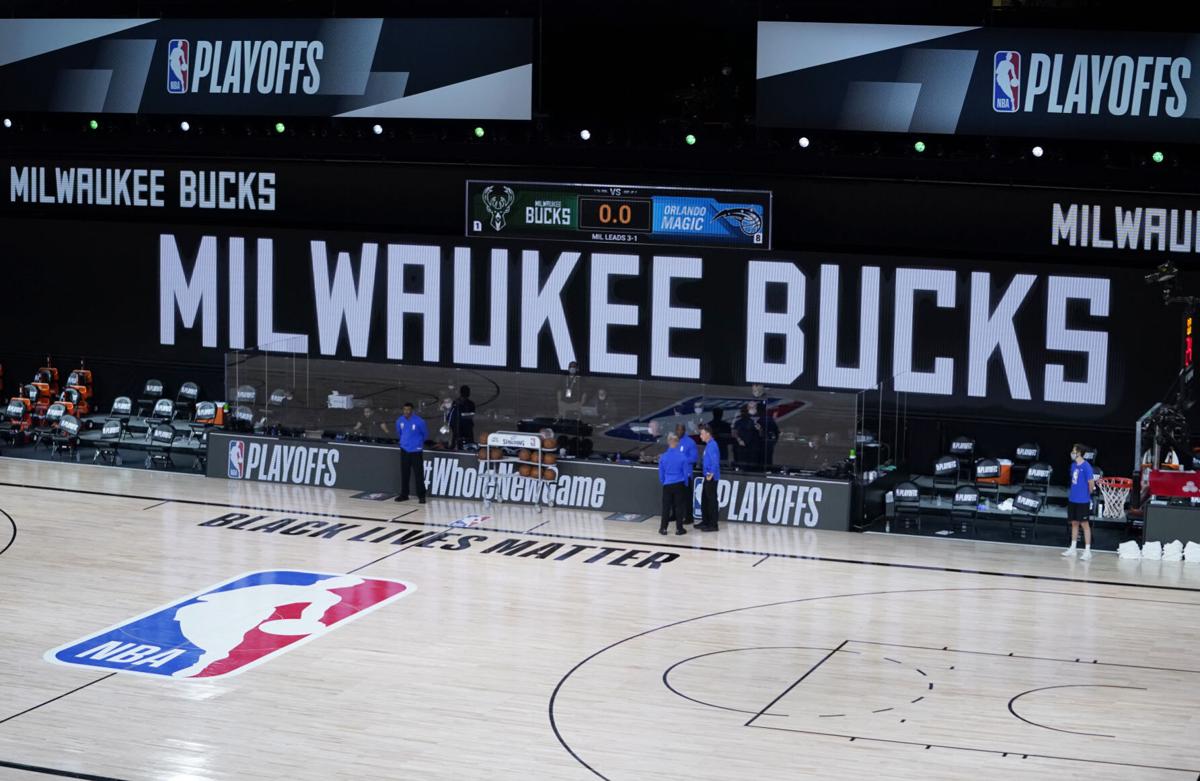 Officials stand beside an empty court before the scheduled start of Wednesday's playoff game between the Milwaukee Bucks and Orlando Magic in Lake Buena Vista, Fla. 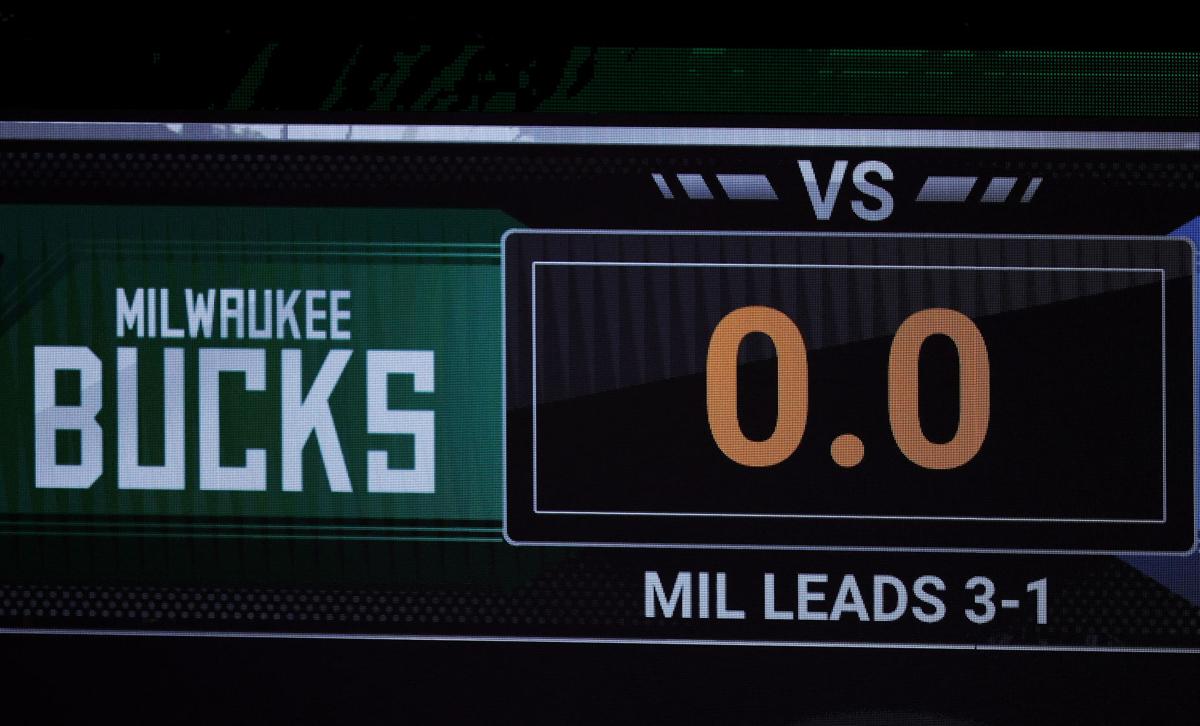 The game clock sits at 0.0 after Wednesday's scheduled start time of the Milwaukee Bucks' playoff game against the Orlando Magic in Lake Buena Vista, Fla.

LAKE BUENA VISTA, Fla. — Making their strongest statement yet in the fight against racial injustice, players from six NBA teams decided not to play postseason games on Wednesday in a boycott that quickly reverberated across other professional leagues.

Also called off: Some games in Major League Baseball, Major League Soccer and the three WNBA contests, as players across four leagues decided the best way to use their platform and demand change was to literally step off the playing surface.

Players made the extraordinary decisions to protest the shooting by police in Kenosha, Wisconsin on Sunday of Jacob Blake, a Black man, apparently in the back while three of his children looked on.

Kenosha is about 40 miles south of Milwaukee. That city's NBA team, the Bucks, started the boycotts Wednesday by refusing to emerge from their locker room to play a playoff game against the Orlando Magic.

"There has been no action, so our focus today cannot be on basketball," said Bucks guard Sterling Brown, who joined teammate George Hill in reading a statement on the team's behalf. Brown has a federal lawsuit pending against the city of Milwaukee alleging he was targeted because he was Black and that his civil rights were violated in January 2018 when officers used a stun gun on him after a parking violation.

Other games that were not played: NBA playoff games between Oklahoma City and Houston, and the Los Angeles Lakers and Portland along with three WNBA games, three MLB games and five MLS matches. Two members of the St. Louis Cardinals sat out their team's game with the Kansas City Royals as well.

The NBA's board of governors have called a meeting on Thursday to discuss the new developments, said a person with knowledge of the situation. The person spoke to The Associated Press on condition of anonymity because the meeting plan was not revealed publicly.

"The baseless shootings of Jacob Blake and other black men and women by law enforcement underscores the need for action," the NBA Coaches Association said in a statement. "Not after the playoffs, not in the future, but now."

The statement by the Bucks also called for state lawmakers to reconvene and take immediate action "to address issues of police accountability, brutality, and criminal justice reform."

The NBA did not say when Wednesday's games would be played or if Thursday's schedule of three more games involving six other teams would be affected. NBA players and coaches met for nearly three hours Wednesday night to determine next steps, including whether the season should continue. They did not come to a consensus, a person with knowledge of the meeting told AP.

"We fully support our players and the decision they made," Bucks owners Marc Lasry, Wes Edens and Jamie Dinan said in a joint statement after Milwaukee players decided to not take the floor. "Although we did not know beforehand, we would have wholeheartedly agreed with them. The only way to bring about change is to shine a light on the racial injustices that are happening in front of us."

Added Jeanie Buss, the Governor of the Lakers, in a tweet: "I stand behind our players, today and always. After more than 400 years of cruelty, racism and injustice, we all need to work together to say enough is enough."

Several NBA players, including the Lakers' LeBron James, tweeted out messages demanding change. Some teams did the same.

"We weren't given advanced notice about the decision but we are happy to stand in solidarity with Milwaukee, Jacob, and the entire NBA community," Orlando guard Michael Carter-Williams said. "Change is coming."

Magic players and referees were on the court as if the game was happening, unaware that Milwaukee did not intend to take the floor. The National Basketball Referees Association said it "stands in solidarity" with the players.

"Players have, once again, made it clear - they will not be silent on this issue," National Basketball Players Association Executive Director Michele Roberts said. The NBPA is expected to be part of Thursday's meeting with the board of governors.

Demanding societal change and ending racial injustice has been a major part of the NBA's restart at Walt Disney World. The phrase "Black Lives Matter" is painted on the arena courts, players are wearing messages urging change on their jerseys and coaches are donning pins demanding racial justice as well.

Many players wrestled for weeks about whether it was even right to play, fearing that a return to games would take attention off the deaths of, among others, Breonna Taylor and George Floyd in recent months.

Taylor, a 26-year-old Black woman, was fatally shot when police officers burst into her Louisville, Kentucky apartment using a no-knock warrant during a narcotics investigation on March 13. The warrant was in connection with a suspect who did not live there and no drugs were found. Then on May 25, Floyd died after a white Minneapolis police officer pressed a knee into the Black man's neck for nearly eight minutes - all captured on a cell phone video.

Hill said after Blake's shooting that he felt players shouldn't have come to Disney.

Players from Boston and Toronto met Tuesday to discuss boycotting Game 1 of their Eastern Conference semifinal series, which had been scheduled for Thursday. NBPA officers were part of those meetings, and Miami forward Andre Iguodala - one of those officers- said around 2:15 p.m. that he did not believe a boycott plan had been finalized.

"When you talk about boycotting a game, everyone's antenna goes up," Iguodala said. "It's sad you have to make threats like that - I wouldn't say threats - but you have to be willing to sacrifice corporate money for people to realize there's a big problem out there."

Professional sports has seen both strikes and lockouts in the past, almost always over salary disputes. But this wouldn't seem to classify as a strike, even though it was initiated by players, since their dispute is not with the NBA. Boycott, meanwhile, is defined as the act of refusing to engage in an action, usually to express disapproval with some condition.

Bucks guard Sterling Brown and the Milwaukee city attorney have agreed to a revised $750,000 settlement of a lawsuit Brown filed after getting taken to the ground, shocked with a Taser and arrested during an encounter with police in 2018.

Antetokounmpo is the first Bucks player to win the award since 1984, when Sidney Moncrief earned the honor for a second consecutive season.

A few hundred demonstrators gathered in Downtown on the fourth night since a Kenosha police officer shot Jacob Blake, intensifying demands for racial justice during a summer of unrest.

More games halted in protests over racial injustice, but NBA will finish season

NBA players considered not playing again the rest of the postseason and going home to their communities, though they decided Thursday they wanted to continue, according to a person with knowledge of the details.

How LeBron James and NBA players decided to continue playing

"LeBron's emotions got the best of him yesterday and today he calmed down," a person familiar with the meetings said. "He talked to a lot of different people. Yeah, he changed his mind about playing, but he was always for what everyone else wanted to do, whatever the majority was."

Teams returned to the court on Friday after the NBA and the National Basketball Players Association agreed on commitments that made players comfortable continuing.

Back to work: Bucks, Lakers again try to get to second round

The NBA playoffs — which stopped for three days after the Bucks refused to take the floor on Wednesday in protest of the shooting by police of Jacob Blake, a Black man, in Kenosha, Wisconsin this past weekend — are set to resume.

Heat pose true challenge for Bucks in second round of playoffs

Miami won two of the three regular-season meetings with Milwaukee, making the Heat the only team to beat the Bucks multiple times this season.

Jimmy Butler has no interest in Heat being popular underdog pick vs. Bucks

Jimmy Butler said Sunday that the Miami Heat emerging as a popular upset pick in the Eastern Conference semifinals against the Milwaukee Bucks is of little interest or concern.

Jimmy Butler made two free throws with no time remaining and the Miami Heat wasted a six-point lead in the final seconds yet found a way to beat the Milwaukee Bucks 116-114 on Wednesday night for a 2-0 lead in the Eastern Conference semifinal series.

On the ropes: Bucks on brink of elimination after Heat storm from behind with red-hot fourth quarter

The Heat outscored the Bucks 40-13 in the fourth quarter — the biggest such final-quarter margin in NBA playoff history — to take a 3-0 series lead.

Photos: Heat crush Bucks in fourth quarter to move within one win of advancing

Despite leading by 12 points entering the fourth quarter, the Milwaukee Bucks couldn't hang on for their first win of the series as the Miami …

Even with Giannis Antetokounmpo missing most of the game with a sprained right ankle, the Bucks extended their season to a Game 5 on Tuesday by defeating the Miami Heat 118-115 in overtime Sunday.

Despite losing Giannis Antetokounmpo to an ankle injury in the first half, the Milwaukee Bucks kept their season alive with a 118-115 overtime…

Officials stand beside an empty court before the scheduled start of Wednesday's playoff game between the Milwaukee Bucks and Orlando Magic in Lake Buena Vista, Fla.

The game clock sits at 0.0 after Wednesday's scheduled start time of the Milwaukee Bucks' playoff game against the Orlando Magic in Lake Buena Vista, Fla. 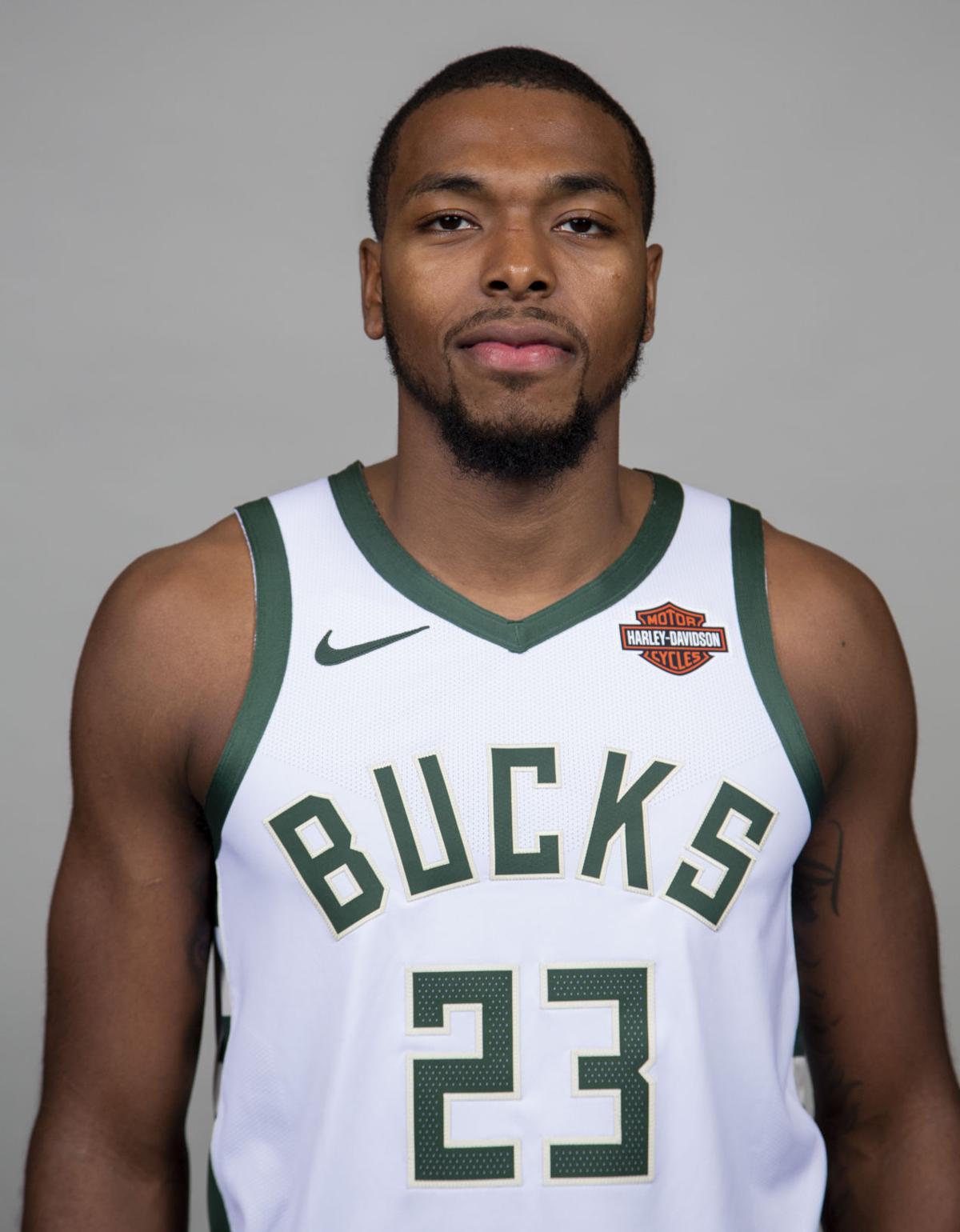