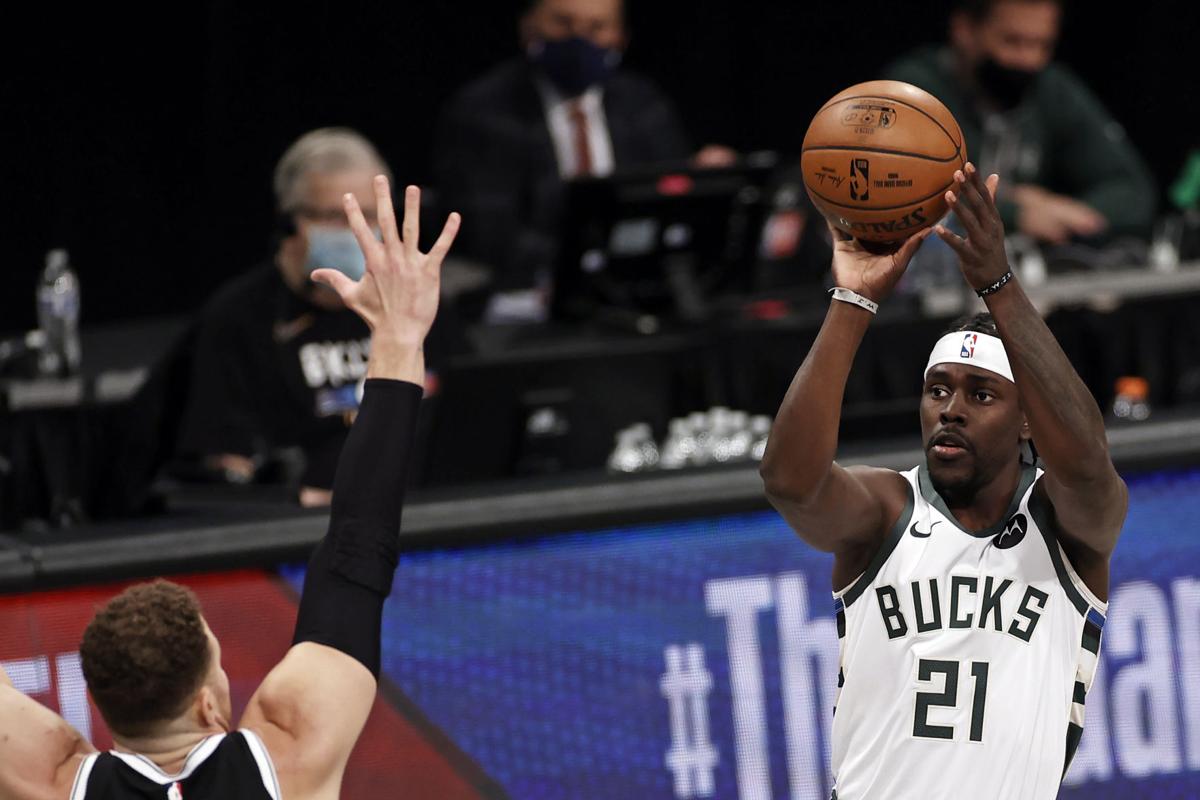 Bucks' Jrue Holiday scored 17 points on 7-for-19 shooting against the Nets on Saturday night. 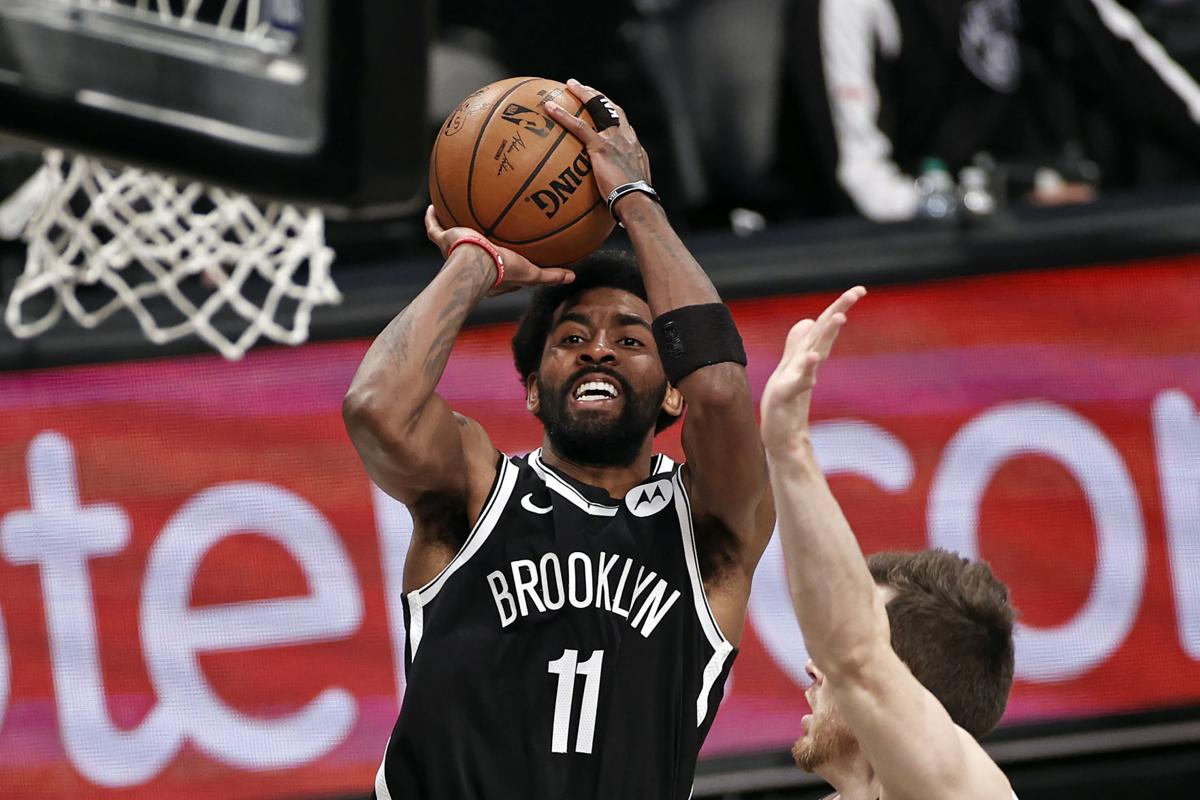 NEW YORK — James Harden won’t be back for Game 2 of the Eastern Conference semifinals. The Milwaukee Bucks believe their shooting touch will.

So the Bucks have plenty of reasons for optimism heading into the game Monday night. Yet there’s also still plenty of cause for concern.

Kevin Durant and Kyrie Irving are still out there for the Brooklyn Nets, who spent all season working around injuries and proved another point about themselves after shaking off Harden’s loss 43 seconds into Game 1.

“That we have the capability of rising to the occasion,” Irving said. “We’re a very mature basketball club because we play selfless and we trust each other, so in any situation in a game I feel like we have the talent, we have the preparation, we have the coaching staff to be able to go out and execute.”

The Nets ruled Harden out for Game 2 because of right hamstring tightness. Coach Steve Nash said Harden’s recent trouble with the hamstring, which caused him to miss 20 of 21 games late in the season, made his availability for the remainder of the series difficult to gauge.

“For James, we obviously are desperate for him to return and he’s a huge piece of what we do on our team, but at this point I think it would be all guesswork to really understand,” Nash said. “He’s had such a little up-and-down recent history with it that it’s really hard to predict, so let’s hope for the best.”

The opener of the East series between the Nos. 2 and 3 seeds was the first loss of the postseason for the Bucks. After making a franchise-record 14.4 3-pointers per game during the season, they also struggled from the perimeter in Game 1 of the first round against Miami before winning in overtime. But they knew then they could rely on their defense to hang in until the NBA’s highest-scoring offense came around.

“But the talent level wasn’t the same,” Giannis Antetokounmpo said. “Now we’re playing against Kyrie, KD, Joe Harris, one of the best shooters in the league, so it’s a little bit different.

“It’s a little bit more hard, but at the end of the day we love the challenge. We’re going to stay together, we’re going to play together and hopefully we can give ourselves a chance to win Game 2.”

That will be much easier if Khris Middleton and Jrue Holiday shoot better. Middleton was 6-for-23, Holiday 7-for-19, and they combined to go 2-for-12 behind the arc.

The Bucks have significant size advantages up front. They had big margins in points in the paint (72-48) and second-chance points (20-4), with Antetokounmpo and Brook Lopez combining to shoot 24-for-35.

“But when it comes to kind of the guards and myself, I’ve got to finish better,” Holiday said. “There was a couple of them in there that I should have made and I didn’t and next game we’ll turn that around.”

After unprecedented stability for this team, the Nets will have to use a new lineup for the first time this postseason. They used a franchise-record 38 different starting lineups during the regular season before going with their Big Three plus Harris and Blake Griffin for all six games. That was the most consecutive starts for any unit this season and made that already the second-most used starting five this season.

After having Durant, Harden and Irving play together only eight times during the season, Nash was hopeful for a good stretch of health.

“I think I was there prior to last night but that’s just not our reality,” he said, “and so you have to accept it and you have to enjoy the opportunity we have regardless of the adversity we that face.”

Brooklyn never had its three stars together against Milwaukee. Irving missed the Nets' 125-123 home victory on Jan. 18 in their second game after acquiring Harden from Houston. Durant and Harden (above), who have combined for two MVP awards and seven scoring titles, put up 64 points that night.

THE SHOW GOES ON

The Bucks have already lost starting guard Donte DiVincenzo (above) for the playoffs after he tore a ligament in his left ankle during Game 3. But Nash said versatile forward Jeff Green is improving from a left foot injury that sidelined him the final three games of the first round.

"We've said it since the injury happened, we've got to move forward, we've got to step up," Bucks coach Mike Budenholzer said Friday. "Everybody's just got to continue to be themselves; execute, defend and compete, which is a lot of things Donte does well."

Bucks center Brook Lopez (above) will be back in Barclays Center, having played for the Nets in Brooklyn and New Jersey. He scored the most points in franchise history.

“I think I’m excited to go back and play in Brooklyn, play on that court again in Barclays, but obviously we’re going to be pretty focused once tipoff comes,” he said.

Bryn Forbes (above) averaged 18.3 points and shot 16 of 30 from 3-point range during the final three games of the Bucks’ first-round sweep of Miami. He was a combined 7 of 12 from beyond the arc in the Bucks' two-game sweep of the Nets in May.

BUCKS ON THE BOARDS

Milwaukee had a double-digit rebounding edge in each game against Miami and dominated the glass by a margin of 16.8 boards per game. The Bucks' size advantage may make Nash consider reinserting former starting center DeAndre Jordan (above) into the rotation.

Four Bucks scored 20 or more points, led by Brook Lopez with 25 as Milwaukee routed Miami 120-103 to sweep the series.

The Bucks went 2-1 against the Nets during the regular season, but Kevin Durant, Kyrie Irving and James Harden didn't play together for Brooklyn during any of those games.

Roster transformation by Bucks pays off with sweep of Heat

Some of Milwaukee's new additions for this season — Jrue Holiday, Bryn Forbes and Bobby Portis in particular — played huge roles for the Bucks in their first-round sweep of the Heat.

Nuggets big man Nikola Jokic was revealed Tuesday as the NBA's Most Valuable Player for 2020-21, making him by far the lowest draft pick ever to win the award.

Bucks' Jrue Holiday scored 17 points on 7-for-19 shooting against the Nets on Saturday night.