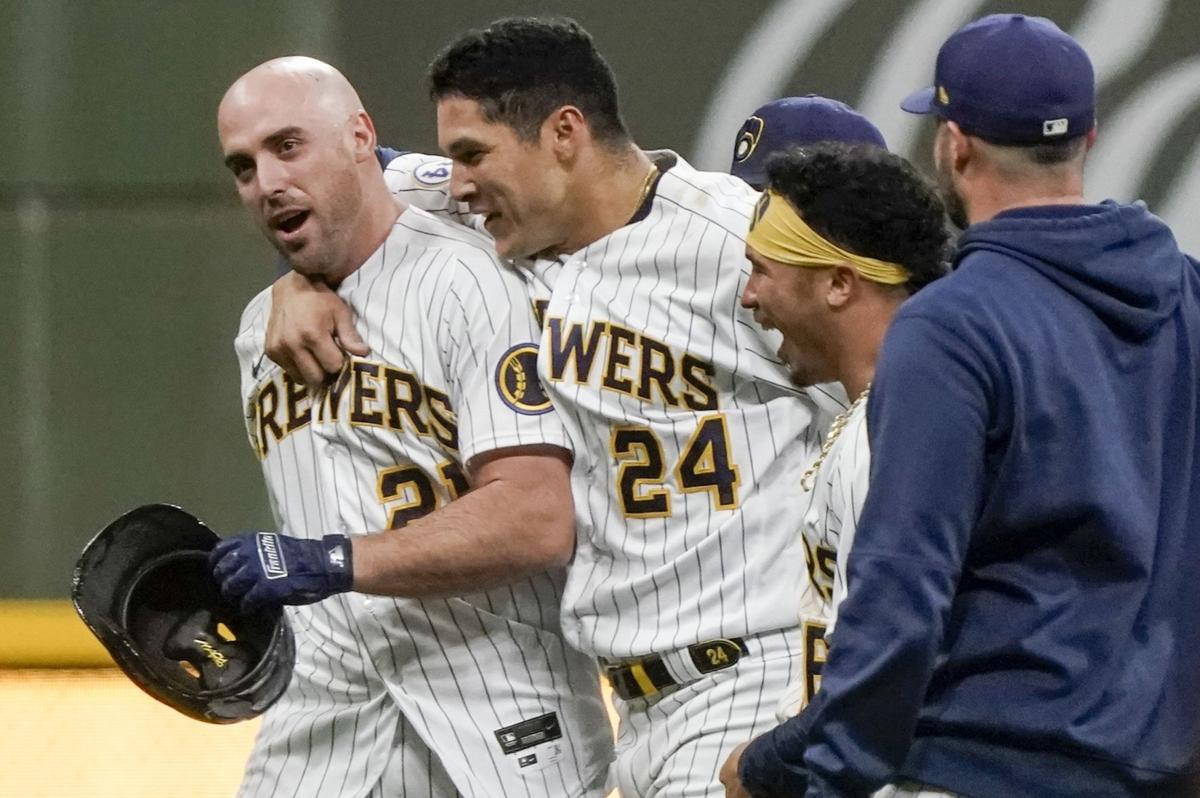 Brewers' Travis Shaw, left, is congratulated after hitting the game-winning single in the 11th inning against the Dodgers on Saturday night in Milwaukee.

MILWAUKEE — Travis Shaw homered and hit a game-winning single, and the Milwaukee Brewers scored three runs in the 11th inning to beat the scuffling Los Angeles Dodgers 6-5 on Saturday night.

Los Angeles, which has dropped three straight to Milwaukee, also lost starter Dustin May to an apparent injury after he had thrown just 27 pitches.

The game was tied at 2 after nine innings and 3-all after 10.

In the 11th, Drew Smith, who entered Saturday batting .222, hit a two-run triple off Drew Rasmussen to give the Dodgers a 5-3 lead.

But Milwaukee, despite having the lowest team batting average (.215) in the NL entering Saturday and having 16 players on the injured list, responded.

The Brewers loaded the bases with no outs after left-hander Alex Vesia (0-1), who was recalled Saturday, started the inning with two walks. He was replaced by right-hander Mitch White, who had pitched 3⅔ innings this season. White gave up a sacrifice fly to Kolten Wong, an RBI single to Avisail Garcia and the game-winning hit to Shaw, which scored Mario Feliciano, who made his major league debut. Feliciano had walked.

Shaw also hit a solo homer earlier in the game.

Left-hander Angel Perdomo (1-0) got the win.

The teams entered the game on divergent paths. Milwaukee ended April 8-3 and Los Angeles 3-8, with the Brewers winning the first two games of their four-game series. Milwaukee pitching held the Dodgers to one run in both games.

Mookie Betts, who was 7-for-36 (.194) in his previous eight games, led off the game with a home run against Brandon Woodruff. It was his first since April 13. Betts gave Los Angeles a 2-1 lead in the third, reaching on a hit by pitch and scoring on Corey Seager’s triple.

The Dodgers reached base in each of the six innings Woodruff pitched, but the 2019 NL All-Star, who has gone six or more innings in five of his six starts, kept them at bay. In the fifth, with the game tied at 2, one out and two runners on, Woodruff struck out Seager and Turner.

Milwaukee’s pitching has been strong. Entering Saturday, three of the 12 pitchers with the lowest ERA in the NL were Woodruff and two other Milwaukee starters, Freddy Peralta and Corbin Burnes, who went on the IL on Thursday.

Luis Urías homered in the second inning off May, who then faced Billy McKinney. After the 23-year-old right-hander threw a fastball to make the count 3-2, he motioned to the Dodgers' dugout for help and was removed from the game moments later.

Reaching 100 mph, May threw 27 pitches, 20 for strikes. He had pitched six innings in his previous start, against the Padres, giving up one run and two hits while striking out 10.

The four-game series ends with LHP Julio Urías (3-0, 3.23 ERA) starting for Los Angeles. He has pitched seven innings twice, including April 20 at Seattle, where he gave up no runs and one hit, and struck out 11. Milwaukee did not announce a starter before Saturday’s game.

After taking the first two games of a four-game set with the defending World Series champion Dodgers, the Brewers climbed back from deficits f…

Milwaukee starter Alec Bettinger gave up 11 runs on 11 hits in a 16-4 loss to the Dodgers on Sunday at American Family Field.

Trailing 6-1, Milwaukee scored four runs in the seventh but come up short in a second straight loss in Philadelphia.

Brewers' Christian Yelich's back puts him back on injured list, 1 day after returning

The Brewers announced Tuesday that Christian Yelich was returning to the IL due to the lower back strain that has bothered the 2018 NL MVP for the last three weeks.

Brewers' Travis Shaw, left, is congratulated after hitting the game-winning single in the 11th inning against the Dodgers on Saturday night in Milwaukee.