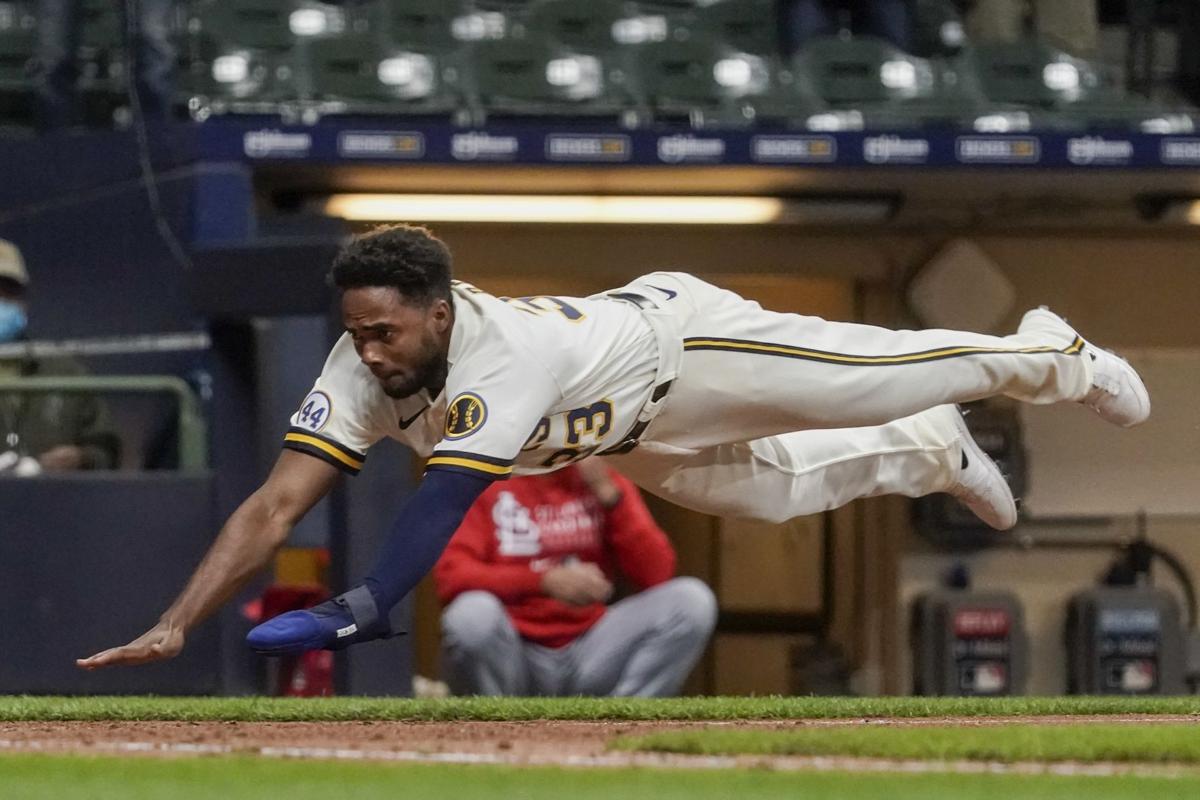 Brewers' Pablo Reyes scores the tiebreaking run during the eighth inning Wednesday. Reyes came around from first on a double by Travis Shaw. 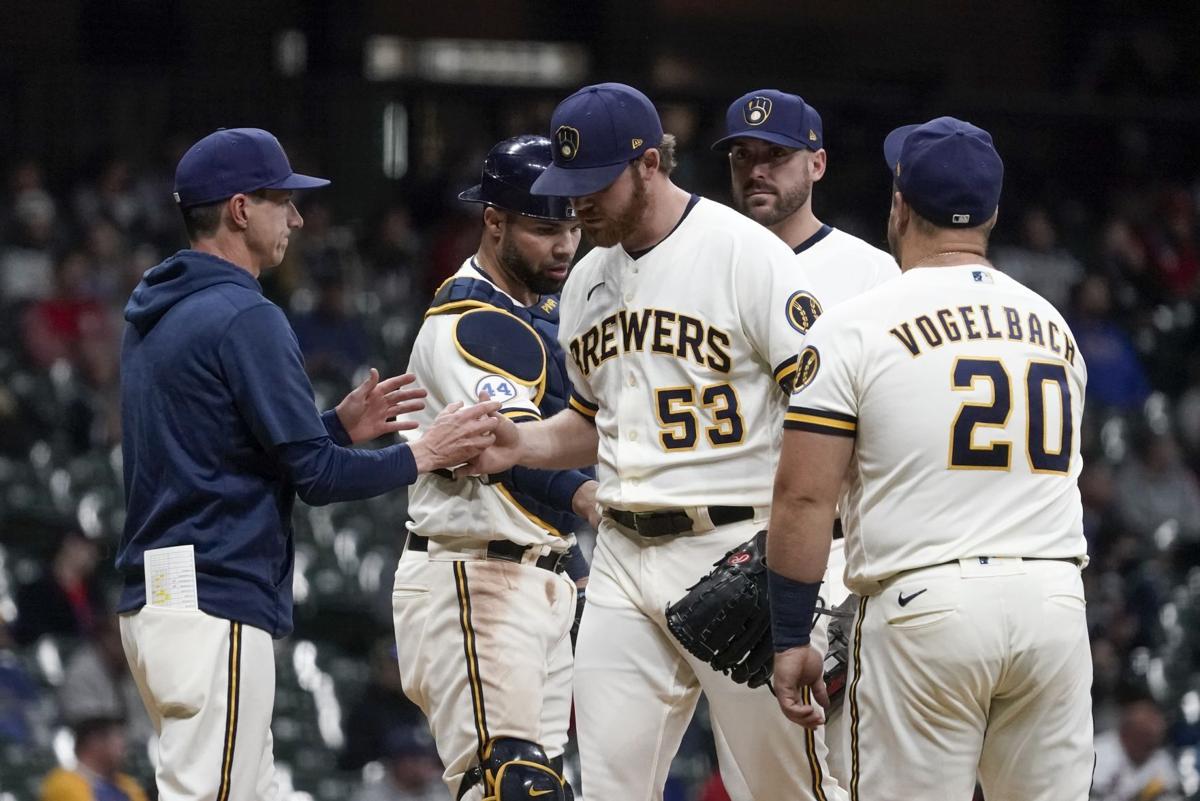 Brandon Woodruff hands the ball to Brewers manager Craig Counsell after striking out 10 in 7⅔ innings. The right-hander lowered is ERA to 1.64.

MILWAUKEE — The Milwaukee Brewers were on the verge of going down in order in the eighth when a stroke of luck kept the inning going.

Given new life, the Brewers broke out of their collective hitting slump and snapped the St. Louis Cardinals’ four-game winning streak.

Travis Shaw hit a tiebreaking double and Avisaíl García added a two-run homer in the eighth as the Brewers defeated the Cardinals 4-1 on Wednesday night. That outburst was possible only because a wild pitch foiled Ryan Helsley’s apparent inning-ending strikeout of Daniel Vogelbach.

“The rally started in a pretty strange way with the strikeout and just getting a base,” Brewers manager Craig Counsell said. “That was probably the big break. Then we put two great swings on baseballs — drove a ball in the gap and hit a ball over the fence. That was the good stuff.”

After Vogelbach reached first, Shaw hit a double to right center off Helsley (3-1) that brought home pinch runner Pablo Reyes. García capped the outburst with a towering homer to left-center that was projected at 442 feet.

The Brewers gained a measure of revenge after losing 6-1 to the NL Central-leading Cardinals in 11 innings a night earlier. The Cardinals came from behind to win Tuesday despite getting just two hits in the first 10 innings.

“It seems like any time we play them, it’s always close like this,” Shaw said. “There’s going to be some back and forth. We’re going to have nights that get away from us like last night. And then we’re going to have our nights like we had tonight.”

The Cardinals had tied the game in the top of the eighth on Tyler O’Neill’s homer to right off Brandon Woodruff, who struck out 10 and gave up just three hits and one walk in 7⅔ splendid innings.

Woodruff, who has a 1.19 ERA over his past seven starts, carried a no-hitter into the sixth.

Devin Williams (1-0) retired Tommy Edman on a grounder with a runner on first to make sure the Cardinals did no more damage in the eighth.

The Cardinals brought the potential tying run to the plate with one out in the ninth after Paul Goldschmidt doubled and Nolan Arenado walked, but Josh Hader retired Edmundo Sosa on a fielder’s choice and struck out Yadier Molina to earn his eighth save.

Milwaukee’s eighth-inning rally was a fitting climax on a night when the Brewers found creative ways to score runs. That was most apparent in the sixth inning as Milwaukee broke a scoreless tie.

With runners on first and second, Shaw greeted reliever Genesis Cabrera with a deep fly to center. Center fielder Harrison Bader fell down, but somehow managed to make the catch while on his side in the warning track dirt.

“The grass, sod or whatever you say, right where it meets the track, just totally gave out,” Bader said. “Pretty frustrating, yeah.”

As Bader tried to get the ball out of his glove, the ball instead rolled past him and headed toward the wall, forcing him to go back to retrieve it.

Lorenzo Cain took off from second and came all the way home as his headfirst slide easily beat the throw to the plate. The play was scored a flyout with Cain coming home on Bader’s error.

“Lorenzo, on the bases, he sees everything,” Counsell said. “He really does.”

Brewers ace Corbin Burnes says he tested positive for the coronavirus last month but remained asymptomatic throughout his stint on the injured list.

Burnes is expected to start Thursday against the St. Louis Cardinals in his first appearance since April 26. He is 2-2 with a 1.53 ERA, 49 strikeouts and no walks in 29 1/3 innings.

Although the Brewers are among the major league teams that had some protocols relaxed after reaching an 85% vaccination rate, Burnes said Wednesday he opted against getting vaccinated for personal reasons.

Burnes said he had "no clue" how he might have gotten the virus and initially believed it was a false positive.

"So we did all the subsequent testing after, and it came back that it was an actual positive," Burnes said. "We were fortunate enough that throughout the contact tracing and everything else that no one else was forced to miss time and no one else tested positive. So as far as that front goes, it was successful."

Burnes said he has no concern about whether he could pick up where he left off after missing a couple of starts.

He has an opportunity on Thursday to break the Major League Baseball record for most strikeouts to start a season without allowing a walk. Los Angeles Dodgers reliver Kenley Jansen punched out 51 batters in 2017 before issuing his first free pass.

"My goal always as a pitcher is to go out there and to minimize how many guys you put on base," Burnes said. "For me this year, I've done a really good job of making guys earn it, to try to hit good pitches to get on base and earn their way on, and obviously I'm not going to be able to not walk anybody all year.

"At some point, it's going to happen. But for me, it's just going out there and trying to minimize the number of unexecuted pitches and make guys earn it to get on base."

Burnes allowed just one run in his first four appearances before giving up five runs — four earned — over five innings in an 8-0 loss to Miami on April 26. Opponents are batting .152 against him.

Although he had to be away from the team for 10 days due to his positive test, Burnes said he was able to continue his own workouts since he was asymptomatic.

"There's a little grass field right outside our apartment complex and I had a net. I was fortunate to have some balls and stuff with me from the offseason, so I was able to throw into a net every day and do everything in my power to keep the arm, to keep the body ready."

García returned to the starting lineup for the first time since Saturday after dealing with a back issue. He made pinch-hitting appearances Sunday and Tuesday.

Tyrone Taylor delivers a two-out, tiebreaking single as Milwaukee caps its road trip with a 2-5 record.

Isan Diaz, who was sent to Miami in the Christian Yelich trade, hit a grand slam to help the Marlins defeat Milwaukee 6-1 on Friday night.

St. Louis scores in the first and ninth innings in a 2-0 victory.

Milwaukee finishes with three hits and loses third consecutive game to fall to .500.

Milwaukee loses almost all of an 8-0 lead before coming away with a 10-9 victory at American Family Field.

Brewers' Pablo Reyes scores the tiebreaking run during the eighth inning Wednesday. Reyes came around from first on a double by Travis Shaw.

Brandon Woodruff hands the ball to Brewers manager Craig Counsell after striking out 10 in 7⅔ innings. The right-hander lowered is ERA to 1.64.