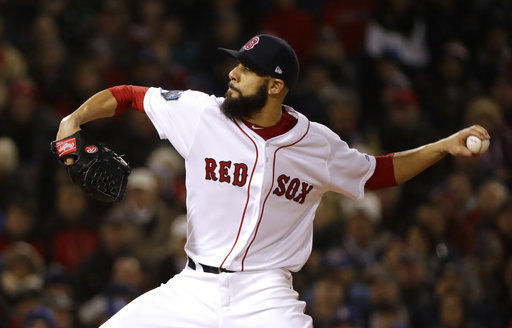 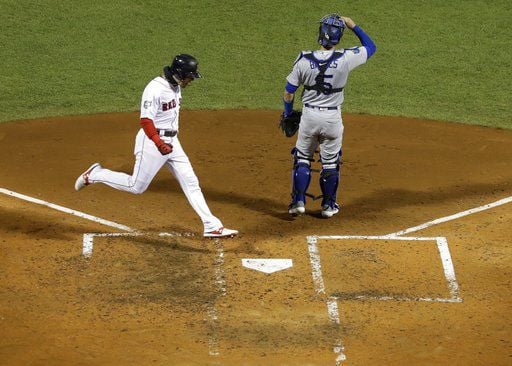 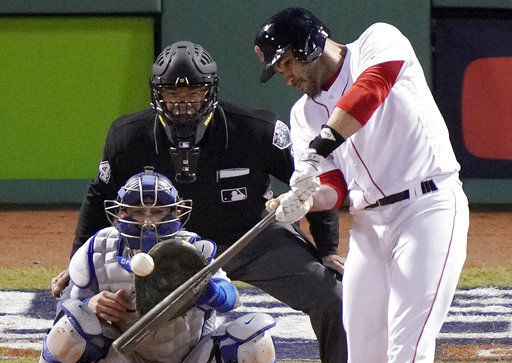 BOSTON — From playoff flop to October ace in two legacy-shifting starts, David Price earned his second postseason victory in a row and moved the Boston Red Sox halfway to yet another World Series title.

Game 3 is Friday in Los Angeles. The Dodgers need a win to avoid an 0-3 deficit that no World Series team has ever recovered from.

"This is the biggest stage in baseball," Price said after his longest postseason outing since signing a seven-year, $217 million contract to come to Boston in 2016. "To be able to do that, it feels good, for sure. I'm pumped for myself, pumped for all my teammates and coaches for us to be two wins away."

Mookie Betts had three hits for the Red Sox, who have won 14 of their last 16 World Series games dating to a four-game sweep of the St. Louis Cardinals in 2004. They have won two more championships since then, in '07 and '13.

Not bad for a team that went the previous 86 years without a title.

And Price had battled a curse of his own.

The one-time Dodgers draft pick has pitched like an ace in the regular season but was 0-9 in his first 10 postseason starts before this October. Whether with Tampa Bay, Toronto, Detroit or Boston, his team had never won a playoff game he started before this year.

But the Red Sox have now won his last three postseason starts, including the ALCS Game 5 clincher against the defending World Series champion Astros in which he pitched six shutout innings.

"I get it, the numbers and all that. But this guy is a great pitcher," Boston manager Alex Cora said. "He's been one of the best pitchers in the big leagues for a while, and he cares."

On a frigid night at Fenway Park, Price held the highest-scoring team in the NL hitless through three innings and retired the last seven batters he faced. He struggled only in the fourth, loading the bases with nobody out on two singles and a walk as the Dodgers took a 2-1 lead — their first of the Series.

"I'm so happy for him and proud of him," Martinez said. "Going through all that criticism that he's been getting here, to bounce back to what he's been doing."

And the Red Sox batters did what they've been doing: scoring with two outs.

In an uncanny stretch of clutch hitting that's been their hallmark throughout their 108-win season, the Red Sox scored all their runs in Game 2 with two outs, including a three-run rally in the fifth that only started after Hyun-Jin Ryu set down Ian Kinsler and Jackie Bradley Jr.

Christian Vazquez singled, Betts did the same and Andrew Benintendi worked the count full before walking to load the bases, chasing Ryu. Ryan Madson walked Steve Pearce to tie the game before Martinez, who had 130 RBIs in the regular season, dropped a flare in front of right fielder Yasiel Puig for a two-run single that gave Boston a 4-2 lead.

Price and three relievers retired the last 16 Los Angeles batters, with Craig Kimbrel closing out the Dodgers in the ninth for his sixth save this postseason. Not since Don Larsen's 1956 perfect game for the Yankees against the Brooklyn Dodgers has an AL team retired as many consecutive hitters to finish a World Series game, according to STATS.

"We had him. We had him on the ropes," Los Angeles manager Dave Roberts said. "The difference is they got the big hit when they needed, and we didn't."

Boston's other run came on Kinsler's two-out single in the second. The Red Sox, who led the majors in two-out runs in the regular season, have scored 36 of their 68 runs this postseason — and nine of their 12 in the Series — with two outs.

The last 10 teams to win the first two games of the World Series — and 16 of the last 17 — have gone on to win it all. And the NL West champions will need to do it against a team that has won six straight postseason games and five in a row on the road.

"We're just in the middle of the World Series," Dodgers first baseman David Freese said. "We're down 2-0, we get that. We just understand that Game 3 is a necessity, just like Game 2."

One night after getting four hits, Red Sox left fielder Andrew Benintendi made a leaping, spread-eagle catch to rob Brian Dozier of an extra-base hit leading off the fifth. With the ball tailing away from him toward the corner, Benintendi jumped, kicked and pulled it in a few feet in front of the Green Monster scoreboard.

"Me and Mookie work on our ballet a lot, especially in spring training," Benintendi said.

Dodgers center fielder Cody Bellinger may have done him one better, sliding under Martinez's long drive to make a nice grab in the eighth.

The teams head to the West Coast for Game 3 at Dodger Stadium on Friday. Rookie right-hander Walker Buehler is scheduled to pitch for Los Angeles against likely Boston starter Rick Porcello.

Have the changes brought about by analytics made baseball less appealing to casual fans?

The Boston Red Sox came out swinging, and got a solid effort from their bullpen after an expected duel between aces Chris Sale and Clayton Kershaw never developed.

Red Sox have their own history with Manny Machado's dirty play

October's villain is especially despised at Fenway Park for planting his spikes into Dustin Pedroia in April 2017. The Boston second baseman hasn't been the same since.

Back by the beach, Dodgers turn to rookie Walker Buehler as they look to get hot in World Series

While the World Series isn't quite a trip to the beach, the Boston Red Sox anticipate staying hot in balmy California, and the Los Angeles Dodgers hope a warm welcome will help them reverse a 2-0 deficit.

Muncy homered to left-center on a full-count pitch from Nathan Eovaldi, ending the longest World Series game in history early Saturday and pulling the Dodgers to 2-1 in the best-of-seven matchup.

Steve Pearce hit a tying homer in the eighth inning and a three-run double in the ninth, and the Red Sox emphatically rallied for a 9-6 victory over the Los Angeles Dodgers on Saturday.

Manny Machado's first World Series one to forget for Dodgers

Machado struggled against the Boston Red Sox in his first World Series, going 4 for 22.