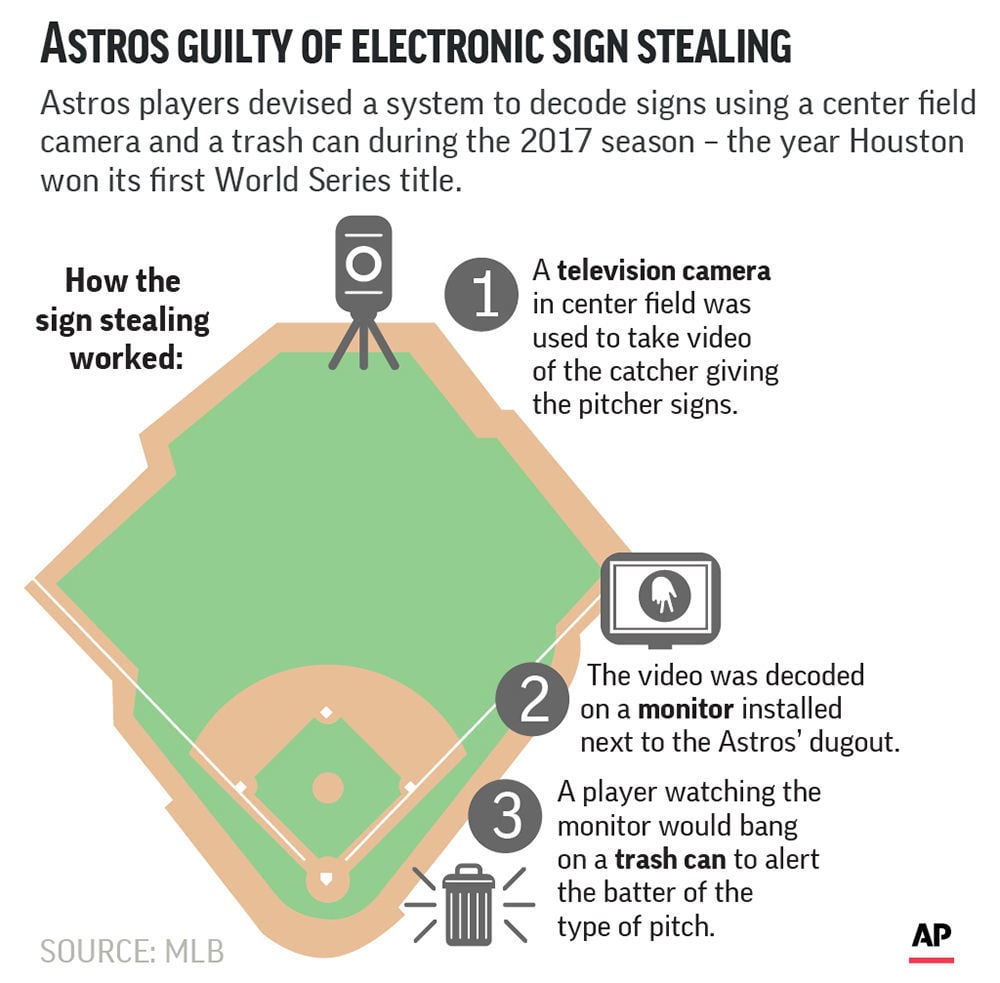 Graphic looks at how the Houston Astros used electronics for sign stealing during their run to the 2017 World Series title; 2c x 4 3/4 inches; with BC-BBA-Astros-Sign-Stealing; 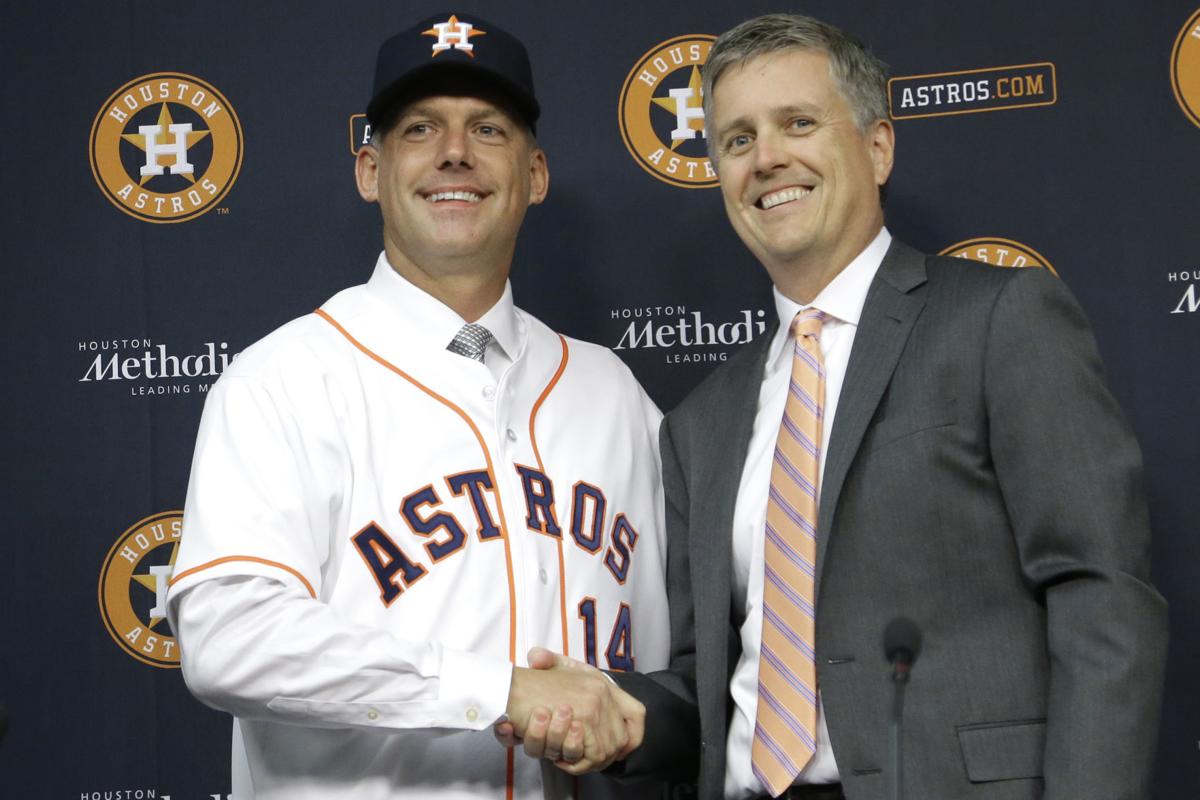 FILE - In this Sept. 29, 2014, file photo, Houston Astros general manager Jeff Luhnow, right, and A.J. Hinch pose after Hinch is introduced as the new manager of the baseball club in Houston. Hinch and Luhnow were fired Monday, Jan. 13, 2020, after being suspended for their roles in the team's extensive sign-stealing scheme from 2017. (AP Photo/Pat Sullivan, File) 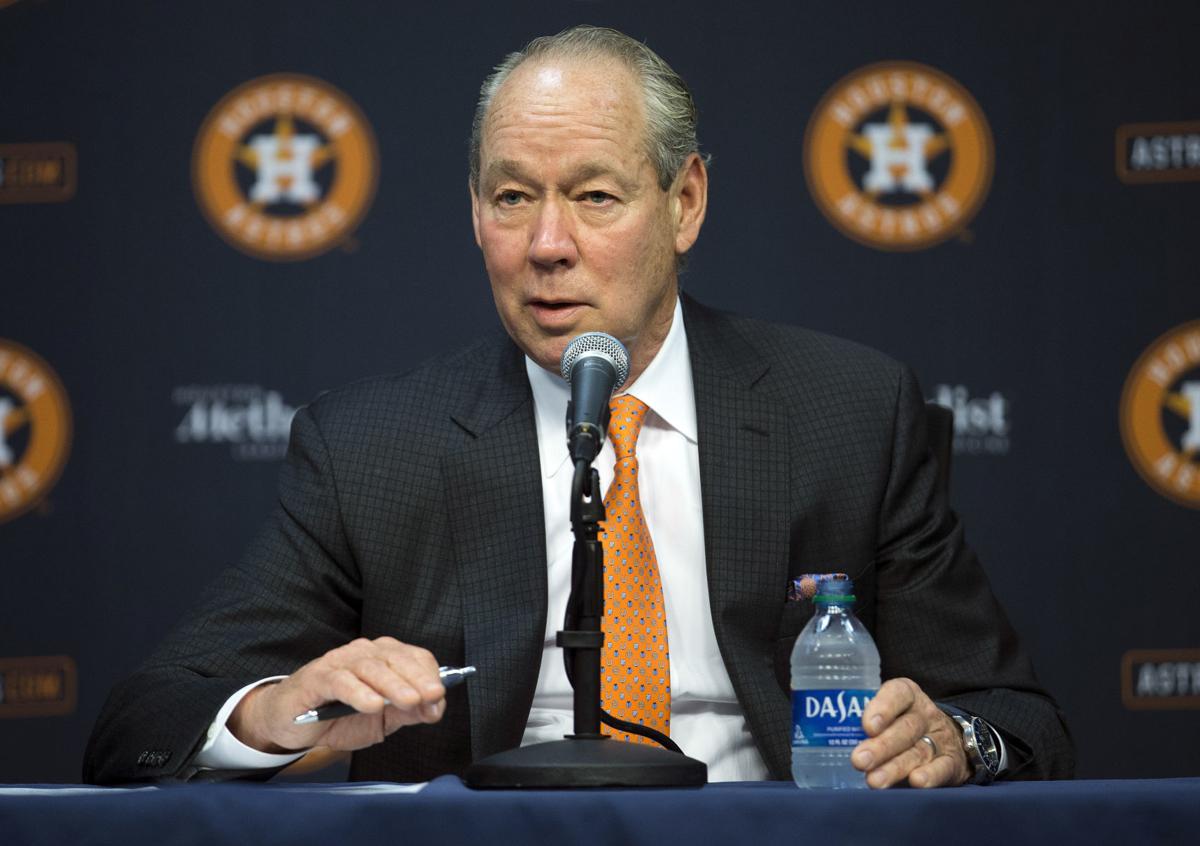 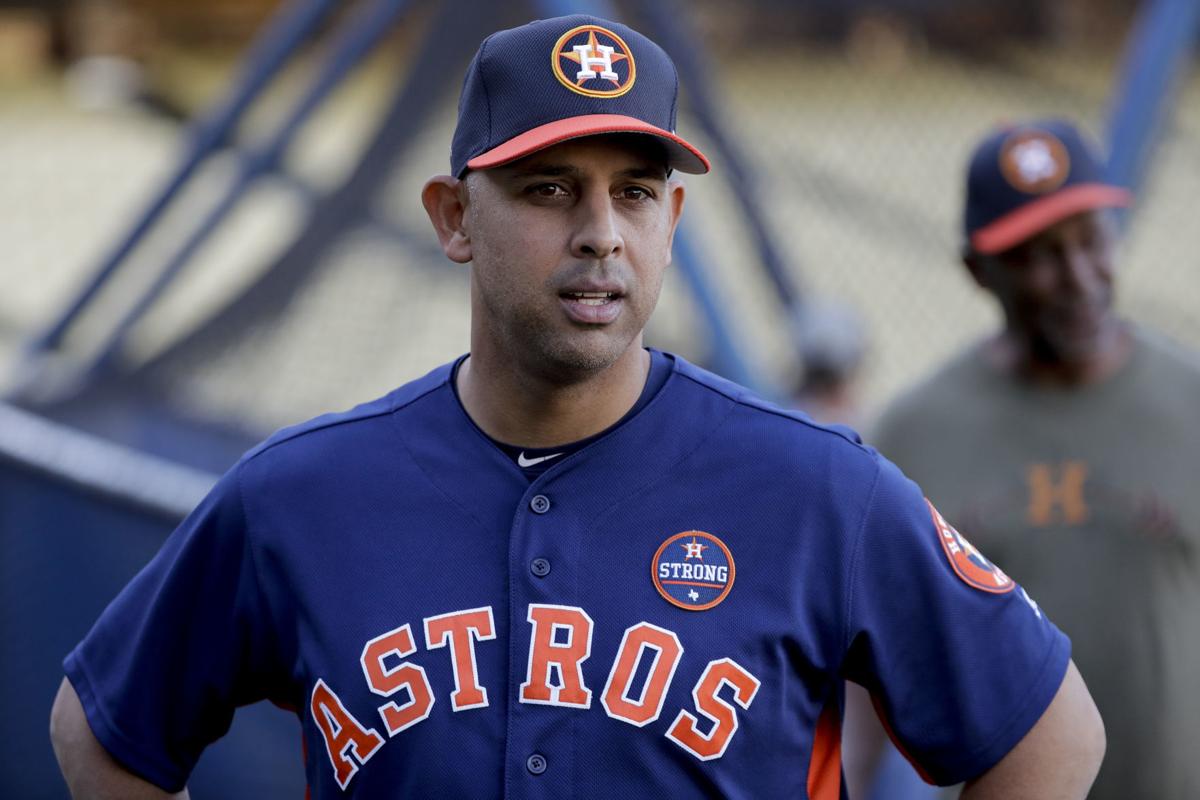 AJ Hinch won't be managing in the big leagues any time soon, if at all. Alex Cora will soon join him in the unemployment line, and it's hard to believe anyone will ever give him another job that involves being a leader of men.

The punishments — technically Cora's is still to come — fit the crime, and for that baseball commissioner Rob Manfred deserves a pat on the back. Give another one to Astros owner Jim Crane, who did his part to clean up an increasingly smelly mess in Houston by immediately firing both his manager and general manager.

But that doesn't bring real justice. It can't.

Not to the Los Angeles Dodgers, who are now at 32 years and counting without a World Series title

Not to Clayton Kershaw, whose postseason failings were magnified in game 5 at Minute Maid Park when the Dodgers ace was raked for six runs and didn't make it out of the fifth inning.

And certainly not to Yu Darvish, whose reputation — and nearly his career — got trashed when he was routed by the Astros in two games of the 2017 World Series.

Yes, the official record shows the Houston Astros are still your 2017 World Series champions and that's not going to change regardless of the outcry from Southern California.

But does anyone really believe it?

Watch the second inning of Game 3 once again and then decide. That's when Darvish was touched up for four runs and the Astros took a 2-1 lead in the series.

It was almost as if the hitters knew what was coming — which, of course, they did.

If you're still not convinced, Game 5 should be evidence enough. Like Game 3 it took place at Minute Maid Park, where the cameras were rolling, the dugout trash can was booming and the Astros bats were blazing.

All with arguably the best pitcher in baseball since the turn of the century on the mound for the Dodgers. Kershaw didn't make it out of the fifth inning, surrendering six runs in a wild game that saw the Dodgers score a dozen times — and still lose.

Kershaw, Darvish and the rest of the Dodgers were called chokers. Manager Dave Roberts was taken to task on social media for not handling his pitchers properly.

It turns out what really happened is the Astros cheated. Cora, their bench coach at the time, concocted a scheme to steal signs that made an already good team even better.

To make matters worse, they celebrated on the field at Dodger Stadium like they had earned every moment of it.

The bitter taste still lingers for both Dodger fans and players.

``We were close, but we did it the right way,'' National League MVP Cody Bellinger told ESPN before the results of MLB's investigation were released.

It didn't help that the Dodgers would make the World Series the next year, too, only to see the visiting team celebrating a championship once again at Dodger Stadium. And who was the manager jumping up and down with his players and spraying champagne with his players for the second year in a row at Chavez Ravine?

That would be Cora, who at least for the moment is still the manager of the Red Sox. Manfred didn't discipline him Monday but only because MLB is still investigating to see if Cora cheated in Boston as much as he did in Houston.

And cheat he did as the bench coach of the Astros, setting up the system that fed sign sequences to a monitor near the dugout. Manfred's investigation put Cora at the center of it all, and the guess is he will eventually be kicked out of baseball, never to return.

So now the Astros will go down in baseball infamy for being cheaters on a level never seen before. They're not quite the Black Sox of 1919 but the damage they've done to the sport is not insignificant.

Their reputation is in tatters, the feel good story of a city recovering from Hurricane Harvey obliterated. There's an asterisk attached to their championship, and no way for their fans to feel good about anything from the 2017 season.

There's also no way to make things right for the Dodgers, who were the real victims in all this. Baseball isn't about to vacate a title from three years back, and you can't claim a championship you didn't win on the field anyway, even if you were cheated.

In the end, the Dodgers never got to hold the World Series trophy. They sat and shed tears in their clubhouse after Game 7 instead of celebrating with 55,000 faithful fans.

There's one other thing they missed out on, as Darvish — who was pretty much run out of town by angry Dodger fans after the series — reminded everyone on Twitter after the news broke.

``If the Dodgers are planning a 2017 World Series parade, I would love to join!'' Darvish tweeted. ``So if that is in the works, can someone make a Yu Garbage Jersey for me?''

Tim Dahlberg is a national sports columnist for The Associated Press. Writer to him at tdahlberg@ap.org or http://twitter.com/timdahlberg

Graphic looks at how the Houston Astros used electronics for sign stealing during their run to the 2017 World Series title; 2c x 4 3/4 inches; with BC-BBA-Astros-Sign-Stealing;

FILE - In this Sept. 29, 2014, file photo, Houston Astros general manager Jeff Luhnow, right, and A.J. Hinch pose after Hinch is introduced as the new manager of the baseball club in Houston. Hinch and Luhnow were fired Monday, Jan. 13, 2020, after being suspended for their roles in the team's extensive sign-stealing scheme from 2017. (AP Photo/Pat Sullivan, File)