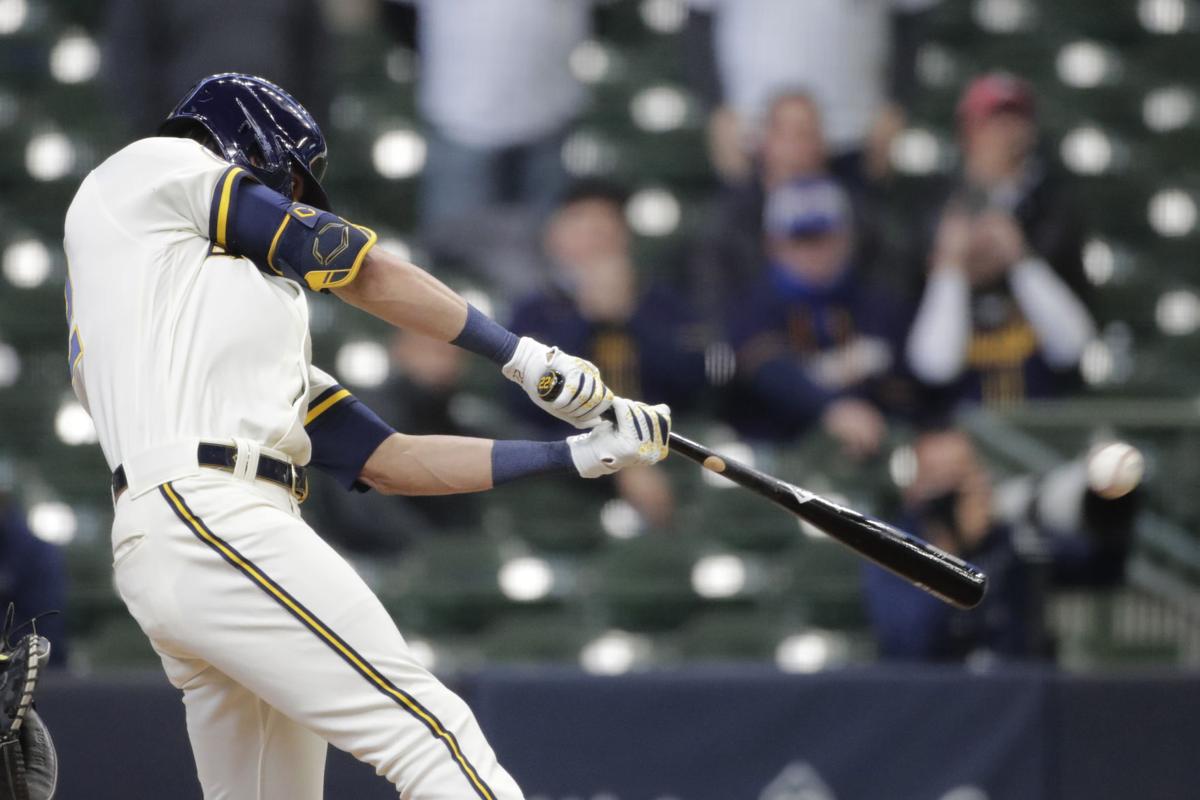 Christian Yelich begins the ninth-inning comeback with an RBI single, pulling the Brewers within 5-3 Thursday afternoon at American Family Field. Yelich went 2-for-4 and scored twice. 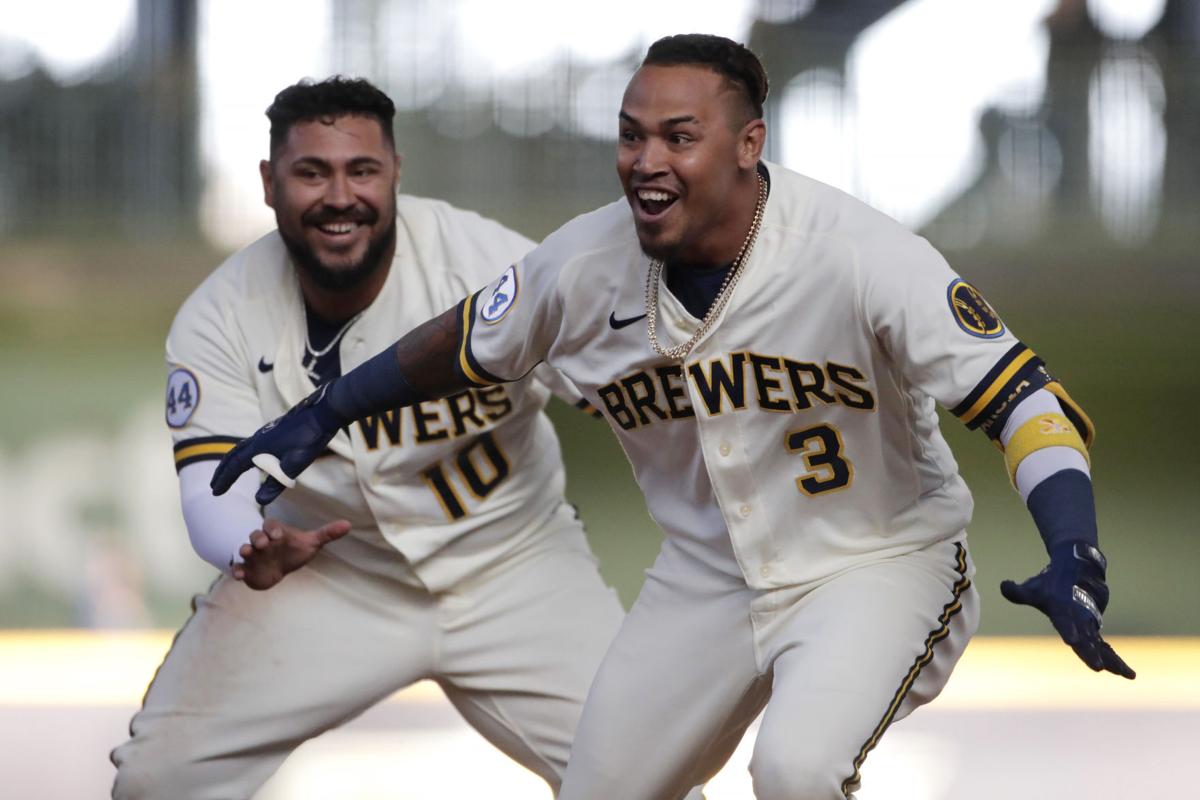 Orlando Arcia celebrates in front of Omar Narvaez after driving in the winning run during the 10th inning. 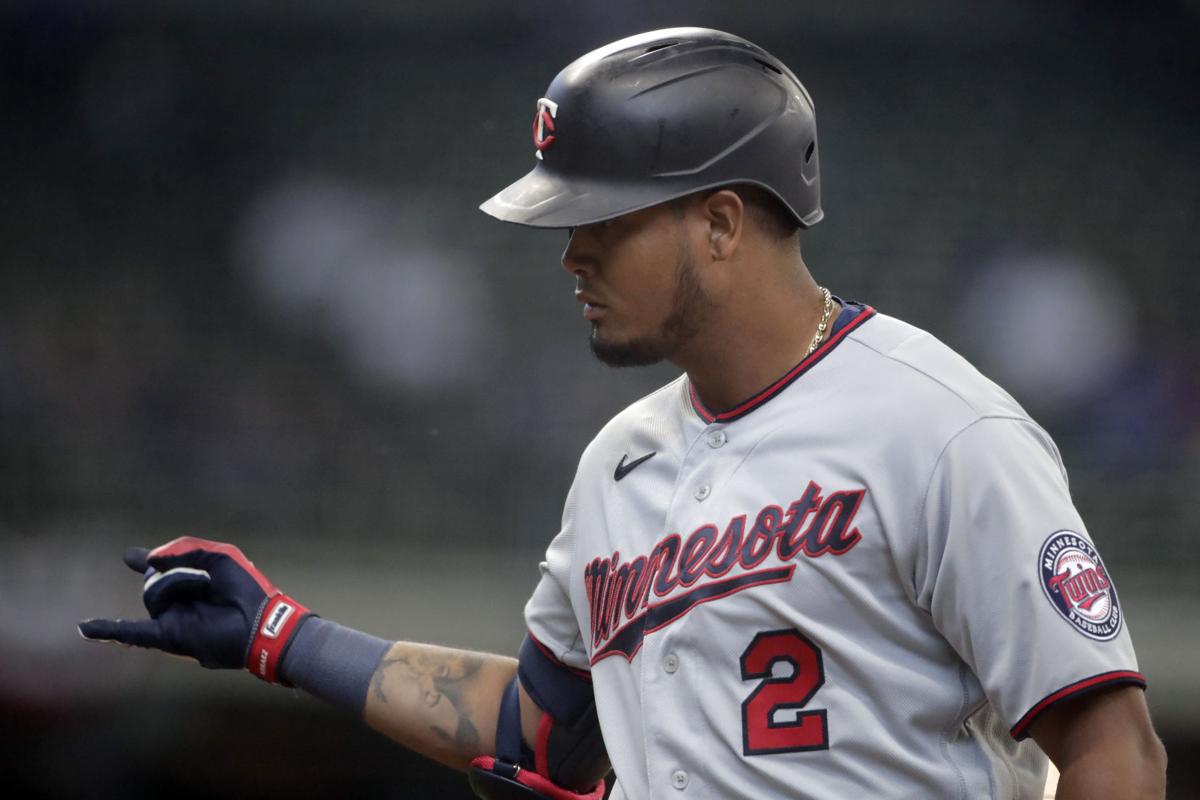 Minnesota Twins' Luis Arraez gestures after hitting an RBI single during the fourth inning of an Opening Day baseball game against the Milwaukee Brewers Thursday, April 1, 2021, in Milwaukee. 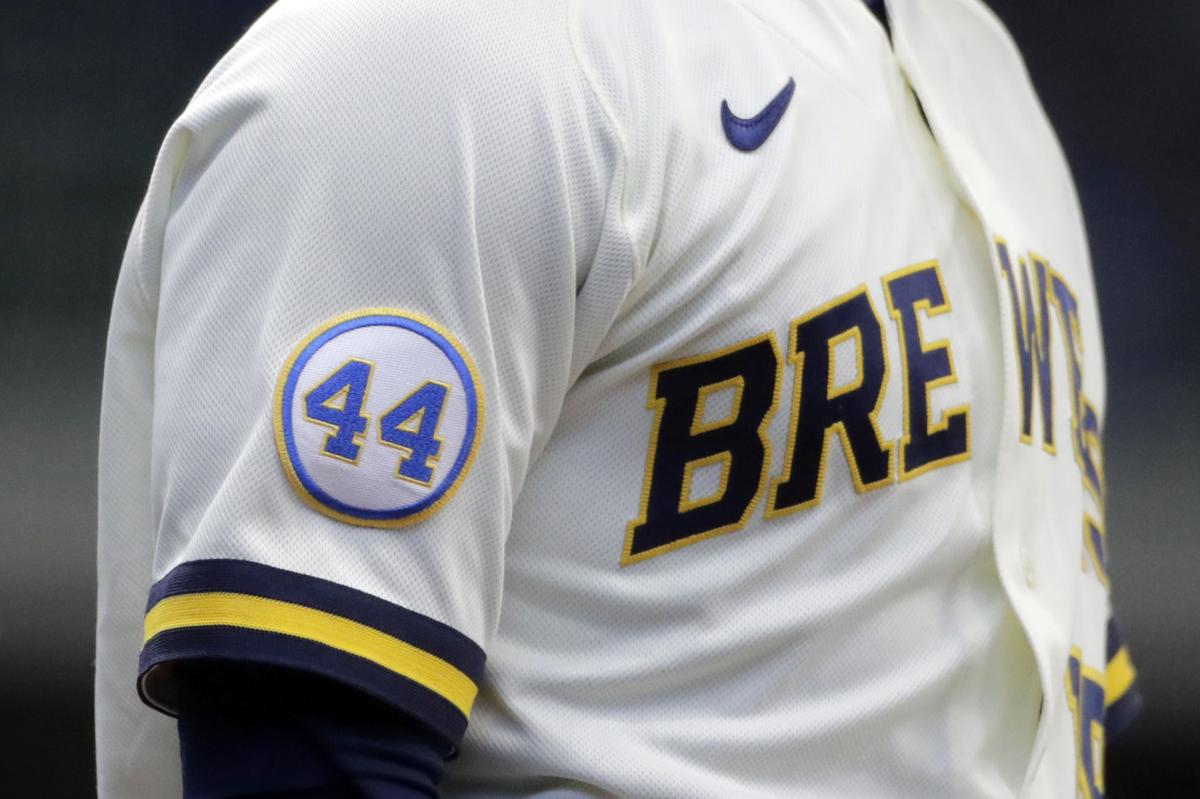 A patch to honor Hank Aaron is seen on the sleeve of Milwaukee Brewers' Keston Hiura during the first inning of an Opening Day baseball game against the Minnesota Twins Thursday, April 1, 2021, in Milwaukee. 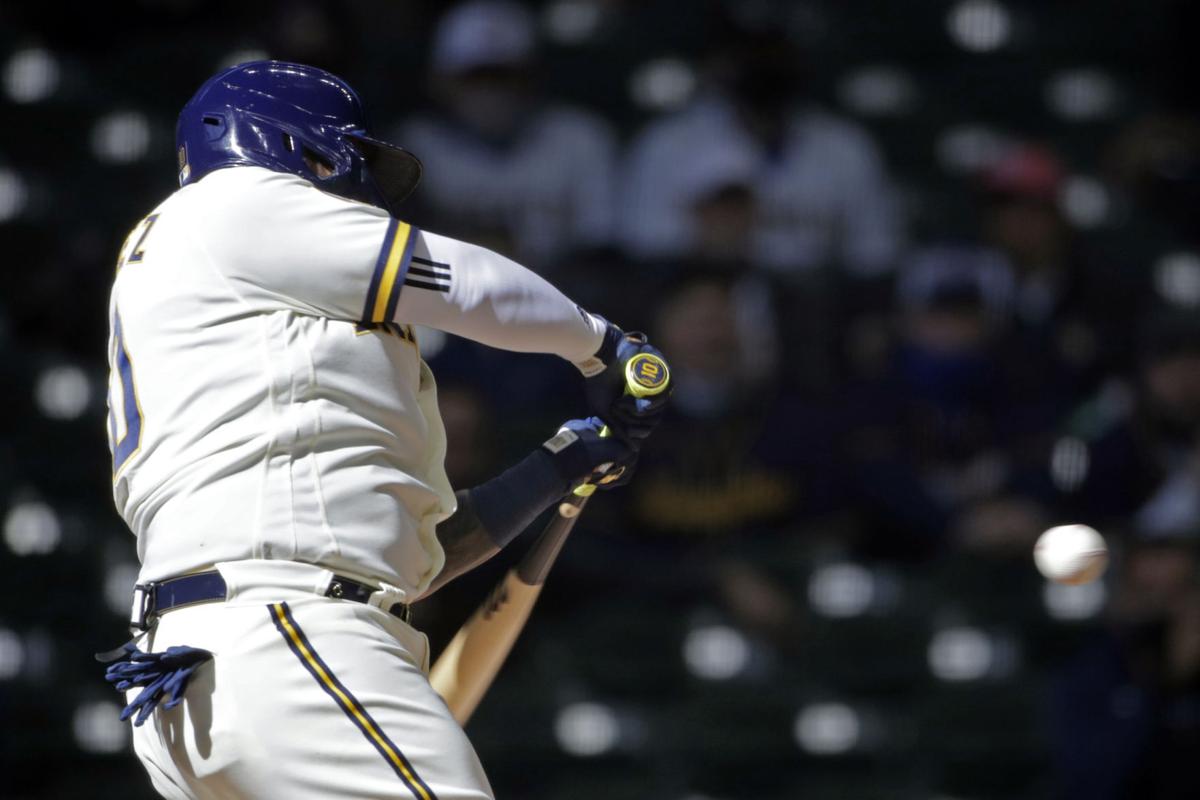 Milwaukee Brewers' Omar Narvaez hits an RBI single during the fifth inning of an Opening Day baseball game against the Minnesota Twins Thursday, April 1, 2021, in Milwaukee.

MILWAUKEE — All along, Milwaukee Brewers manager Craig Counsell downplayed the notion that playing time would be hard to come by for infielders Orlando Arcia, Travis Shaw and Luis Urias. It only took one game for Counsell to prove his own point.

Urias, starting at shortstop, opened the day with a spectacular leaping grab to rob Luis Arraez of a base hit. Shaw drove in three runs, including two with a tying double in the ninth inning. Arcia capped the day with a walk-off fielder’s choice in the 10th as the Brewers opened the season with a 6-5 victory over the Minnesota Twins on Thursday at American Family Field.

“We used everybody today,” Counsell said. “It’s why we carry extra players, to be a little more aggressive in a game like this.”

The late heroics thrilled the first crowd to attend a game at American Family Field since Sept. 22, 2019. Like all of Major League Baseball, the Brewers played last season in empty stadiums because of the COVID-19 pandemic. The City of Milwaukee granted permission for 25% capacity to start the season and there were 11,740 fans on hand.

“There’s no doubt the fans were part of this today,” Counsell said. “It was different for us. The emotion was different, the energy was better. So we’re thankful for it and the guys are thankful for it. On a day like today, a home crowd is what kind of keeps you going when you’re down and they’re still giving you energy. You get that one little crack like we did in the ninth, and the crowd’s right there with you, and you felt it.”

Shaw was responsible for a large portion of the energy. He reached four times in five plate appearances and gave the Brewers their first run after battling Minnesota starter Kenta Maeda for an eight-pitch, bases-loaded walk in the third inning.

His one-out fielder’s choice in the fifth proved to be a lucky break when Twins shortstop Andrelton Simmons couldn’t hold onto a throw from first baseman Migel Sano. That allowed Christian Yelich to reach second and eventually score on Omar Narvaez’s single to bring the Brewers within 3-2.

Milwaukee caught another break in the ninth when Twins reliever Alex Colome hit Kolten Wong with a pitch, then misplayed Keston Hiura’s fielder’s choice, putting runners at first and second. Yelich ripped a line drive to right that rolled out of Max Kepler’s glove, allowing a run to score. Shaw then sent Colome’s first offering to right for the tying two-run double.

“He was trying to get ahead of guys pretty quickly so he was in the zone early then he would play around with guys after that,” Shaw said of Colome. “I was looking for something middle-away. I knew it would be something breaking right at me. I got exactly what I was looking for and put a good swing on it.”

Brewers closer Josh Hader struck out the side in the 10th, with his fastball hitting 100 mph.

“He threw the ball as good as we’ve seen him today,” Counsell said. “That was pretty darn impressive today.”

Lorenzo Cain was the designated runner at second base to open the bottom of the 10th. Narvaez moved Cain to third with his second single. Arcia followed with a chopper to second baseman Jorge Polanco, whose throw home was too late to nab Cain.

“It was great baserunning,” Counsell said. “It was a play that only elite baserunners make because it’s first and third, nobody out, the chopper is a tough play. It was over the pitcher’s head. For the strangeness of that rule and the difference of that rule, he was a perfect guy to be on second base for us.”

Right-hander Brandon Woodruff went four innings in his second consecutive Opening Day start. He allowed three runs on six hits and a pair of walks while striking out five.

A one-out walk to Jake Cave in the third inning turned into a 1-0 deficit when Sano singled and Woodruff bounced a changeup in the dirt that got past Narvaez for a wild pitch. Kepler singled to make it 2-0 before Woodruff closed the inning by striking out Buxton.

“He just wasn’t in a groove,” Counsell said of Woodruff. “The emotion of Opening Day played a little part of it. But I was pretty impressed with how they handled their at-bats against Woody. I thought they did a nice job against him.”

Travis Shaw tied the game with a two-run double in the ninth and after Josh Hader hit 100 MPH on the radar gun in the 10th, Orlando Arcia got …

As the Brewers set out to earn their franchise-record fourth consecutive playoff berth when the season gets underway Thursday afternoon, offense won’t be the team’s primary strength.

What turned out to be a false-positive COVID-19 test result forced Milwaukee into holding just a light workout Wednesday.

Preparing to enter his third year, Keston Hiura enjoyed a strong spring at the plate while learning to play a new position.

Brewers manager Craig Counsell expects a bounce-back performance from his offense in 2021, and a return to a normal spring routine is a big factor, he said.

Brewers strike out 17 times in shutout loss to Twins

Minnesota held Milwaukee hitless until Omar Narváez delivered a one-out single to right off Tyler Duffey in the eighth during its 2-0 victory at American Family Field.

Christian Yelich begins the ninth-inning comeback with an RBI single, pulling the Brewers within 5-3 Thursday afternoon at American Family Field. Yelich went 2-for-4 and scored twice.

Orlando Arcia celebrates in front of Omar Narvaez after driving in the winning run during the 10th inning.

Minnesota Twins' Luis Arraez gestures after hitting an RBI single during the fourth inning of an Opening Day baseball game against the Milwaukee Brewers Thursday, April 1, 2021, in Milwaukee.

A patch to honor Hank Aaron is seen on the sleeve of Milwaukee Brewers' Keston Hiura during the first inning of an Opening Day baseball game against the Minnesota Twins Thursday, April 1, 2021, in Milwaukee.

Milwaukee Brewers' Omar Narvaez hits an RBI single during the fifth inning of an Opening Day baseball game against the Minnesota Twins Thursday, April 1, 2021, in Milwaukee.