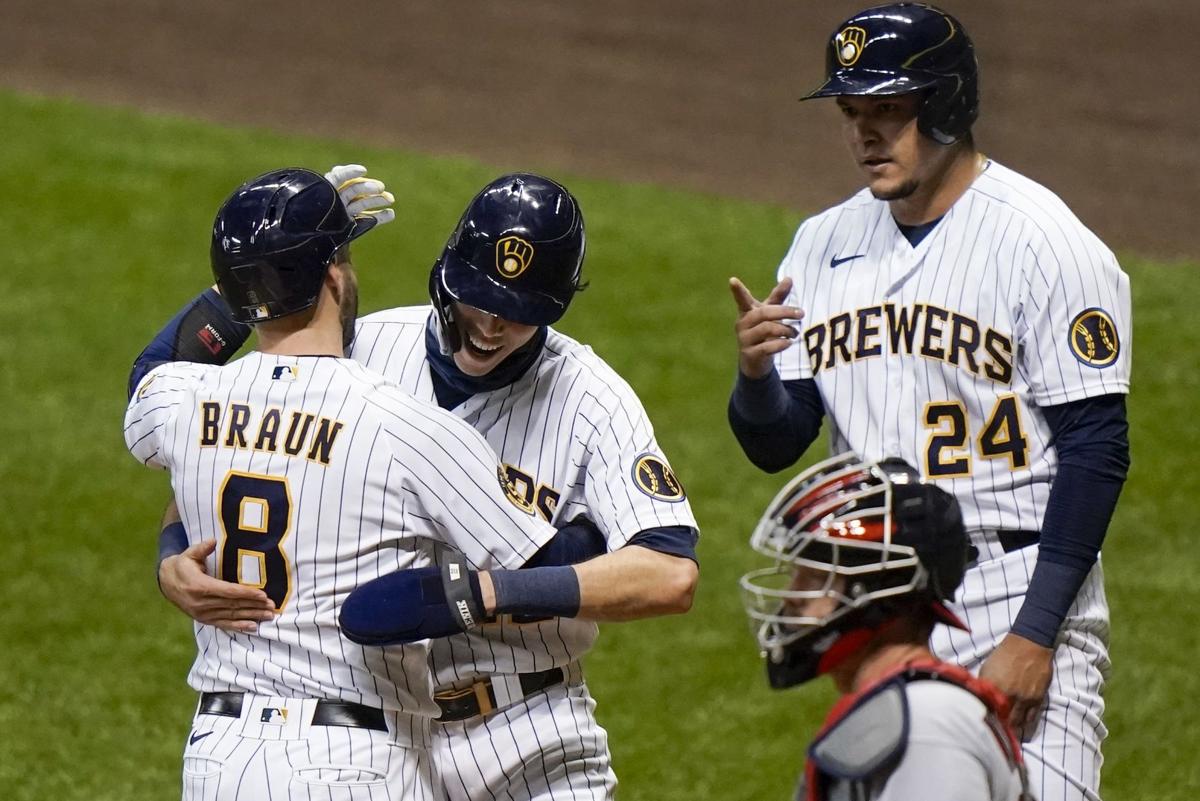 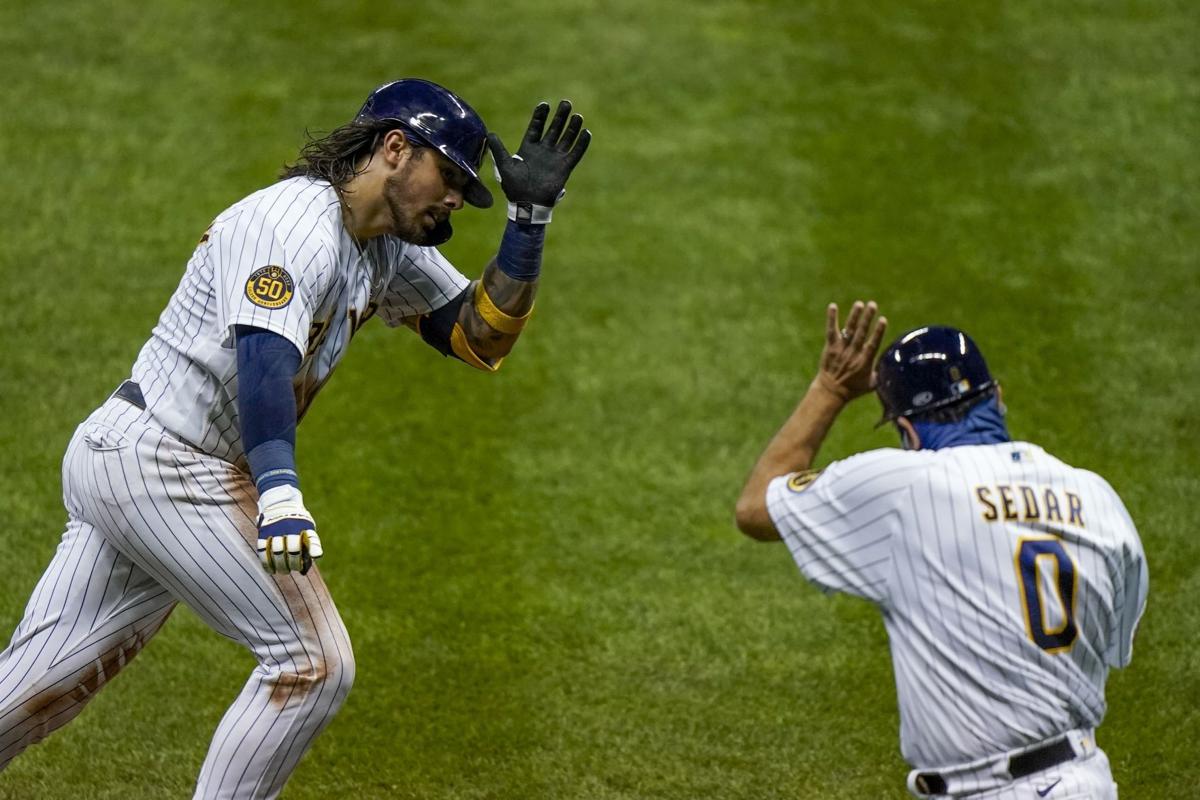 Braun, the franchise’s all-time home run leader, hit the 350th of his career in the first inning of Game 2 of Milwaukee’s doubleheader with the St. Louis Cardinals. The three-run shot off Johan Oviedo highlighted a four-run inning and the Brewers’ bullpen made the lead hold in a 6-0 victory that clinched a split of their second doubleheader in three days at Miller Park.

The Brewers lost the first game 4-2 but took three of the five meetings with St. Louis, leaving them a game back of the Cardinals and Reds for second place and the second playoff berth from the NL Central division with 11 games to play.

“We’re in a good place,” said Braun, who went 4-for-12 in the series with two doubles, two home runs and six RBIs. “We’ve been in worse places with less games to play.

“We’ve been playing better baseball of late. We’ve been a little bit more consistently swinging the bats well and putting pressure on the opponent which is obviously something we didn’t a good enough job of at the beginning of the season.”

The Brewers are 7-8 in September. While they have been plagued at times by the same offensive woes that have been an issue since the start of the season, they’ve also shown signs of breaking out of that slump with a pair of double-digit blowout victories, including an 18-3 rout of the Cardinals on Tuesday night.

They looked to be headed that way again Wednesday, scoring two runs in the first inning of Game 1 one on Keston Hiura’s team-leading 13th home run of the season. But longtime nemesis Adam Wainwright stymied them the rest of the way in a 4-2 loss. The right-hander allowed four hits, struck out seven and walked one in a complete-game effort.

Brad Miller paced the Cardinals with two hits, including a solo homer off Brewers starter Brandon Woodruff in the sixth inning.

Staked to the early 2-0 lead by Hiura’s homer, Woodruff allowed a home run to Tyler O’Neill in the second inning. The Cardinals tied the game on O’Neill’s sacrifice fly in the fourth inning and took a 3-2 lead in the fifth on a double by Tommy Edman.

“I wasn’t as sharp as I was last week but that’s part of it,” Woodruff said. “The fact I was able to go deep in the game and help save that bullpen, I think was huge.”

Though only seven innings, Woodruff’s complete game was the first by a Brewers pitcher since Jimmy Nelson in 2017 and left a full arsenal of relievers for manager Craig Counsell to use during the second game, which he entrusted to his bullpen.

“Woody got us seven innings and that was beautiful,” Counsell said. “It really let us manage the second game however we wanted to and the guys were brilliant.”

After the four-run inning to open Game 2, Oviedo (0-3) allowed only three hits over the next three innings. He also hit three batters, including Braun in the fifth inning which led to some momentary tension. The benches cleared in Tuesday night’s game, but there were no outbursts Wednesday.

“He’s a young pitcher with a good arm,” Braun said. “When he tried to throw the ball inside, he missed up and in numerous times. With what transpired yesterday, I think the umpires did a really good job of staying on top of it and I don’t think it was done intentionally.”

Oviedo’s luck ran out in the sixth when Orlando Arcia reached on a leadoff single and scored two batters later on Jacob Nottingham’s third home run of the season.

“We put ourselves right in the middle of this thing,” Counsell said. “We do have five games left against one of the teams that we’re chasing and we’re within striking distance of both. There’s 11 games left, so we’ve got a significant number of games left. So, we’re right there, man. Eleven games to go, one game back. We’re chasing, but we’re right there.”

Cardinals manager Mike Shildt was suspended one game for his role in a bench-clearing fracas in Milwaukee on Tuesday night, and missed the nightcap of Wednesday's doubleheader against the Brewers.

Major League Baseball announced the penalty about 35 minutes before the Cardinals and Brewers met in the opener at Miller Park.

Shildt was suspended and fined an undisclosed amount "for actions that contributed to inciting the benches-clearing incident" in the fifth inning of an 18-3 loss to Milwaukee on Tuesday night.

The Cardinals and Brewers, both under .500 but competing for spots in the expanded playoff field, tangled with Milwaukee leading 13-2.

Shildt came off the bench to examine Molina's left arm, then he and the All-Star catcher approached the Milwaukee dugout and exchanged words with Brewers players. Players from both teams' dugouts and bullpens massed in front of the Milwaukee bench.

"I go to check on him and make sure he's OK and hear something out of the (Brewers) dugout," Shildt said after the game. "We don't start things, but we're not going to take it. Heard something I didn't appreciate. I will always have our players' backs."

Said Counsell: "Apparently there was a little miscommunication between (Shildt) and our dugout, him and me, I should say, him and me."

Brewers reliever Corey Knebel appears to be back on track

Right-hander Corey Knebel, who was off to a slow start, has added a changeup to his repertoire.

Slumping Christian Yelich rewarded his manager’s faith with a three-hit outing, including a first-inning home run — one of four the Brewers hit in an 18-3 rout of the St. Louis Cardinals at Miller Park.

Corbin Burnes allowed four singles over six innings in improving his record to 4-0 as the Brewers beat the Royals 5-0 at Miller Park..

The Brewers (26-26) recorded their first three-game sweep of the season and moved back to .500 for the first time since Aug. 19.

With playoffs on line, Brewers hit road not knowing how long they'll be gone

Milwaukee hopes the final trip of the regular season will lead to their third straight playoff berth.