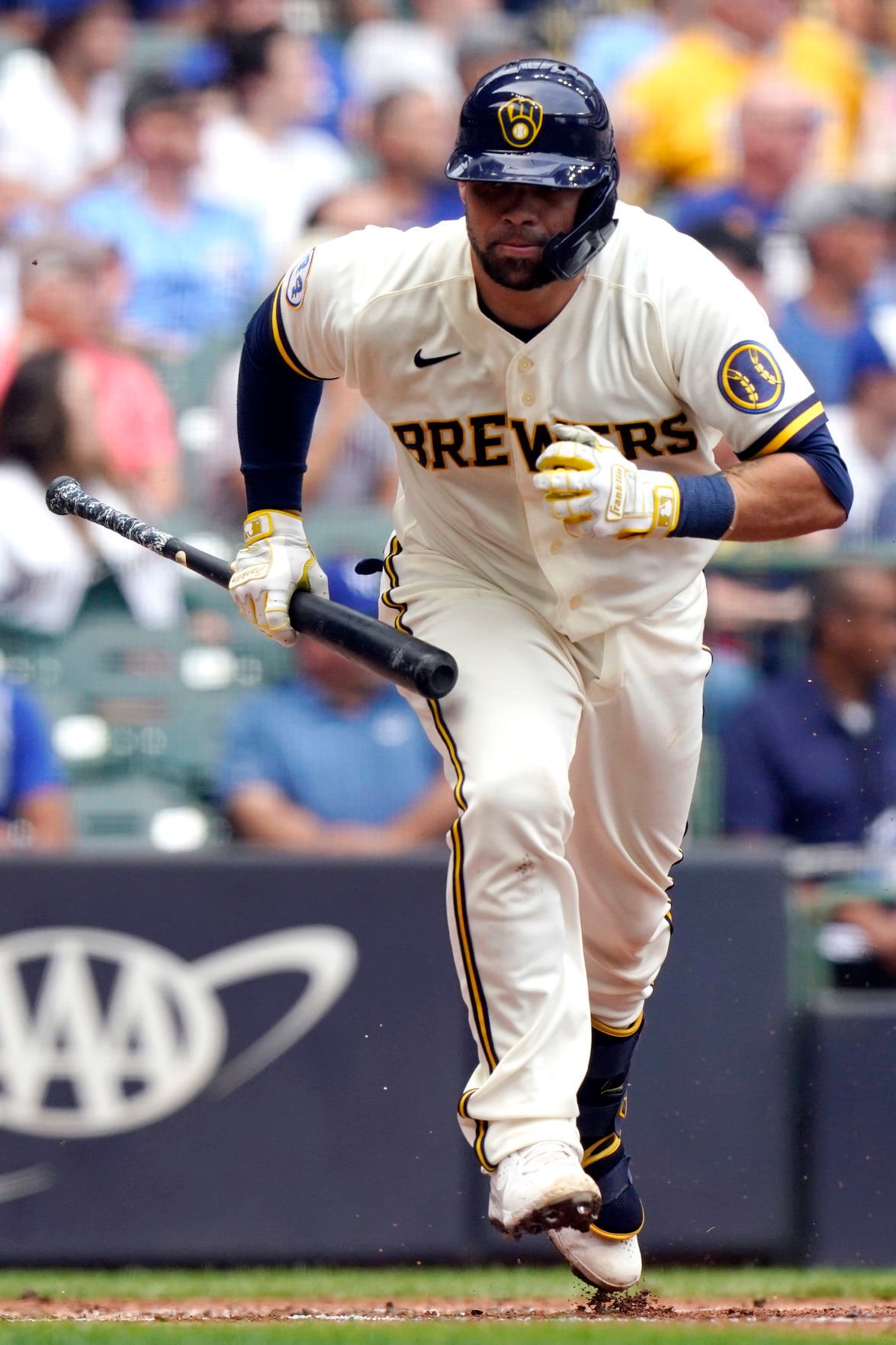 Brewers' Manny Pina runs to first base after hitting a two-run single during the second inning Tuesday.

MILWAUKEE — The Milwaukee Brewers batting order failed to answer the bell for an early start Tuesday.

Ryan O’Hearn and Jorge Soler homered as the Kansas City Royals beat the Brewers 5-2 in a game that began four hours early to give local fans a chance to watch their team in the NBA Finals.

American Family Field is about three miles from the downtown Fiserv Forum, where as many as 65,000 people were expected to watch Game 6 from outdoor plazas as the Milwaukee Bucks tried to beat the Phoenix Suns for their first championship since 1971.

Some fans came to the ballpark with signs rooting for both the Brewers and Bucks.

“Hopefully we come out tomorrow after a Bucks win and tie the series,” said Brewers starter Brett Anderson, who gave up two runs and three hits over five innings in his first start of the second half.

Mike Minor (7-8) allowed one earned run and five hits in six innings, snapping a personal four-start losing streak. He struck out five and walked one.

“Right now it’s all about the starting pitching,” Royals manager Mike Matheny said. “He was really good and really, there in the second, we just didn’t help him. We had two plays we didn’t make and it cost him two runs and about 20 pitches.”

“He did a great job of keeping us there, not letting it become too much and giving the offense a chance to do something,” he said.

Greg Holland got his sixth save as the Royals improved to 3-0 against Milwaukee in 2021.

“I think guys are still out there playing with 100% effort, no matter what the standings say,” Minor said. “No matter what the wins or losses say, there are a bunch of guys in the clubhouse who don’t really care. We know we haven’t played well this season but we’re not going to give up.”

O’Hearn hit a tiebreaking, two-run homer in the seventh off Hunter Strickland (0-1). It was his seventh home run of the season.

Soler’s eighth homer, a solo drive in the fourth, tied it at 2.

Andrew Benintendi had a sacrifice fly in the Royals first.

Manny Pina’s two-run single in the second put Milwaukee up 2-1. Avisail Garcia had three hits for the Brewers.

“There wasn’t much happening against (Minor),” Brewers manager Craig Counsell said. “Nothing of significance, multiple guys on, things like that. We probably made some innings too easy on him.”

Royals starting pitchers Danny Duffy and Brady Singer were put on the injured list. Duffy, whose 2.31 ERA and 65 strikeouts in 61 innings has been one of the bright spots for a rotation that owns the second-worst ERA in MLB, has a strained flexor in his left elbow. Singer is out because of right shoulder fatigue after allowing seven runs in two innings his last time out.

Brewers right-hander Brad Boxberger played catch Tuesday but is still considered day-to-day after experiencing stiffness in his shoulder during his outing Saturday in Cincinnati. Boxberger’s issue popped up the same day Milwaukee put reliever Devin Williams on the IL.

The Brewers and Royals wrap up their two-game set Wednesday afternoon with Milwaukee left-hander Eric Lauer (3-4, 3.83 ERA) opposing right-hander Brad Keller (6-9, 5.97). Lauer was originally slated to start Tuesday but was given an extra day because of a fingernail issue that had been bothering him after his last start.

The Brewers make a pair of errors that caused Kansas City's first five runs to be unearned in the Royals' 6-3 victory, their fourth in as many meetings this season.

Tyrone Taylor hit a grand slam to cap the Brewers’ six-run outburst in the seventh inning of a 7-1 victory over the White Sox on Friday night.

Brewers' Manny Pina runs to first base after hitting a two-run single during the second inning Tuesday.