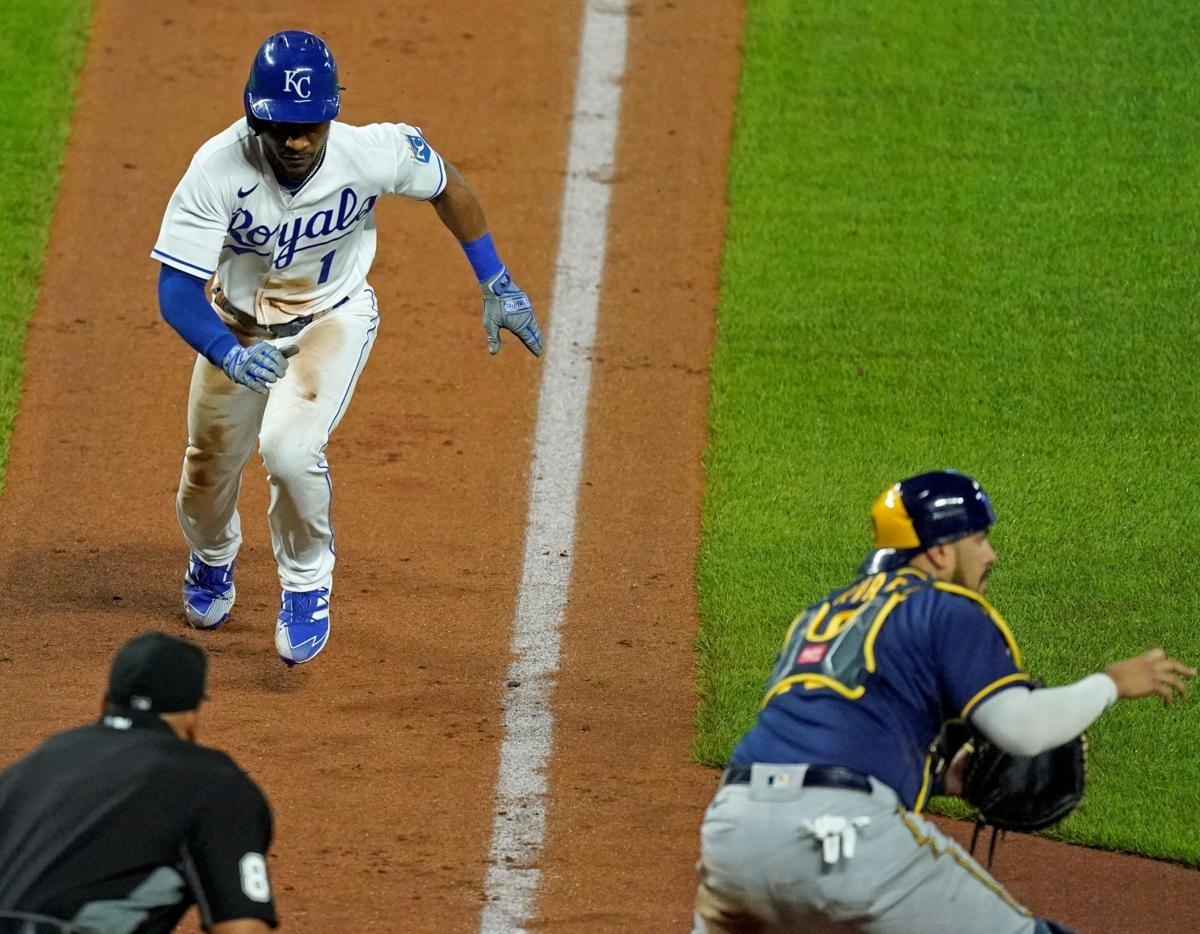 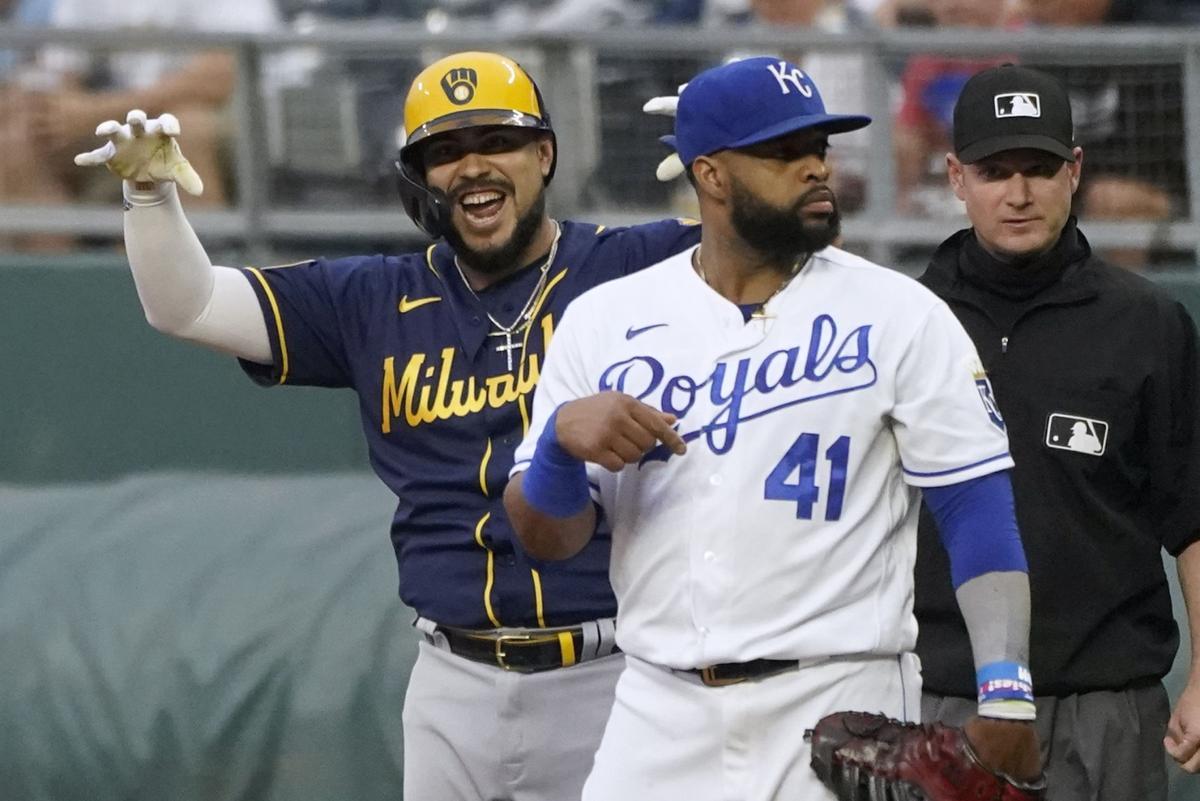 Then they pounced on the Milwaukee bullpen.

Jorge Soler hit a slump-busting homer to tie the game, Nicky Lopez bunted home the go-ahead run, and the Kansas City Royals used a late rally to squeak past the Brewers 6-4 on Wednesday night to wrap up a two-game sweep — their first series win over Milwaukee since June 2015.

Scott Barlow (2-1) got the final two outs of the seventh inning, Greg Holland worked the eighth and Josh Staumont coughed up a run in the ninth before striking out Omar Narvaez looking with two runners aboard for his fifth save.

“You’re going to have these days when you’re facing pitchers like we faced yesterday and Burnes today. Those guys have good stuff,” Royals manager Mike Matheny said. “They’re not going to give up much.”

The Royals managed just two hits off Burnes when his pitch count caused him to leave leading 3-2 after six innings. Soler was the first batter of the seventh and promptly hammered J.P. Feyereisen’s second pitch to end his 0-for-12 skid.

The Royals added two more runs off Brad Boxberger in the eighth before their own bullpen finished things off.

“We just keep picking up each other,” Royals starter Brad Keller said. “We’re clicking as a team again.”

Taylor hit a two-run homer in the second inning and robbed Jackie Bradley Jr. of a home run with a spectacular leaping catch in the sixth. The Brewers still scored on the sacrifice fly, but Taylor’s catch saved a run and kept Kansas City within 3-2.

Bradley homered off Keller earlier in the game to end his own 0-for-22 slump.

“That’s baseball,” Burnes said. “We got off to a hot start early; we’ve scuffled a little bit. They made a couple of good swings tonight and it got away from us. We’re in a good spot as a team. All it’s going to take is one game for everything to line up.”

Steady drizzle predicted all afternoon began in the third, then the rain picked up in the top of the fourth, and for a while it looked as if it would be a race to play enough innings to call the game official.

The showers briefly subsided, though, and Burnes and Keller kept dueling. Burnes baffled the Royals with his darting 85 mph curveball and searing 95 mph cutter while Keller kept getting the Brewers to chop into groundouts.

Keller was lifted with a runner on third and one out in the sixth. Bradley promptly tagged Jake Brentz with a deep fly ball that, despite Taylor’s catch at the top of the wall, allowed Avisail Garcia to tag up with the go-ahead run.

Burnes was pulled after six innings, and Soler’s homer and Lopez’s go-ahead bunt rendered moot his latest dazzling start. He allowed just two hits over six innings, and while Burnes walked his second batter of the season, he also struck out nine to join the Indians’ Shane Bieber with at least that many Ks in each of his first seven starts.

Pedro Martinez has the major league record with at least nine strikeouts in his first nine starts for Boston in 1999.

Brewers outfielder Christian Yelich (back) played his second game at designated hitter after returning from a long IL stay. He was 0-for-2 with three walks.

“He’s fine. Haven’t had any trainer conversations or anything,” Counsell said.

The Brewers gave struggling shortstop Luis Urias a break from the lineup after making four errors in the past two games. One on a throw to first base in the eighth inning Tuesday night allowed Kansas City to add an insurance run in its 2-0 win.

“He’s in a little bit of a mental slump, not a physical slump,” said Counsell, who used Pablo Reyes at shortstop Wednesday night. “Those are a little bit trickier to fix or understand how to help him, but we’re doing our best.”

Milwaukee has Thursday off before right-hander Adrian Houser (3-4, 3.63 ERA) takes the mound for Milwaukee to open a three-game series Friday night in Cincinnati.

Brandon Woodruff pitches into the eighth inning but is tagged for the loss.

Milwaukee's 3.3 runs per game this month ranks 29th in the majors.

Milwaukee loses almost all of an 8-0 lead before coming away with a 10-9 victory at American Family Field.

Milwaukee finishes with three hits and loses third consecutive game to fall to .500.

Brewers shortstop Luis Urias struggling in the field, at the plate

The 23-year-old is enduring a "mental slump," manager Craig Counsell says, and received a day off in the finale of the two-game series at Kansas City.

In need of a boost: 3 things to watch as Brewers return home to host Padres

Having won a series for the first time in two weeks, the Milwaukee Brewers return home Monday to open a quick four-game homestand against the …