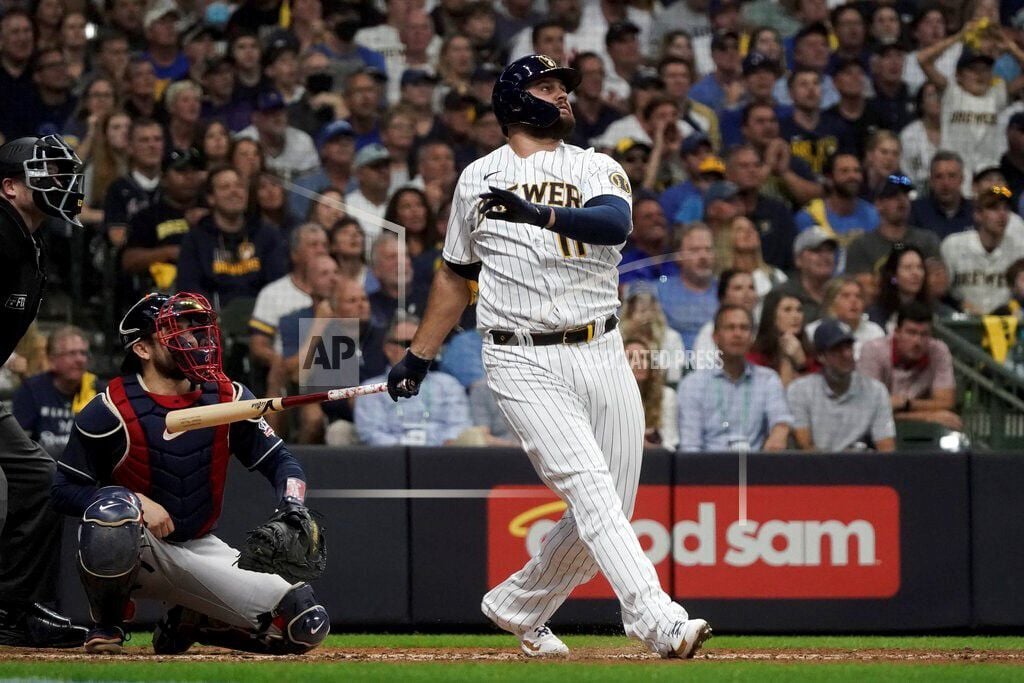 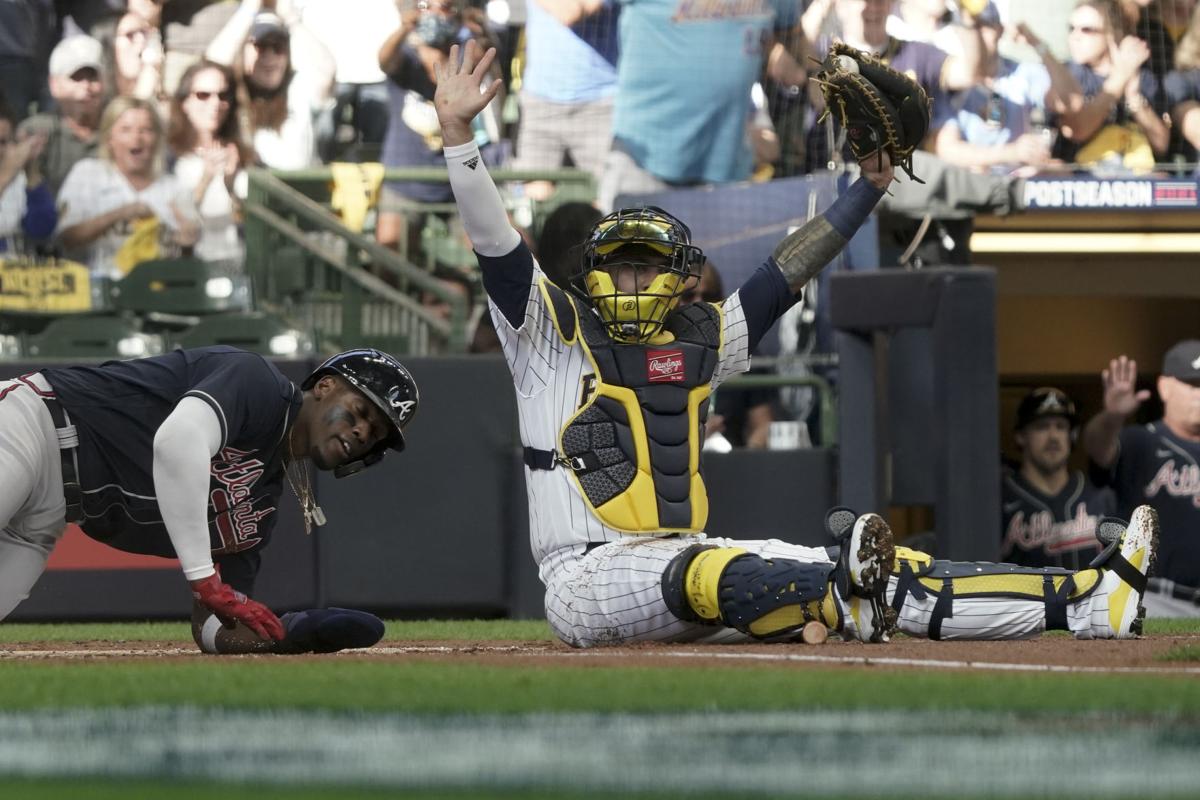 Brewers' Omar Narvaez calls timeout after tagging out  Braves' Jorge Soler to complete a double play during the first inning.

MILWAUKEE — Rowdy Tellez fouled off Charlie Morton’s pitch in a scoreless game, then headed toward the dugout for a deep breath and a new bat.

Tellez spoiled Morton’s gem by hitting a two-run homer in the seventh inning, leading the Brewers over the Atlanta Braves 2-1 Friday in the opener of their NL Division Series.

“I’m still out of breath,” Tellez said. “It was a crazy moment.”

Corbin Burnes, Adrian Houser and Josh Hader combined on a four-hitter that gave Milwaukee the early lead in this best-of-five series.

Former Brewers infielder Orlando Arcia grounded to second with runners on the corners to end the game. That came after Milwaukee catcher Omar Narváez — who combined with first baseman Tellez on a key first-inning double play — blocked Hader’s 1-2 pitch in the dirt to keep Freddie Freeman at third base.

Neither team produced much offense until the Brewers finally broke through in the seventh.

After Morton (0-1) plunked Avisaíl García with a 1-2 pitch to start the inning, Tellez ripped another 1-2 offering from Morton over the center-field wall to break a scoreless tie.

“Even in those at-bats, I got them where I wanted to be,” Morton said. “I just didn’t finish them off. I hit Avi, and then I grooved one to Rowdy.”

Tellez was 1-for-13 against the Braves this season until delivering that 411-foot drive, which came immediately after the hefty, bearded slugger fouled a pitch off.

“I don’t know if I broke that bat,” Tellez said. “I just saw something fly off of it. I was like, ‘I need all the help I can get right now.’

“I walked back, and the bat boy didn’t even realize. I kind of just collected my breath and calmed myself, got back to the box, and I said, ‘(Keep) my foot down and just see the pitch and hit the ball hard.’ That’s all I wanted to do.”

The big hit capped quite a comeback for Tellez, who was activated from the injured list Saturday after missing about three weeks with a right patella strain.

“It was a tight timetable,” Brewers manager Craig Counsell said. “We knew it was going to be tight. We were fortunate that he got himself healthy. The training staff did a heck of a job.”

Atlanta’s Joc Pederson lofted a pinch-hit homer off Houser (1-0) with two outs in the eighth.

Morton’s 85th and final pitch to Tellez was among the few mistakes he made all day. He struck out nine, walked one and hit a batter to continue his recent history of exceptional postseason performances.

Burnes was every bit as good in his first career postseason start.

The NL Cy Young Award contender opened the game with two straight walks and threw 40 pitches in the first two innings but settled down from there. The right-hander struck out six and gave up two hits and three walks in six shutout innings, throwing 91 pitches.

“They’re an aggressive offense,” Burnes said. “That was kind of the key tonight was to try to play off of that. We were just trying to do too much early on.”

After the Braves put runners on the corners with nobody out but failed to score in the top of the first, nobody got a runner past first base until Tellez homered.

Neither team had a hit until Milwaukee’s Lorenzo Cain had a one-out single to right in the third. The Braves’ first hit came when Eddie Rosario led off the fifth with a bloop single to center.

Atlanta’s best scoring chance came at the start of the game.

Burnes walked the first two batters he faced — Jorge Soler and Freeman — with Soler advancing to third on a passed ball.

Ozzie Albies followed with a sharp grounder down the first-base line that Tellez caught just before stepping on the bag. When he noticed Soler was trying to score from third, Tellez threw to the plate.

Narváez caught the one-hop throw and tagged Soler to complete the double play. Counsell called it the play of the game.

“I made a terrible throw,” Tellez said. “I’ve got a good catcher back there. He’s an All-Star for a reason. Made a great tag. That whole play doesn’t happen without him.”

Freeman advanced to third on a wild pitch, but Burnes struck out Austin Riley to end the threat.

“You love to get a pitcher like that early before he gets settled in,” Braves manager Brian Snitker said. “Because they get out of an inning like that and things happen like (they) did.”

Milwaukee is playing this series without setup man Devin Williams and left-handed reliever Brent Suter. Williams fractured his throwing hand when he punched a wall the night the Brewers clinched the NL Central, and Suter has a strained right oblique.

Without those two in the bullpen, the Brewers had Houser work two innings to set things up for Hader. Houser spent the regular season in Milwaukee’s rotation.

"Every time he takes the mound, it's like for us it's a win," shortstop Willy Adames said.

The Brewers will send out the right-handers on Friday and Saturday, respectively, against the Braves.

Craig Counsell said the goal was to rest players for the playoffs after securing the NL Central title.

ST. LOUIS — The Milwaukee Brewers will be without one of their biggest weapons when the playoffs get underway next week.

Milwaukee puts two runners on base in each of the final three innings but fails to get a big hit.

Watch now: 5 plays too costly for the Brewers to overcome as the Braves earned their second straight win

That the Milwaukee Brewers find themselves down, 2-1, to the Atlanta Braves and on the brink of elimination from the National League Division …

The slugger is 3-for-3 with two home runs as a pinch hitter in the series.

Milwaukee is 0-for-16 with runners in scoring position in the series, including eight more fruitless at-bats in Game 3.

Bats wake up, but Brewers eliminated after Josh Hader gives up homer to Braves' Freddie Freeman

Josh Hader gives up a tiebreaking solo shot to Freddie Freeman in the eighth inning as Milwaukee loses the NL Division Series in four games.

Freddie Freeman and the Atlanta Braves will get another chance to finish the job they came agonizingly close to achieving a year ago.

Milwaukee Brewers president of baseball operations David Stearns says nobody has been able to figure out the cause of Christian Yelich’s hitting struggles over the past couple of seasons.

Brewers' Omar Narvaez calls timeout after tagging out  Braves' Jorge Soler to complete a double play during the first inning.