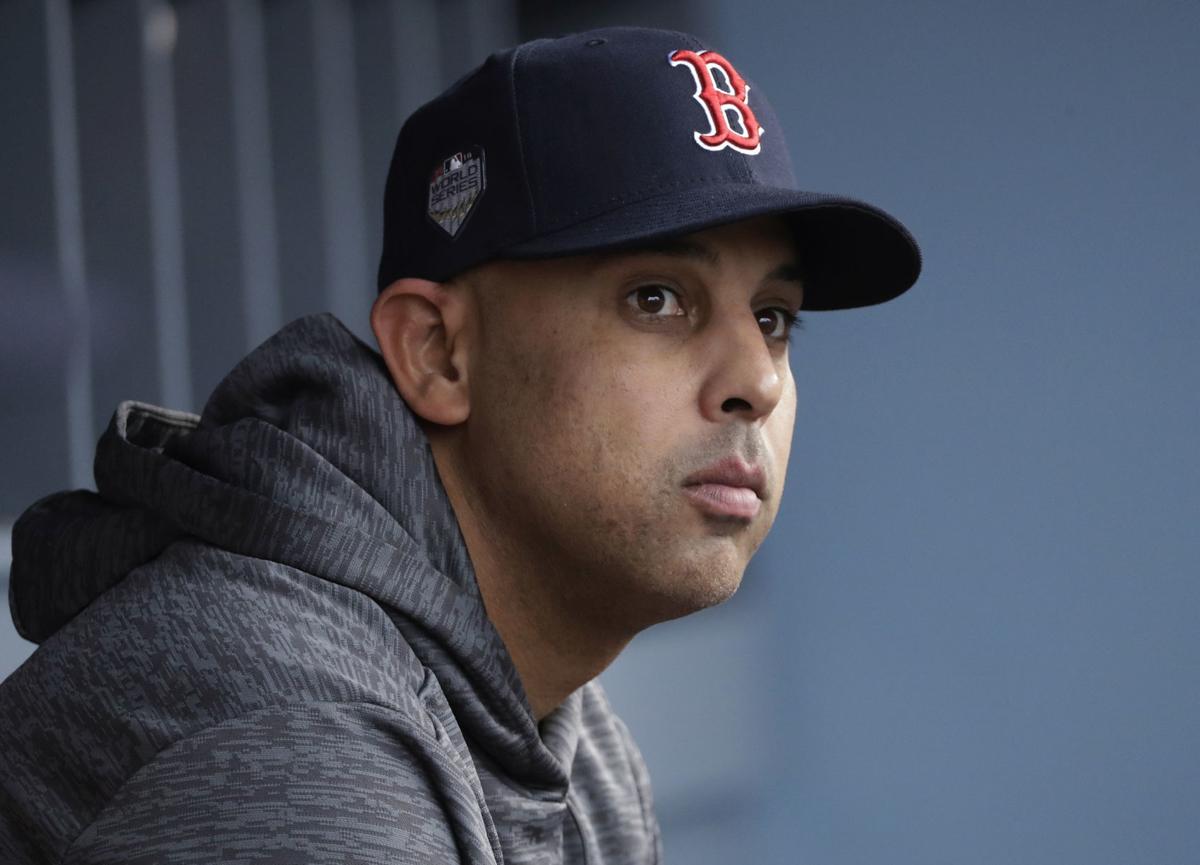 BOSTON — Alex Cora has already been identified as a ringleader in an illegal system of sign stealing when he was with the Houston Astros.

The Red Sox didn't wait to see what punishment Major League Baseball might give him for possibly bringing a similar scheme with him to Boston.

Cora was fired by the team he led to the 2018 World Series title on Tuesday night, one day after baseball Commissioner Rob Manfred said he was "an active participant" in the Astros' cheating when he was a bench coach in Houston.

Manfred mentioned Cora by name 11 times in a nine-page report, saying he "originated and executed" the scheme in which Houston used a center field camera to decode catchers' signals to pitchers, then banged on a trash can to relay the signs to batters so they would know what type of pitch was coming.

The Astros fired manager AJ Hinch and general manager Jeff Luhnow, making that announcement an hour after Manfred suspended them for the 2020 season for their roles in the cheating scheme. Cora met Tuesday with Boston management and they issued a release saying they had "mutually agreed to part ways."

"Given the findings and the commissioner's ruling, we collectively decided that it would not be possible for Alex to effectively lead the club going forward," the team said in a statement attributed to owner John Henry, chairman Tom Werner, CEO Sam Kennedy and Cora.

The team called a news conference for Wednesday afternoon to address the scandal, which leaves it without a manager less than a month before pitchers and catchers are due to report to spring training.

Bench coach Ron Roenicke, who spent five years managing the Milwaukee Brewers, is the most experienced member of the current coaching staff; former Red Sox catcher Jason Varitek has also been mentioned as a possible replacement.

In suspending Luhnow and Hinch, Manfred said he was withholding Cora's punishment until completing a separate investigation of accusations the Red Sox stole signs in 2018. That investigation will continue; Cora and the Red Sox could both face additional penalties.

"We agreed today that parting ways was the best thing for the organization," Cora said in a statement released by the team. "I do not want to be a distraction to the Red Sox as they move forward."

New Mets manager and former Astros player Carlos Beltrán also was implicated by Manfred in his report Monday - the only player mentioned. Manfred decided that no players would be disciplined for breaking rules prohibiting the use of electronics to steal catchers' signs in 2017 after levying penalties against Boston and the New York Yankees.

The Los Angeles Dodgers lost the 2017 World Series to the Astros and again in 2018 to the Red Sox.

"All clubs have been asked by Major League Baseball not to comment on today's punishment of the Houston Astros as it's inappropriate to comment on discipline imposed on another club," Los Angeles said in a statement Monday night. "The Dodgers have also been asked not to comment on any wrongdoing during the 2017 World Series and will have no further comment at this time."

A member of Boston's 2007 championship club, Cora was hired in November 2017 to take over a Red Sox team that won back-to-back AL East titles in 2016-17 but failed to advance in the postseason under John Farrell.

Cora guided the team to a franchise-record 108 regular-season victories in 2018 and its fourth World Series title in 15 years. The Red Sox beat a pair of 100-win teams in the Yankees and Astros in the AL playoffs, then defeated the Dodgers in a five-game World Series to make Cora the first Puerto Rican manager to win a championship and the fifth manager to guide a team to a title in his first season.

He was rewarded by president of baseball operations Dave Dombrowski with a new contract adding an extra guaranteed season in 2021, a deal that included a club option for 2022.

Dombrowski was fired in September after the Red Sox stumbled toward an 84-78 record and missed the playoffs for the first time since 2015. He was replaced this offseason by former Tampa Bay Rays executive Chaim Bloom, who will lead the search for a new manager.

"This is a sad day for us," Henry, Werner and Kennedy said in a statement. "Alex is a special person and a beloved member of the Red Sox. We are grateful for his impact on our franchise. We will miss his passion, his energy and his significant contributions to the communities of New England and Puerto Rico."

The scandal -- but not the severity of the punishment - is reminiscent of the New England Patriots' sign-stealing scheme in 2007, in which the team videotaped opposing coaches to decipher their signals. The NFL fined the Patriots $250,000 and docked them a first-round draft pick, and also fined coach Bill Belichick $500,000.

Texas Rangers All-Star pitcher Mike Minor eagerly took a jab on Twitter at Cora, who insinuated Minor wasn't "playing the game the right way" when the left-hander encouraged a teammate to drop a popup against Boston during his final start of 2019 so Minor could pursue his 200th strikeout of the season.

"But but he plays the game the right way..." Minor wrote.

Cora's departure means 10 of the 30 major league teams will start the 2020 season with a new manager. Boston's new manager will be its fifth in 10 seasons.