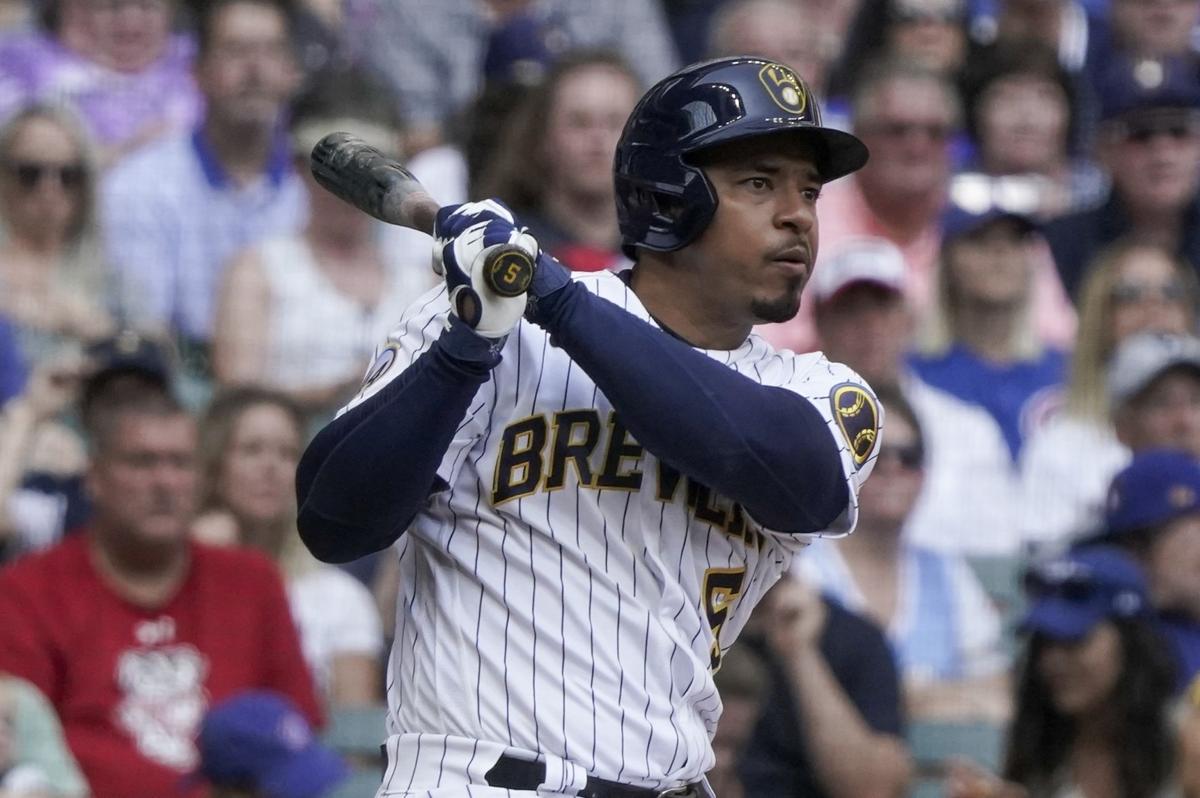 Eduardo Escobar hits an RBI double that gave the Brewers a 2-1 lead in the fifth inning Sunday.

MILWAUKEE — Patrick Wisdom set a Chicago Cubs record for homers by a rookie on a day that exemplified his feast-or-famine approach.

Wisdom struck out four times for a second straight day but delivered a towering three-run shot that highlighted the Chicago Cubs' eighth-inning comeback in a 6-4 victory over the Milwaukee Brewers on Sunday.

"It's tough when you have nights like I did last night, and then you see your name in the lineup again hitting fourth," Wisdom said. "You're like, 'Well, they still believe in me. I've got to believe in myself.' It's kind of like a gut check to say, 'Hey, let's go.' Keep believing. Keep going."

The Brewers' ninth-inning rally fell short and the magic number for wrapping up their first NL Central title since 2018 remained at three. Milwaukee clinched its fourth consecutive playoff berth Saturday.

Wisdom has struck out on over 40% of his plate appearances, but he also has 27 homers. That breaks the franchise rookie record formerly held by Kris Bryant, who homered 26 times in 2015.

"This game is tough," Wisdom said. "It can really punch you in the gut sometimes. But you've got to keep getting back up. That's what it's about - resiliency and the next pitch, focusing on that."

Milwaukee trailed 6-2 before nearly coming all the way back against Rowan Wick in the bottom of the ninth.

Christian Yelich singled home two runs with a two-out single. Omar Narváez singled and Luis Urías walked to load the bases. The Cubs brought in Michael Rucker, who retired Jace Peterson on a fly to center to earn his first career save.

The Brewers had beaten the Cubs 11 consecutive times, one off the franchise record for consecutive victories over one opponent. The Brewers won 12 straight from the Pittsburgh Pirates in 2008.

Milwaukee seemed on its way to matching that record until the Cubs rallied from a 2-1 deficit in the eighth.

"It was a great at bat by Contreras," Counsell said. "I don't know that it took anything out of (Boxberger), but he made probably two pitches over the middle of the plate after that, and they hit them pretty hard."

"The one thing that I love about Patrick is he just keeps having his at bats," Cubs manager David Ross said. "It hasn't been the best series for him offensively, a lot of swing-and-miss there, and he continues to be that threat. That's what he brings. He plays good defense. He's versatile. And he's got real thump in the bat."

The Cubs delivered their big rally after getting just two hits in the first seven innings.

Brewers starter Eric Lauer struck out six and allowed one run, one hit and three walks in 5 1/3 innings. He owns a 1.83 ERA over his last 13 appearances.

Lauer held the Cubs without a hit until Trayce Thompson sent an 0-2 pitch over the left-field wall with one out in the fifth to break a scoreless tie.

The homer was Thompson's first hit of any kind in the major leagues since June 14, 2018, when he was playing for the Chicago White Sox. He returned to the majors for the first time in over three years on Tuesday when the Cubs called him up from Triple-A Iowa.

Adam Morgan (1-0) earned the win with one inning of shutout relief.

Brewers center fielder Lorenzo Cain was out of the lineup with what Counsell described as “general body soreness” after diving against the wall to rob Contreras of an extra-base hit Saturday. … Milwaukee shortstop Willy Adames, who went on the injured list Sept. 5 with a left quadriceps strain, is likely to return Monday. … Counsell said left-hander Brett Anderson is healthy again. Anderson has been on the injured list since Sept. 2 with a shoulder bruise.

The Brewers open a four-game home series with the St. Louis Cardinals on Monday. Scheduled starters are right-hander Freddy Peralta (9-4, 2.69 ERA) for the Brewers and right-hander Jake Woodford (2-3, 4.30) for the Cardinals.

Milwaukee is 61-42 in games when Kolten Wong has at least one plate appearance and 55-41 in games he's started at second base.

Willy Adames likely to return to Brewers lineup on Monday

The shortstop has been out since Sept. 5 due to a quad injury.

The Cubs have come alive in the past two weeks while the Cardinals are in the lead for the second NL wild card spot.

St. Louis is 10-3 since dropping two of three games in Milwaukee earlier this month.

Outfielder Tyrone Taylor returned to the team Tuesday after missing nearly a month with a strained right oblique.

The Brewers, whose magic number to clinch the NL Central stayed at three, lead the Cardinals by 9½ games.

Eduardo Escobar hits an RBI double that gave the Brewers a 2-1 lead in the fifth inning Sunday. 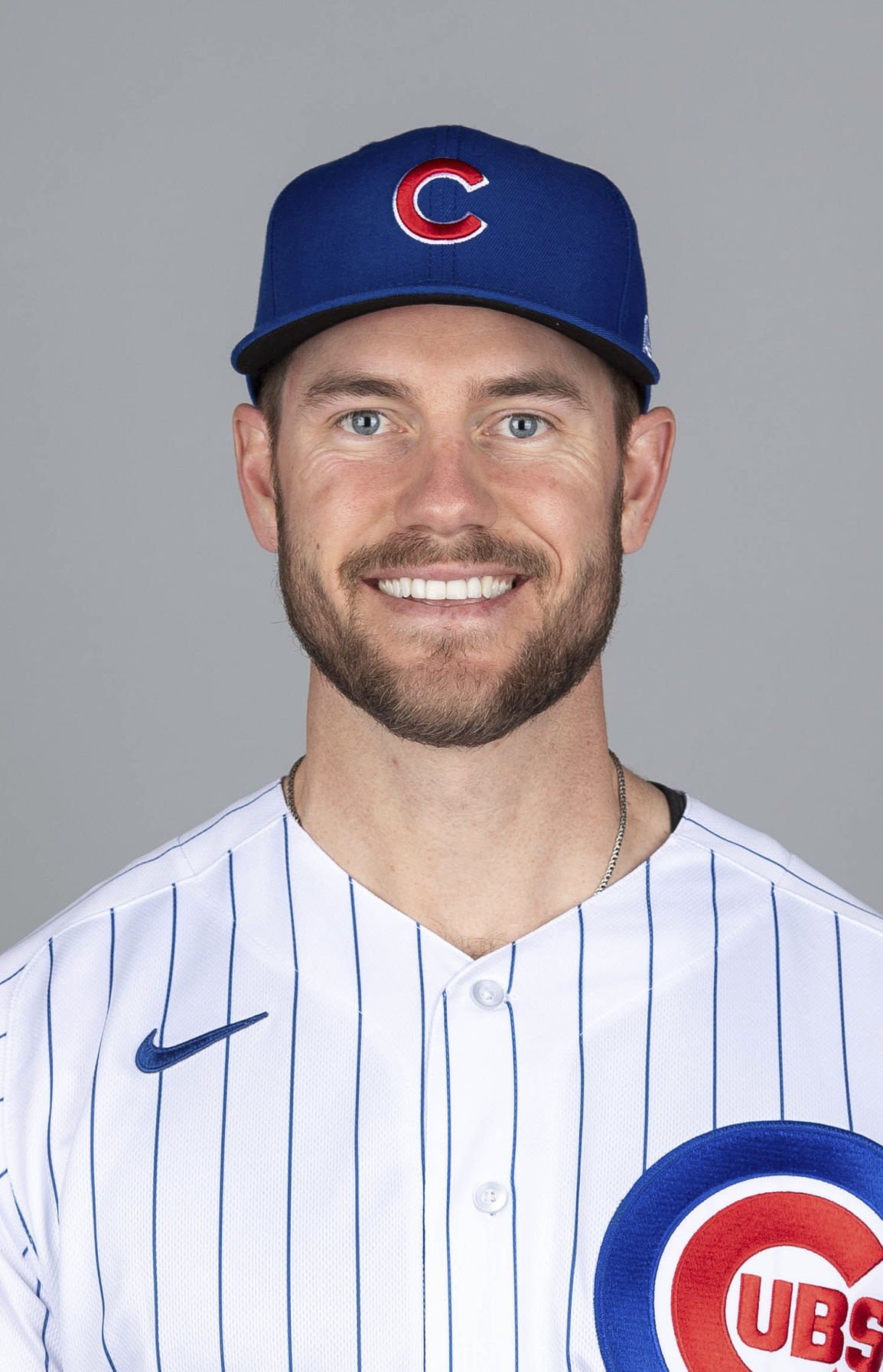