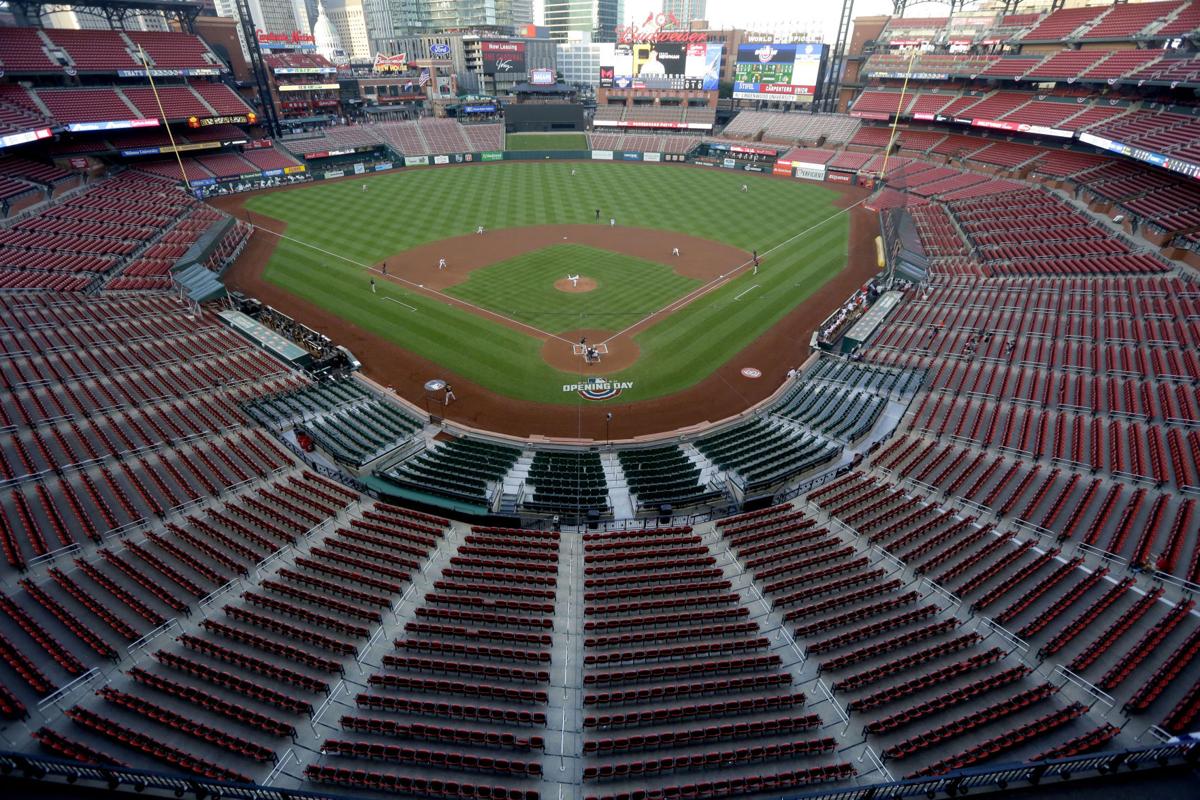 In this July 24, 2020, file photo, empty seats are viewed in Busch Stadium as St. Louis Cardinals starting pitcher Jack Flaherty throws in the first inning against the Pittsburgh Pirates in St. Louis.

NEW YORK — Seven-inning doubleheaders and runners on second base to start extra innings will return for a second straight season under an agreement for 2021 health protocols reached Monday between Major League Baseball and the players' association.

The deal did not include last year’s experimental rule to extend the designated hitter to the National League or expanded playoffs. After allowing 16 teams in the postseason last year instead of 10, MLB had proposed 14 for this year before withdrawing that plan last month.

Last year’s expanded playoffs agreement did not come together until hours before the season’s first pitch.

“We’re comfortable with both rules,” San Francisco Giants manager Gabe Kapler wrote in a text to the AP. “It seems like most were good with them in ’20, and with a year of familiarity under our belts, we’ll tackle them fine.”

There were 78 extra-inning games last year, and the longest by innings were a pair of 13-inning contests at Houston, won by the Los Angeles Dodgers on July 29 and by Oakland on Aug. 7. Every previous season since 1901 had at least one game of 15 innings or longer.

“During a season with the possible delays from COVID, I think the seven-inning and runner on second rules will help any teams make up for lost time,” Arizona catcher Stephen Vogt wrote in a text to The Associated Press. “I would love to get back to traditional baseball ASAP, but I like them for the 2021 season.”

There were 45 games postponed for COVID-19-related reasons and just two were not made up, between St. Louis and Detroit. In order to accomplish that, there were 56 doubleheaders, the most since 76 in 1984. About 12% of games were part of doubleheaders, the highest percentage since 13.6 in 1978.

“I actually liked both the seven-inning doubleheaders and the runner on second,” Oakland manager Bob Melvin wrote in a text to the AP. “I was skeptical at first, but they both were successful in my opinion.”

Houston Astros manager Dusty Baker agrees with keeping the experiment because it “saves pitching” during the pandemic.

“I don’t mind either rule,” Baker said in a text to the AP. “Besides, what are you gonna do?”

The agreement includes more sophisticated contact tracing for COVID-19 that includes the use of technology, and more league rules on behavior to comply with coronavirus protocols.

Spring training opens Feb. 17 and the season starts April 1. The union last week rejected MLB's proposal to delay spring training and opening day until April 28, a plan that would have led to a compressed schedule of 154 games per team instead of the usual 162.

The extended DH was included in last year’s health and safety protocols. MLB would not include it in this year’s after the union rejected the proposal for a delay in the season that included the DH being used again in the NL.

Last season's start was delayed from March 26 to July 23 because of the pandemic, and each team's schedule was cut to 60 games.

With a retractable roof on American Family Field, the team remains hopeful of allowing fans for the April 1 home opener.

The Athletic was the first to report that ex-Cardinals second baseman Kolten Wong has agreed to a two-year, $18 million deal with Milwaukee.

Major League Baseball will proceed with an on-time start to spring training and the season after players rejected a plan Monday night to delay reporting by a more than a month.

Major League Baseball has proposed a one-month delay in starting spring training due to the COVID-19 pandemic, pushing back opening day to April 28, and cutting the regular season to 154 games.

The St. Louis Cardinals have agreed to acquire All-Star third baseman Nolan Arenado from the Colorado Rockies in a trade needing approvals before it can be finalized, a person familiar with the swap tells The Associated Press.

Sara Goodrum has been promoted to minor league hitting coordinator by the Milwaukee Brewers, apparently making her the first woman to have that role in any Major League Baseball organization.

Light-hitting Luis Urias appears to be the best option, but Brewers GM David Stearns is likely still evaluating his options for making an upgrade.

At long last, baseball is back.

Craig Counsell counting on Brewers hitters bouncing back in 2021

The Brewers scored 4.1 runs per game to rank 27th out of 30 MLB teams last year as they slipped into the playoffs with a 29-31 record.

Brewers by position: Bullpen shaping up to be 'a strength of the team' as questions over roles remain

During his five-plus years as manager of the Milwaukee Brewers, Craig Counsell has had the benefit of working with some of the best relief cor…

First impressions can often be deceiving and for proof, look no further than Milwaukee Brewers catcher Omar Narvaez.

Brewers by position: Move to first base will put Keston Hiura's defensive abilities to the test

There's nothing easy about playing first base, as Brent Jennings, playing the role of Oakland Athletics coach Ron Washington explained to Chri…

For a while, life could not have been better for Travis Shaw.

In this July 24, 2020, file photo, empty seats are viewed in Busch Stadium as St. Louis Cardinals starting pitcher Jack Flaherty throws in the first inning against the Pittsburgh Pirates in St. Louis.