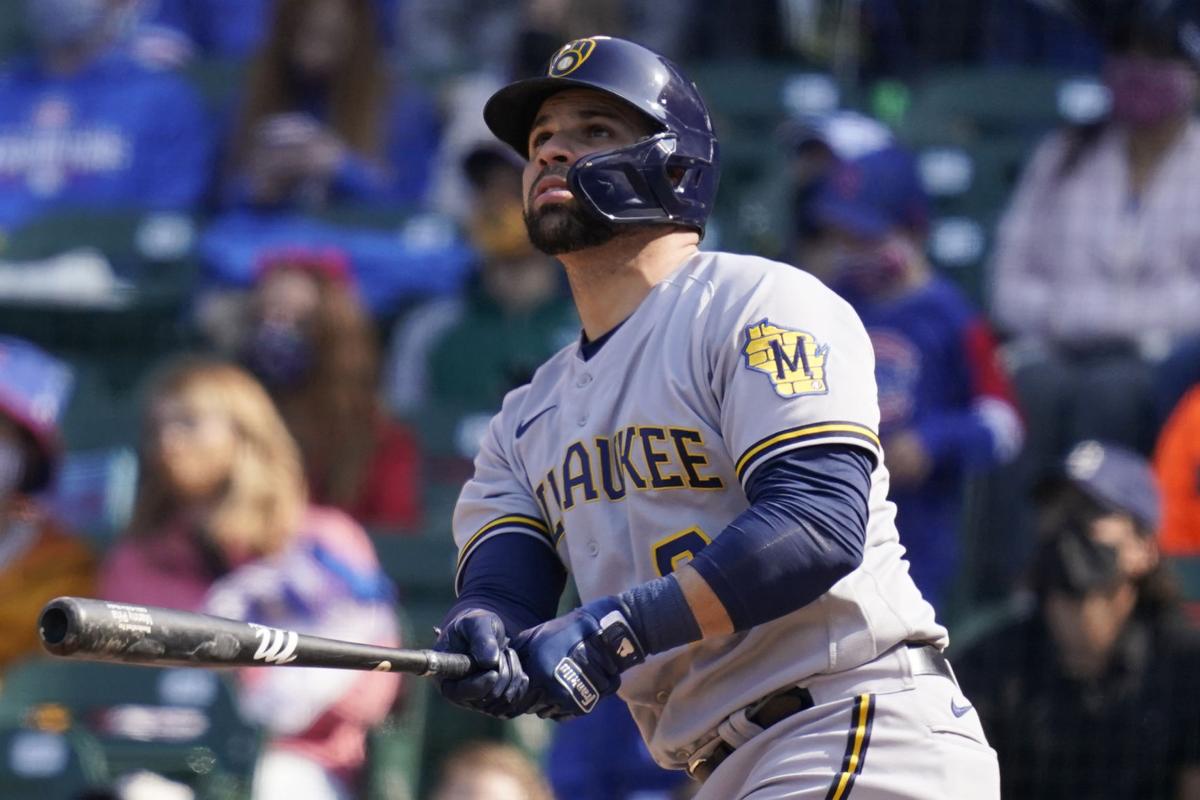 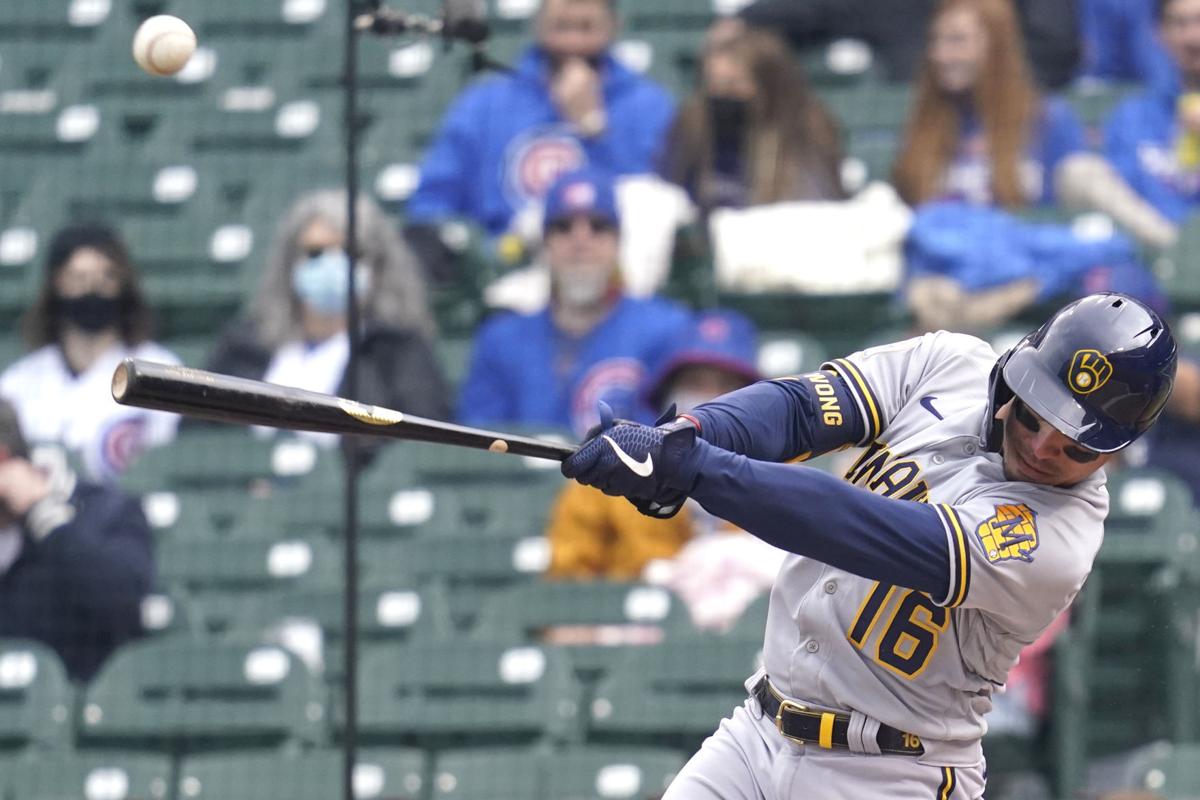 CHICAGO — Manny Piña wouldn’t have been surprised if Milwaukee Brewers manager Craig Counsell had chosen a different player to pinch hit in the seventh inning Saturday.

“Sometimes the manager doesn’t want to use the backup catcher in that situation,” Piña said. “But that was good for him today to think Manny was the right guy to change the game.”

Piña connected for a tiebreaking two-run homer in the seventh inning and the Brewers held off the Chicago Cubs for a 4-3 victory at Wrigley Field.

Brent Suter (2-1) pitched two scoreless innings in relief of Freddy Peralta, helping Milwaukee improve to 4-1 on its six-game trip. Josh Hader got three outs for his fourth save in as many opportunities, working around a leadoff walk.

Keston Hiura had three hits and Kolten Wong finished with two as the Brewers bounced back from a 15-2 loss in the series opener Friday.

“Yesterday had already passed and we came here this morning to keep fighting,” Piña said.

Cubs manager David Ross was ejected by plate umpire Corey Blaser in the ninth following a strike one call on Jake Marisnick with a runner on first and none out. Marisnick struck out on three pitches.

“That looked extremely high,” Ross said. “That was a bad call. I mean, plain and simple.”

Jason Heyward homered for Chicago, which had won four in a row. Eric Sogard had three hits.

The Cubs jumped in front on Nico Hoerner’s two-run double in the second. After a shaky start, Adbert Alzolay retired 12 in a row.

Hiura broke up Alzolay’s streak with a leadoff double in the fifth. Making his major league debut in his hometown of Chicago, pinch hitter Corey Ray walked with two out to put runners on the corners.

Ross then brought in left-hander Rex Brothers, who walked Wong and Omar Narváez to force in a run. Brothers also hit Tyrone Taylor in the foot to force in another run, tying it at 2.

Counsell credited the walk by Ray, selected fifth overall in the 2015 draft, for sparking the rally.

“The biggest part, we got Brothers in the game,” Counsell said. “That was probably earlier than they wanted and it turned the game for us.”

Piña’s blast with one out in the seventh off Andrew Chafin (0-1) put the Brewers on top. Piña’s second homer of the season and third career pinch homer drove in Wong, who led off with a single.

Heyward went deep against Devin Williams with two out in the eighth.

The last time Brandon Woodruff faced the Cubs on April 13, Chicago’s Ryan Tepera admitted he threw behind Woodruff as retaliation for the right-hander hitting Willson Contreras earlier in the game.

Woodruff is schedduled to face the Cubs again in the finale of the three-game series, but said Saturday he’s not thinking about the incident.

“I knew the questions would come, but I’ve put it behind me,” he said. “I’m focused on going out and competing and doing my job.”

Counsell didn't offer a timetable for Anderson's return and said it's still not set who will replace him in the rotation.

The Cubs optioned left-hander Kyle Ryan to their alternate site to make room for Alzolay.

Brewers outfielder Christian Yelich (lower back) was eligible to be activated from the 10-day injured list on Saturday but instead was sent back to Milwaukee for an MRI.

“Nothing happened yesterday,” Counsell said. “We’re just at a plateau, and so we’re just trying to rule everything out and see if we can get any new ... piece of information.”

Yelich hasn't played since April 11. The Brewers placed him on the injured list April 17, with the move retroactive to April 14.

He is batting .333 with one homer and six RBIs in nine games this season.

The Brewers also have been missing center fielder Lorenzo Cain, who went on the injured list April 14 with a quadriceps strain. Counsell said Cain would hit on the field Saturday and it "could be a stepping-stone day for him."

"Running at full speed is going to be the last thing you conquer during this," Counsell said. "He hasn't been on the field hitting yet. We're putting him out there today. That's progress."

Milwaukee swept a series in San Diego this week without Yelich and Cain thanks to the play of some reserves.

Woodruff (1-0, 1.96 ERA) faces the Cubs for the third time this season. The righty has two no-decisions in the previous starts, allowing one run in 13 innings. Right-hander Jake Arrieta (3-1, 2.86 ERA) is scheduled to start for Chicago on Sunday.