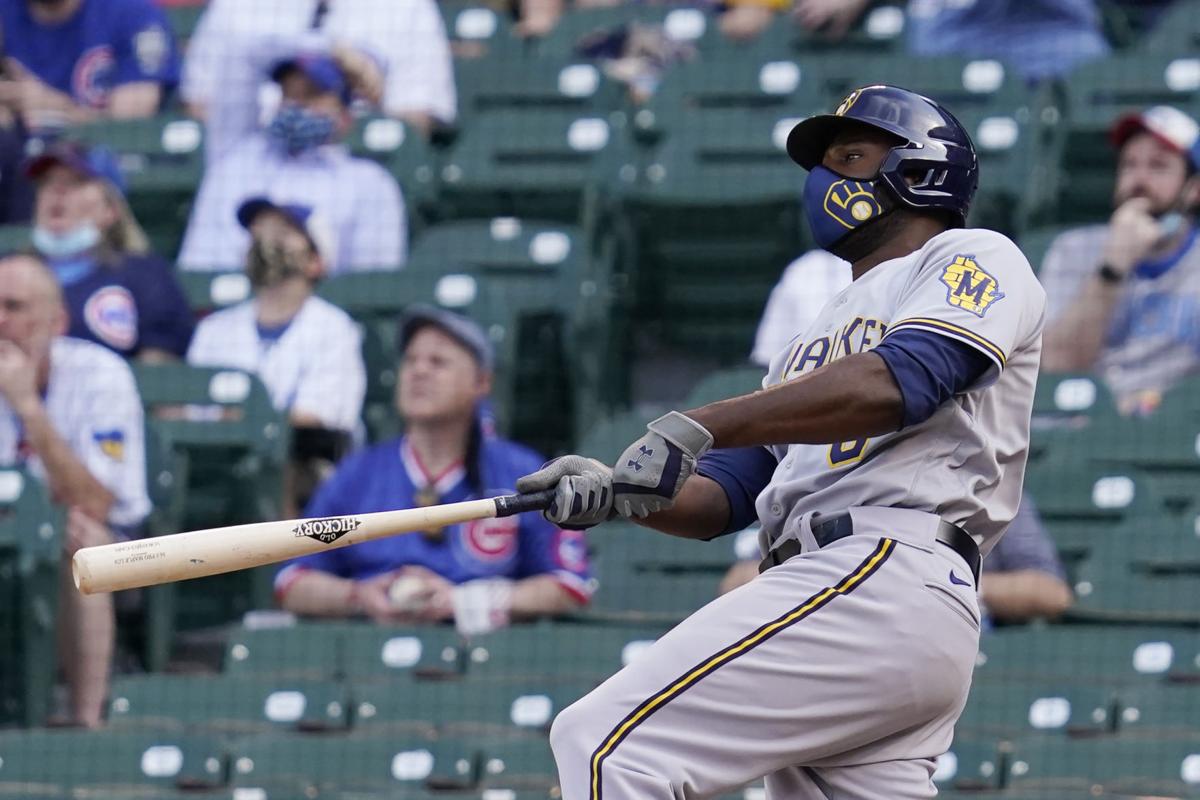 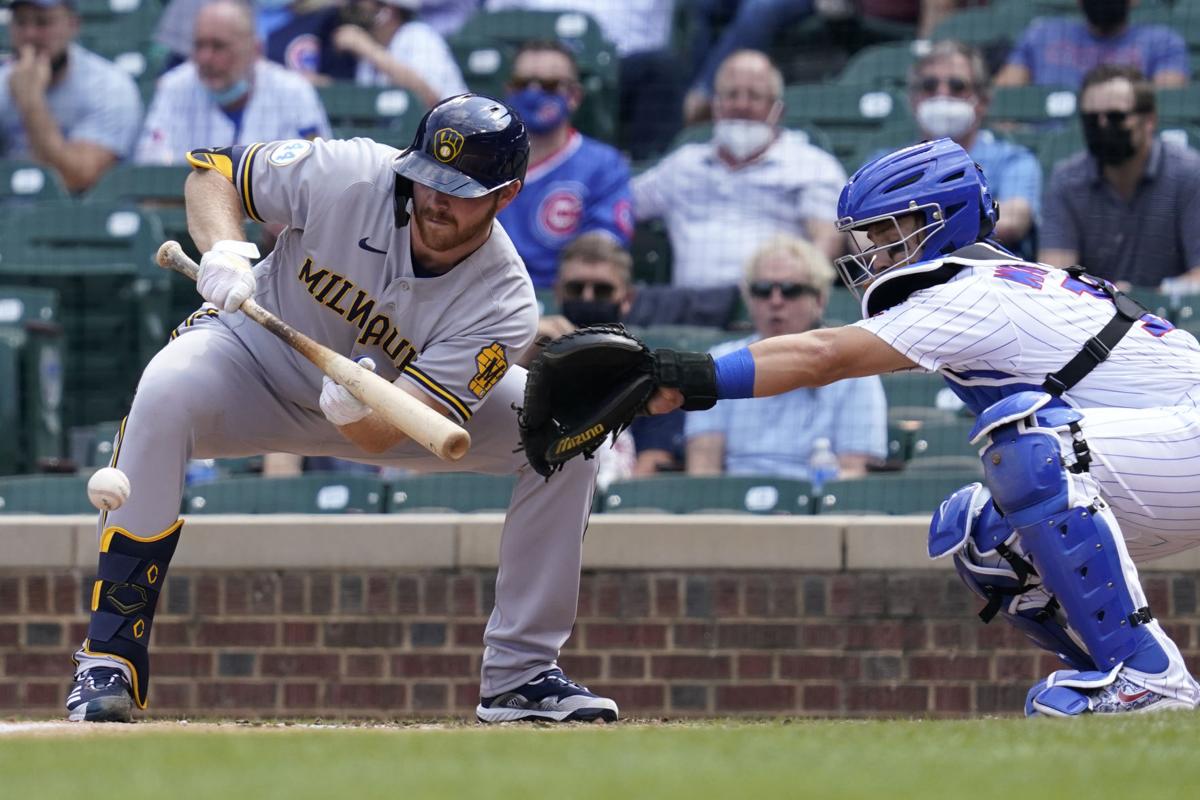 Brewers pitcher Brandon Woodruff lays down a sacrifice bunt during the fifth inning. He struck out eight in seven innings.

CHICAGO — Lorenzo Cain hit his second homer of the game, a three-run shot in the 10th inning and the Milwaukee Brewers beat the Chicago Cubs 4-2 on Wednesday.

Brewers starter Brandon Woodruff had a no-hit bid going until Ian Happ led off the seventh with a clean single. It was scoreless until then — after that, the ball began to fly.

Cain, who had missed three games with an oblique strain, hit a solo homer leading off the eighth. Joc Pederson tied it with his first home run — and first hit — for the Cubs, a drive in the bottom half off reliever Devin Williams.

After automatic runner Daniel Robertson moved to third on a single by pinch hitter Daniel Vogelbach in the 10th, Cain drove a 1-1 pitch from Brandon Workman (0-1) to the center-field batter’s eye on a warm afternoon at Wrigley Field.

“You’re always happy to pull out a win, especially the way Woody pitched,” said Cain, who had his sixth career multi-homer game and first since June 2017. “I’m still not where I want to be as far as my timing. I’m still trying to get back to my old form, but today was a good day.”

Cain, a two-time All-Star who turns 35 next week, played five games last season before opting out Aug. 1 because of coronavirus concerns.

Jason Heyward singled in automatic runner Kris Bryant in the Cubs’ 10th off J.P Feyereisen. After two walks loaded the bases, Brad Boxberger came on to retire Happ on a fly to short left for the final out and his first save.

Woodruff permitted just one hit, struck out eight and walked none in seven innings.

“He was just locked in with everything,” manager Craig Counsell said.

Woodruff was consistently ahead on counts and threw just 74 pitches. Still, he said he was starting to run out of steam when Counsell replaced him with Williams to start the eighth.

“I think that was the right move,” Woodruff said. “I was starting to lose myself in the delivery a little there. In the future, if I can get through seven (innings) on 74 pitches, they’ll have to pretty much rip me off the mound.”

Josh Hader (2-0) pitched a scoreless ninth for the win.

Christian Yelich had three hits, including a double, and walked for Milwaukee.

The Cubs finished with only three hits after getting just one in a 4-0 loss to the Brewers on Tuesday night.

Pederson was happy to get one of the them and have it be big. He’s now 1-for-17 after signing a one-year deal with Chicago.

“It was a big relief just to get on the board, and at a time to tie the game up and give ourselves a chance to win,” Pederson said.

Hendricks rebounded from a shaky Opening Day start when he allowed three runs in three innings.

‘It felt a lot better to be honest with you, kind of from the start, from the first pitch,” he said. “Definitely on the right track.”

The Brewers became the first team with two no-hit bids of six-plus innings in the first six games of a season since the 1990 Padres. Right-hander Corbin Burnes didn’t allow a hit through the first six innings against Minnesota on Saturday, a game the Twins won 2-0.

Brewers second baseman Kolten Wong was held out of the starting lineup with an oblique strain, but entered in the eighth as a defensive replacement. Robertson started at second in Wong’s place, then moved to third in the eighth.

The Brewers said Wednesday they’d been cleared by the City of Milwaukee Health Department to allow tailgating outside American Family Field beginning with the team’s next home game on Monday night against the Cubs. The city had placed a temporary ban on the pregame parking lot practice when it approved 25% capacity at the ballpark to begin the season.

“Obviously, one of the priorities for our organization was to try to bring a sense of normalcy back to our game experience, and Brewers games without tailgating felt like there was something awry in the universe,” Brewers president of business operations Rick Schlesinger said. “This is a step in the right direction.”

Some pandemic policies remain in place in the parking lots, however. Tailgating will be allowed at single vehicles for those sitting in the same seating pod. Fans will need to remain in the immediate vicinity of their vehicle.

Brewers pitcher Brandon Woodruff lays down a sacrifice bunt during the fifth inning. He struck out eight in seven innings.