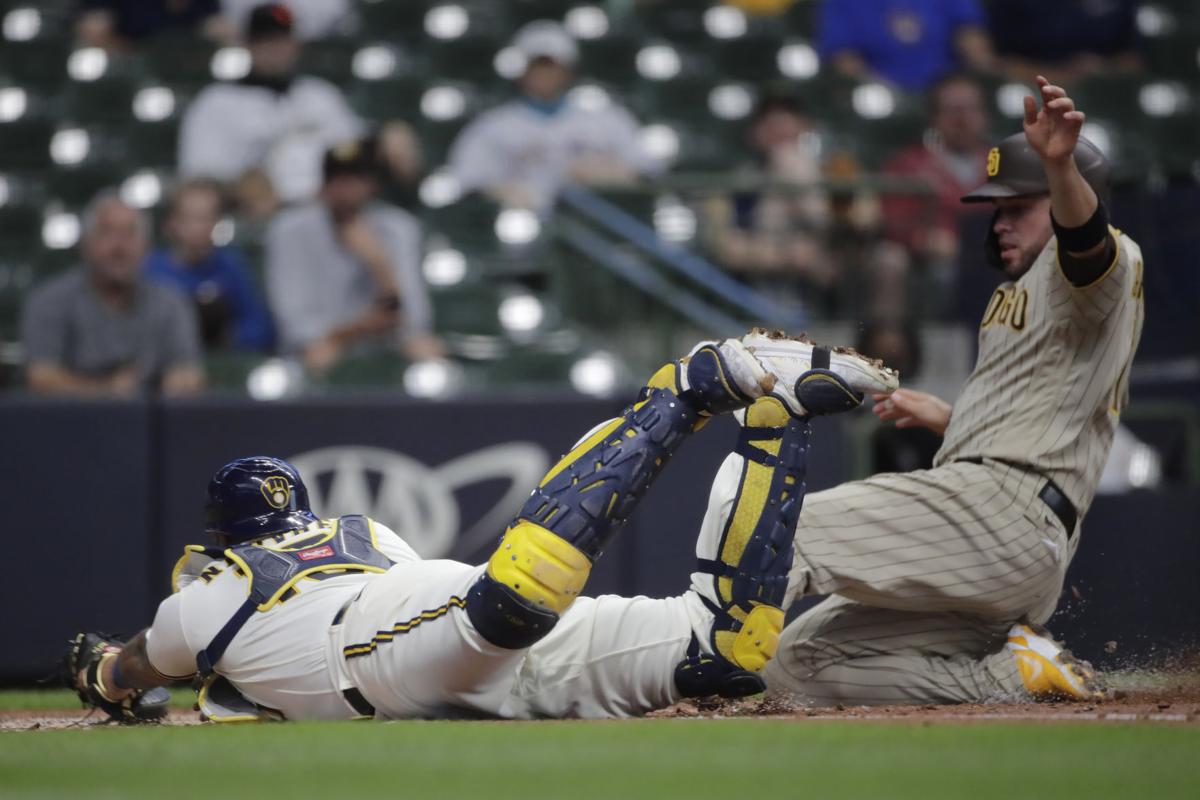 Padres' Victor Caratini slides safely past the tag of Brewers' Omar Narvaez on his steal of home in the third inning Tuesday night. 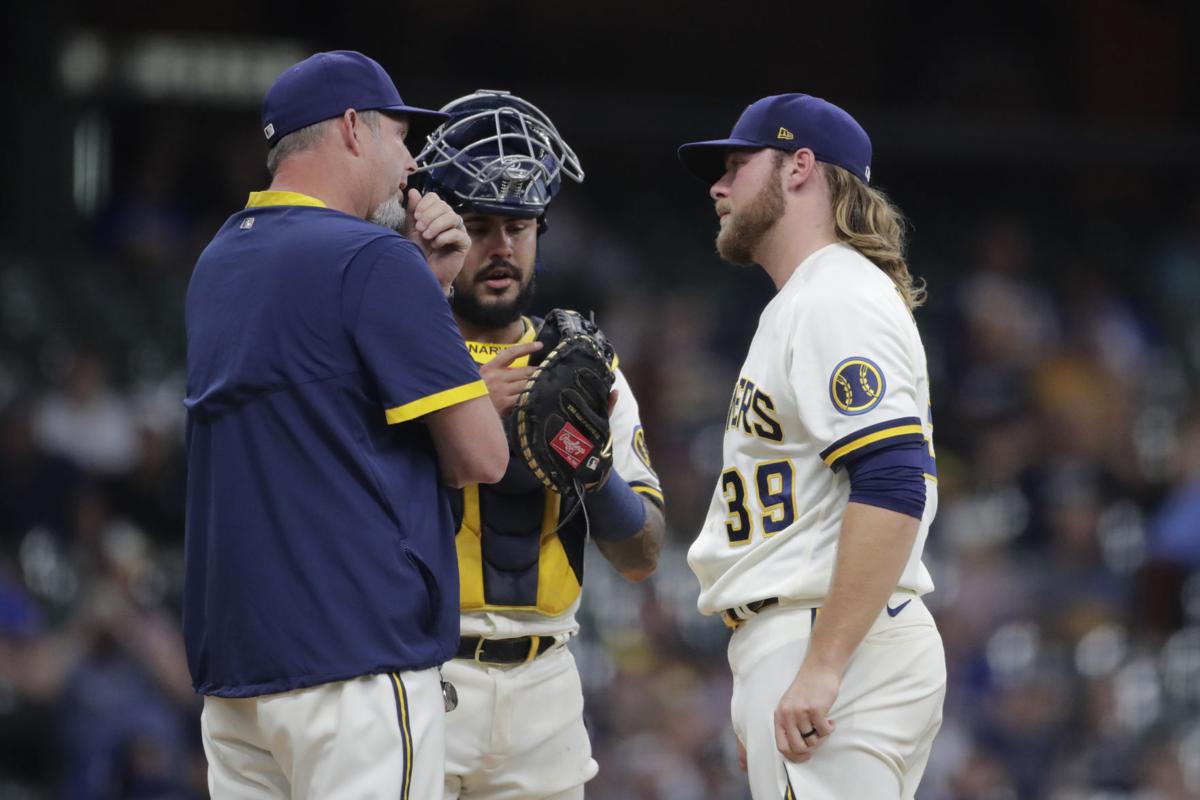 Brewers pitcher Corbin Burnes talks with pitching coach Chris Hook and catcher Omar Narvaez during the third inning. The Padres scored twice in the inning on a walk, hit batter, error and single.

San Diego ran like crazy on a night when Burnes (2-4) was uncharacteristically wild and scored four runs against the right-hander in six innings, spiking his ERA from 1.79 to 2.33.

“With Burnes on the mound, you’re probably not banking on 10, 12, 14 hits,” Padres manager Jayce Tingler said. “And, so when you’re able to get on, being able to do some things and create some opportunities, and that’s what our guys did tonight.

“I thought the baserunning was one of the separators in the game and our guys were outstanding tonight in being aggressive and going for some things.”

Burnes, who opened the season with a record 58 strikeouts before issuing a walk, issued three free passes, hit a batter and threw a wild pitch.

Five of San Diego’s stolen bases came with Burnes on the mound. The Padres are the only team to steal six bases in a game this season and have done it twice. No team has had seven steals since Washington against the Chicago Cubs on June 27, 2017.

“Just kind of weird funk there in the third and the sixth obviously to put three guys on and hit a guy,” Burnes said. “Outside those innings, I threw the ball really well. They’re a good team. I gave them four baserunners, they all scored.”

Musgrove, who pitched a no-hitter April 9 vs. Texas, did not allow a hit until Lorenzo Cain’s one-out single in the fifth, but he couldn’t finish the inning. Tim Hill (3-2) relieved with the bases loaded and got the final out, then threw a perfect sixth.

San Diego’s Victor Caratini drew a four-pitch walk against Burnes to open the third, and Kim Ha-seong was hit by a pitch. Caratini took third on a one-out flyout to center and scored on a double steal, with Kim continuing to third on an error by catcher Omar Narvaez.

Jurickson Profar followed with an RBI single through the right side.

“Vic’s not the fastest player on our team, by any means, but it takes a perfect catch at second, a perfect spin throw to home, and a good accurate throw to get him out,” Musgrove said. “One of those things misses, we get a run out of it and I get an early 1-0 lead, so it’s huge.”

San Diego added two more in the sixth on one hit. Tommy Pham walked to open, stole second and took third on a wild pitch. Profar walked and stole second. Pham scored on a sacrifice fly to center by Fernando Tatis Jr. and Eric Hosmer followed with an RBI single.

The Padres added two runs on three hits in the seventh off Eric Yardley, activated off the injured list earlier Wednesday.

San Diego scored another run in the eighth without a hit when Tatis walked, stole second, took third on a ground out and scored on a wild pitch.

After allowing Cain’s single in the fifth, Musgrove hit Shaw with a pitch and walked Burnes to load the bases with two outs, ending his 84-pitch outing. Hill relieved and enticed Kolten Wong into a ground-ball force at second.

“I would have loved to have a chance to fight for one more out and get a ‘W,’ but I talked to skip after the game, and I think it was probably the right move,” Musgrove said. “I had my chance with Burnes there, and I kind of blew that.”

Outfielder Tyrone Taylor was optioned to Class AAA Nashville. Infielder Jack Hager was claimed off waivers from the New York Mets and assigned to Nashville. Outfielder Billy McKinney, designated for assignment on Saturday, was traded to the Mets for minor league left-hander Pedro Quintana, it was announced after the game.

Left-hander Eric Lauer (1-1, 2.81 ERA) will be recalled from Nashville and start for the Brewers on Wednesday. Lauer struck out 12 in five innings in his last start at Class AAA. Right-hander Chris Paddack (2-3, 3.98) starts for San Diego.

Brandon Woodruff tossed seven shutout innings against a Padres team that had won 12 of 13, before San Diego scored three runs off the bullpen in the ninth.

Daniel Robertson hit his first home run in more than two years, a tiebreaking, seventh-inning drive in his second game back from a concussion, as Milwaukee beat Cincinnati 4-3 on Saturday.

Milwaukee went 1-for-10 with runners in scoring position and had the tying run thrown out at the plate in the 10th inning.

Jackie Bradley Jr.’s two-out shot off the right-field wall brought home Omar Narváez to give Milwaukee a 6-5 victory over the San Diego Padres on Thursday at American Family Field.

The series opener between the Milwaukee Brewers and Washington Nationals on Friday night was postponed because of inclement weather.

Freddy Peralta strikes out seven in the opener. Milwaukee collects 12 hits in the nightcap.

Padres' Victor Caratini slides safely past the tag of Brewers' Omar Narvaez on his steal of home in the third inning Tuesday night.

Brewers pitcher Corbin Burnes talks with pitching coach Chris Hook and catcher Omar Narvaez during the third inning. The Padres scored twice in the inning on a walk, hit batter, error and single.