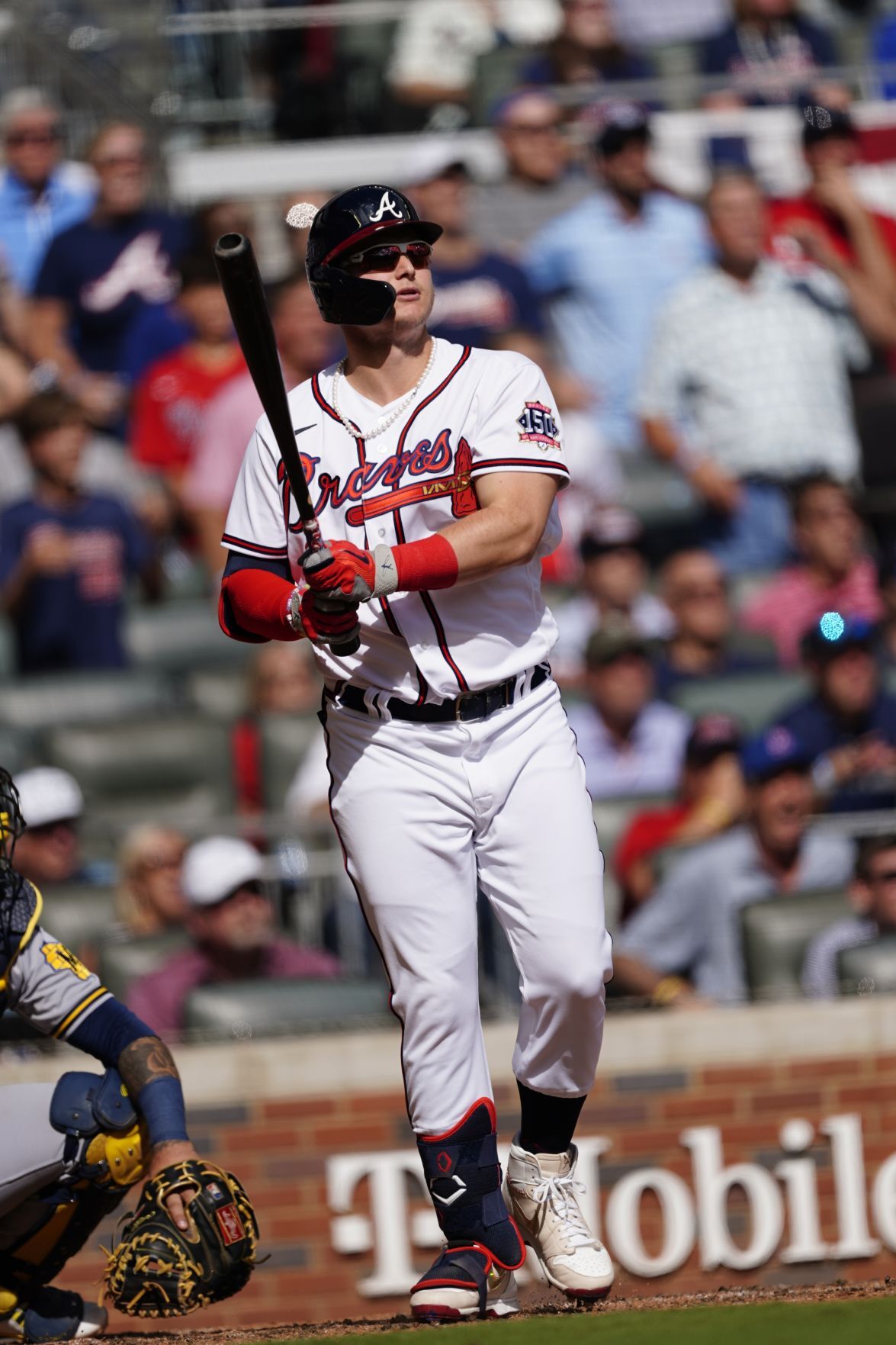 Braves' Joc Pederson admires his three-run home run off Brewers' Adrian Houser during the fifth inning Monday at Truist Field. Pederson is 3-for-3 with two homers as a pinch hitter in the series. 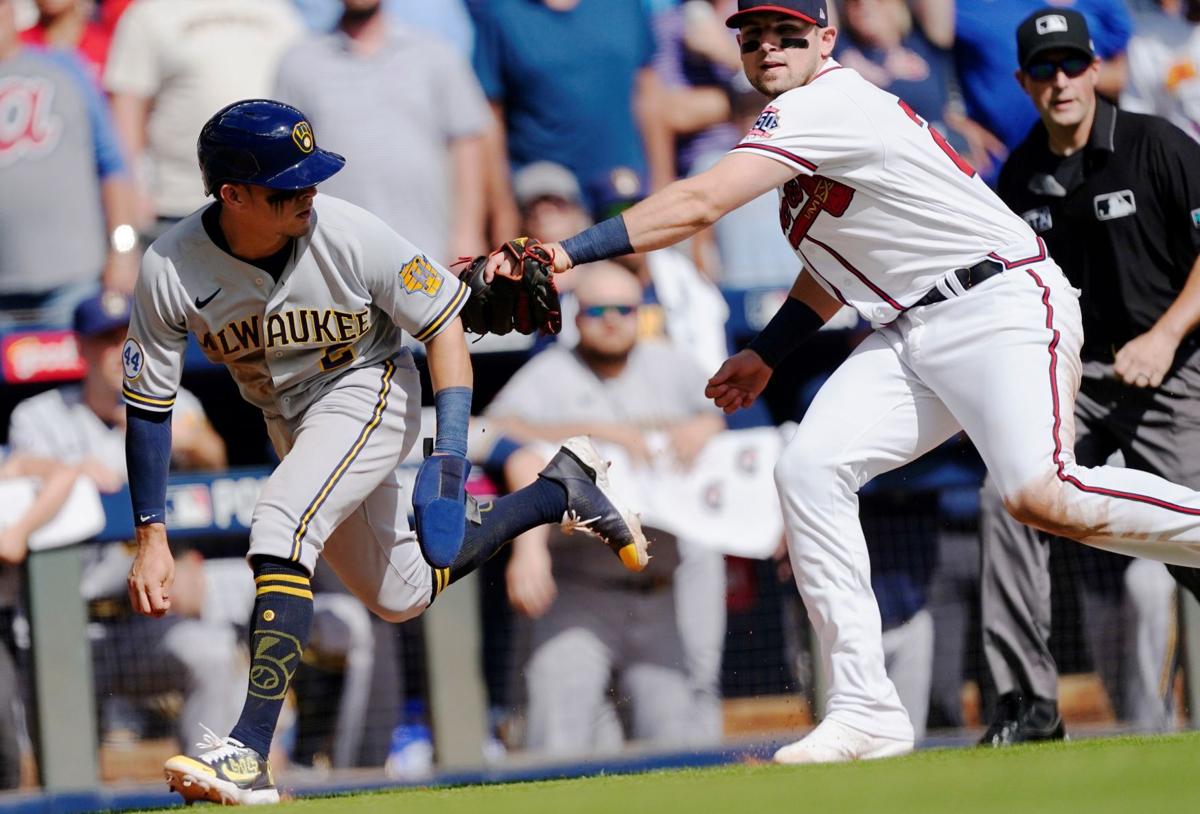 Brewers' Luis Urias is tagged out by Braves' Austin Riley after he was caught in a rundown between third base and home plate during the fifth inning.

ATLANTA — Joc Pederson credits his postseason success to “not making any moment bigger than it needs to be.”

With another jolt, Pederson put the Atlanta Braves on the verge of advancing in the playoffs.

Pederson kept enhancing his “Joctober” nickname with a three-run, pinch-hit homer and the Braves shut down Milwaukee once again, beating the Brewers 3-0 on Monday to take a 2-1 edge in the NL Division Series.

“It was pretty special,” Pederson said of the fifth-inning drive. “To come up big in a moment like that was pretty cool.”

In a matchup dominated by pitching, Ian Anderson and the Braves bullpen combined on a five-hitter and won by a 3-0 score for the second straight game.

Pederson’s homer was his second of the series, both as a pinch hitter against Adrian Houser. Pederson singled as a pinch hitter in his only other at-bat in this series, and has driven in four of Atlanta’s seven runs.

Pederson has hit 11 postseason home runs overall and helped the Los Angeles Dodgers win the World Series last year with his longballs. He then signed as a free agent with the Chicago Cubs in the winter and was traded to Atlanta in July.

“He’s been in the big moment, the big stage, and he’s performed and guys appreciate that,” Braves manager Brian Snitker said.

Since winning the opening game of the series, the NL Central champion Brewers have not scored in 19 consecutive innings. They were 0-for-8 with runners in scoring position in this loss.

Asked about the poorly timed offensive slump, manager Craig Counsell said, “We’re in it. I thought we swung the bats better today. ... We’ve got to catch a break, frankly.”

Anderson was dominant for the NL East champion Braves, allowing three hits over five innings with no walks and six strikeouts. Will Smith, the fourth Braves reliever, pitched a perfect ninth for his second save of the series.

Milwaukee starter Freddy Peralta pitched four scoreless innings and was pulled for a pinch hitter when the Brewers threatened in the fifth.

Houser gave up singles to Travis d’Arnaud and Swanson to open the fifth. Pederson, hitting for Anderson, pulled a high, inside fastball deep into the right-field seats for a 3-0 lead.

“It didn’t look like a bad pitch to me, but give him credit,” Counsell said.

Asked how he pulled the high pitch for the homer, Pederson shrugged and said, “I guess I’m a pretty good player, I don’t know. I knocked it out of the yard.”

Adam Duvall made a crucial baserunning mistake when he tried to advance from first to second as Austin Riley tried to score from third on d’Arnaud’s flyball in the second. Left fielder Christian Yelich nailed Duvall for the third out before Riley crossed the plate, costing Atlanta a run.

Brewers center fielder Cain, running at full speed, crashed into the wire fence as he tried to catch Duvall’s drive in the fourth. Cain held the ball in his glove before hitting the ground and losing control. Cain stayed down as Duvall raced to third with the two-out triple.

Cain remained in the game after a visit from Counsell and a trainer. Peralta struck out Eddie Rosario to end the inning.

“He was fortunate he just jammed his shoulder,” Counsell said. “It’s probably going to be a little sore tomorrow, but I’m optimistic.”

Following the game, Snitker and Counsell would not announce starting pitchers for Game 4 on Tuesday.

Snitker said “everybody is in play” including Game 1 starter Charlie Morton, who would be pitching on short rest.

A possible option for the Brewers is left-hander Eric Lauer. Counsell said his Game 1 starter, Corbin Burnes, would not be his choice.

Watch now: 5 plays too costly for the Brewers to overcome as the Braves earned their second straight win

Milwaukee had put only one runner in scoring position through four innings against Braves starter Ian Anderson but found itself in a perfect situation when Luis Urias reached on an catcher's interference to open the fifth and moved to third when Omar Narvaez followed with a double.

It looked like the Brewers might finally snap out of their funk when Lorenzo Cain came up and hit a rocket that came off his bat at 101 MPH, according to Statcast, but unfortunately for the Brewers, Braves shortstop Dansby Swanson was able to snare it and throw to first in plenty of time to catch Cain for the first out of the inning.

Later in the inning, Counsell gambled by pulling Freddy Peralta after four scoreless innings in favor of pinch-hitter Daniel Vogelbach. Vogelbach laid off a pair of curveballs to get ahead, 2-0, then looked at a 93 MPH fastball for strike one. After Vogelbach fouled off an 88 MPH changeup to even the count, Anderson came back with a fastball that left Vogelbach's bat at 99 MPH but right at third baseman Austin Riley who threw home and caught Urias in a rundown.

Milwaukee had one more chance in the inning when Kolten Wong came up with two out. He also worked the count full and when Anderson left a curveball up over the middle of the plate, Wong was ready. It left his bat at 101 MPH but like the two previous batters, the ball shot right at a Braves defender — in this case, first baseman Freddie Freeman who barely moved his feet to get Anderson out of the inning.

Pinch-hitting for Rowdy Tellez, Eduardo Escobar led off the seventh inning with a double to the wall in left-center and Urias had a chance to redeem himself for his earlier gaffes when he connected on an 0-2 fastball from left-hander Tyler Matzek, a Brewers nemesis this series. Despite coming off his bat at 99 MPH, it shot right at third baseman Austin Riley who made an easy throw to first to retire Urias. Matzek retired Omar Narvaez on a fly ball to center then struck out Cain to leave Escobar stranded.

Jace Peterson led off the eighth inning with a four-pitch walk against Braves reliever Luke Jackson and after Wong flew out to left, Willy Adames came back from 0-2 to work Jackson full then singled to center. That put runners at the corners for Christian Yelich, who sent an 86 MPH first-pitch slider right into the Braves' defensive shift for an inning-ending double play.

Yelich's ball had an exit velocity of 105 MPH, according to Statcast, making it the fourth-hardest hit ball of the game.

Milwaukee is 0-for-16 with runners in scoring position in the series, including eight more fruitless at-bats in Game 3.

The 25-year-old is well-rested, having not pitched since Sept. 26.

Milwaukee puts two runners on base in each of the final three innings but fails to get a big hit.

Milwaukee got great pitching from Corbin Burnes, a pair of defensive gems from catcher Omar Narvaez and a timely hit from Rowdy Tellez. The result was a win filled with stress.

"Every time he takes the mound, it's like for us it's a win," shortstop Willy Adames said.

Only seven players remain from the Brewers' 2018 NL Championship Series roster, a makeover that didn't require rebuilding years in between. David Stearns didn't tear it down to keep winning in Milwaukee.

Bats wake up, but Brewers eliminated after Josh Hader gives up homer to Braves' Freddie Freeman

Josh Hader gives up a tiebreaking solo shot to Freddie Freeman in the eighth inning as Milwaukee loses the NL Division Series in four games.

Freddie Freeman and the Atlanta Braves will get another chance to finish the job they came agonizingly close to achieving a year ago.

Milwaukee totaled six runs in the four-game series against the Braves and went scoreless in 33 of 36 innings.

Milwaukee Brewers president of baseball operations David Stearns says nobody has been able to figure out the cause of Christian Yelich’s hitting struggles over the past couple of seasons.

Braves' Joc Pederson admires his three-run home run off Brewers' Adrian Houser during the fifth inning Monday at Truist Field. Pederson is 3-for-3 with two homers as a pinch hitter in the series.

Brewers' Luis Urias is tagged out by Braves' Austin Riley after he was caught in a rundown between third base and home plate during the fifth inning.