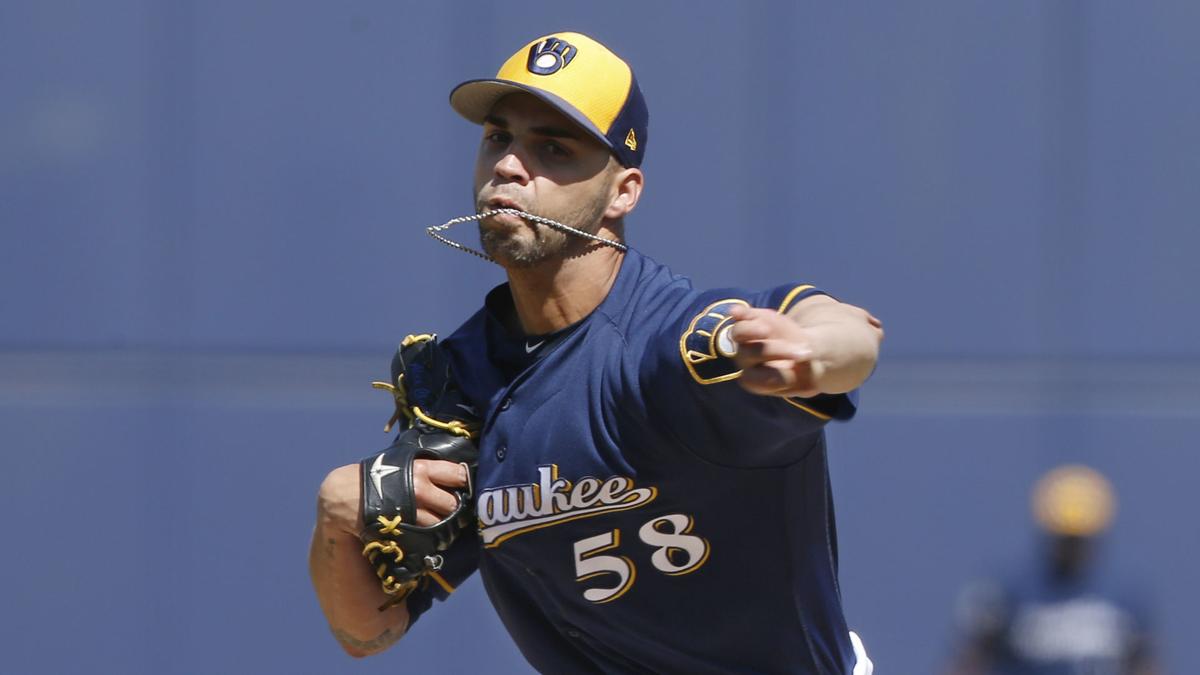 Alex Claudio pitches with the Milwaukee Brewers during the 2019 season.

Claudio has appeared in 239 games over the past four seasons with Texas and Milwaukee, third most by a pitcher in the majors during that stretch. He led the sport in 2019 with 83 appearances for the Brewers, tying their franchise record.

“Having a quality lefty is important, especially in our ballpark with a shorter right field,” new Angels general manager Perry Minasian said. “He has the ability to keep the ball in the ballpark against the opposite side, which is really important. From a mentality and a makeup side, one of the things we’re looking for is competitive guys, and this is as competitive a guy as you’ll see.”

Claudio is 15-8 with 13 saves and a 3.44 ERA in his major league career, which began with the Rangers in 2014. He is particularly effective against left-handed batters, who have a .202 career average against him, but he also managed to be effective last season even after the implementation of the major league rule requiring relievers to face at least three batters.

Claudio is the latest addition by Minasian in his strategy to patch the Angels' leaky bullpen, which struggled again last season. Los Angeles blew 14 of its 26 save opportunities, tied for the most in the majors, with a bullpen that had a 4.63 ERA.

Los Angeles has retained its three busiest relievers from last season — Mike Mayers, Félix Peña and Ty Buttrey — but has cut ties with the next eight most-used relievers on last season's roster.

“We’re better than we were entering the offseason, especially after the tender deadline,” Minasian said. “I think we’ve improved. Are we done yet? I think we’re still exploring ways to improve.”

Minasian is also still shopping for starting pitchers after the Angels had the 26th-best ERA in the majors last season at 5.09. Los Angeles remains in competition for NL Cy Young Award winner Trevor Bauer and other free agents to add to a rotation that includes Dylan Bundy, Andrew Heaney and Griffin Canning.

In 2020 alone, two of the greatest athletes in their respective sports — Giannis Antetokounmpo and Christian Yelich — joined Aaron Rodgers in signing long-term contract extensions that assure they will spend the prime years of their careers in Wisconsin.

Alex Claudio pitches with the Milwaukee Brewers during the 2019 season.