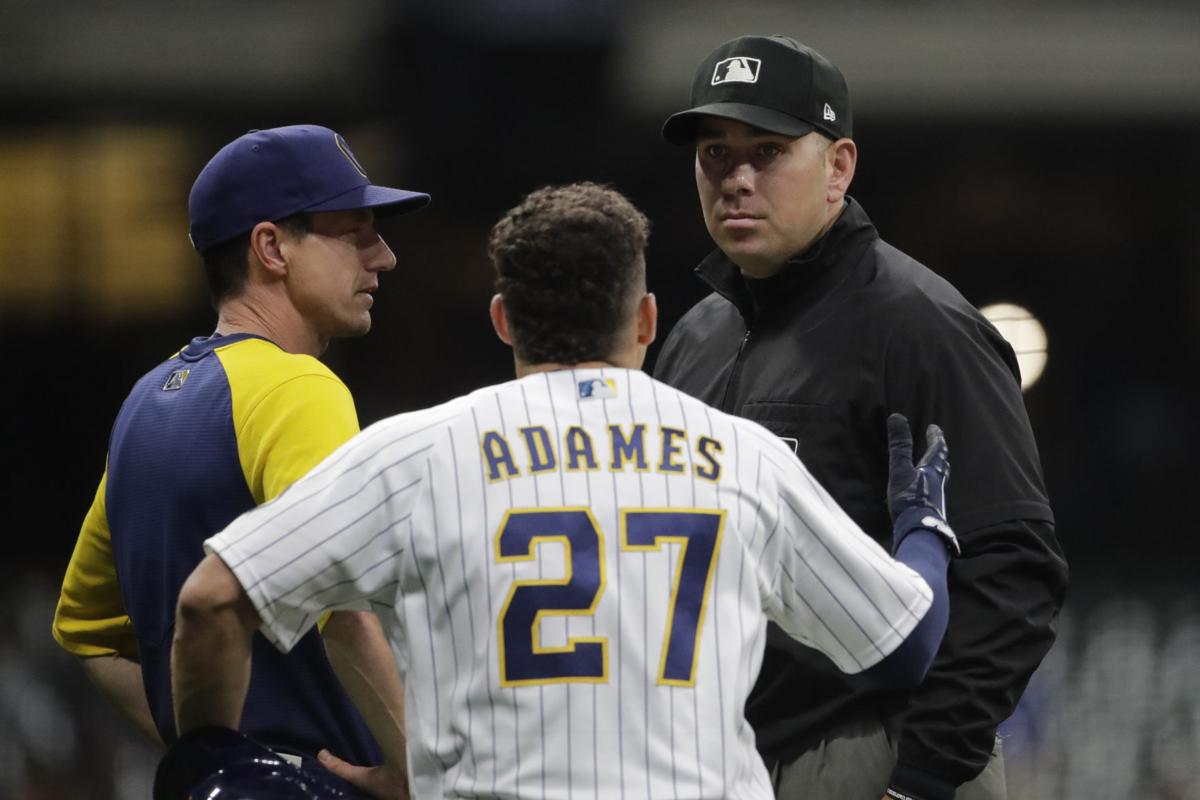 Brewers shortstop Willy Adames and manager Craig Counsell talk with umpire John Libka during the eighth inning. Adames was called out at second base for runner's interference.

MILWAUKEE — Wade Miley did a little bit of everything to make sure the Cincinnati Reds crept a little closer to the Milwaukee Brewers in the NL Central standings.

He threw eight shutout innings. He made a great defensive play to preserve the lead. He doubled and scored an insurance run.

“That’s a huge win for us,” Miley said. “That’s a big baseball game right there.”

This is the second of seven consecutive matchups between the Brewers and Reds. They’re playing a four-game series in Milwaukee this week and will meet again for a three-game set in Cincinnati immediately after the All-Star break.

The Brewers won the opener of this series 5-3 on Thursday. The Reds got a measure of revenge Friday thanks to Miley.

“It was fun for everybody to be a part of that game with the way Wade did everything tonight,” Reds manager David Bell said. “Obviously it starts with the way he pitched. Good cutter. Good changeup. Just his energy. Guys love playing behind him.”

Miley (7-4) struck out four and allowed seven hits and three walks. But he made it clear that his favorite part of the night didn’t involve his pitching.

“The triple,” Miley said. “I call it a triple. The triple was fun.”

Technically, it wasn’t a triple.

The only other run came in the fourth when Tucker Barnhart lined an 0-2 pitch from Brewers starter Eric Lauer (3-4) into the left-field corner for a two-out double that scored Eugenio Suárez from second.

The Brewers had runners on first and second with one out in the fifth when Miley went to his knees to field Lauer’s bunt and throw him out at first, preventing Milwaukee from loading the bases. Miley then got out of the jam by retiring Luis Urías on a fly to right.

“I overran it, and then it was just full panic to try to get an out,” Miley said. “I was able to kind of slide and get a glove on it, and (second baseman Jonathan) India picked me up big-time over there. I gave it everything I had to get it over there, but it bounced and India made a great play.”

Miley left after allowing a leadoff double to García in the ninth on his 104th pitch. Heath Hembree took over from there and struck out Rowdy Tellez, Jace Peterson and Omar Narváez to earn his fifth save.

Lauer struck out three, walked four and allowed four hits and one run in six innings. Over his last three starts, Lauer has worked 18⅓ innings while allowing only two runs.

“It’s been impressive,” Brewers manager Craig Counsell said. “He’s been big for us.”

The Brewers hurt themselves on the bases.

Peterson led off the seventh with a single but got thrown out trying to advance to second. An interference call on a slide to second by Willy Adames resulted in an inning-ending double play in the eighth.

Counsell said after the game that pitcher Freddy Peralta is replacing Brewers teammate Brandon Woodruff on the NL All-Star team. Woodruff is scheduled to pitch Sunday, which would have prevented him from pitching in Tuesday’s All-Star Game.

“It feels great, man,” Peralta said. “I was waiting for this moment. It’s a dream come true.”

Reds: Right-hander Michael Lorenzen struck out two, walked one and allowed no hits over two innings to earn the save for Class AAA Louisville as part of a rehabilitation assignment. Lorenzen hasn’t pitched for Cincinnati all season due to a shoulder injury.Counsell said the team will decide Sunday on the next steps for second baseman Kolten Wong, who went on the injured list July 2 with tightness in his left calf.

“It’s going to be strong workouts the next three days, test him pretty hard,” Counsell said. “Everything is going well. The anticipation will be if it’s not the first day after the (All-Star) break, it’s going to be very shortly after.”

Vladimir Gutierrez (4-3, 4.67 ERA) pitches for the Reds and Peralta (7-3, 2.23) starts for the Brewers in a Saturday evening matchup of right-handers.

Shaping the future: Look back at the Brewers' first-round draft picks under David Stearns' leadership

For the second straight year and fourth time in six drafts under president of baseball operations David Stearns, the Milwaukee Brewers chose a…

Milwaukee pitchers Corbin Burnes and Freddy Peralta and catcher Omar Narvaez had their struggles before becoming All-Stars this season.

Brewers shortstop Willy Adames and manager Craig Counsell talk with umpire John Libka during the eighth inning. Adames was called out at second base for runner's interference.