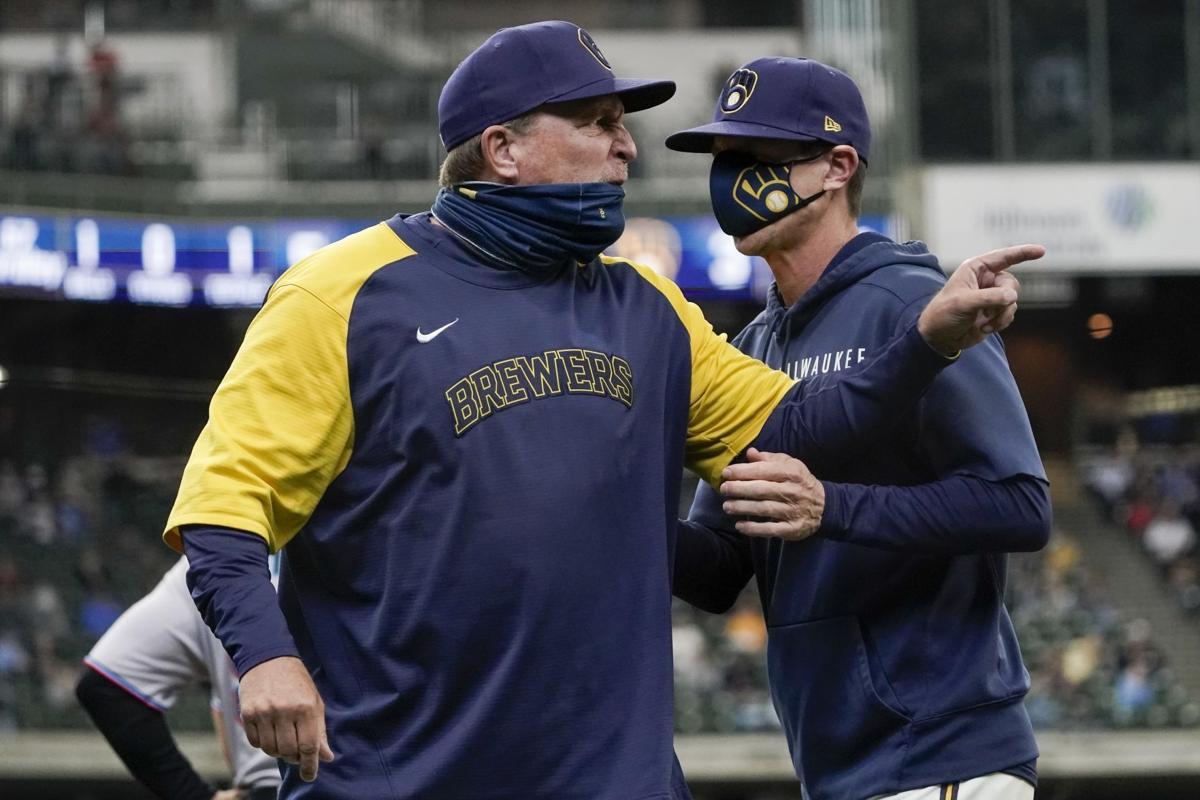 Brewers manager Craig Counsell holds back bench coach Pat Murphy as he yells at first base umpire Marty Foster during the fourth inning Wednesday at American Family Field. Murphy was ejected from the game. 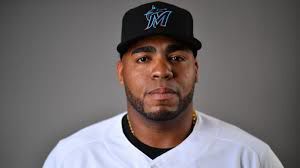 Aguilar homered for the fifth time in six games in a 6-2 victory over the Milwaukee Brewers on Wednesday at American Family Field. His tiebreaking three-run shot off Eric Yardley with two outs in the fourth inning put Miami ahead for good.

Aguilar, who played for the Brewers from 2017-19, went 4-for-11 with two homers, four runs and five RBIs in Milwaukee this week to help the Marlins win two of three.

His three-run homer increased his RBI total to an NL-leading 22.

The Marlins have needed Aguilar’s power to carry them at a time when injuries have decimated their lineup. Marlins second baseman Jazz Chisholm joined outfielder Starling Marte, catcher Jorge Alfaro and third baseman Brian Anderson on the injured list Wednesday.

“He swung the bat good all spring and started off the season good,” Marlins manager Don Mattingly said. “He had a little spell there where I think he got a little twisted and got a little turned in. He got himself straightened out, and since then he’s just been homering it feels like on a daily basis.”

With the score 2-2, Miami had runners on first and second when Miguel Rojas hit a comebacker to Yardley, who attempted to start an inning-ending double play. The Brewers got the out at second, but second baseman Kolten Wong lost control of the ball before he could attempt to throw to first.

Miami capitalized when Aguilar drove a 2-1 pitch over the left-field wall.

Alcantara (1-2) struck out four and gave up five hits and two runs in seven innings. Wong’s two-run homer in the third accounted for the Brewers’ scoring.

Milwaukee called up Zack Godley from its alternate site to make the start in place of left-hander Brett Anderson, who went on the injured list Saturday with a strained right hamstring.

He walked the bases loaded but got out of the jam in the third. He appeared to hurt himself on a bunt attempt in the bottom of the third but returned to pitch the fourth, only to leave the game with a bruised right index finger after walking the leadoff batter and hitting the next one.

Brewers manager Craig Counsell said after the game that Godley is heading to the injured list.

“Trying to see if it was something I could still pitch through, and at the time I felt like I could,” Godley said. “So, nothing was said. Then, once I got on the mound and started actually trying to feel the baseball and throw it, it was a different story.”

Godley also was at the center of a bizarre play in the second inning.

Miami had runners at the corners with one out when Isan Díaz hit a slow roller up the first-base line. As Corey Dickerson scored from third, Godley easily threw out Díaz at first.

But Díaz was awarded first base when first base umpire Marty Foster called Godley for obstruction on the play, a decision that brought Counsell out of the dugout to argue.

“There was no interference that ever happened,” Counsell said. “Zack never got to the dirt. He was on the grass the whole time, and, like, clearly on the grass.”

Foster told the pool reporter after the game that it was “clear-cut obstruction.”

The Brewers created a spot on the 40-man roster for Godley by designating right-hander Phil Bickford for assignment. They also optioned OF Corey Ray to their alternate site.

Counsell didn’t have a timetable on a potential return for Anderson. … Counsell said before the game that outfielder Christian Yelich hit in the batting cage Tuesday and would do so again Wednesday. Yelich hasn’t played since April 11 due to a lower back strain. ... Miami placed second baseman Jazz Chisholm on the injured list with a strained left hamstring and recalled Díaz. ... Miami outfielders Garrett Cooper and Corey Dickerson left Wednesday’s game early. Cooper had a sore left foot and underwent an X-ray that was negative. Dickerson had mild discomfort in his right groin.

Brewers manager Craig Counsell holds back bench coach Pat Murphy as he yells at first base umpire Marty Foster during the fourth inning Wednesday at American Family Field. Murphy was ejected from the game.