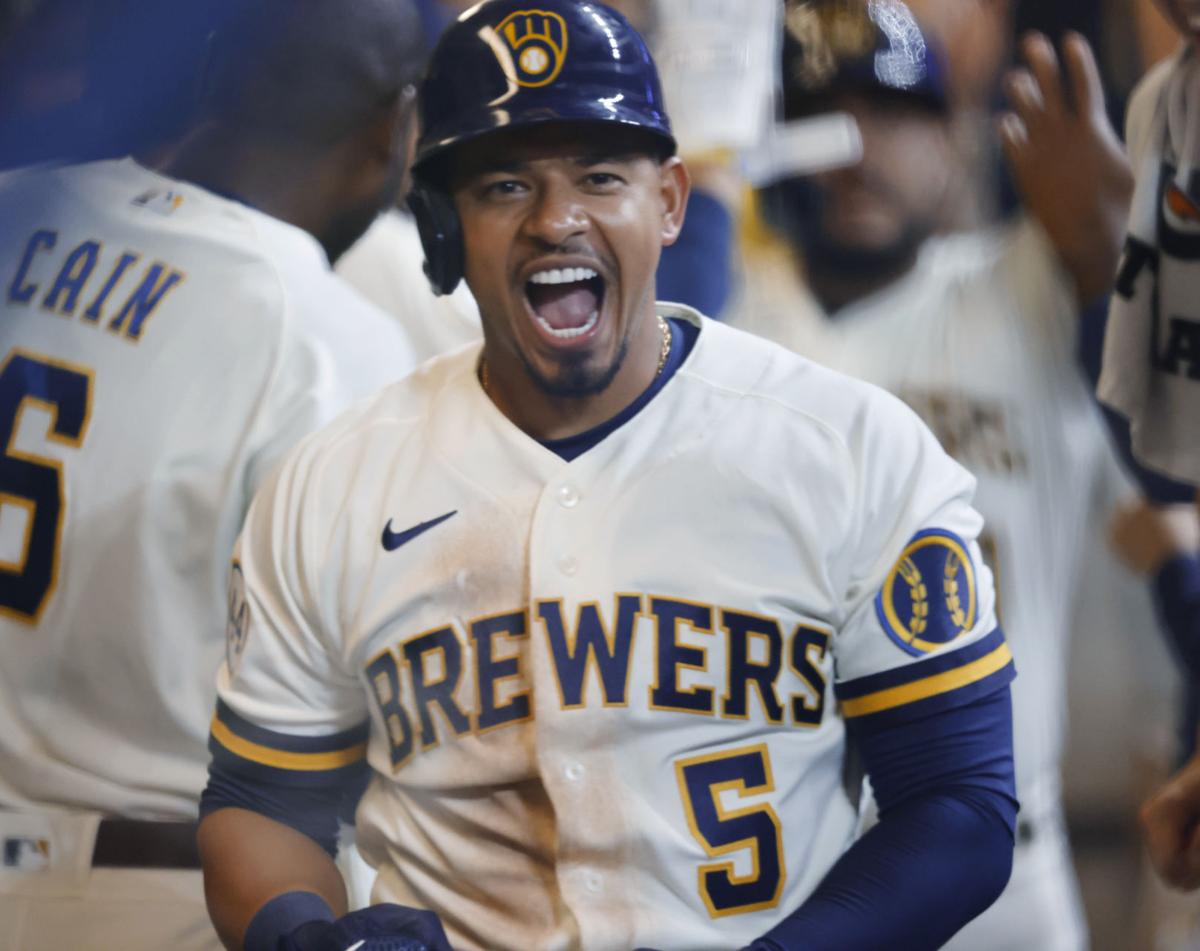 Brewers' Eduardo Escobar celebrates in the dugout after his three-run home run during the seventh inning Monday at American Family Field. 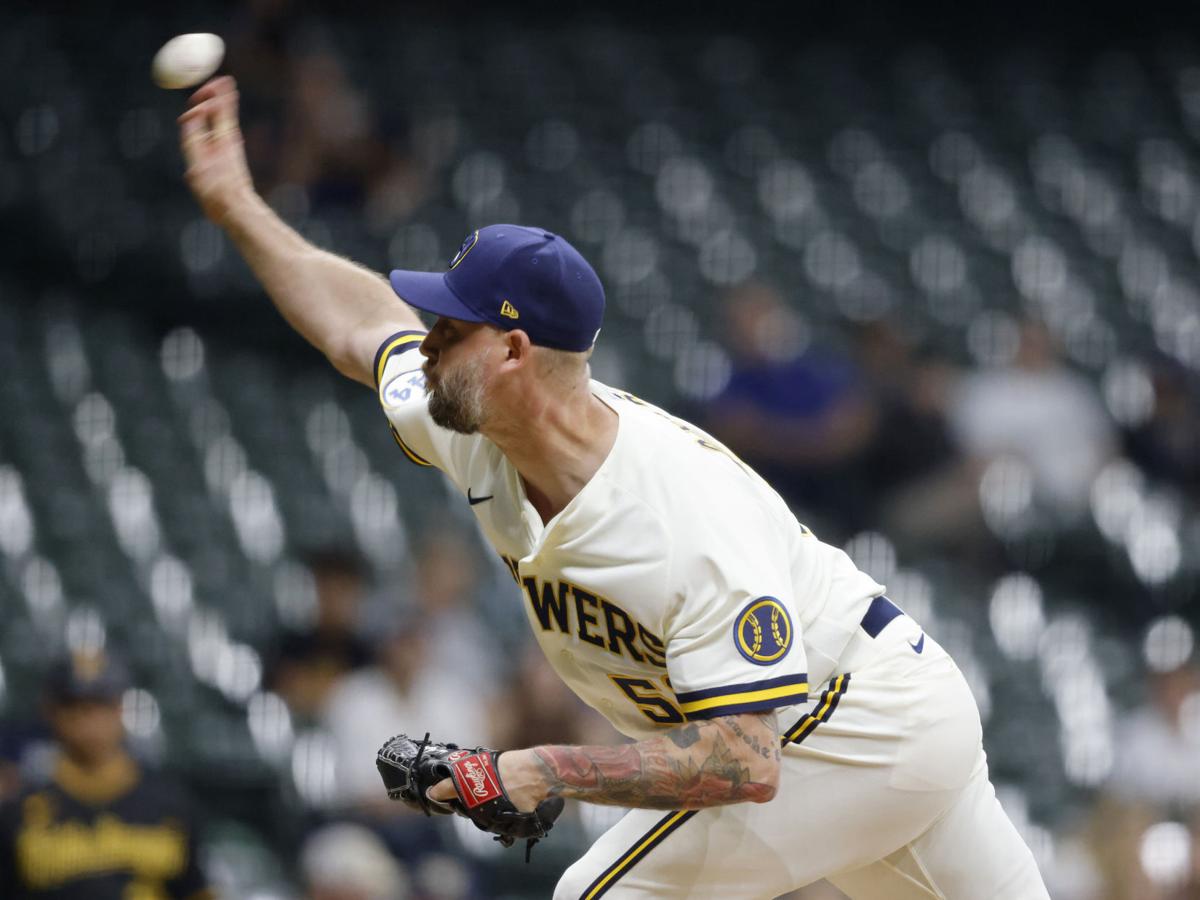 Newly acquired reliever John Axford hit a batter, gave up two singles and a walk and recorded one out in the ninth inning.

MILWAUKEE — Eduardo Escobar made one heck of an initial impression on Milwaukee fans in his first home game as a Brewer.

Escobar hit a three-run homer and an RBI triple to back up Eric Lauer's five shutout innings in the Brewers' 6-2 victory over the Pittsburgh Pirates on Monday night.

"I'm so happy to have a great game today because the people maybe saw me with different teams, but it's different when they see you with the home team," said Escobar, who came to the Brewers on Wednesday via a trade with the Arizona Diamondbacks. "I'm so happy I had a good game. I'm going to continue every day to come here with my best energy every day and help the team win. That's the most important thing."

Escobar's two-out triple off Kyle Keller in the sixth extended the Brewers' lead to 2-0. He followed that up by sending a 421-foot drive to right against Nick Mears in the seventh for his 24th home of the season.

He also walked twice to reach base on each of his four plate appearances.

"He adds a professional presence to a really good lineup already, from both sides of the plate," Pirates manager Derek Shelton said. "There's just a very calming presence for him when he's in the box."

The Brewers' victory had a bittersweet finish.

Milwaukee's John Axford entered the game to a standing ovation in the ninth inning as he made his first major league appearance since 2018, but he retired just one of the five batters he faced before leaving with an elbow injury that will require an MRI.

The Brewers had acquired Axford from the Toronto Blue Jays earlier in the day. He last pitched for the Brewers from 2009-13 and still owns the franchise record for saves in a season.

"It's unfortunate," manager Craig Counsell said. "The fact that he got himself back here was a real credit to him. You want the story to be good every night. Sometimes there's some unfortunate stories as well."

Pittsburgh trailed 6-0 heading into the ninth but brought the tying run to the plate after Axford and Brad Boxberger each issued bases-loaded walks. Boxberger ended the comeback attempt by striking out Phillip Evans to earn his fourth save in six opportunities.

Bryse Wilson (2-4) worked five innings and allowed just one run in his Pirates debut, but the Brewers feasted on Pittsburgh's bullpen after his departure.

Wilson came to the Pirates along with minor league pitcher Ricky DeVito in a Friday trade with Atlanta.

"Just trying to come into the new situation with a completely open mind," Wilson said. "Good restart. Good reset. Continue to improve my craft and just put the team in a situation to win every time we go out. It's been a good transition so far."

Lauer (4-4) allowed just three hits, struck out three and walked nobody. He also hit a batter. In his last six appearances, Lauer has given up only five runs over 31 1/3 innings.

"He's done a nice job for us all year," Counsell said. "He's been consistent."

The Brewers took the lead for good in the third inning. Lorenzo Cain led off with an infield single, stole second, moved to third on Lauer's bunt hit and scored on Kolten Wong's sacrifice fly.

Milwaukee broke the game open with a pair of two-out rallies against Pirates relievers.

The Brewers had two outs and none on in the sixth before Omar Narváez walked and scored on Escobar's triple into the right-field corner. Keller later walked Tyrone Taylor on a 3-2 pitch outside with the bases loaded to extend Milwaukee's lead to 3-0.

Mears' problems in the seventh started when Wong hit a one-out single that went off the right-hander's leg. Mears later gave up a the three-run blast to Escobar.

"It really wasn't the comebacker," Shelton said. "The comebacker hit him on the back of the thigh. He twisted his ankle on the way down, and that's what we were checking. The longer he was out there, the more it stiffened up. It was more that he rolled his ankle than it was getting hit by the line drive. As he retreated to field the ball, he twisted his ankle."

“So we tested him, and it came back positive,” Counsell said.

Brewers outfielder Christian Yelich and pitchers Jake Cousins, Jandel Gustave and Hunter Strickland already had been placed on the COVID-19 list over the last few days. The Brewers reinstated utilityman Jace Peterson on Monday after he had been sidelined due to contact tracing.

“The symptoms the guys are experiencing are fairly minor,” Counsell said. “We check in with them and have had no real health scares with them, so we feel like we’re in a good place there. Obviously, losing players fairly regularly hurts and makes it challenging.”

Counsell declined to say whether Hader was vaccinated.

Axford filled Hader’s spot on the roster after the Brewers acquired him from the Toronto Blue Jays earlier in the day. Axford pitched for the Brewers from 2009-13, but Monday marked his first major league appearance since 2018.

The three-game series continues Tuesday night with a matchup of right-handers as Max Kranick (1-2, 7.31 ERA) starts for Pittsburgh and Adrian Houser (7-5, 3.69) pitches for Milwaukee.

Brewers edge Braves to take 2 of 3 in series

Down 4-0 in first inning, Brewers roar back to beat Braves

Garcia has three hits, scores twice and knocks in a run during the 7-3 victory at Pittsburgh.

Pittsburgh scores five runs on three hits and an error to erase a 4-0 lead and wins 8-5 in 10 innings.

His three-run shot in the seventh inning is the difference in a 4-2 victory.

His single in the bottom of the 10th sinks the Giants.

Make or break: What to watch as the Brewers try to build on their NL Central lead

After dropping two straight to the National League-leading San Francisco Giants, the Brewers hit the road for an 11-game road trip Monday star…

Brewers' Eduardo Escobar celebrates in the dugout after his three-run home run during the seventh inning Monday at American Family Field.

Newly acquired reliever John Axford hit a batter, gave up two singles and a walk and recorded one out in the ninth inning. 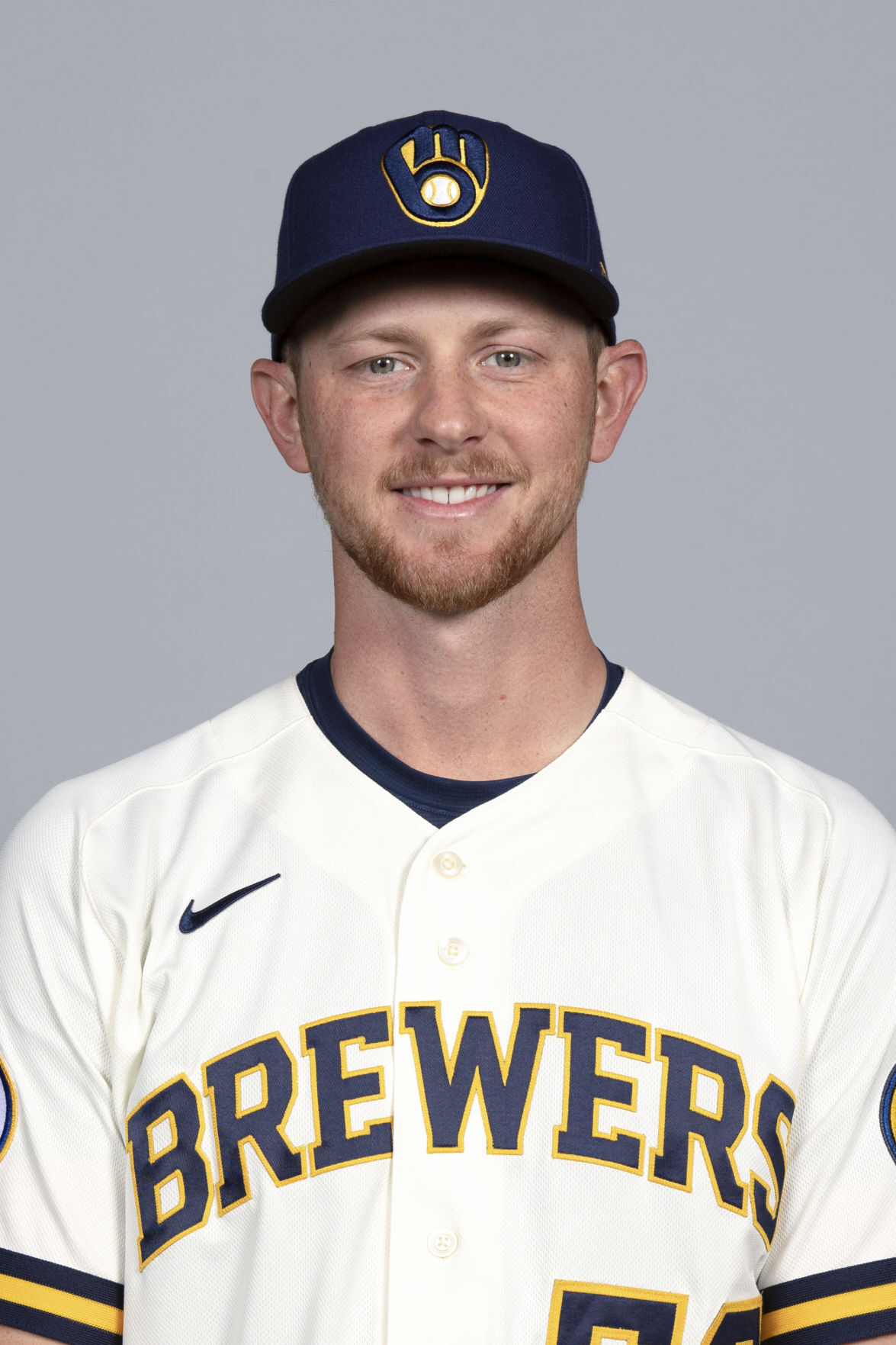